I was running water for the cows yesterday morning after milking–which is a lengthy process with big tubs and dry weather that has the cows trying to drink the water even while you’re filling the tubs–and kinda zoning out from boredom while making sure the cows weren’t knocking the hose out of the tubs, when I noticed a tan-colored calf wobbling in the midst of the big cows. I thought, vaguely, I hope Gingersnap isn’t getting sick.

Then I thought, did Gingersnap shrink?

Then I woke up and realized THAT’S NOT GINGERSNAP!

And ran back to the house while the cows promptly tossed the hose out of the tub and left it running on the ground (naughty cows!) to grab my camera. 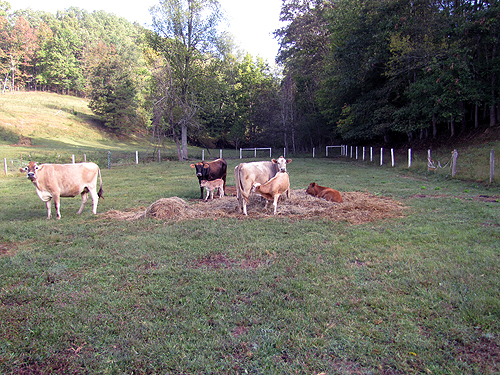 Yep, that’s NOT Gingersnap! (That’s Gingersnap, center, with Moon Pie, and Pumpkin lazing on the right.) That’s a brand new baby! Blossom finally had her calf! 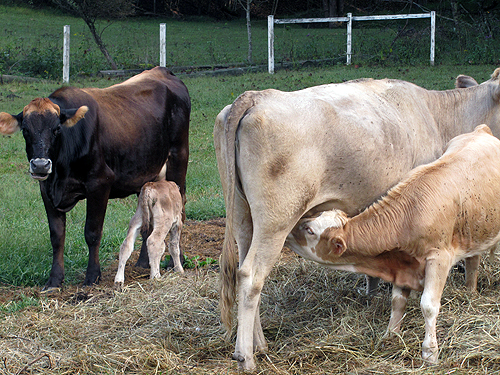 This is Blossom’s first calf. She has officially graduated from heifer to cow. We brought Blossom here in March from my friend Sarah’s farm. Blossom is a Brown Swiss/Jersey cross, and had been bred to a Jersey/Guernsey at Sarah’s farm so this is a full-on dairy calf. I was kind of hoping it would be girl since it’s full dairy, but closer inspection revealed it was a boy. My first bull calf! 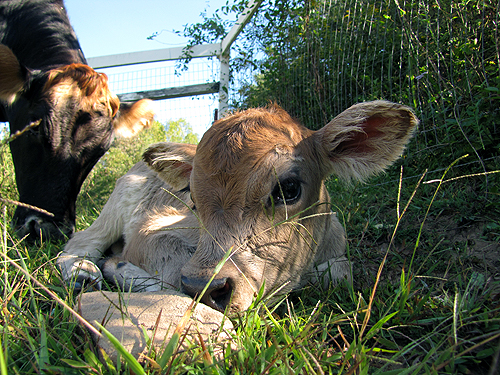 He’s cute as can be, but he was promptly “steered” in the right direction (banded) and named Taco, because he will make great tacos someday. It’s been a long run of girl calves here, since Glory Bee, the first calf I ever raised, was born in 2010. I’ve had nothing but girls, girls, girls–which is a good thing, but I’ve been waiting for a chance to grow a steer. And I’ve been waiting to see how Blossom does in the milking parlor. 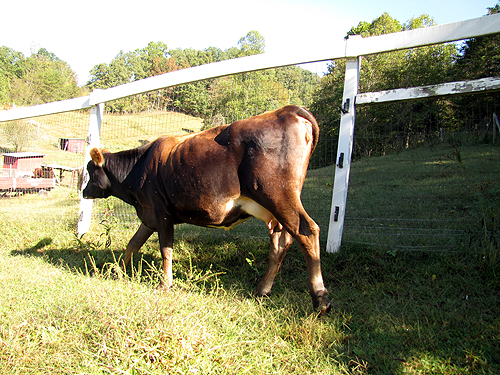 She has a similar personality to Moon Pie, who is a sweet cow in the milking parlor, much sweeter than spoiled brat Glory Bee, so I’m hoping Blossom will be the same. She’s been in the milking parlor in the headlock a few times already, but now her training will begin in force.

Blossom has a weird fifth teat, by the way. 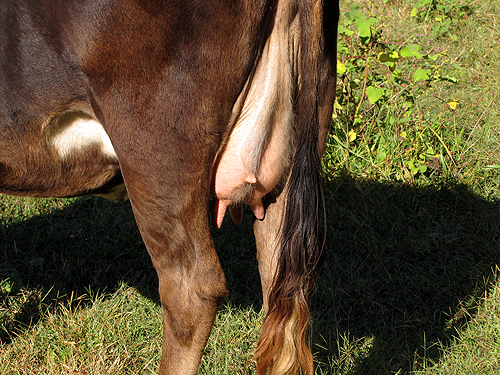 It’s not as uncommon as one would think. I’ve done a little research on it. Some people actually have them removed. They’re non-functional. Taco will figure that out the first time he tries to suck on it.

I moved Blossom and Taco immediately to the back barn yard (away from the other cows–and the chicken-eating pigs), which made Glory Bee jealous. 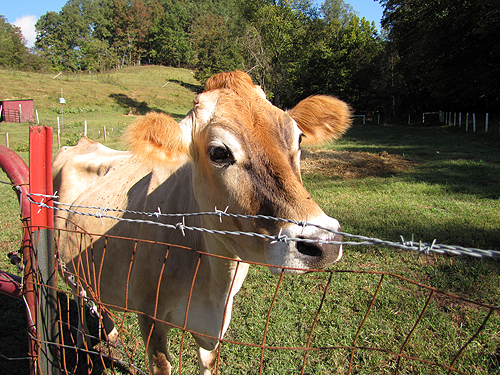 But it’s not her turn right now. It’s Blossom’s turn. I can’t wait to try her out in the milking parlor! 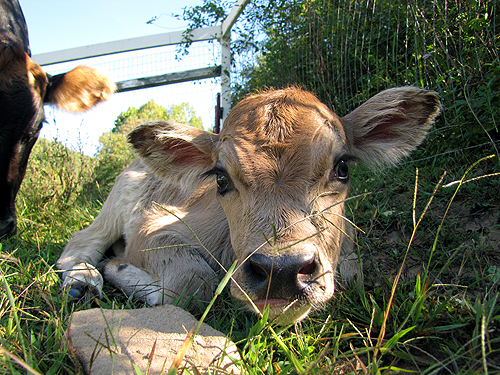 Taco will probably be here for about two years before he heads for his final destination (the freezer), and cute as he is, his name is a reminder. A farm has a purpose in the pursuit of self-sustainable living, and while looking into the eyes of your food isn’t easy, it’s real. The hamburger meat found in neatly wrapped packages at the store start out as cute calves, too, and they didn’t live the happy, spoiled life that Taco will enjoy–as is his due, in gratitude for his role. So cheers to Taco–my very first steer!