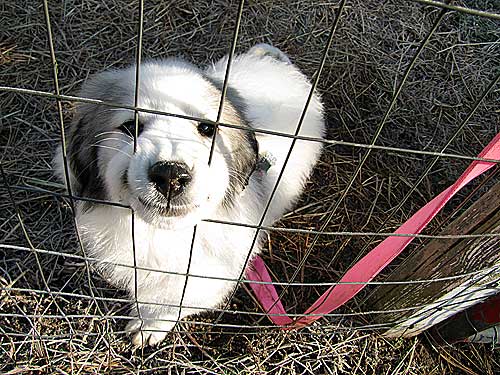 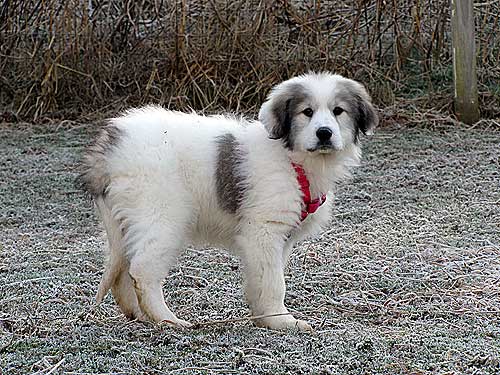 Great Pyrs may be all white, but they may also have markings of badger, gray, or tan. Coco has badger markings, which are easy to see here in one of her puppy pics. 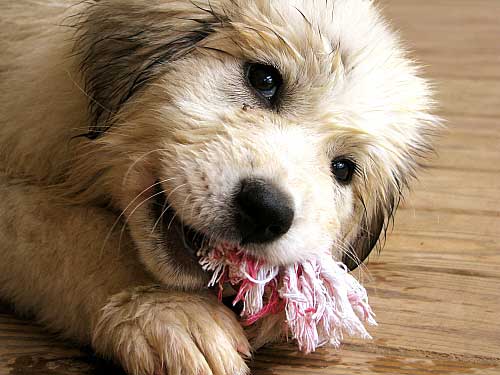 Her markings became less visible as she grew, mostly just a hint of color at her ears. 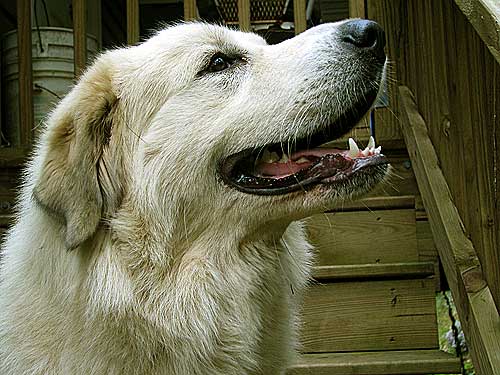 Chloe has more pronounced badger markings, so hers will likely remain more visible as she develops. I have a preference for badger markings in Great Pyrs. I also have a preference for females. I discussed the situation I would be bringing her into with the breeder, and was assured that if I introduced them properly, there should be no reason they can’t bond and work well together, especially since they will both be spayed females, which reduces competitiveness. (Coco is already spayed, of course.) It’s important to provide a companion for Coco as quickly as possible for her overall contentment once she is back at home–and can no longer hang on the porch. (Unfortunately, Casper is not a suitable companion in the field due to his behavior around the other animals.) The most critical element is for Coco to re-establish her turf with security and confidence then have the pup brought to her as a supplicant. 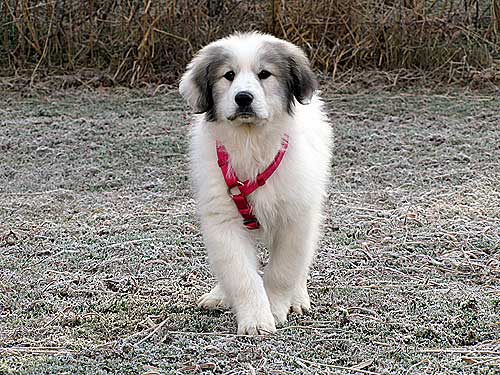 I have several goals for Chloe that I’ll be working with over the next weeks and months. I’m not a believer that LGDs should not be bonded with both family and flock. It’s the balance that’s important. First, I need Chloe to bond with me enough to obey me. I also need her to walk on a leash, and to clamber willingly into my car. She needs enough attachment to me to cooperate with me. I kept her in the house last night, and started leash-training her as soon as we got her home.

Chloe sitting soulfully by her leash, which is clipped to the goat yard fence, already associating the leash with something good–a walk with a Person! 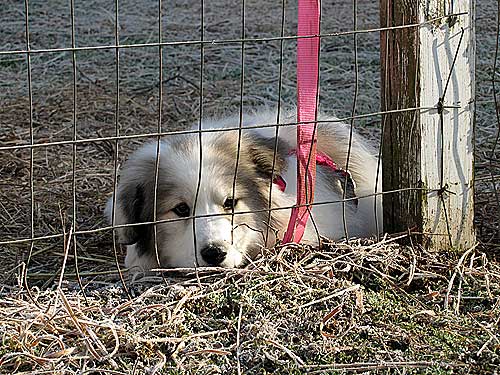 Coco runs away if you so much as pick up a leash in her presence, and she generally resists getting into vehicles. These are failures on my part, and through Chloe, I hope to gradually do some remedial training with Coco. By instilling a better balance with Chloe in her attachments and behavior, and bonding her carefully with Coco, I’ll have an opportunity to come in the back door with Coco a little bit, and hopefully gradually change her attitude on a couple of issues. I won’t always have Morgan here with me to help me get a big dog into a car.

Chloe needs, of course, to start developing her relationship with the sheep and goats immediately. I took her to do chores with me this morning, making introductions at the fence line to these scary characters. 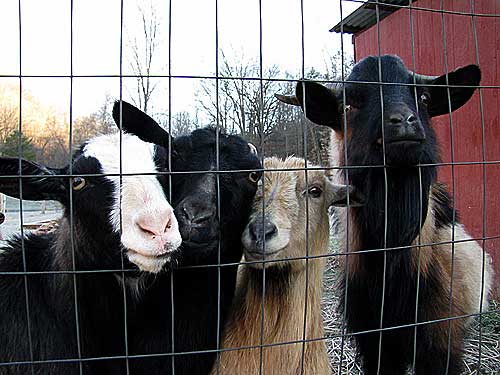 It’s a little intimidating in there for a puppy. 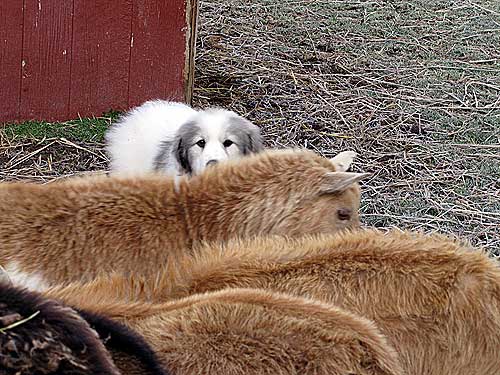 She’ll start now spending most of her time with the goats, but I’ll continue taking her on walks, or just to do chores, on a leash. 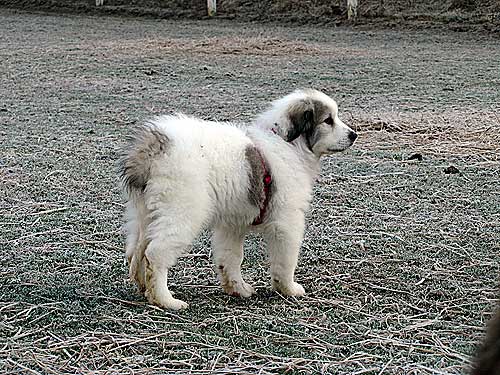 My goal is to get her to look forward to something fun when she sees a leash, and also to jump voluntarily into my vehicle. Morgan is starting track soon, which is a simple there-and-back for pick-up, and I’ll be taking Chloe. 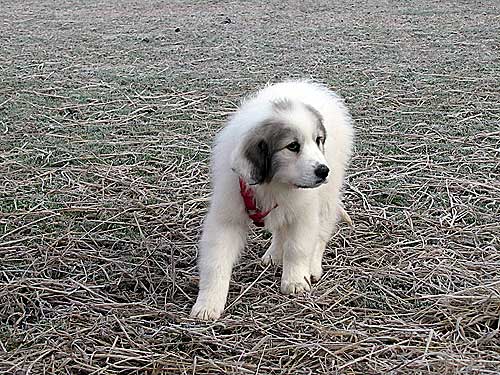 When Coco returns, the scenario will depend on the variables involved regarding the timing and the status of Coco’s healing. She will, no doubt, be immediately aware of the puppy’s presence on the farm, but I will not bring Coco into a field with the puppy but rather bring the puppy to Coco’s field, and only put them together once Coco is back on all four feet. The details will depend on the variables, but affirming Coco’s dominance–both to Coco and to the puppy–will be crucial in their successful working relationship. 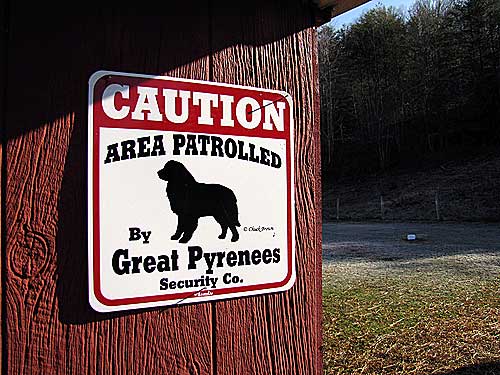 In the end, the goal is to have two happy LGDs in the field, working well together, content, and cooperative with their human when I need them to be. The puppy can learn a lot from Coco, but if they bond well, Coco can learn something from the puppy, too. And right now, while it may still be a week or even two before Coco can come home, it gives me some time to work with Chloe separately and establish some parameters.

It’s also a lot for a puppy to take in all at once, so it will good for her to settle down in her surroundings before meeting the Queen. 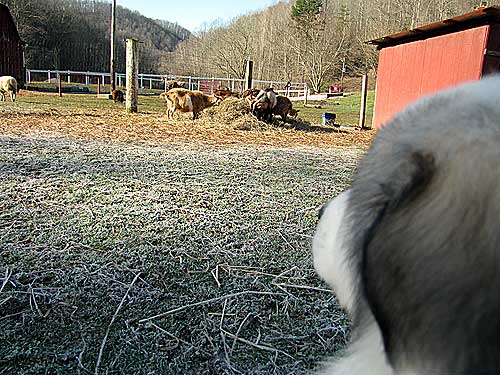 Imagine being a puppy and meeting so many strange “people” at one time. 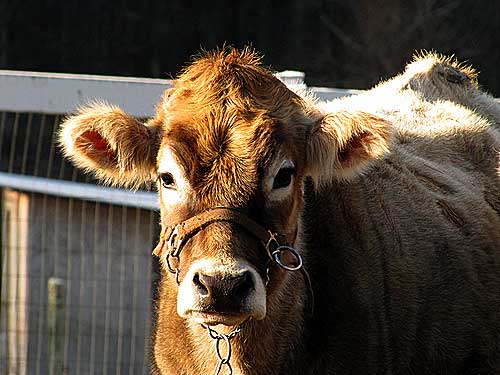 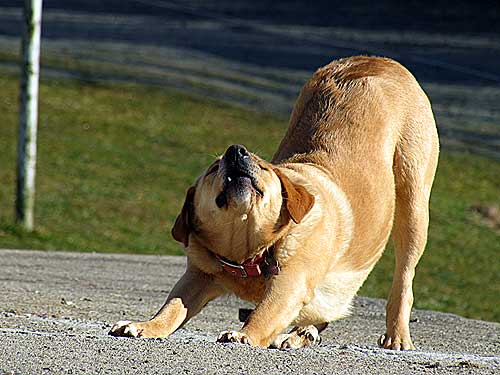 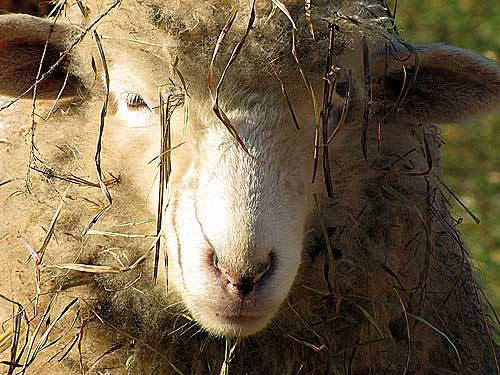 Casper did fine with the introductions, by the way. He won’t be spending a lot of direct time with the puppy, but he didn’t seem to mind her too much. Maude was pleased with the puppy’s arrival as it took all the other cats’ attention off of her. 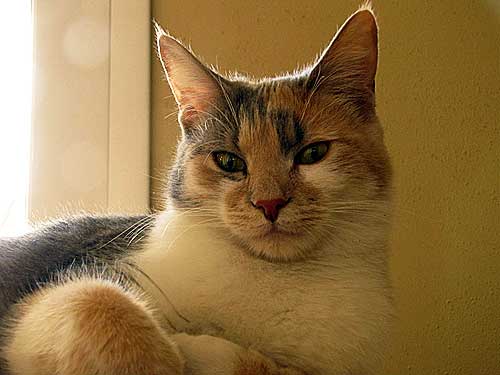 I let Morgan stay home from school and go with me to pick up Chloe. After a distinctly traumatic experience the past couple weeks, it was a much-needed bright spot. 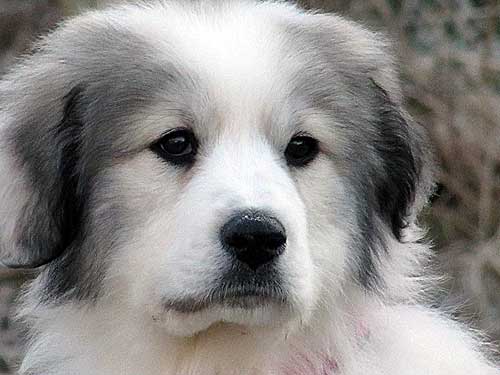 While there is a lot of work to be done, sometimes you just need to stop and smell the puppy breath. A puppy doesn’t come along very often. I intend to enjoy it.