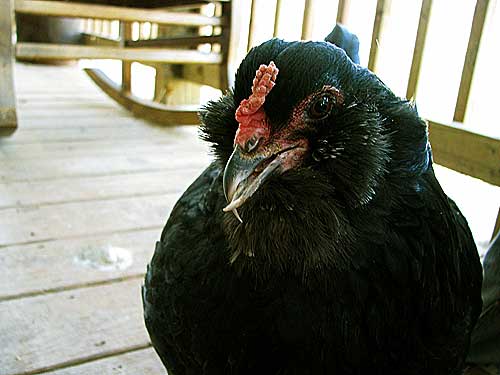 This weekend, I picked up the Crooked Little Hen’s boyfriend, Mr. Hyde, and took him to the chicken house. “No more pooping on the porch, Mr. Hyde!” I said. And I plopped him down behind bars to join the rest. A group of chickens has been living in the chicken house and chicken yard for about a month. They decided they didn’t want anything to do with winter anymore and they holed up, waiting for it to be over.

Another group of chickens roosts out at night. They refuse to go back to the chicken house. They’re free birds and they won’t be fenced in! They’re rebels. They roost on the goat pen gates and sleep with Clover and Company. And then there’s the Crooked Little Hen and Mr. Hyde, roosting on the porch.

Well, I showed Mr. Hyde. I put him in the chicken yard. He paced back and forth at the fence line and he crowed and crowed. But he couldn’t get out.

And by the next day, the roosters in the chicken yard had nearly killed him. I thought he was dead. And it was all my fault! I had put him in the chicken yard! I had make the mistake in judgment that he was top rooster and those other chicken house roosters wouldn’t dare touch him.

Maybe they saw him crying about the Crooked Little Hen. Maybe he admitted he missed her. Maybe he even told them he loved her. Maybe they thought he wasn’t tough enough to be top rooster anymore.

I found him in a lifeless heap, his beak pressed into the corner behind the feed box. His feathers were soaked in blood. I picked him up, not even sure if he was still alive. But he was! 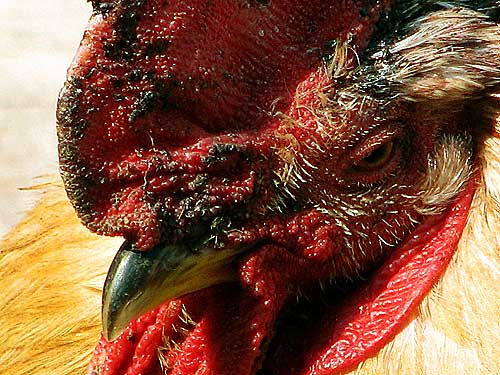 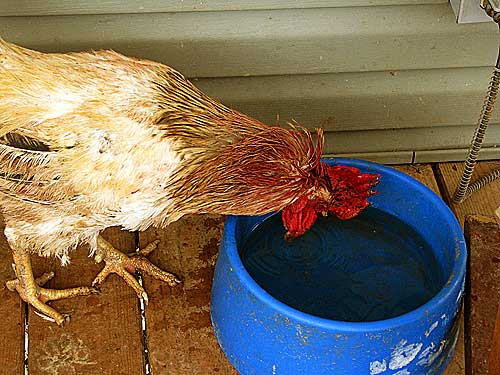 He drank some water and pecked some stray dog food off the floor. 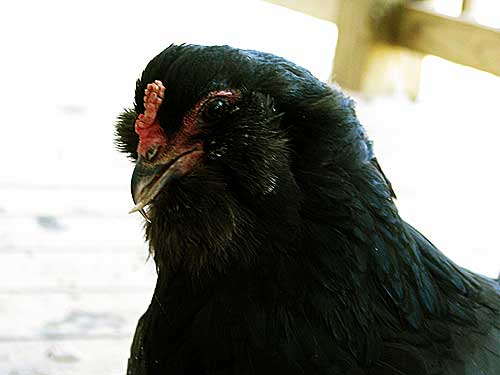 And then he bowed his head in front of the Crooked Little Hen, ashamed of his condition from the tip of his bloody comb right down to his droopy tail feather. 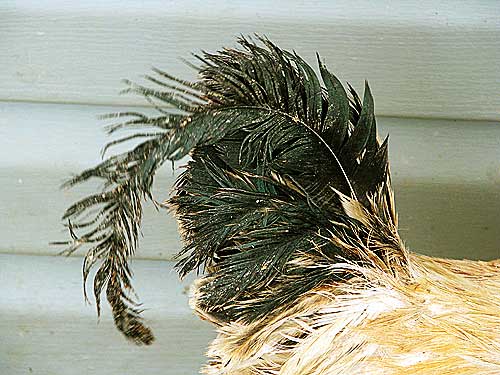 “I’m not beautiful anymore,” he said. 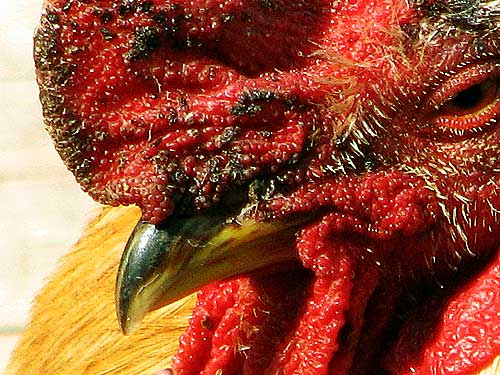 And the Crooked Little Hen…. 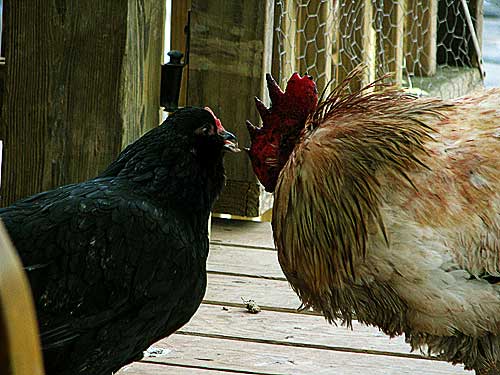 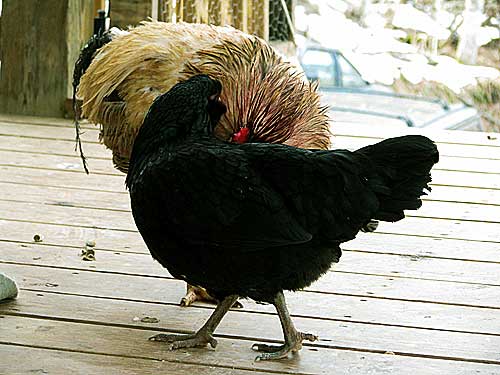 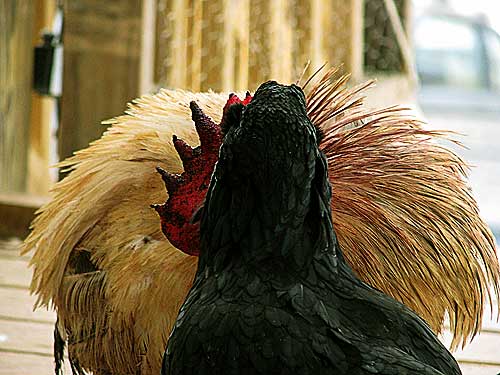 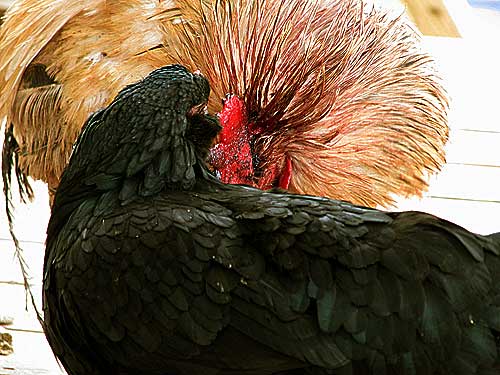 For hours. It was one of the most amazing animal incidents I’ve ever seen, the way she cleaned him. 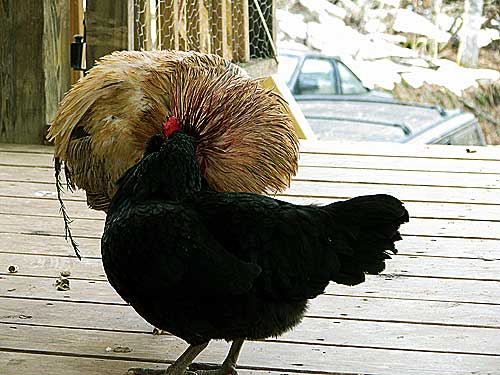 She preened his every feather as best as she could. 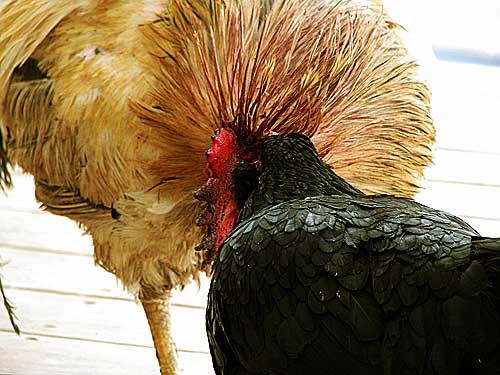 And when she was done, he puffed out his chest and then he saw it. He saw that his tail feather still drooped, and he knew there was nothing anyone could do. 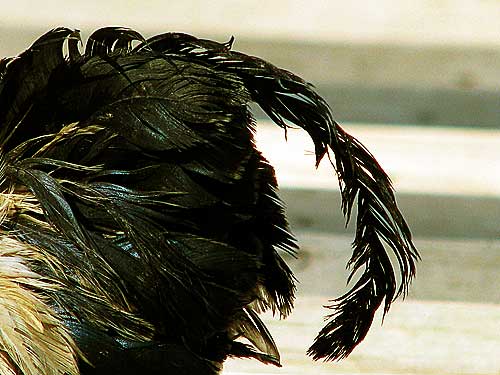 And he said, “How could you ever love me now, Crooked Little Hen?” 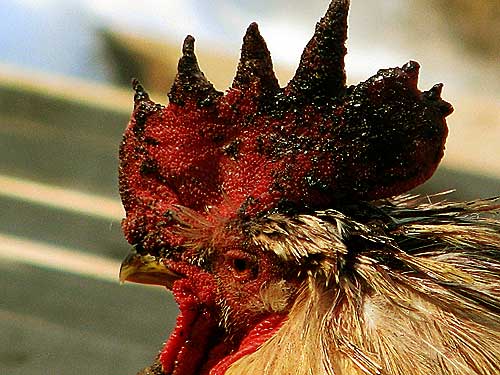 But the Crooked Little Hen told him what she has always known. 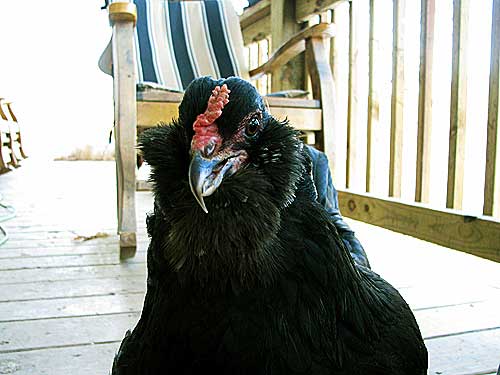 “Beauty is on the inside, rooster.”

And they lived happily ever after. At least until I think of a way to get rid of him that won’t kill him.