It was over two years ago when Beulah Petunia became my cow. I milked by hand for a year then I milked after that with a milking machine. I have milked under various adverse circumstances. I milked in the meadow bottom, crossing a creek with my pails of feed on the way there and milk on the way back. I’ve sat in the middle of a dirt road on an overturned bucket pouring milk into quart jars so I could drive it back up to the house on the steep, rutted driveway. Once I got a milk stand up at the top near the house, it quickly turned into a mud pit because it was built at the base of a ravine in the hillside. I’ve carried my milk bucket in mud that sucked the boots off my feet. Eventually, I abandoned that milk stand to milk anywhere but there. I’ve milked outside in the rain and the snow with BP not even tied to a post. I’ve milked with chickens, goats, sheep, and donkeys nosing in on the business, and I’ve milked with one great big bad baby fighting me for the teats. I’ve seen BP pick up a milk stand and walk off with it around her shoulders.

I’ve milked uphill both ways, so to speak.

Over the past couple of years, I’ve spent a lot of time thinking about my ideal milking parlor. I want a weather-protected parlor. Dry, under roof. Sheltered from the worst of the cold, from snow and rain and wind, and shaded from the heat. But I want light–light I can turn on with a switch. I want access to water in case I need it. I want an outlet for my milking machine. I want secure milk stands with posts set in concrete. I want feed boxes that are secured so they can’t be moved by the animal during milking. I want NO CHICKENS or other animals in the parlor. I want shelves where I can put things up off the ground, and hooks to hang things. I want the parlor located conveniently to the animals with easy access–and not far from the house, either.

I want the milking parlor I have now!

Here, the cow (whichever one I’m milking) can be brought in this door from the back barnyard. 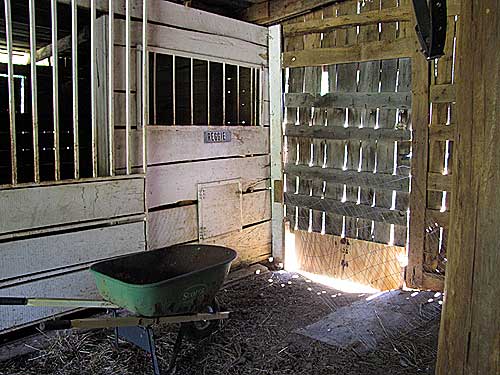 From there, it’s just a few steps to the milking parlor. 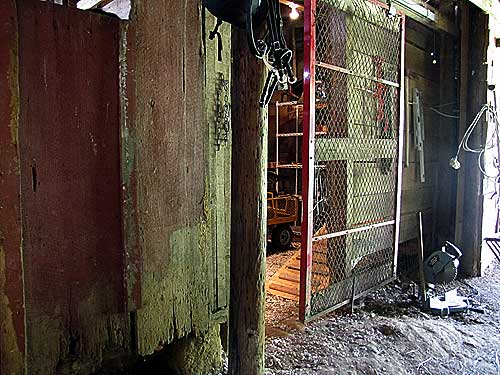 The goat stand has a ramp for the goats to clamber up. The headlock has a feed box. 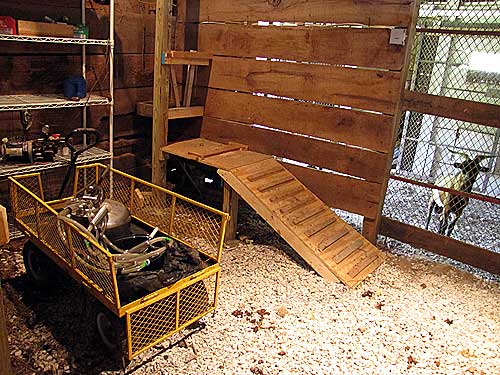 There is a hook for tying a leg, if necessary. Between the headlock and the hook, the goat can’t move off the stand. (It’s Cookie Doe-tested.) 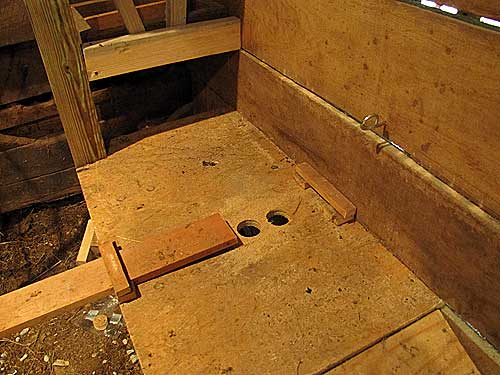 This piece of wood slides out to reveal two holes. The stand is up high for the milking machine. The inflations can be poked up from the bottom to hook onto the goat. The wood cover for the holes is to keep the goat from stepping in the holes when they get on the stand. Only after they’re in place is the wood removed and the inflations brought up. The wood piece can be replaced when milking is done before the goat gets off the stand. (The holes still need to be tested for size–I don’t have the inflations yet. When I get them, we’ll see if the holes need to be enlarged or not. I didn’t want to make them bigger than necessary, so we’re waiting to fine-tune on that.)

Here, Cookie Doe was being measured to fit the milk stand to a Nigerian Dwarf. 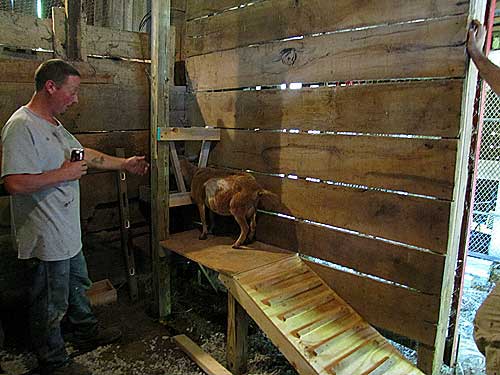 Glory Bee was brought in for measurements for the cow milk stand. 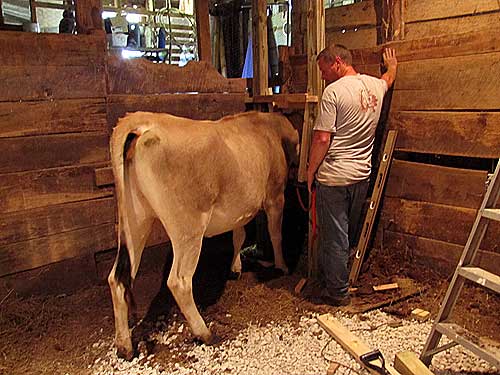 Pictured–Adam with Glory Bee. Adam is here doing some work in the barn and the fields for me. He was in charge of re-coating the barn roof, then he did some other odd jobs around the barn (such as working on the electric), built the milking parlor, and next he is going to work on my field across the road to repair the fencing. There is a good creek with more water in it in that field, so I need to get it ready for the horses this summer for when I have to take them down off the upper pasture when the creek there is too dry. Adam has worked with milk cows all his life, which is why I chose him to work on my milking parlor along with some other barn and field work. He understands cows, and Glory Bee likes him.

Adam bringing Glory Bee up out of the field: 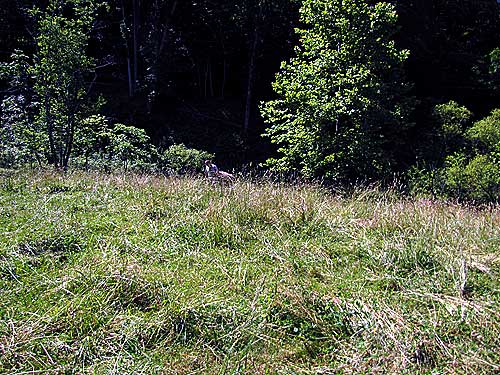 He also works on SarahGrace’s farm, where Glory Bee and BP were for two months this spring to (hopefully) get bred, so he spent some time with Glory Bee there.

Taking Glory Bee back after measurements: 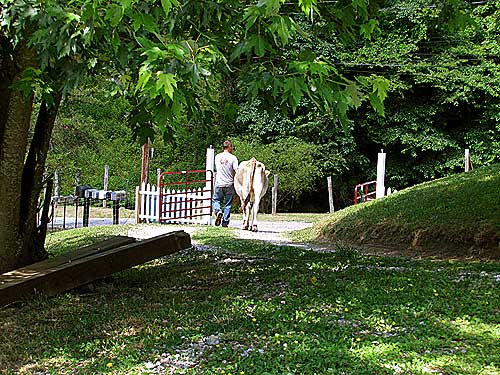 Glory Bee is a little bit bigger (taller) than BP. BP is a Jersey, and Glory Bee is half Brown Swiss, which is a slightly bigger cow. The stand was measured to be sure to fit Glory Bee properly since she is the one I will likely be milking the most and the farthest into the future. (The stand will also fit BP, but making sure it wasn’t built too small for Glory Bee was the critical part.)

No cow will ever pick this milk stand up around their shoulders and walk off with it. The posts are set in concrete. 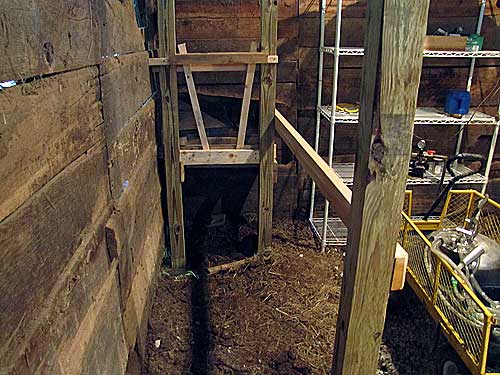 Chicken wire around the tops of the milking parlor keeps chickens out. There’s a set of shelves for anything I need to put up. (Morgan brought her saddle in here since this is the chicken-proof room in the barn now. I’ve got the vacuum pump on a shelf, too.) I brought the milking machine in on the cart and fired it up to make sure everything was in working order and that it wouldn’t overload the circuit. (I had had the barn wiring redone, so I was just checking.) 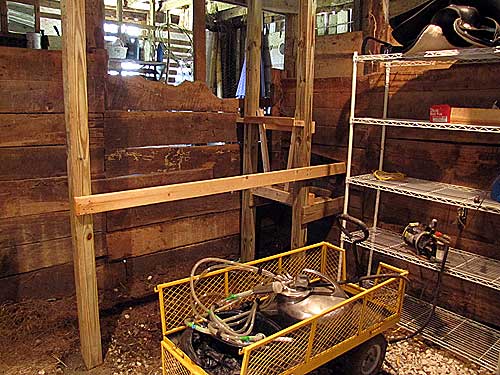 There is a water faucet just outside the barn door. Everything on my dream milking parlor list is here. In fact, it exceeds my fantasies since it’s also inside a big red barn.

This milking parlor is so wonderful, it makes me cry. 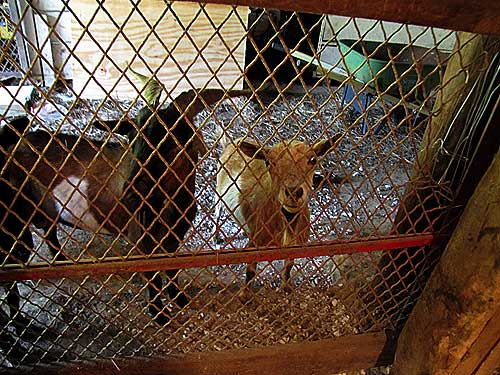 I stand in this milking parlor and all the hard times and hard ways I’ve milked run through my mind. Despite it all, I kept at it–because I love keeping a milk cow and providing for myself. Milking a cow is one of the most satisfying acts on a farm. I miss it–and I hope my cows are pregnant. (It’s too early still to have them preg checked.) Meanwhile, I’m going to get some goat-sized inflations to hook up to the machine for Cookie Doe and milk her. (I see a battle coming since the last time we discussed it, she threw her Sassafras Farm ID badge in the trash.)

But I have a new milking parlor. A real one. 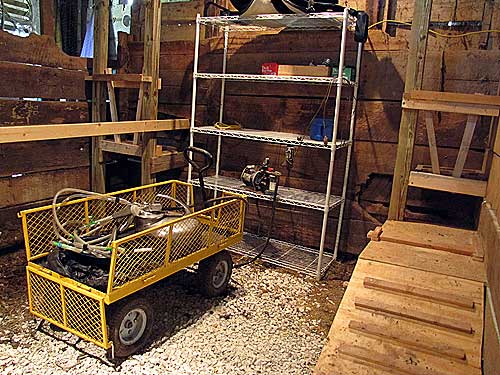 And I can’t wait to use it!

P.S. Want to add that my goat stand, set up for the milking machine this way, was inspired by Shelley at Twiggity Rusticks. If you check out her blog, you might find pics in there somewhere of her goat stand setup.