People ask about Dookie periodically because he isn’t seen on the blog very much anymore. The reason for that is because Dookie stopped leaving the porch much in the past year. He turned 15 this year. He started life a pampered Florida dog, riding around in his owner’s car in the suburbs. Then he became a young woman’s dog. Then he became 52’s dog. Then 52 gave him to Morgan, and he became a farm dog. He was scared of lightning and gunfire, and always wanted in the house if he heard that, but he wasn’t scared of anything else. He had his spring clip a few weeks ago, and had to have it at the vet’s office instead of at the groomer’s because of his age. There was nothing wrong with his health, other than the frailty of his years. He wasn’t seeing as well as he used to, so leaving the porch was confusing for him, plus the porch steps were difficult, so he just quit going out, spending most of his time on his blankie. Yesterday, he died quietly in his sleep. He had a good, long dog life.

In Dookie’s honor, here is one of my favorite stories, and one that showcases his character at a time when he was still able to be himself. 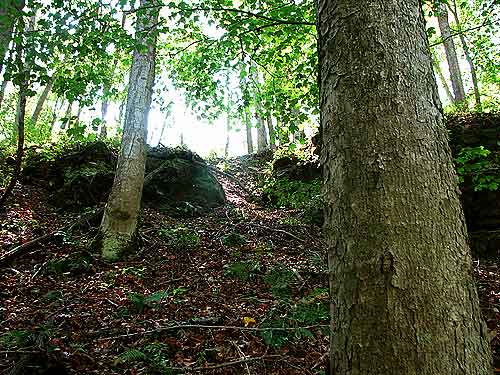 See this steep hillside? Our house is up there. Way up there. The river is way down here. We’re quite safe from floods. However, we’re not exactly handy to the river. Well, relatively speaking. The river is a short walk away–down the driveway and out the road about a one-minute stroll. The river ford allows a public access point and there is a swimming hole nearby with a rope tied from a tree. The kids love to play there. But for a property that actually borders the river, our direct access from our own property seemed somewhat impossible. Unless you like sliding down steep hillsides.

Or clambering off cliffs. 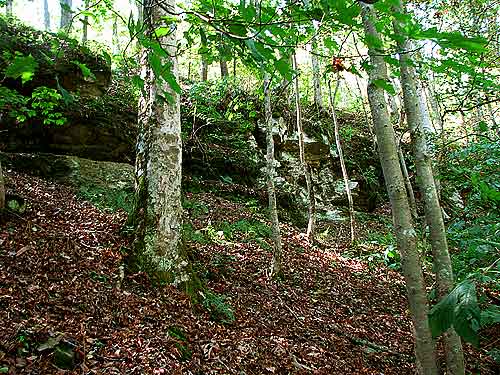 The part of our farm that borders the river is at the bottom of this cliff. The river makes a bend here, comes alongside our farm, and carries along the border of our property for some way–and all of that way, it’s straight uphill to our house.

Then we pushed through some brush toward the bottom of our driveway and discovered this. 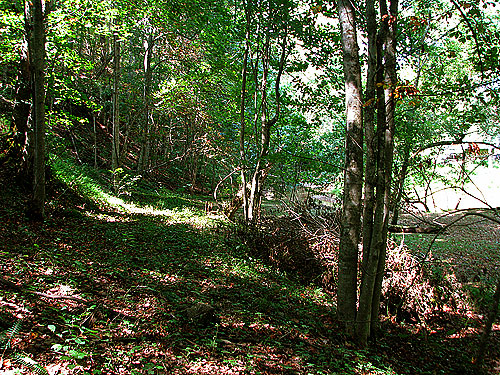 Following this logging trail at the base of our cliff, we found the metal pins that mark the property line all the way around our farm. The pins are laid out to the side of the trail, giving us just enough space to walk along the bottom of our hillside and reach the river, directly from our farm. 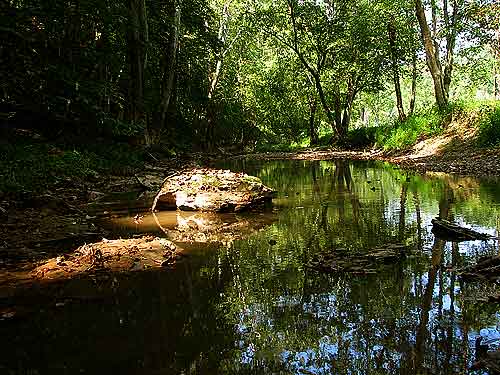 The Pocatalico is not a big river. It’s a river based on length, not width. In many places, it looks like a creek. I sat down on a rock to take in my newfound view. With summer fading fast, I will miss this lush green soon. Look at me–I even wore my boots. For once. 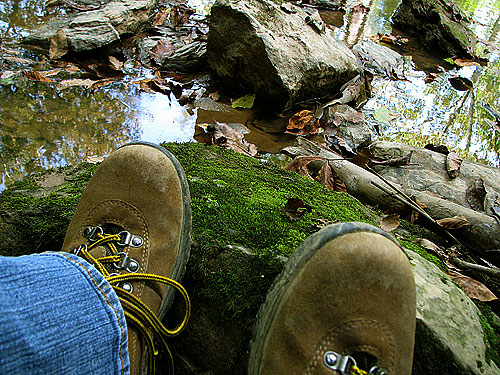 I sat there watching the leaves falling on the water in the light breeze, enjoying the peace and the quiet and– 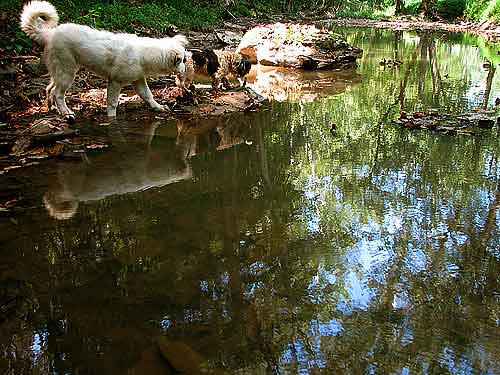 You can’t go to the river without dogs tagging along.

Coco hasn’t quite figured out this whole water thing yet. 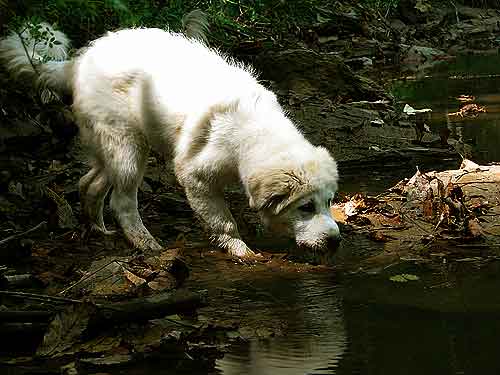 Is it a giant mud puddle? Will it suck her under? Will it attack? 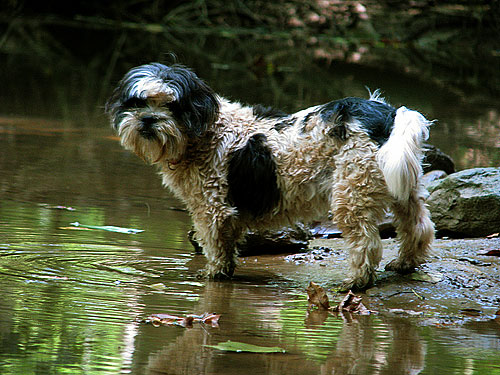 And he jumped right in. 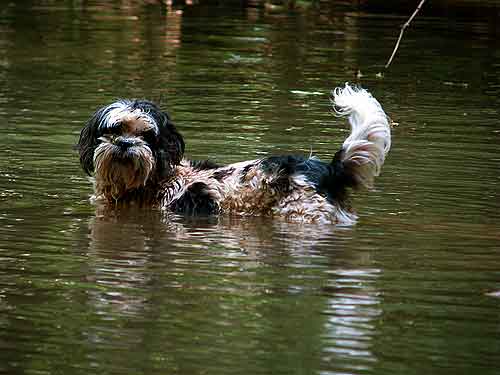 Coco was so distressed, she didn’t know what to do with herself. 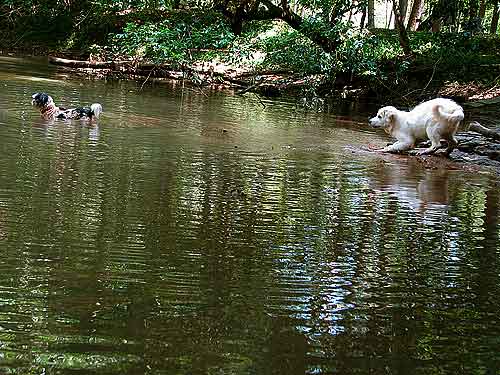 “Come back, Dookie! Come back!” 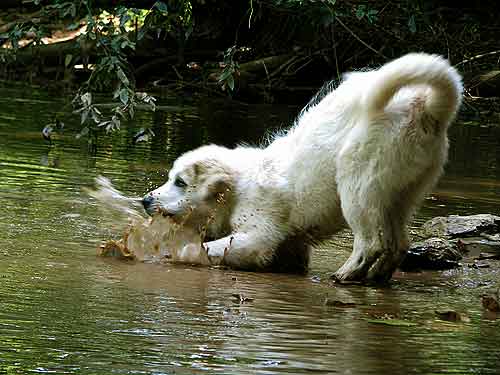 Dookie: “Now do you see what I’ve been telling you? I’m better than the giant puppy. I’m the top dog. I’m the king of the world!” 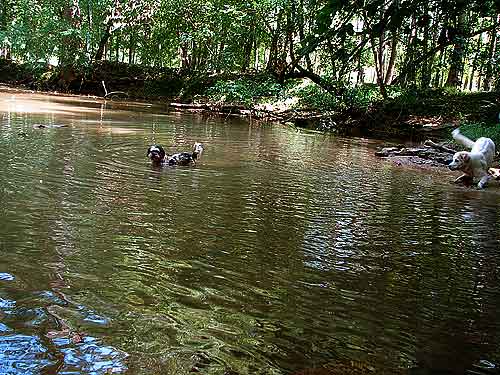 After he was done showing off, Dookie slopped back ashore. 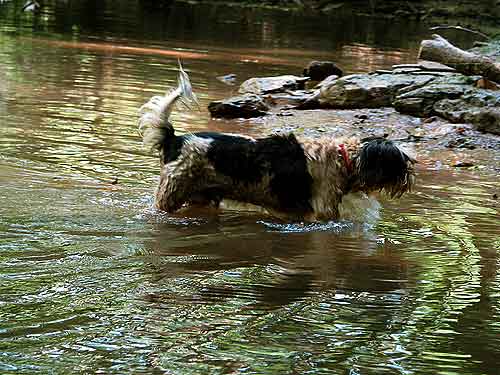 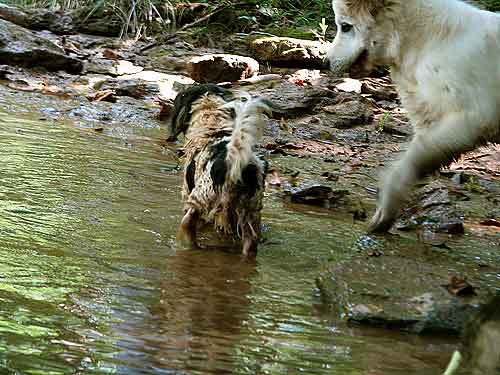 She was so happy to see him alive and on land again, she tried to bite his neck. 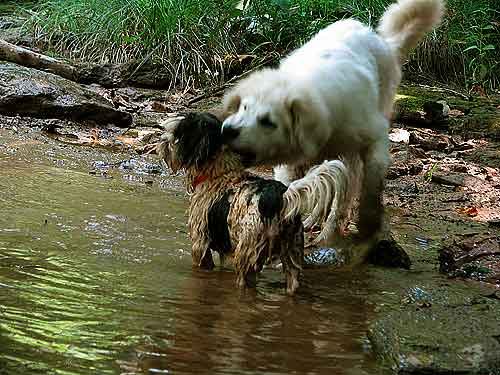 To show her love. 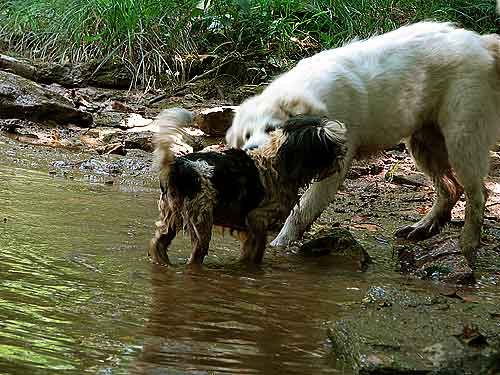 Which explains a lot about their relationship. That, and the way Coco likes to wake Dookie up in the morning (er, noonish, Dookie likes to sleep late) by picking up the corner of the blanket he sleeps on in her teeth and dragging it off, dumping him unceremoniously from his bed.

Still, they have their moments of bonding. Mysterious moments when they speak dog to dog.

Dookie: “I’ll teach you all about the big water, grasshopper. Stick with me.” 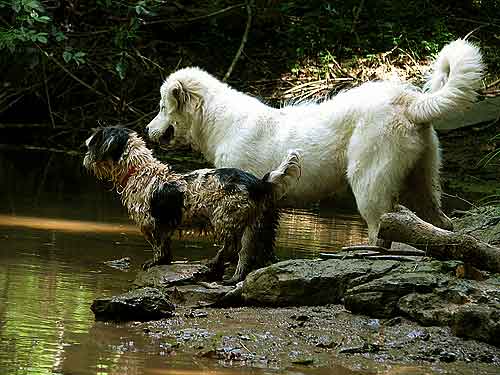 “You gotta start small,” he told Coco as they walked away from the river. 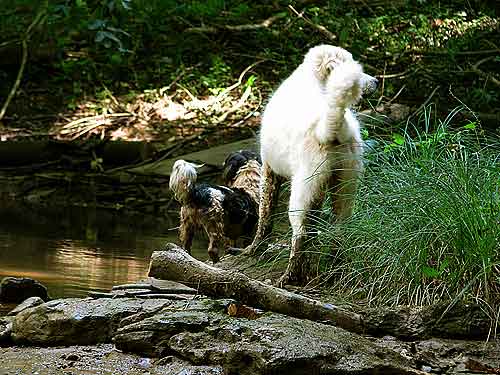 “Like with this little creek here. Go ahead,” he told her. “Jump in. Run up and down the creek two hundred times and you will defeat the water and have power over it, like I do.” 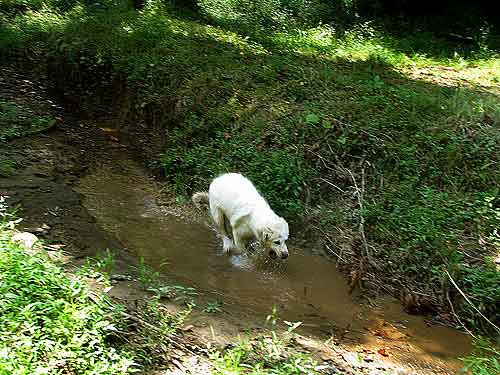 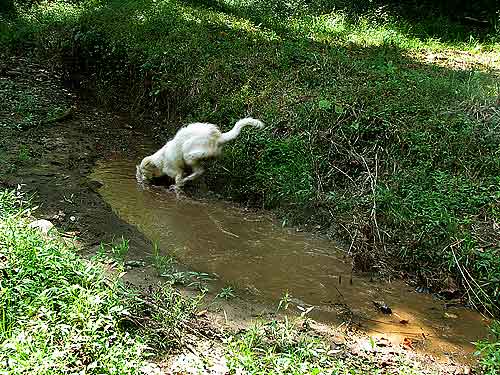 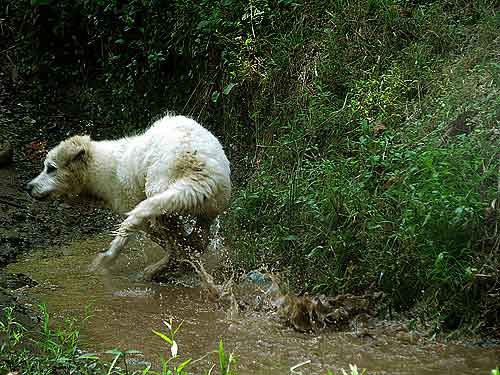 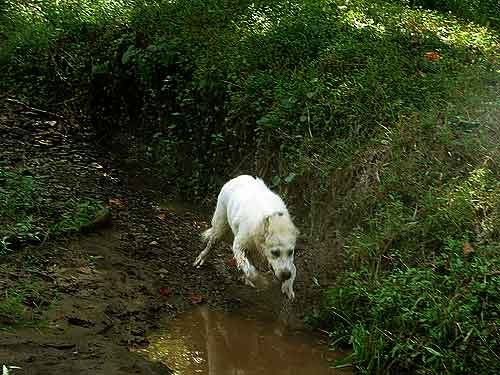 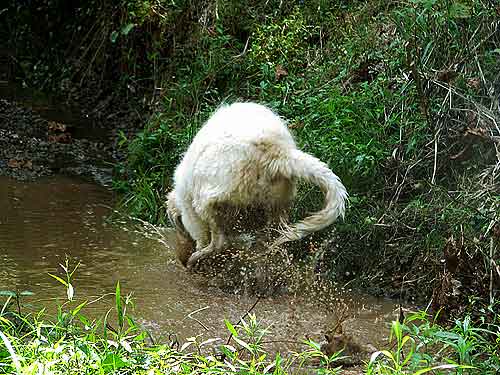 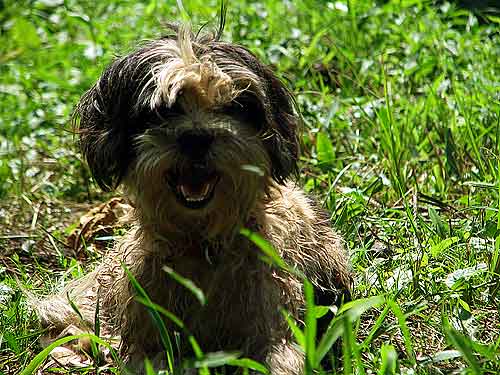