Great Pyrenees, as they are known in the U.S., originated as the Pyrenean Mountain dog in southern France and northern Spain where they guarded sheep on steep mountains. Males usually grow to 110-120 pounds with females in the 80-90 pound range. These are large dogs. Many people think they are only all-white, but they are often marked with varying shades or gray, red, and tan, called badger markings. I love the markings of color. Chloe is particularly well-marked. (Coco has fewer and lighter markings.)

Chloe’s markings on her ears– 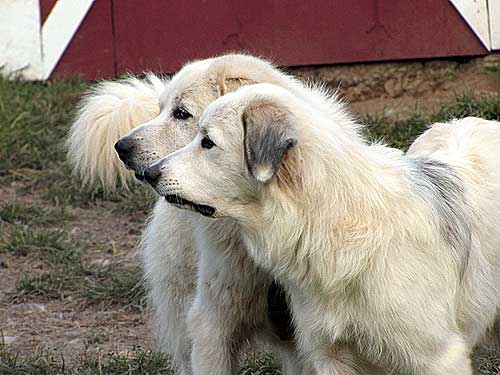 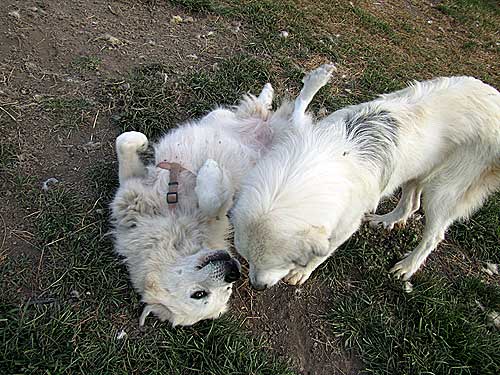 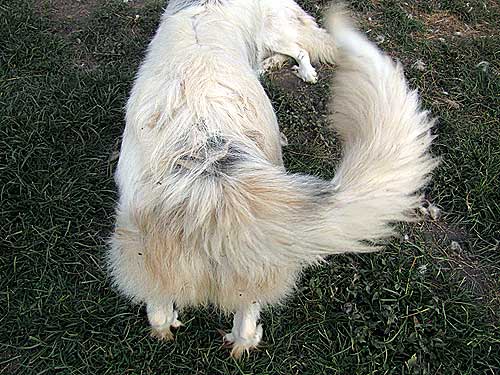 These dogs are strong, protective, independent-minded, yet usually gentle with people, especially children. The independent-minded thing leads to the Great Pyr joke: What do you call a Great Pyr off the leash? GONE. Ha. A Great Pyr has a narrowly-defined deafness to instructions they don’t want to follow.

Livestock guardian dogs have a specific series of behaviors known as mark, warn, chase, attack. An LGD “marks” its territory, staking its claim.

A Great Pyr will sit for long periods of time, staring out beyond its perimeters, barking. Predators are warned that a powerful guardian is in the field, and that they are prepared for all comers. If they have to, they will chase, and attack, but they spend most of their time making sure they don’t have to.

They are, in fact, peaceable creatures. They walk softly, but they carry a big stick.

Frequently, I’m asked why I don’t use my miniature donkeys as guardians. It’s a popular belief that they are (or can be) livestock guardians. Perhaps in some cases they can be, but I have not found any such behavior now in years of keeping miniature donkeys with my sheep. A pair of donkeys, in particular, will bond to each other, but even a single donkey is not recommended as a credible livestock guardian by the National Miniature Donkey Association. “Dogs can be more effective against bear and mountain lion predation because llamas and donkeys are afraid! (Who says they are not smart!)” Scroll down on the NMDA page here to read more of the “Miniature Donkeys Do Not Make Suitable Livestock Guardians” article from which I took that quote. There may be specific, individual donkeys that work well as livestock guardians (you may have one!), but I do not find that to be so with mine.

Give me a livestock guardian dog any day. What has surprised me since I got Chloe is how well a pair works! The impetus for adding Chloe to the field was for companionship to Coco, to keep her more content in the field. That has been realized. They are happily playing and hanging out, and they are a joy to watch. 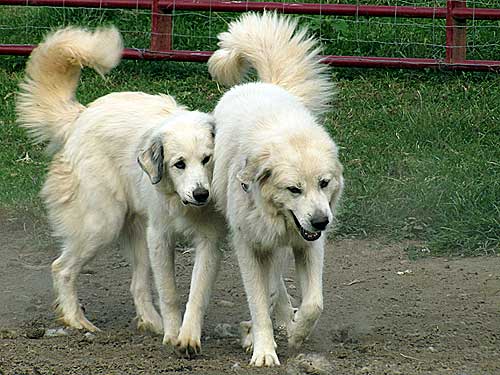 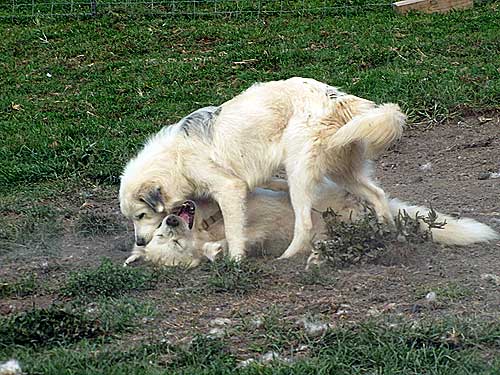 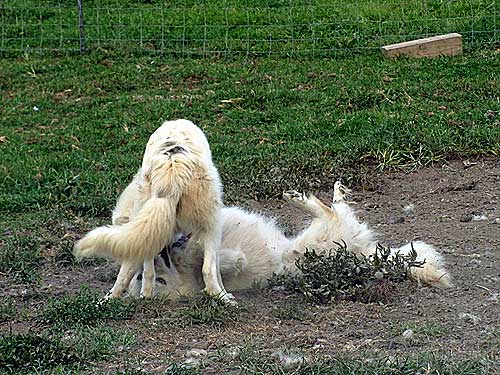 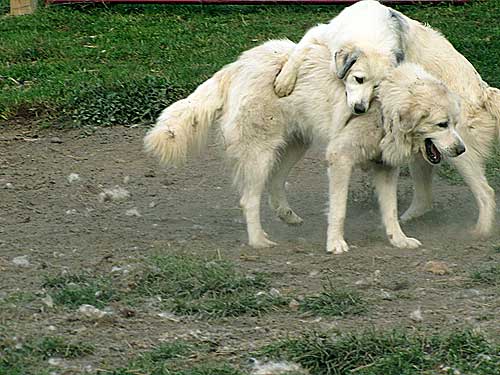 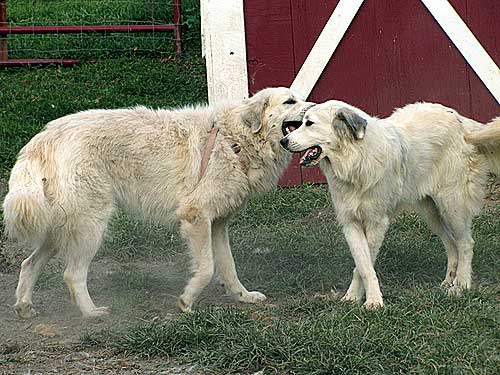 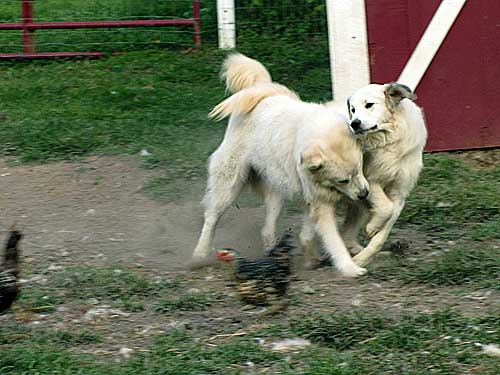 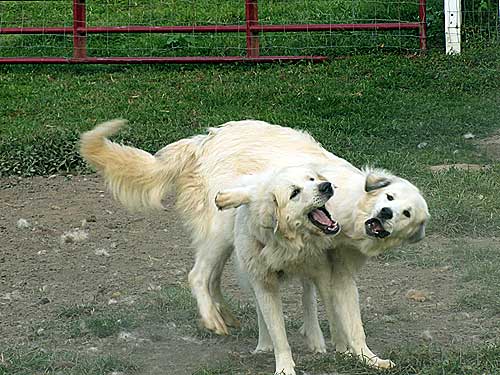 I could watch them for hours (if I had time!). They are so much fun together.

But, more, as Chloe is gradually maturing and beginning to exhibit her working characteristics, I see a pair working together, how they take cues from each other. A working dog alone can be fascinating to observe in their intensity as they patrol their perimeter or just sit and stare and bark. 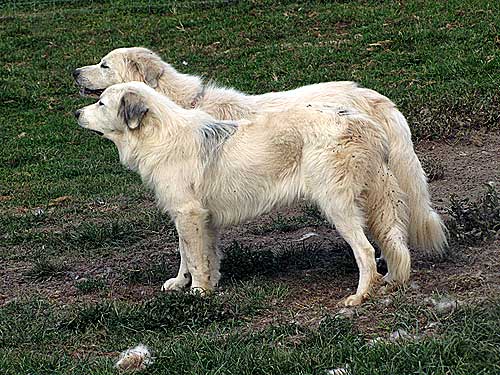 But a pair is even more fascinating. 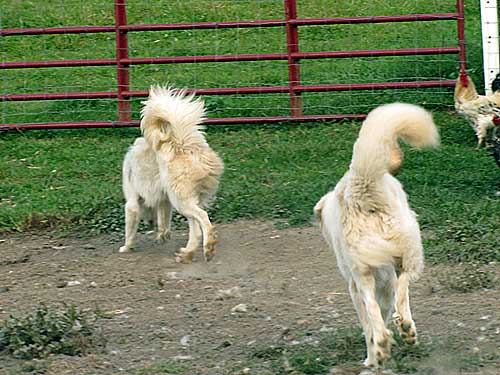 I’ve pondered my sheep situation, and have decided rather than acquiring additional working dogs, I’ll keep the sheep and goats together. I don’t want to add another livestock guardian pair OR separate Coco and Chloe. There are some small issues to be resolved in keeping the sheep and goats together, but they can be resolved adequately. Since I keep such a small herd of goats and small flock of sheep, it makes more sense to keep them together under the watch of my existing pair.

I am considering getting a guard dog for the house, however. I truly enjoyed it when Coco was in the house with us. It made me feel safer in the house at night. Unfortunately, that wasn’t something Coco could accept–she’s meant for the field and she wants to be there. And I need her in the field. Chloe, too. Now that I’ve seen a working pair together, I wouldn’t have it any other way. While most Pyrs have that strong field working instinct, not all do, so I’m interested, but in no hurry, to find a Great Pyr with a temperament suitable for home and family guardianship. I’ve even talked to a rescue about one Pyr that may be suited. If that one doesn’t work out, I’ll take my time waiting for the right one. I considered a lot of other breeds, researching and studying on it, but nothing appeals to me like a Great Pyr. They are the most amazing, fascinating dogs I’ve ever been around. 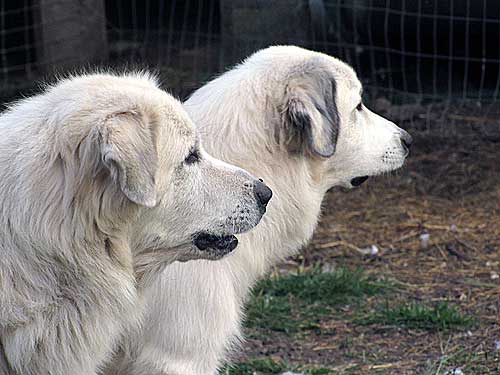