Outside the goat house, donkeys sit down with chickens while goats nap with a giant calf. 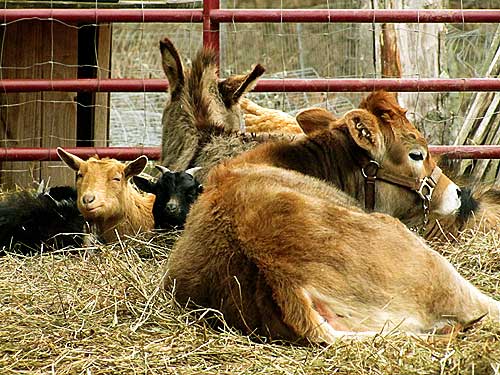 Inside the goat house, there is a whirlwind of activity. 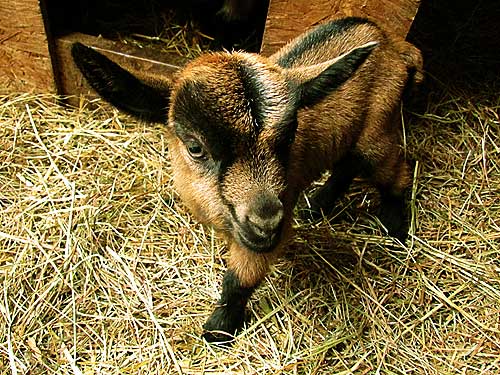 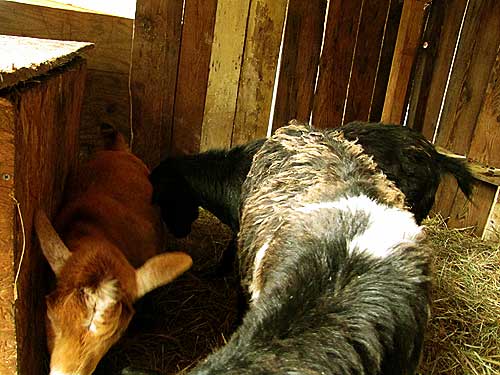 If fighting with each other isn’t enough, the mamas are in a constant battle of wits and wills with the babies, too. The kids always have their eye on a teat. 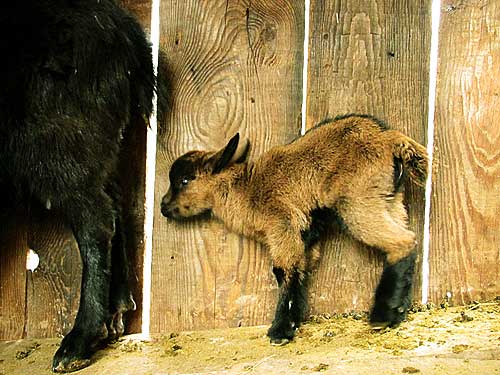 Any teat will do. Beware of that one, grasshopper! 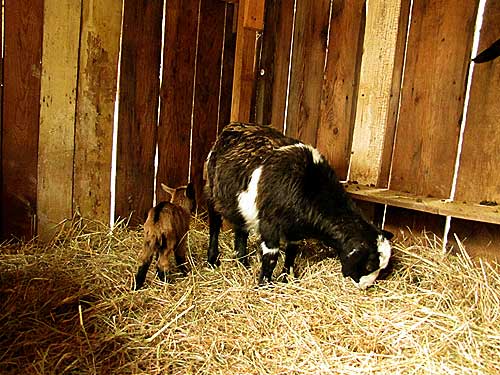 Latest update on Sprite the Unmother….. She continues to run from any and all baby-like creatures. Especially her own. 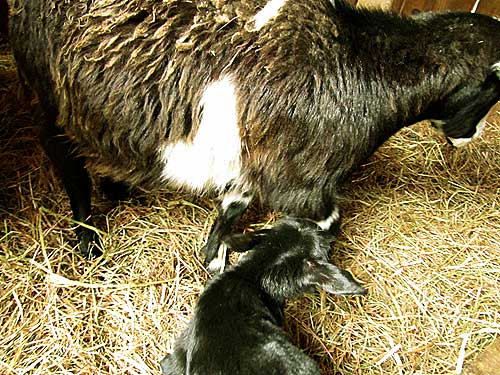 She likes to climb up on this little table and hide her udder in the corner. 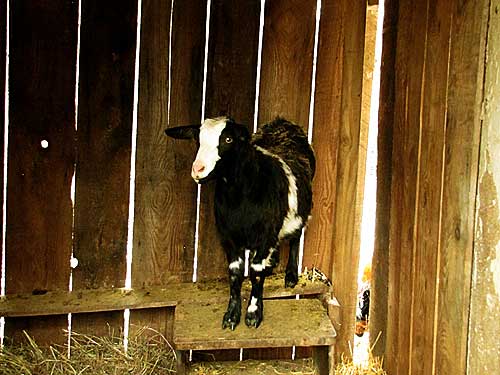 Sprite: “What udder? I don’t have an udder.”

Even Fanta gets up there sometimes, too, when she’s tired of being everybody’s mother. 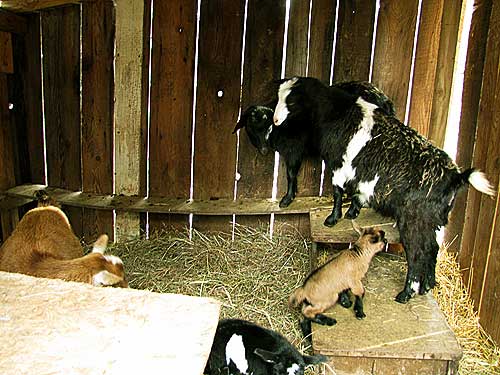 Those darn kids. They can climb, too!

Nutmeg still likes the dog house. She and Dr. Pepper have their own little club. 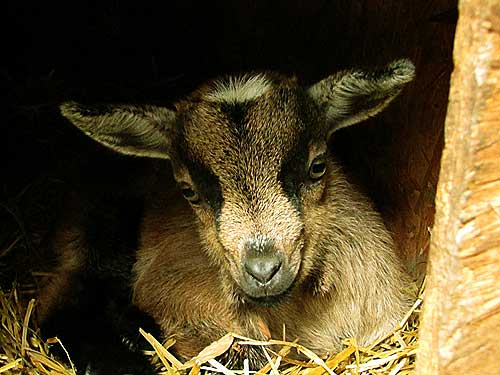 Except everybody else comes and goes now, making themselves at home, dirtying up the dishes and sleeping in the beds. 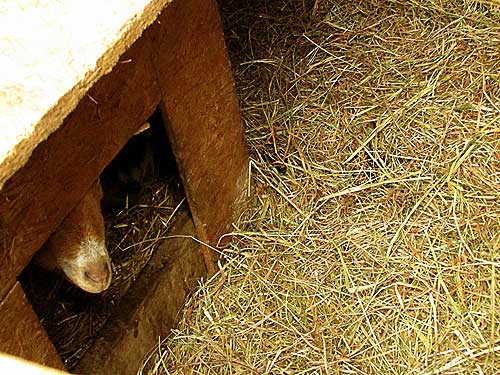 Nutmeg: “But I was here first!’

By the way, speaking of mothers, I didn’t think Clover was still nursing her two (who are now six months old), but yesterday, I saw them get under her and milk her. She didn’t let them nurse long, just a few minutes, but she has not completely kicked them off yet, apparently. 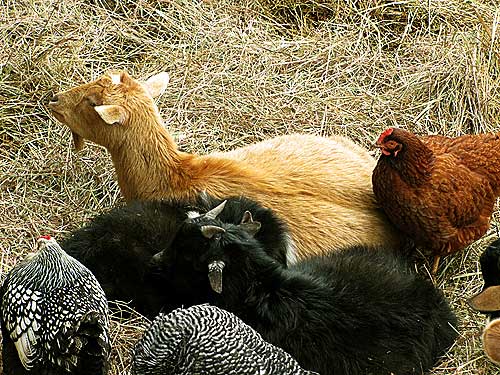 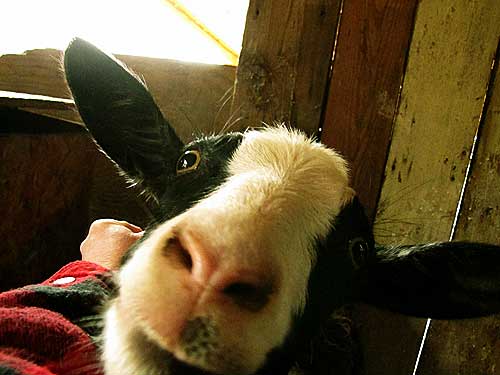 Note that I just have my fingers around a bit of fluff on her side. Just enough to let her know that I’m there if she tries to bolt.

I’m encouraged by the fact that it takes less and less might to hold her in place. (I can even hold her with one hand and take pictures!) She still won’t stand still for it voluntarily, but she is tolerating it better. Well, she did stand still for just about half a minute at the end of this session yesterday. The other babies had come over, and it may be difficult to tell, but there are actually three babies under her in this photo. 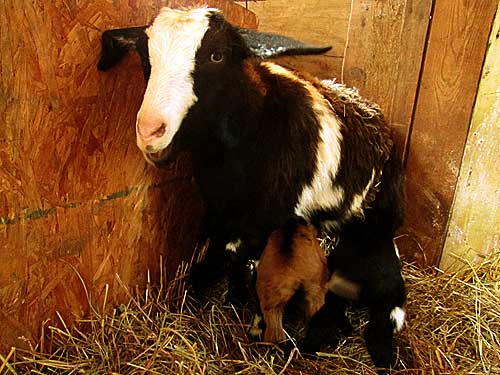 Then she ran away and hid her udder in the corner again. Until next time…….

Her baby is so happy when I come to the goat house. He knows it’s milking mommy time! 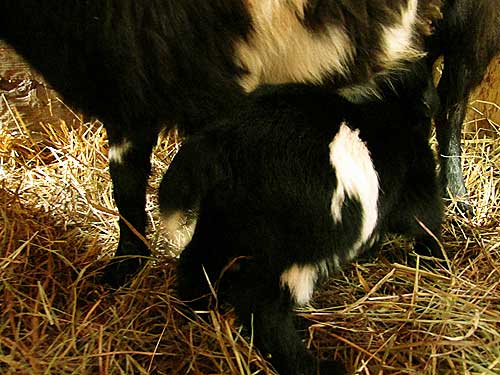 I wish you could see that little tail doing the happy wiggle when he’s nursing.