We started out this weekend’s little cow-moving adventure with several different possibilities of how it would be accomplished, but in the end, we set out in Ross’s truck (to pull) to meet SarahGrace and her family and neighbor (her “Farmer Wayne”) in Spencer where a trailer was supposed to be dropped off between Dairy Queen and Pizza Hut. We hadn’t gotten far when the muffler fell off Ross’s truck in the middle of the road. (Hmm. Not a good sign! Ross was irked!) We went back to pick up the muffler (by which time–the mere minutes it took to find some place to turn around–someone had run over it, though apparently they toodled right on their way because they weren’t in sight) and kept going. Ross’s truck wasn’t running well (aside from the muffler mishap), and by halfway to Spencer I was on my cell phone with one of the superboys. Ross and I thought we’d switch trucks with him and go back to get Ross’s truck later, thinking it wasn’t running well, so not a good idea to try to pull a trailer with it. Only when Sean met us at Dairy Queen, we saw that his truck doesn’t have a hitch.

So now we’ve lost the truck part of the equation. SarahGrace and her husband pulled in to the parking lot at Dairy Queen to tell us that the trailer part of the equation was also missing. But just as I thought, my cows aren’t going anywhere today, she said that Farmer Wayne had seen a farm with trailers on the side of the road and was back there right that minute trying to wrangle one for our use. I left Ross and one half of the superboys to work on Ross’s truck and climbed into SarahGrace’s Durango. 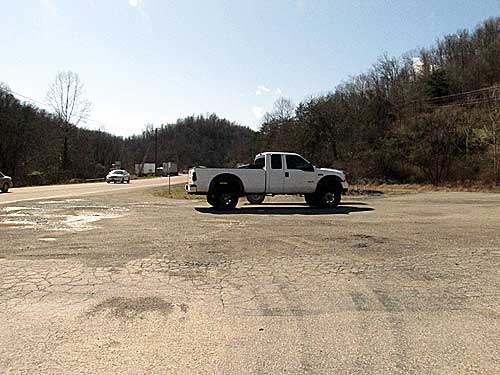 By the time we got to Farmer Wayne, he said he’d gotten “the wife” to say we could borrow one of their trailers. I said, “Let’s go before ‘the husband’ gets out of the bathroom and finds out what she’s done.” Cuz, like, Farmer Wayne didn’t know these people real well. And they didn’t know me at all. But the Durango could pull the kind of trailer they had, so we didn’t need a truck. Suddenly, we were a go again! 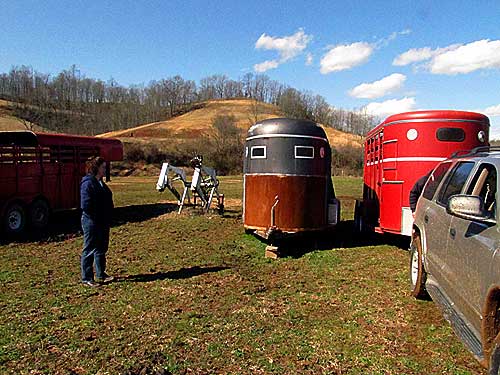 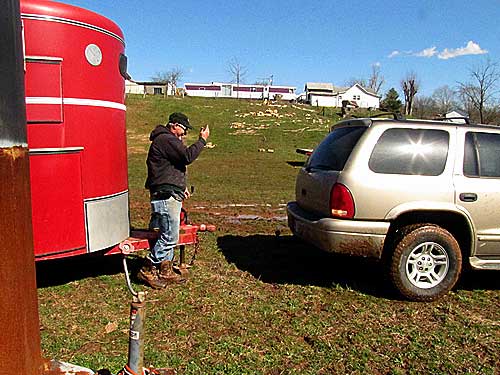 They had pretty horses there. 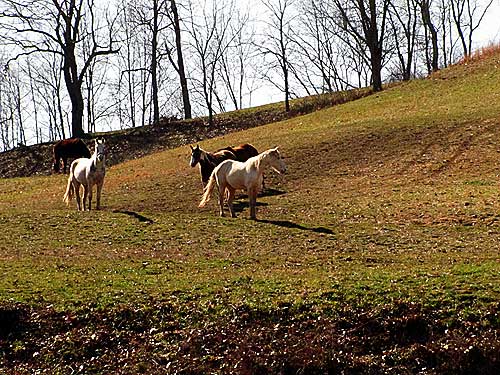 We arrived at Sassafras Farm. BP and Glory Bee eyed the activity outside the rear gate to the barnyard with some suspicion. 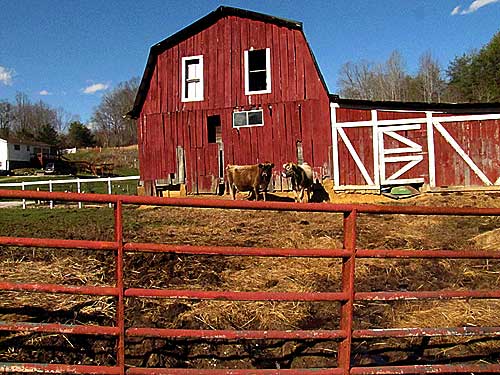 Farmer Wayne with the trailer he stole for me. (I’M JUST KIDDING.) 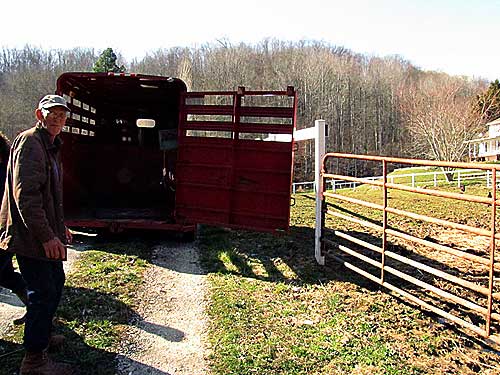 Generally, BP is easy enough to lead and will go where you want her to go, though she occasionally digs in her heels and demands some explanation and says, “I don’t FEEL like it.” But really, the hardest part of getting her on a trailer is just getting her to step up onto it. We didn’t have a ramp, so it took a little convincing once I got her to the trailer, but we got her on there in a few minutes. Glory Bee was another thing altogether.

I’d have photos of all the following activity except that I was involved in the activity and it was all a little hectic so my camera was hanging on a fence post most of the time. For the first act of our desperate little production, I tried to take Glory Bee to the trailer the same way I took BP to the trailer. Meaning, I got up close to her and tried to snap the lead on and then I was just gonna say, “C’mon, sweetie, let’s go for a trip.” I got as far as the getting up close to her part. Then I started chasing her around the barnyard, which wears me out faster than it does her. (And yes, I had food. She was not moved by the food.)

For the second act, we decided we would open the gate and try to just run her into the trailer, which was parked directly outside the gate. (Too muddy to back the trailer into the barnyard.) There was a lineup of people to block her escape other than to shoot straight for the trailer–my kids, SarahGrace’s family, Farmer Wayne….. Except Glory Bee decided to dart through the space between the trailer and the fence, which was unfortunately unmanned, and off she went toward the road. Luckily, we herded her back around before she got to the road and spent a few minutes running her everywhere except into the trailer.

For the final act, I finally remembered everything I know about this brat. You can never run Glory Bee where you want her to go if she has too many options. I said, “Let’s run her back into the barnyard.” After herding her back in there and shutting the gate, I went around to the front of the barn, shut up the sheep and donkeys in a stall (just for good measure), shut the front alleyway door, went through the alleyway to the back alleyway door, flung it open and said, “Dearest Glory Bee, would you like to take a tour of the barn?”

Because I never let the cows in the barn, this was too exciting to be resisted and Glory Bee scampered on in. I shut the back alleyway door and then she was trapped in the barn. She was still investigating, so she didn’t realize this yet. She sidled on into a stall and I slammed the stall door shut. Then I brought in 50 men to lead her to the trailer. Okay, just two, but 50 wouldn’t have been a bad idea. SarahGrace’s husband, who is in the Air Force, came in the stall and said, “I’m not really a farmer, Glory Bee, so don’t worry.” I’ll have to try that line on her sometime. Then he and Farmer Wayne each snapped a lead on her, and in a few minutes, she was on the trailer with mommy. HA. 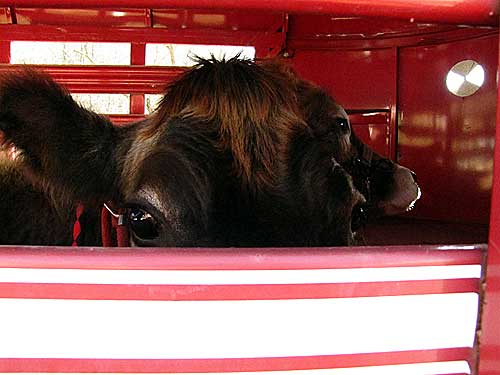 Look at that face. I have no idea how I’m ever going to milk this cow. 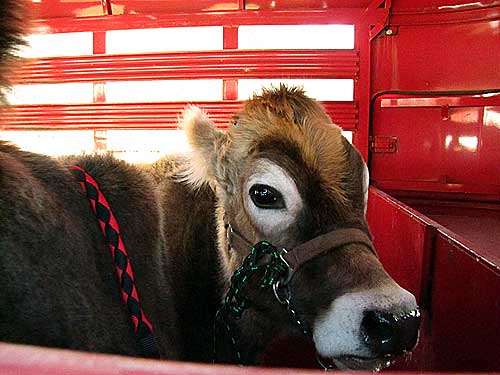 I have high hopes for the magic calm that is supposed to come over a milk cow after she’s calved.

Unloading is always easier than loading. Back at SarahGrace’s farm, the men kept two leads on Glory Bee as she came off the trailer, but she didn’t kick up a fuss. The cows were happy to get off the trailer and unpack at their honeymoon destination. 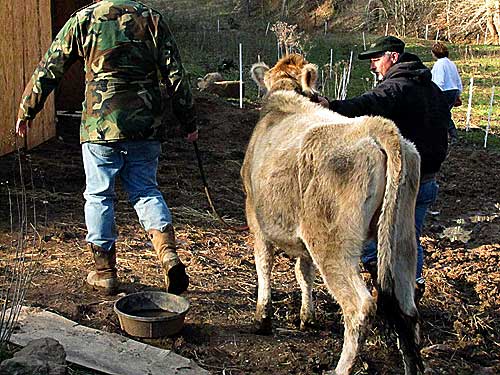 This is SarahGrace’s beautiful cow Bessie. 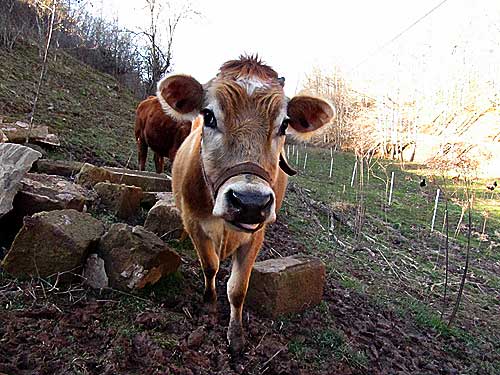 And this is the Mister. He is a Limousin bull. 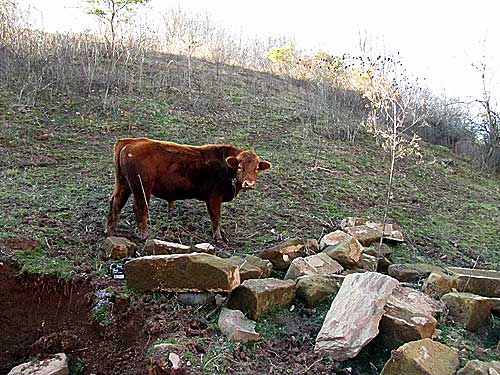 Bessie is due in April with his first child. Or five-hundredth. I think he’s Farmer Wayne’s only bull, but he’s not currently dating Farmer Wayne’s cows. He’s hanging with SarahGrace’s cows right now. He greeted everyone thoroughly. 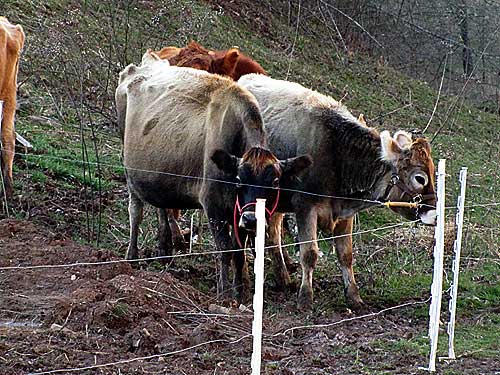 And so, there they are! On studcation! I hope they send postcards! And huge thanks to SarahGrace, her family, and Farmer Wayne for orchestrating a love life for my cows. 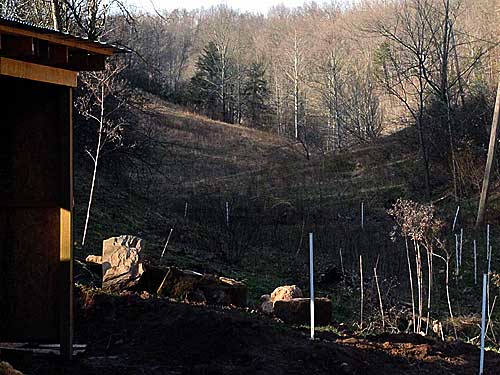 P.S. By the time I got back home, Ross was home, having figured out what was wrong with his truck and gotten it fixed. He heads back to South Carolina and will finish up nuclear power school in another month (and hopefully get a chance to come home again before he ships out).