I went to visit Clover a few days ago. I brought her some pound cake. Because I lied when I told her I almost missed her. I missed her really badly. And so did her babies. I stopped the car on the road in front of the pasture where she has been camping out with the other does at the goat farm who are also receiving Cowboy’s services. I rushed to the fence with my pound cake. Clover spotted me and her tongue went wild, slopping around her lips. She wanted that pound cake bad.

Unfortunately, half a dozen other does had their eyes on my pound cake and crowded up to the fence. I told them, “This is not for you. This is for my Clover!” But Clover wouldn’t come to the fence.

So I went inside the fence and I brought extra pound cake with me. I threw pound cake off to the side for the other does. They pounced on the scattered cake bits while I brought Clover her piece. She took one big, happy bite then the other does were back, crowding around. Clover dropped her cake and ran away. Clover dropped her cake. Clover would never drop a piece of cake!

I threw more pound cake to the does and, trying to trick them while their attention was diverted, secretly threw cake to Clover. She wouldn’t even try to take it. In fact, she ran away from the cake. She hid behind this platform. 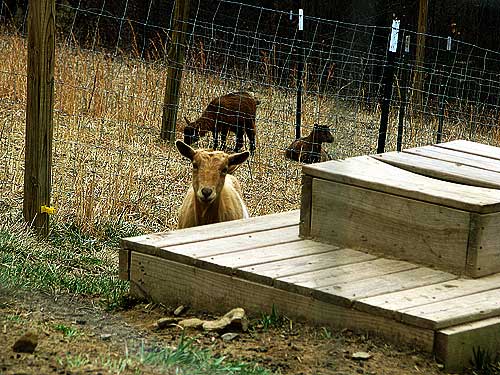 A minute later, the other does sniffed out Clover’s cake and were all over it, and I knew why she had run.

Clover, my bossy, uppity, arrogant, queen bee, was scared of the other does! She hasn’t been around any other does (not counting her own baby) in a long time. And this was a whole herd of does–and it was their turf, not hers. Despite her letters telling me she didn’t miss me and making long lists of primadonna demands, she was begging to come home.

On the other hand, the plan was to leave her for one more week to be sure she had plenty of opportunity to get pregnant. I have to think like a farmer, don’t I? A farmer doesn’t worry about their goat’s feelings . A farmer leaves the goat until the farmer is sure the goat is bred. I made myself go home without her.

And immediately regretted it and couldn’t stop thinking about her.

I baked her a big batch of molasses cookies and went back. 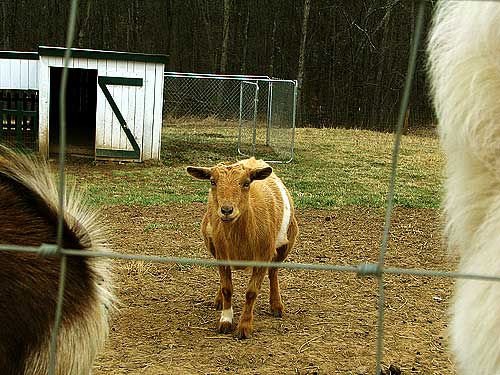 I told her to come home with me and be my little queen.

She was suspicious about the queen part when she had to ride around in the crate in the back of my car for 45 minutes. 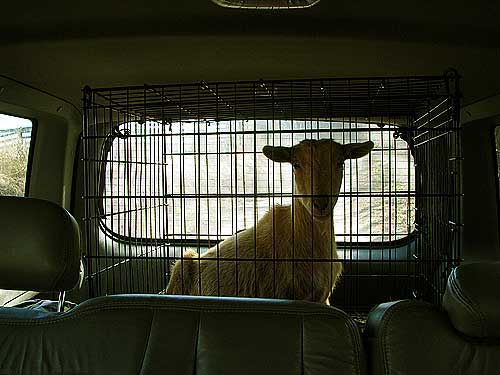 I went home a different way because I had to run by the high school first and pick up my son from football weight room practice. I thought I was lost when, seriously, I came to this sign: 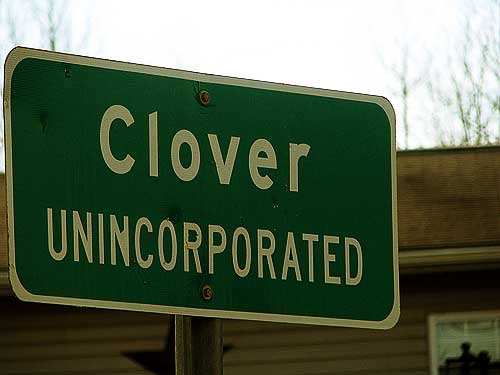 I didn’t even know there was a town around here called Clover. Clover thought the whole thing was really cool. Or not…. Actually, she was pretty upset back there. I told her it would be worth it. We’d be home soon and she’d be with her babies and her cookies.

And soon we were.

There was immediate sniffing and head-touching. Not head-butting, just touching, rubbing up against each other. 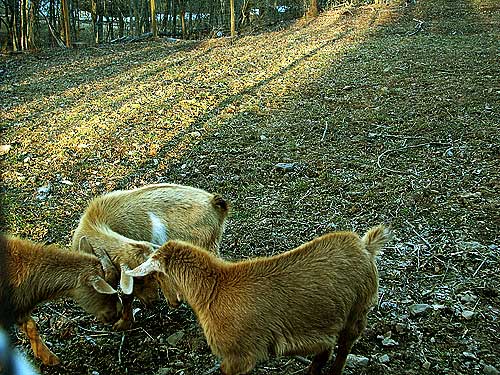 As if Nutmeg and Honey had to make sure she was real.

Then the celebrating started and the babies did a lot of leaping….. 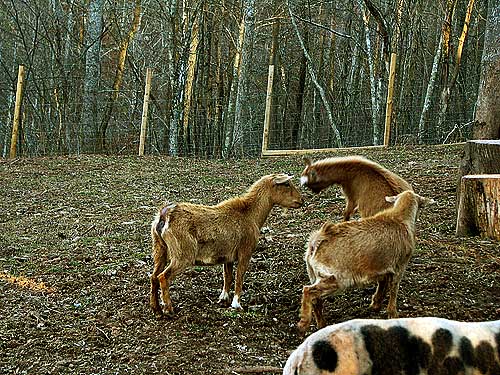 …..and dancing on two feet. 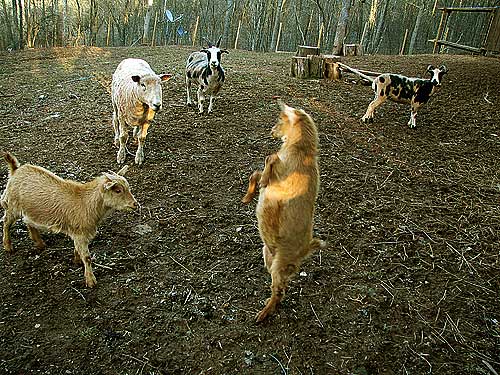 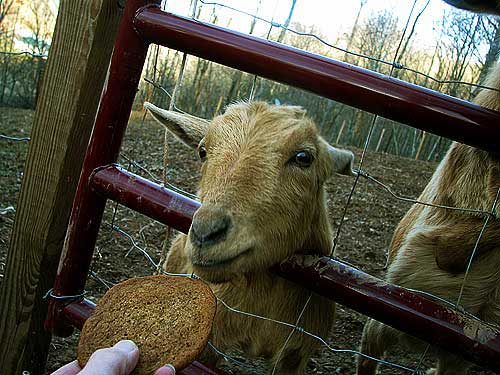 And there was more kissing…. 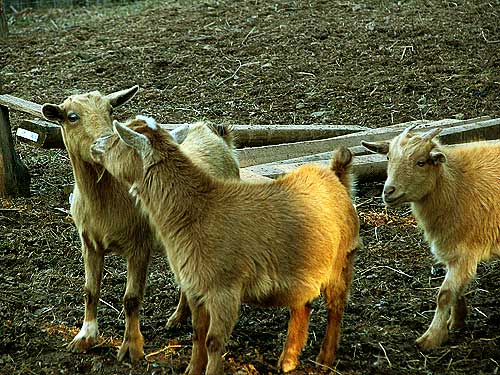 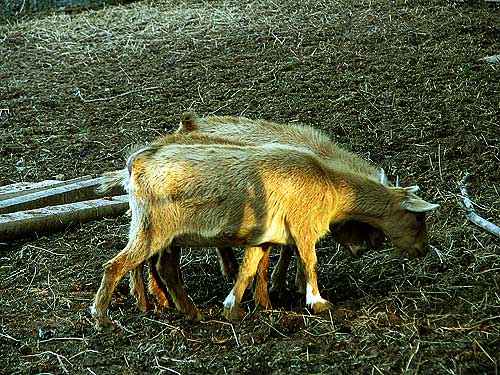 ….and staying so so close together. 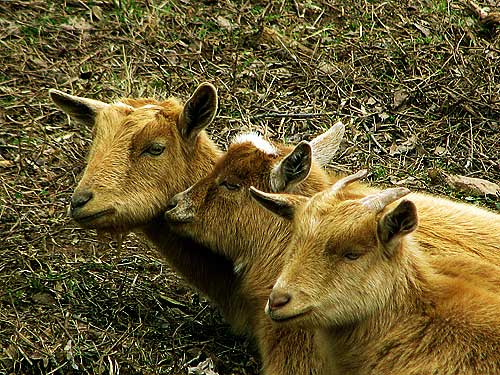 Then Clover said, “I was pretending, you know. I didn’t miss you and I don’t need you. I just felt sorry for you, Woman.” 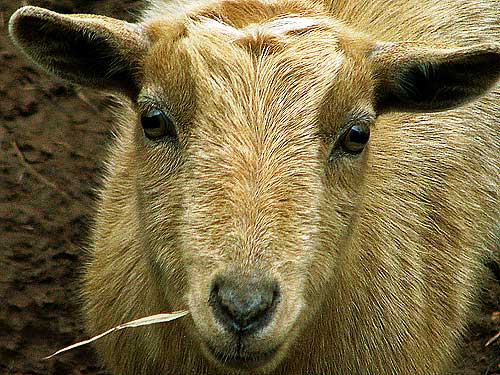 And take that piece of hay out of your mouth. You’re on the internet, for goodness’ sake. People have been asking about you and everything! Have you forgotten how to behave?