Completing the barn tour, I’ll take through the side that’s all about people. 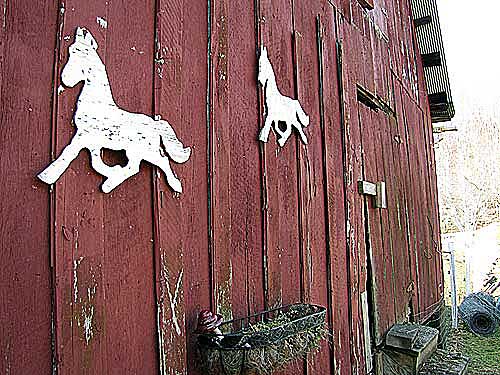 Which is not to say that goats and sheep haven’t been in there, because if you leave that door hanging open for more than two seconds, anyone in the area is going to clamber on up the steps and come in. Though they’re not welcome. Mostly, it’s only the sheep who are in the front barn yard, so usually it’s Annabelle following me in there. She’s right on me.

A pet sheep is such an oddball. I’m pretty sure she’d come sit down in the house and watch HGTV with me if I let her.

I love the old hinges on the barn door. 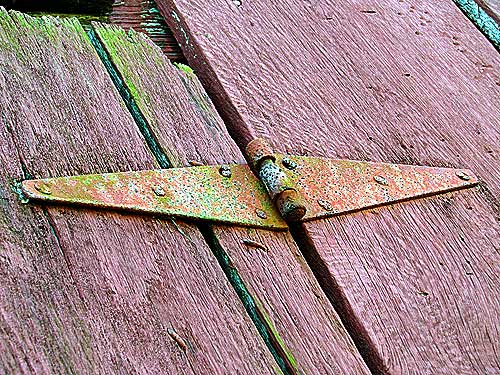 Though I don’t think Annabelle cares about the hinges or has noticed them.

Inside, the steps to the hay loft are immediately to the left, and usually there’s a cat waiting there. 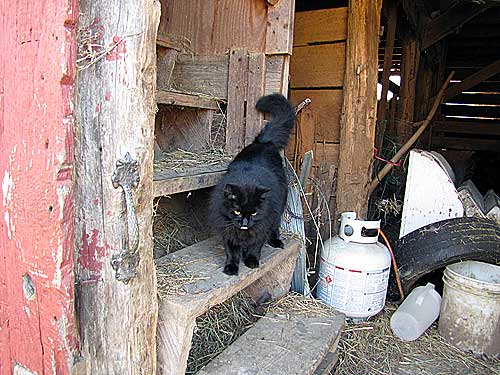 But first, let’s look around down here! At the far end of the downstairs storage area, you can look over into the outdoor-access stall that the cows can shelter in without entering the barn otherwise. 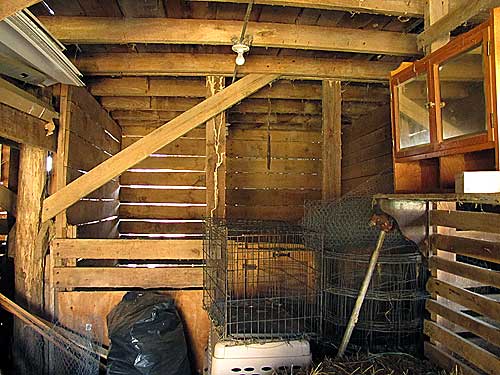 Just in front of the “look-over” into the outdoor-access stall, there is some fencing material and a couple of animal carriers. The wire carrier is one I brought with me, but the large plastic carrier under it was left here by the previous owners. I’m guessing they either used it for large dogs or goats. (They did have Nigerian Dwarf goats at one time, and it’s the perfect size for little goats.) I made good use of it when I was moving and we discovered they’d left it here.

There are all kinds of goodies tucked everywhere. Morgan’s horse “speed limit” sign that blew down off the outside of the barn is leaning against two more vintage church pews (like the two that are in front of the cellar) until it’s put back up somewhere else around the barn (like, inside, so it can’t be blown down). 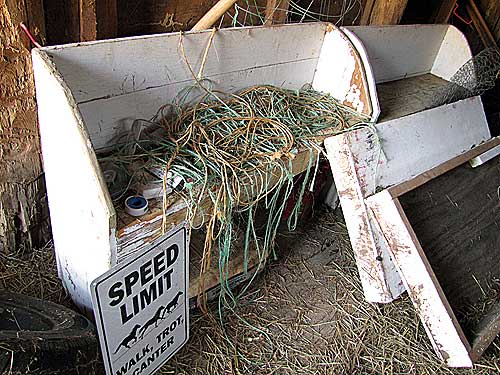 I saw something behind the pews, and pulled out what looks like a scythe. 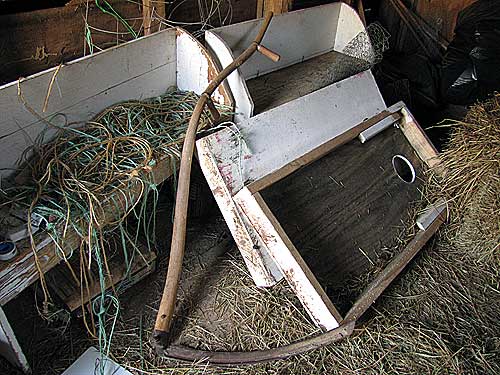 There’s a big roll of fence wire and a propane tank. 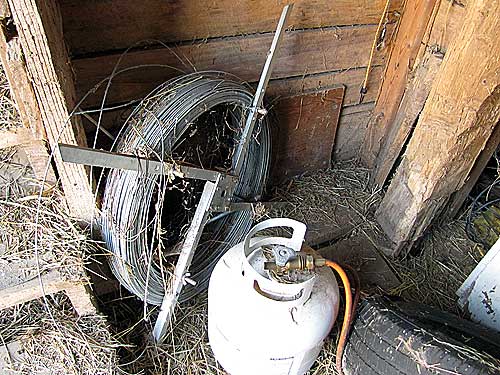 Up in the rafters here, I believe this is some spare siding for the house. 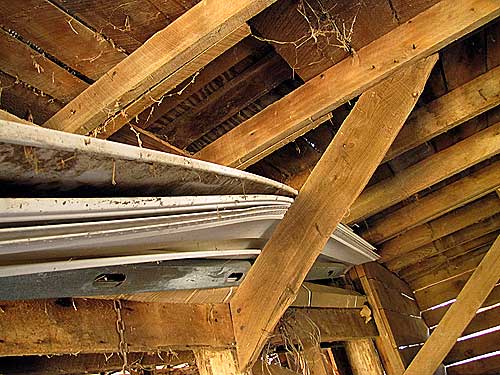 There are all kinds of electric fencing materials. 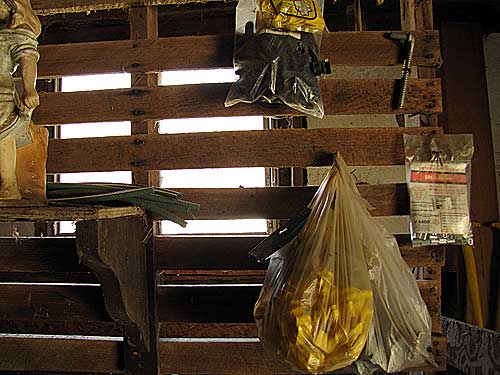 Some of these materials I brought with me from Stringtown Rising, but some of them were left here by the previous owners as well. 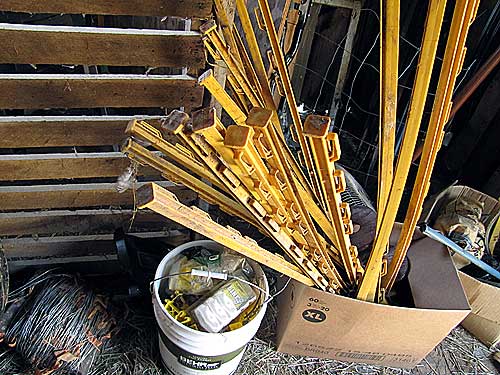 I had hoped to get the first upper pasture fenced with electric right after moving in. It was still warm and there was still stuff to eat up there, but I wasn’t able to get it done quickly enough. Now, with this mild winter, I’m wondering if we may have an early spring. I want to move the cows as soon as possible, so my attention will soon be back on getting that first upper pasture prepared. I have all the materials I need, so it won’t be too costly of a job just to get it installed. The pasture is already fenced, with woven wire that’s down in a few places, but the fence posts are all in place, so it’s just a matter of stringing the electric and putting the charger on. I want to have that done soon, and then as soon as I see stuff growing in there, the cows are moving.

In the corner over here there are more supplies, mostly left here by the previous owners, including some metal posts and a post hole digger. 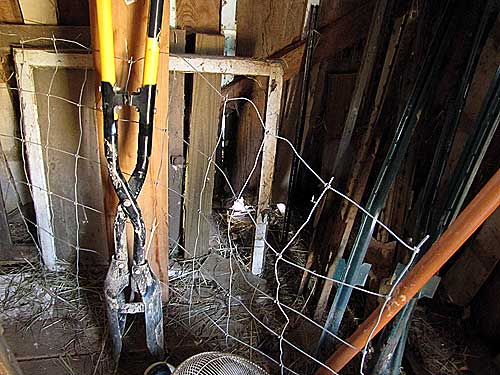 In this part of the barn, there are also lots of old horse show ribbons tacked on the walls. 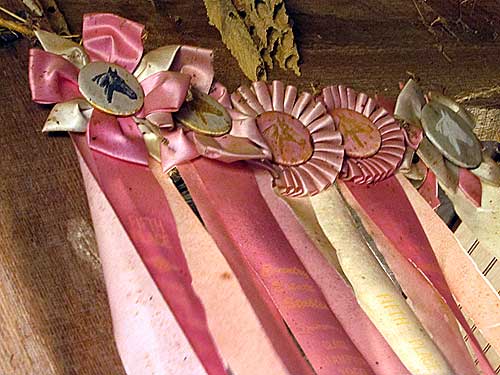 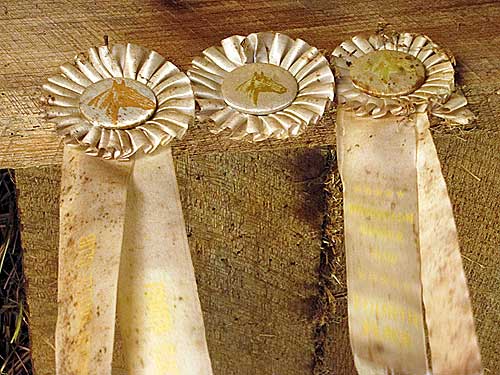 There are also all kinds of odds and ends on a shelf. 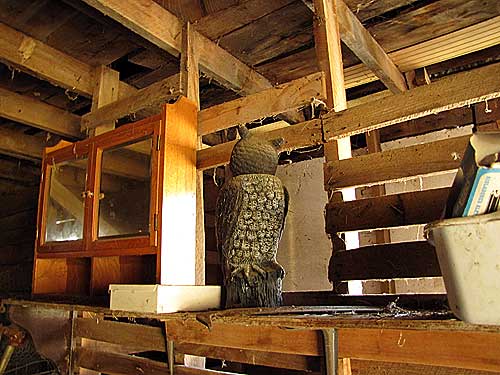 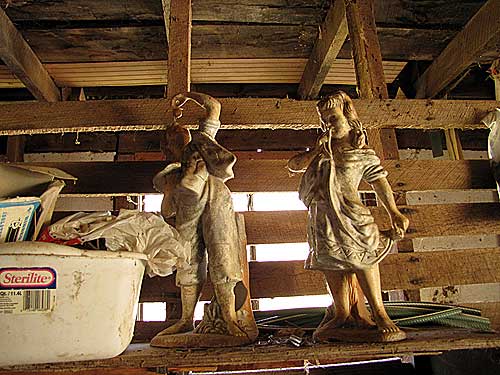 An old medicine cabinet, garden owl, emergency kit, tub of various things I haven’t gone through yet, and some old statuary. Around the corner, in a sort of cubby, I found some outdoor chairs. 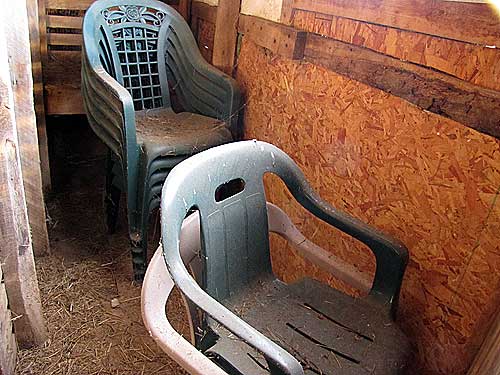 Now we can go up the stairs to the hay loft– 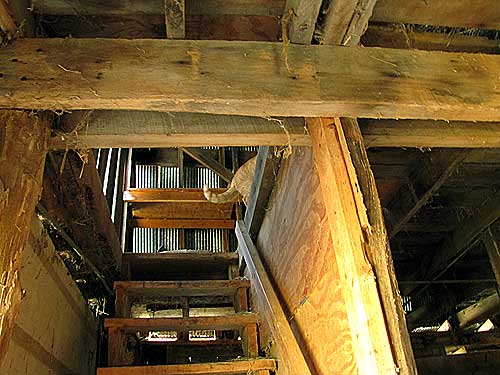 –where you can find hay and usually an angry cat. 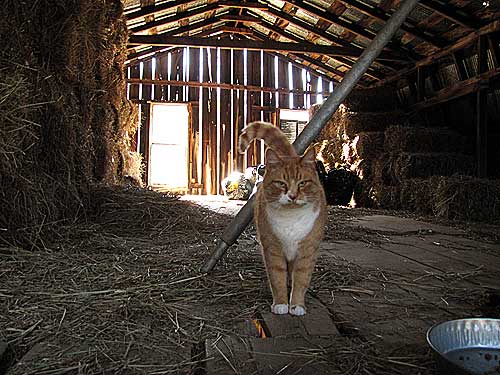 And that’s it for the barn tour! There are lots of goodies in this old barn that will help me get started here. I think there’s a lot of life left in this old barn, and I love it.