Yesterday was a big work day on the farm! That is one of my favorite kinds of days–a day when a whole list gets knocked out in a few hours, a list that’s been growing and bothering me for months. Adam, my favorite hired man, was back on the farm after being gone to work out of town most of the fall.

We started with Dumplin. 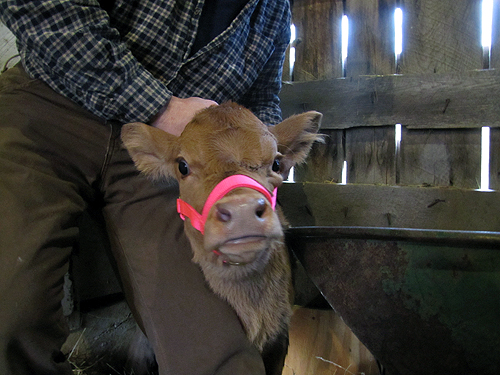 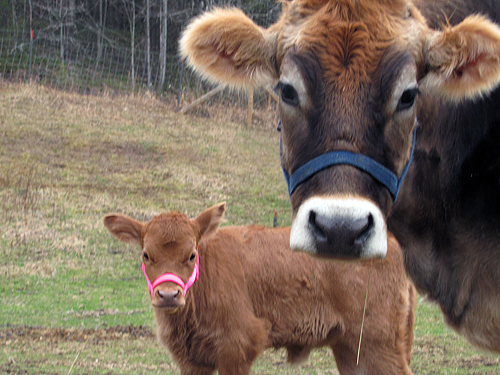 I still have Glory Bee’s calf halter, but I knew it would be too big. Glory Bee was two months old when we got this halter on her. 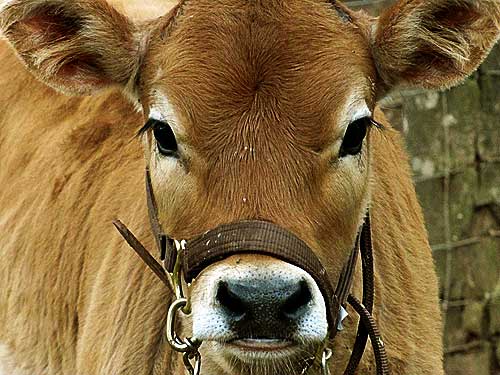 It was still too big then, and I also kept a collar on her for awhile because I didn’t trust the fit of the halter. They don’t sell newborn calf halters. However, they do sell all kinds of other little halters! 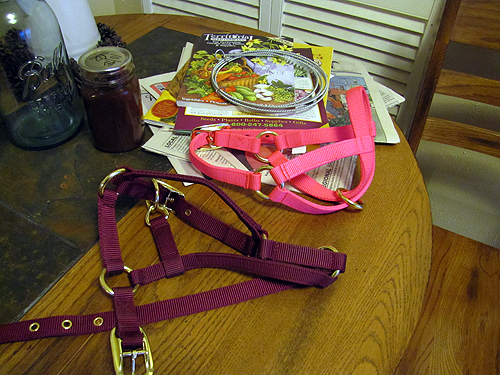 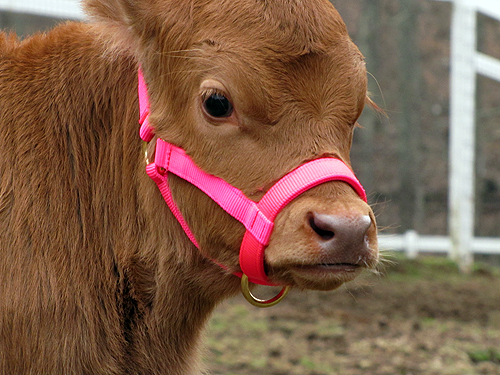 She ran around for a bit trying to shake it off! To no avail. I walked her on a lead a little bit, too, and she loved that. Or not. But we will be walking! Or dragging, pulling, fighting, and testing our individual wills. I plan to win. 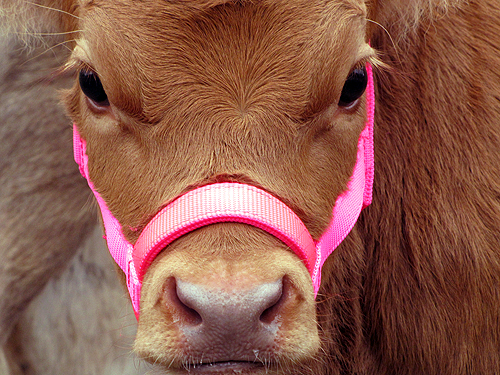 Eventually, she gave up and accepted her halter fate, if not the walking part. Possibly, she looks a little angry there. Meanwhile, Adam got to work on the rest of my list. 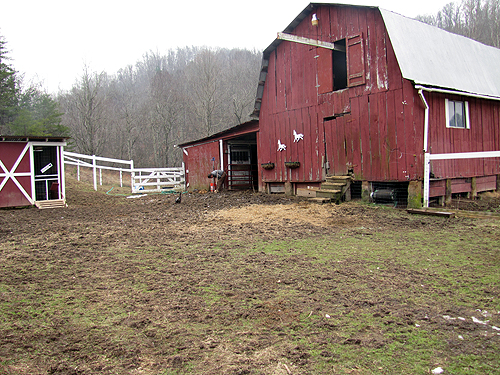 I’ve been having trouble with this faucet at the barn freezing. 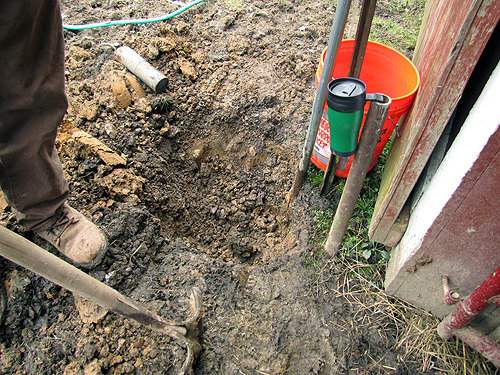 He dug it out, found a clog which he cleared, then put rock in the hole to let water drain instead freezing around the bottom of the pipe. 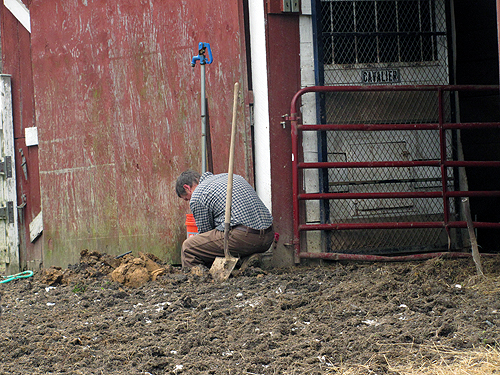 On to the next project! Last summer, Adam used a creep feeder my cousin got for me at an auction to build a hay feeder for the goats, with a roof to keep the hay dry. It’s built into the fence line of the goat yard so I can toss hay over the fence into the feeder. (This photo is taken from inside the goat yard.) 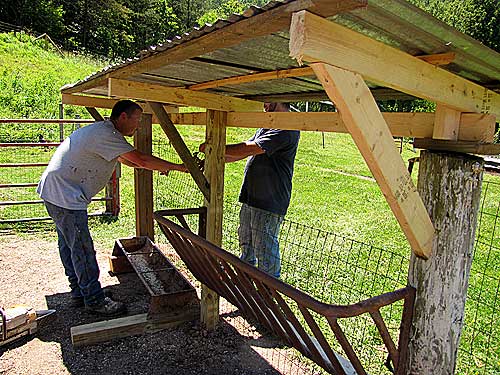 At the time, I didn’t realize I’d have a mama cow and baby in the barn yard for the winter. Wasn’t really thinking ahead or sure that Glory Bee was even bred. And the trouble is that Glory Bee sticks her giant head right over the fence, which was cut down slightly to make it easier to load hay, and eats the goats’ hay for them. The goats don’t really appreciate that, and neither do I. So I asked Adam to build a hay feeder for Glory Bee backing right up to the goats’ feeder, extending the roof, yet still allowing me access to toss hay into the goats’ feeder while blocking her access to it. Using materials I had on hand already, he got to work. 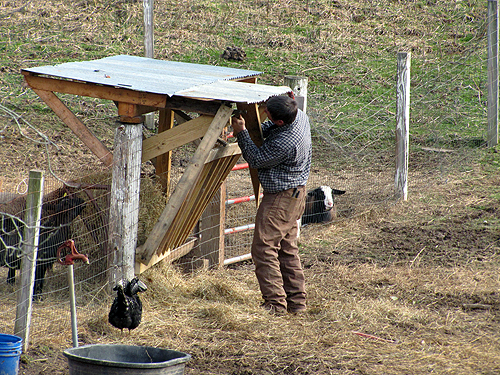 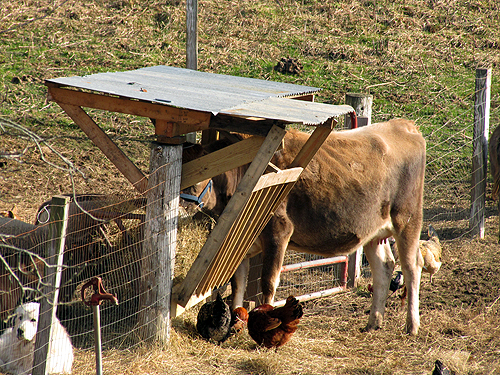 She can’t quite reach the goats’ hay, even from the open side. 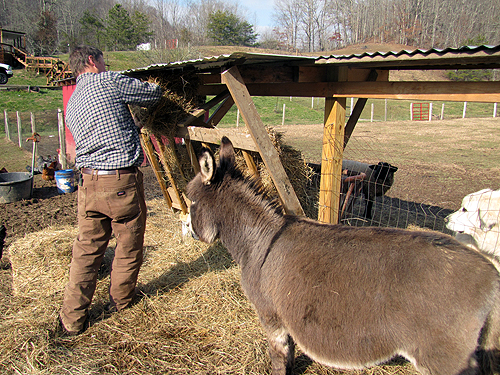 Problem solved! On to the next one! And there were several. I’ve had trouble keeping Gwennie contained anywhere–she can break out of anything! Every field. Every stall. She broke the gate off the alleyway one time. I take her everywhere I go, to the store, to the post office, anywhere. She is a car ridin’ junkie. She LOVES to get in the car with me. And mostly she is well-behaved in the car. She knows about how long it takes me to come out of a feed store or how long it takes me to pump gas. But on extended outings, she’s not as good. She gets antsy if she has to wait too long in the car. The other day, she ate the seatbelts out of my Explorer during an extended wait in the car. Adam fixed one of the stall doors to where she can’t escape. I’ve had trouble with my old stall doors since moving here. He’s worked on them before, but I think this time it’s finally right. While other work went on, Gwennie was stalled, testing, and she had to give up. Yay. Then I took her back to the house because she won’t actually be stalled very often, but it’s nice to know that I can put her up, securely, at times that I need to do so.

Meanwhile, Adam stretched the barn yard fence in a few places where Glory Bee had been leaning, checked on a new piece I’d put on my saddle, moved 20 bales of hay to the lower level inside the barn so it will be easy for me to load into the horses’ feeder, filled all my water buckets, and fixed the lock on the back alleyway door. Before he left, we sat down and made a materials list for a three-sided horse shelter with a hay feeder that I want him to build in the “park” field out past the driveway so I don’t have to keep the horses in the back barn yard all winter. 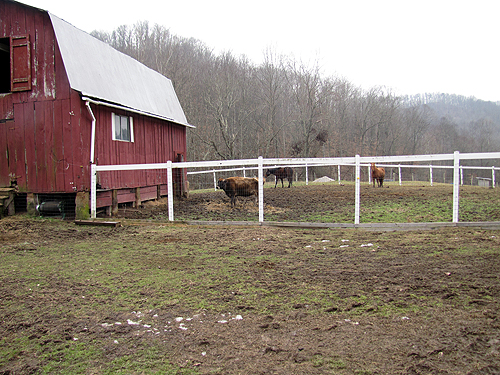 Once I move the horses and donkeys there, I can open up the front and back barn yards to allow the cows full access, also allowing BP to get back together with Glory Bee. It will give the cows a little more space to move around, and take some of the winter pressure of large animals off the barn yard. 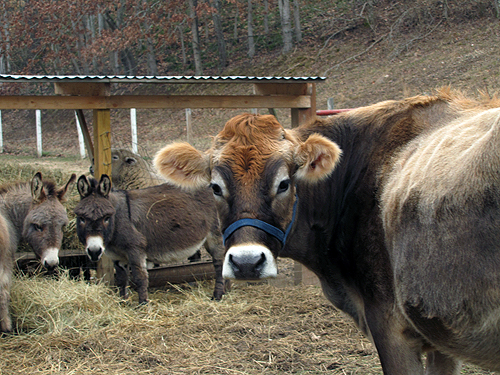 And now for the big Dumplin news. As if you didn’t know this was coming. 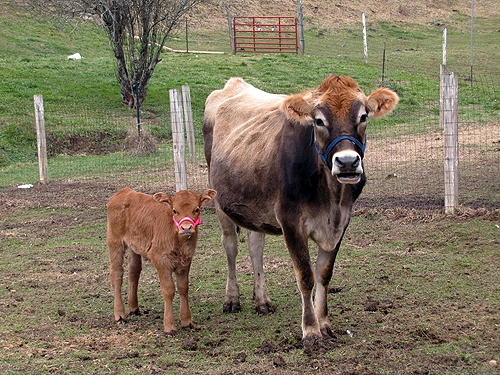