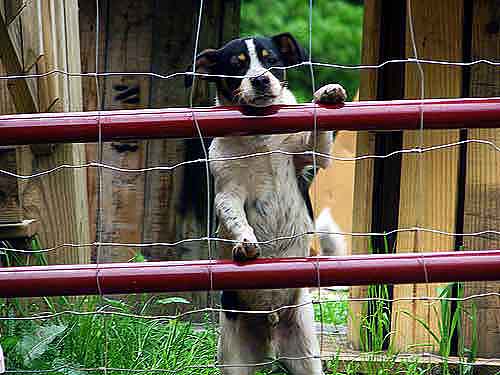 Tuesday morning, Spot went missing around 8 a.m. I started getting worried about him by 8:30. By 9, I was driving up and down the road looking for him. No Spot.

Then I had to go out. I came home around 4:30. Halfway down the road, I came across the Ornery Angel and her three little children, walking. (If you don’t know the Ornery Angel story, read here.) Supposedly, each time I pick up the Ornery Angel, my motivation is tested. When I can finally pick her up with no motivation other than seeking the goodness of mankind, she will evaporate (as her only purpose on this planet is to test me) and my place in heaven will be secured. Only because I keep thinking it will make me a better person to pick her up, it ruins the whole thing, so picking her up actually does me no good. But since I pick her up anyway, knowing it does me no good, does that then make me a better person, after all?

My logic defies even me.

And besides, to be honest, I wanted to ask her if she had piglets yet and make sure she remembered that she was going to give me one.

I stopped my car and rolled the window down. She looked at me like she wanted to let out a big sigh of irritation that it was me again. I asked her if they needed a ride. She hesitated, then said, yes. Her car was broken down, and in fact, was broken down at home so she had walked all the way (over 2 miles) to meet the bus to get her kids and they were on their way home.

All four of them piled in and I asked her about the piglets. They’d had 12! And she mentioned giving us one. Or two. Or more. They want to get rid of them as soon as they’re ready to go. I told her about Spot and asked if she’d seen him. She said she had seen him earlier, all the way out the road, headed for the hard road, which was bad news.

I’m thinking this is how Spot ended up in the McDonald’s parking lot to begin with. He’s a wanderer, a brief sojourner, a rolling stone, breaking hearts along the way. I tried to remind myself that we didn’t set out to bring another dog home, he’d only been at the farm for two days, and surely we wouldn’t miss him.

But we missed him.

That same day, Dookie-the-farm-shih-tsu went to the groomer. 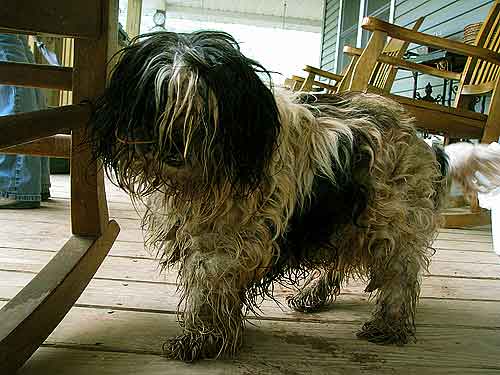 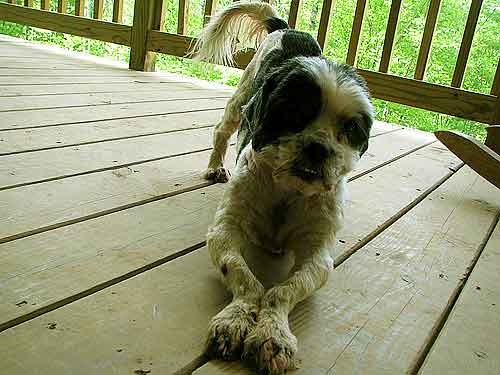 He’s almost like a new dog after he comes home from the groomer. Except he’s still cranky and he’s not our new dog.

I kept looking for Spot on Wednesday. I’d called my cousin and asked him to watch for Spot since he’d been last seen headed in his direction. My cousin’s farm tends to attract strays. I was out yesterday and came home around 4. The Ornery Angel’s car was working again and it was parked in my driveway.

And she had Spot. 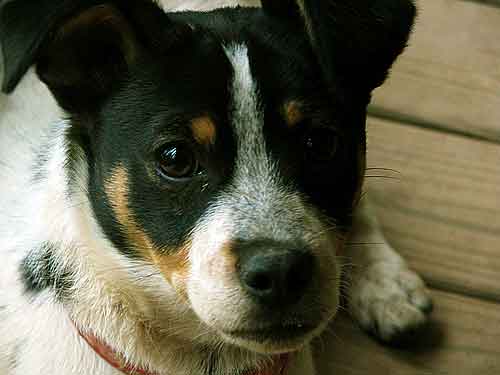 She’d seen him on the road, picked him up, and brought him home to us.

P.S. Everyone decided that Spot should be renamed Boomerang. I put a pink collar on him since it was the only one I had and I’m going to get him one of those engraved tags with our phone number.