Yesterday morning, I found BP in this position. 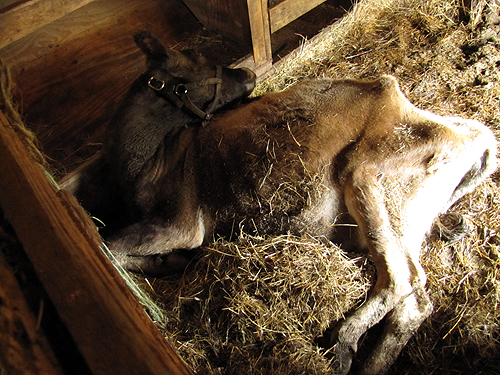 She’d gone into the outdoor access stall in the barn where the cows have their hay feeder and fallen, awkwardly, and there was no way for her to get up. All she could do was moo plaintively, and all I could do was run to the house and start making phone calls.

Unfortunately, I couldn’t get hold of anyone. I tried all the usual suspects, and I left messages, and I waited by the phone, afraid to even go back to check on BP for fear I’d miss a call that would bring me help. And help appeared in the most unexpected way!

A reader, Naomi, and her family live near here. She contacted her mother, Phyllis, who lives on the next road over. In short order, Phyllis arrived with two big strong boys named Adam and Tyler.

I took them straight to BP. 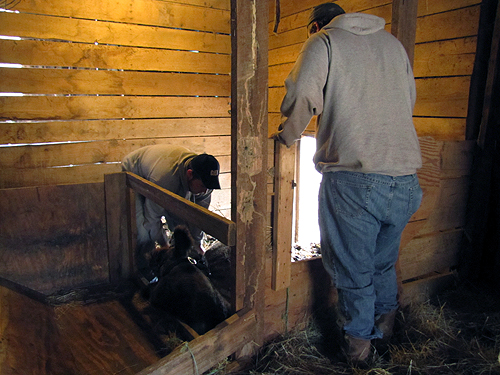 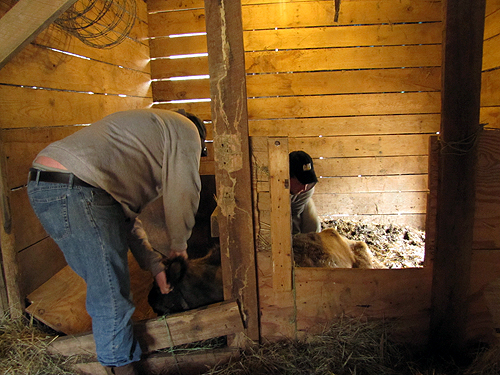 (They were doing the pushing and pulling. I was doing the coaxing and cajoling.) 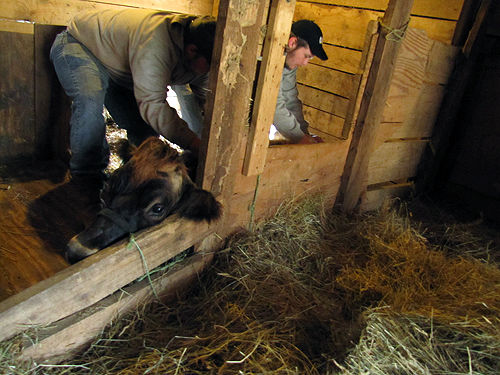 She was sitting in a position where she COULD get up. If she wanted to.

We stood there for awhile staring at her and talking to her and asking her if she would please get up, but BP was having none of it. So I gave her some hay, and she ate, and we decided that was good enough for now. She could get up when she was ready, and who knew how long that was going to take, so I thanked my heroes and they went home. Thank you to Naomi and Phyllis and Adam and Tyler!!!

And I wondered if BP was going to sit there for a week while I brought her water and food. Meanwhile, my phone went out and I couldn’t even try to call my hired man Adam anymore–who I still needed. I knew BP was going to need to be moved out of the back barn yard, and I was afraid that when she tried to get up, she might fall again. And I had horses and donkeys galloping circles around the house and a few other assorted issues. BP actually did get up, on her own, after a few more hours (!) while Glory Bee broke into the storage side of the barn. 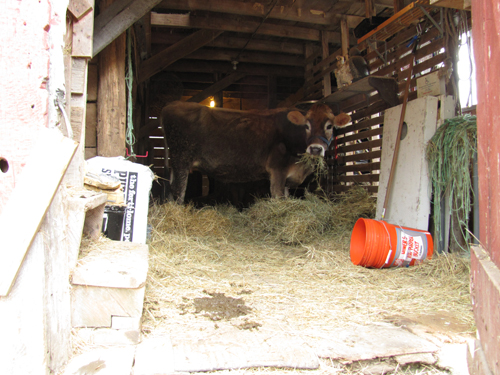 When it rains, it pours! (Literally lately around here.)

Then my friend Sarah emailed me and she called Adam for me! And in short order, I finally had the man who can do anything on my farm to finish saving the day. And BP. (Thank you, Sarah!) 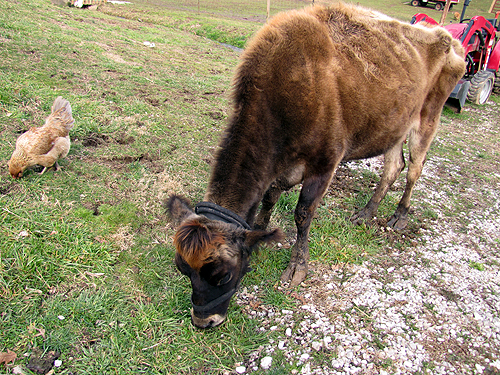 And now I am going to bring up a difficult subject in regard to BP, but I think I need to prepare those of you who may feel attached to BP the same way that I do. Several weeks ago, Adam came to me with this subject. He knows how I feel about BP, and he wanted me to start preparing myself. He said, “This winter has been really hard on her, and I don’t think she should go through another winter.” She had gone down in the creek in December, and if she went down again that way, and I couldn’t get help, she would suffer. She went down again yesterday, and I had a hard time finding help.

I love this old, bony, broken down cow. She taught me to milk and she gave me Glory Bee. And she taught me a lot more besides milking–she taught me stamina and patience and dedication and determination. This cow and I, we had a big adventure together. She can’t get bred again, and I have tried to give her an easy retirement. But she is an old cow, and her life isn’t easy, no matter what I do for her. Adam said, “Put her out in the field when spring comes. Let her enjoy the grass and the sunshine. Then I will take care of her for you before winter comes again.”

After yesterday, this plan to give her the spring and summer and fall of sunshine and grass became a bit dimmer. Adam said, “If she goes down again, it will be the last time.” She hurt herself a bit this time. He thinks she may have broken something inside, but there is nothing to be done. She is walking and not appearing to be in pain.

I was going to put her with Glory Bee and Dumplin this spring in the field along the road where I can bring Glory Bee out easily for milking. But that field has places where she might slip. Yesterday, Adam took her to the upper pasture. It is the most dry field on the farm and she can get down to the water without too much trouble. It is the least likely field where she could slip, and it is her best chance to make it to fall, to enjoy one last summer of sunshine and green grass.

Adam, coaxing BP around the house to take her to the upper pasture. 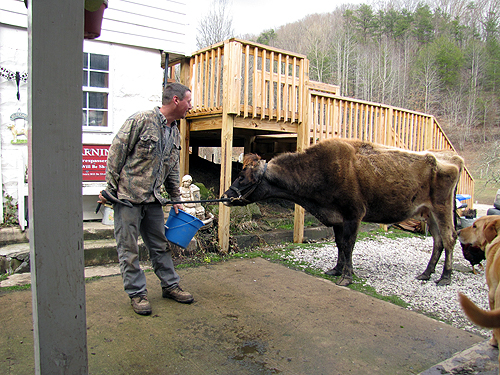 But she may not make it. She is brittle, and if she goes down one more time…..

Adam will come and take care of her.