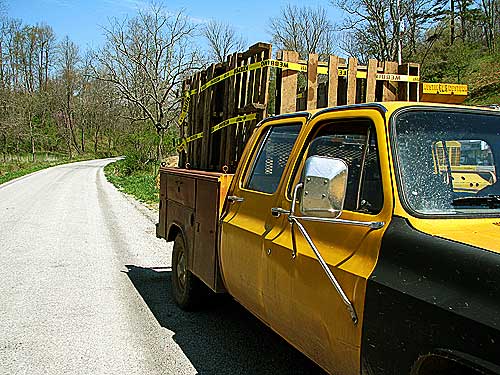 It actually went pretty well! A good way to transport animals in the bed of a truck, if you don’t happen to own one of those multi-thousand dollar stock trailers, is with the use of plain old wooden pallets you can pick up for free many places. 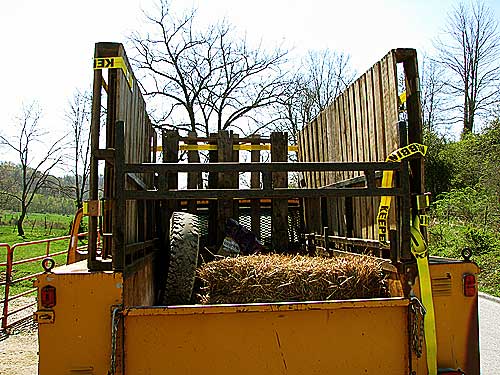 52’s truck is out of commission at the moment, so we borrowed my cousin’s big yellow truck and lined it with pallets. You can attach them with rope and/or tie-downs. It’s a free set-up and you can take it apart once you’re done like it never happened. We had some hay and feed in there for the cow to enjoy on the trip. 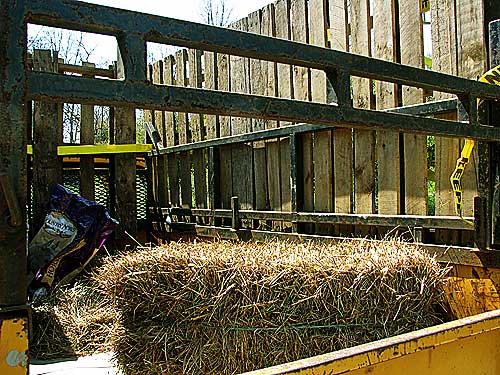 When we got to the farm in Ohio, they brought her out using some feed. 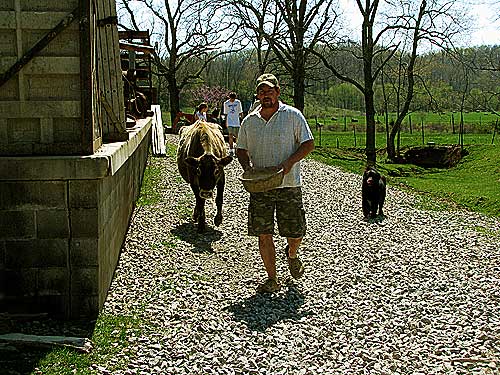 They made a halter with rope to put on her. We backed the truck up to a big pile of gravel. 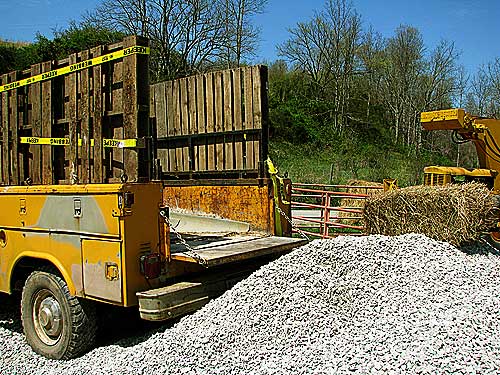 They led her up the gravel pile using the feed…. 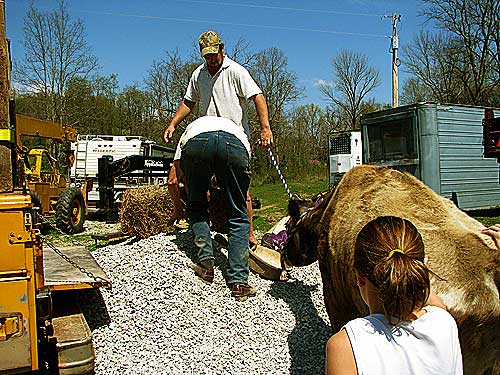 ….then on into the truck. The whole family got involved with the pushing and shoving. They had a bunch of kids! 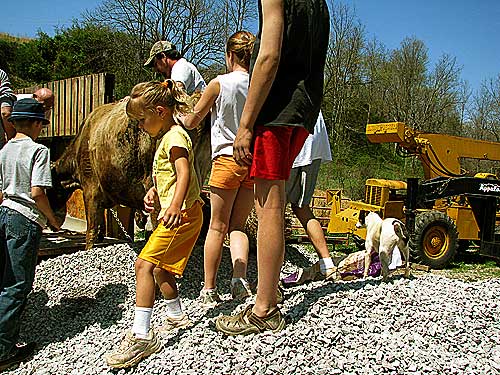 I wondered if it took half a dozen or so people to shove her on, how we were going to get her off. I asked them if they wanted to come to West Virginia with us. They said no. And right about then they leaped into action as a family again chasing down the calf that made a break for it while we were all paying attention to putting the cow in the truck. 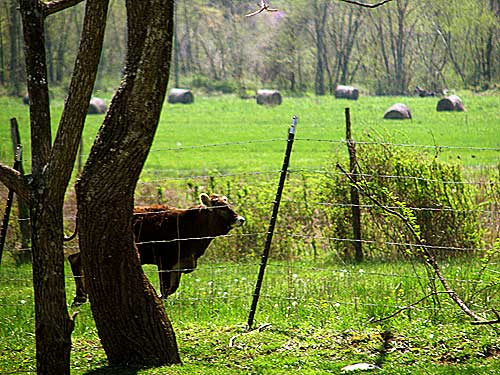 See to the left of the tree in the below photo? That wheel? That’s a kid on a dirt bike. No cowboy horses on this Ohio farm–they ride the range on dirt bikes. 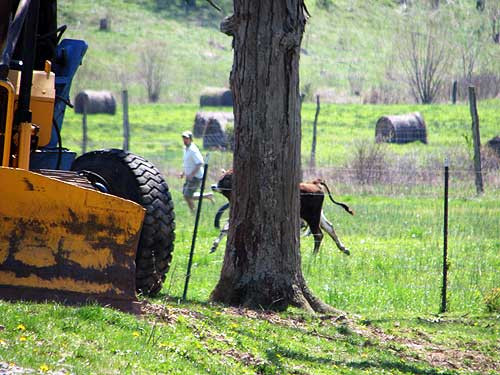 I have to admit that this whole episode was really entertaining. Because it’s always entertaining when a farm animal gets out–if it’s NOT YOURS. 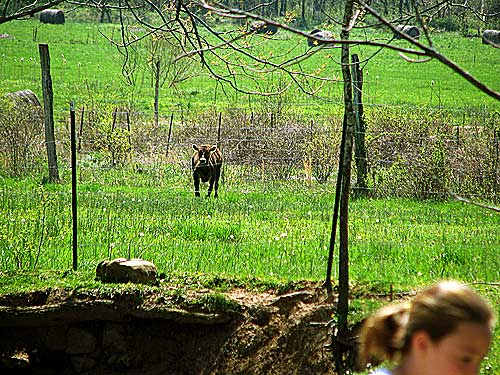 And there she goes, back in the gate where she belongs. 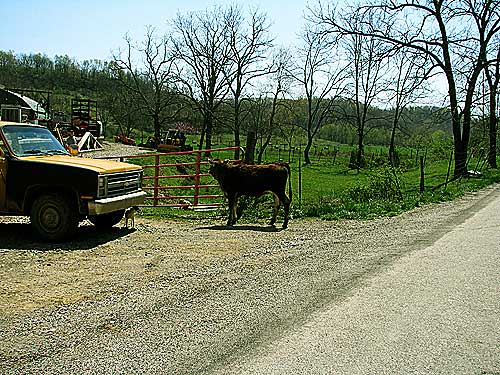 I blocked her from going on down the road and helped herd her to the gate. They thanked me for helping. I said, no big deal….. I herded a ram this morning before I got here. 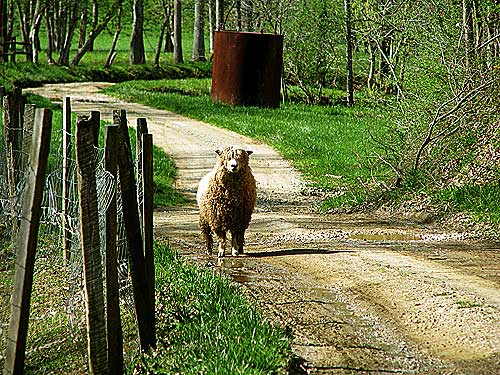 Back to our cow…. She was tethered at the front of the truck to keep her from moving around too much. 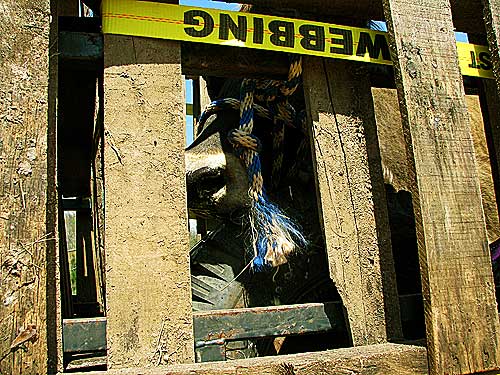 Another pallet was put in place at the back of the truck and we were off! 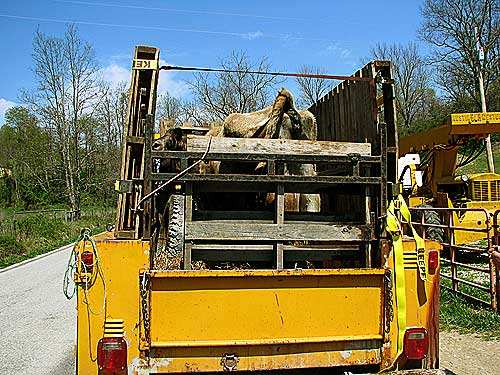 Once we got back to our farm, we backed the truck up to a creekbank. 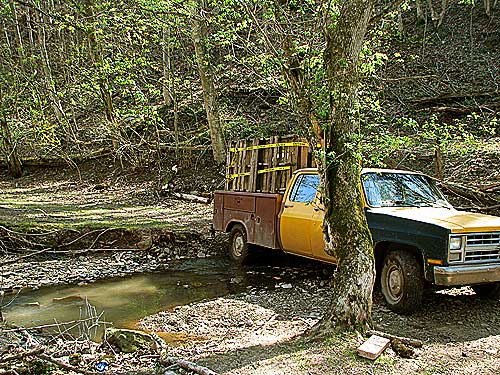 We got her turned around inside the truck and it only took a little pulling to encourage her. She came right off! 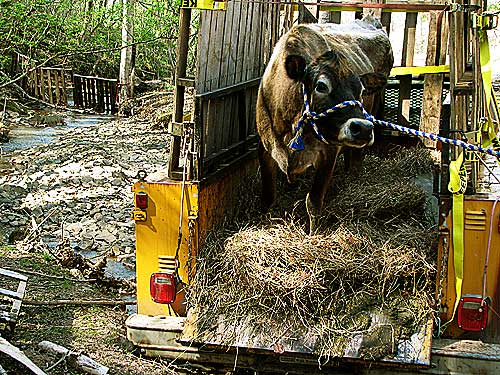 And started walking around our meadow bottom like a giant in Lilliput-land. 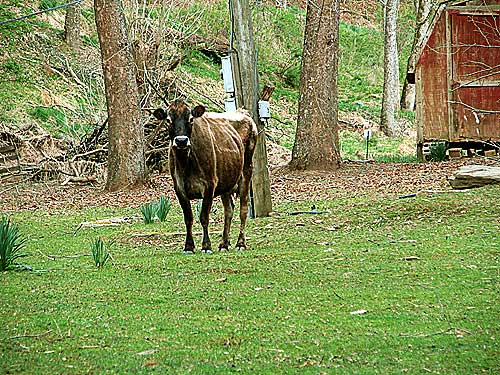 Look how big she is next to Boomer. 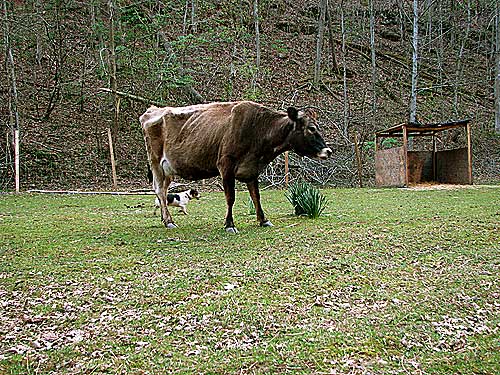 I think she could swallow him in one big bite. 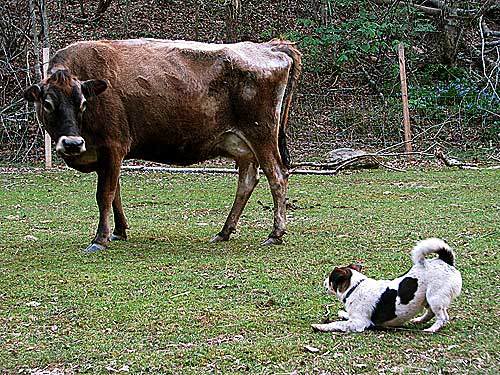 Or step on his head and he’d go missing. 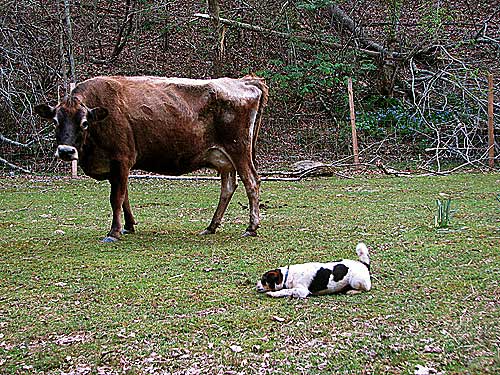 Only she wouldn’t do any of that because she’s very sweet and gentle. I’m pretty sure Boomer was more interested in her than she was in him. 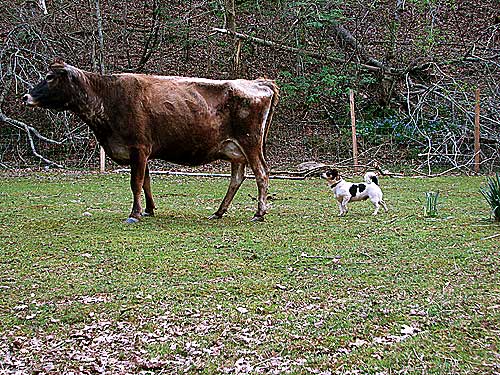 I started milking her yesterday morning. I’m still in my learning curve, but it’s going pretty good, I think!!!! They were getting up to two gallons a milking from her, sometimes a gallon and a half. I brought home 3/4 gallon. I probably milked her a full gallon, but I spilled some. It’ll get better. I left her when I knew she still had a milk, but for the first milking, I figured I’d get out while the getting was good. She is sweet and gentle and she was very patient with me. She doesn’t kick. I love her! 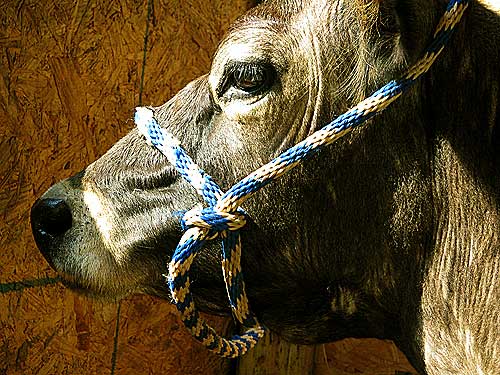 I just stared and stared at this milk in my refrigerator yesterday. And took it out and examined it. And put it back. And took it out. And photographed it like it was artwork. (It also tastes sweet and wonderful and perfect.) 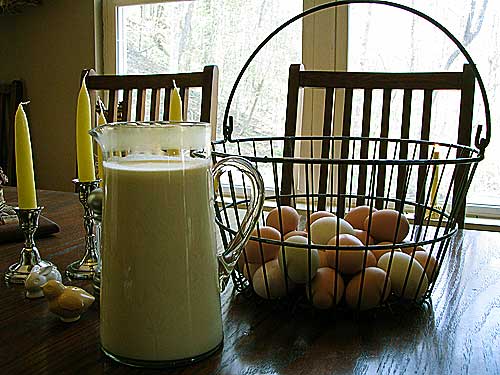 Me and my cow, we made that! Here’s a pic of me milking her for the first time yesterday. 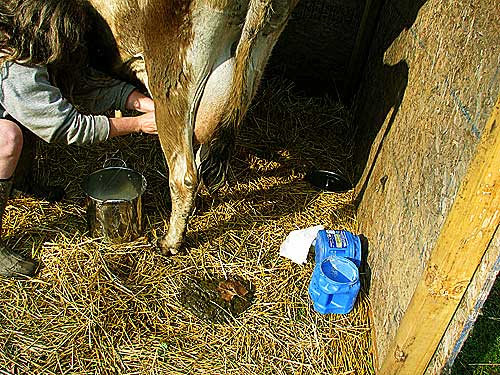 Don’t you love my get-up? 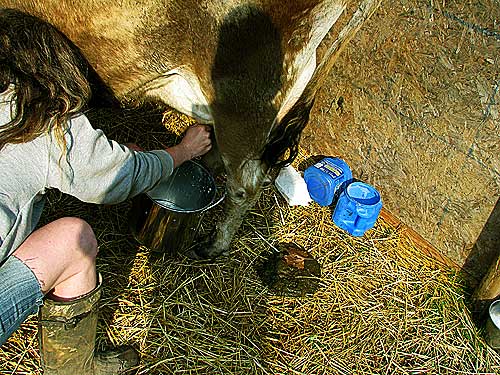 Morgan declared she was having nothing to do with this cow milk. I thought this was rather odd since she drank Clover’s milk (GOAT milk) with no reservations. I told her I wasn’t buying any more milk, so she’d have to drink water for the rest of her life. (We very very very rarely buy soda pop. She’s a pretty big milk drinker.) She insisted she would buy her own milk! Then she came home from school yesterday and declared, “I’m drinking this milk!” And filled up a big tall glass and drank it down.