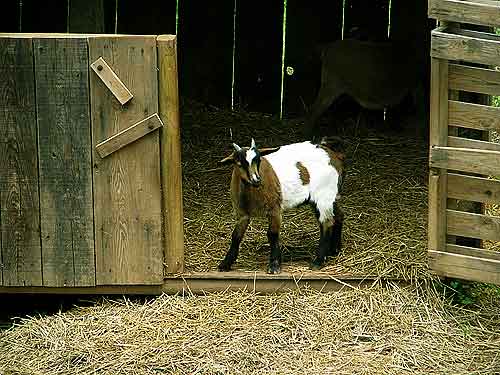 Our fainting goat, Pepsi, came from Tennessee, but we didn’t have to go that far to get him. We just had to drive a couple hours south to Beckley, West Virginia, where we met up with Pepsi’s owner, Bob Lewis.

We found Pepsi in his arms, wrapped in a blankie. 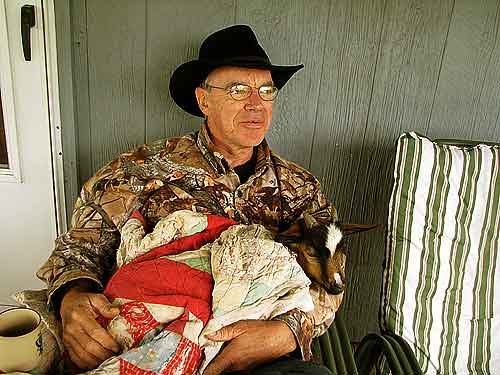 Pepsi’s last goat baby companion had just been picked up, and he’d left his mama in Tennessee, so he was feeling pretty forlorn already and he hadn’t even gotten back in the car to complete his trip.

We brought a carrier, but decided against it. Pepsi didn’t need a carrier. Pepsi needed another set of arms. So he came in the truck with me, on my lap, with his blankie. 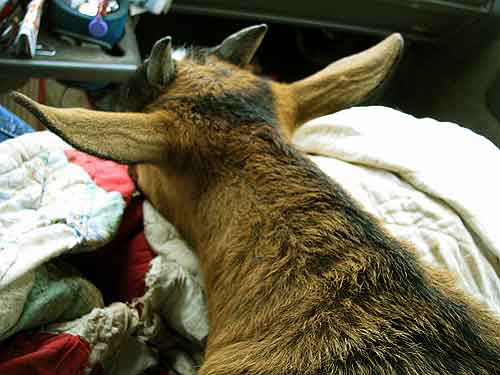 And he was bawling like one, too. He was pretty upset the first little bit. Then he pooped all over me and the truck and he felt so much better. We stopped and cleaned things up. (Then we felt so much better.) And Pepsi put his head down on my lap and I rubbed him behind the ears. He sprawled out across me and slept almost the whole way home.

And that’s when I was really surprised.

I got out of the truck with Pepsi and took him to the goat yard. I told him to get ready. That bossy Clover was going to have at him! Clover doesn’t cotton to strangers, not in her goat yard!

He ran into the yard and Annabelle said, “WHAT’S THAT?” 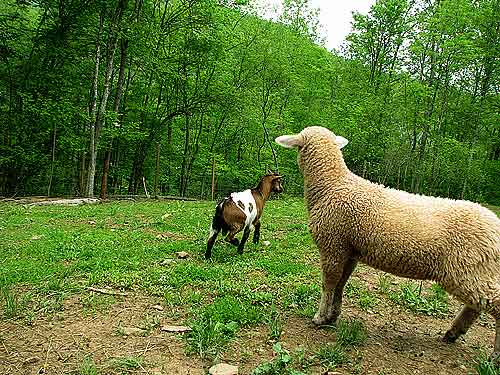 He even did a little dancing leap. 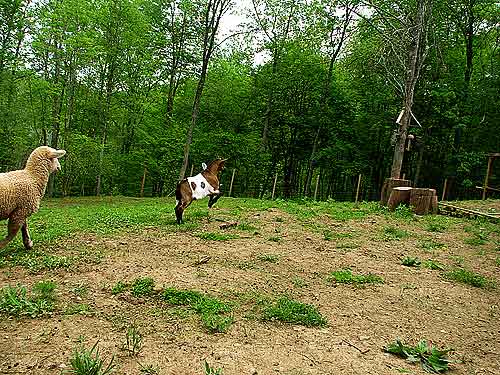 Annabelle thought he looked like so much fun! She can leap, too! 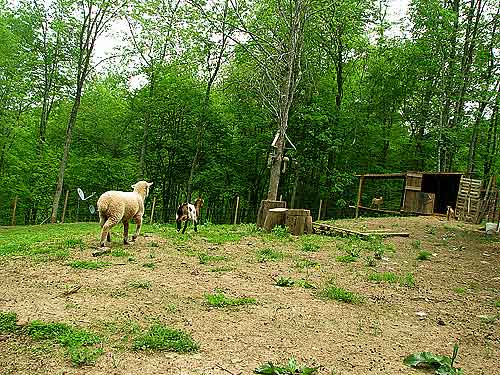 She couldn’t wait to get to know him better. 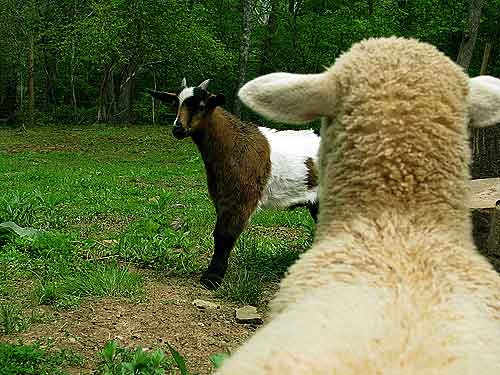 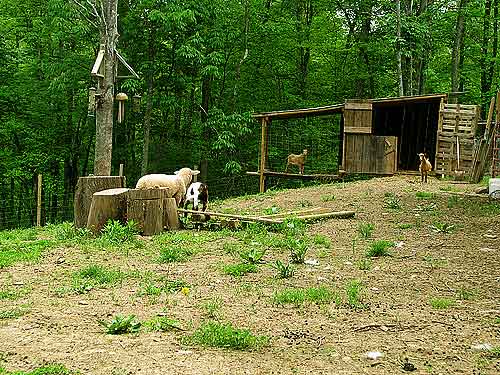 Annabelle had a sinking feeling. 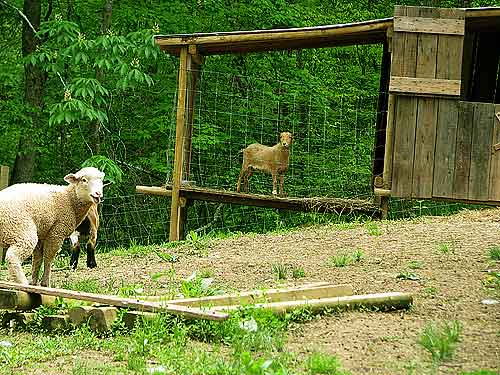 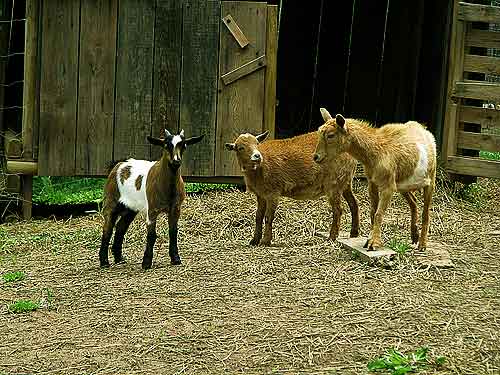 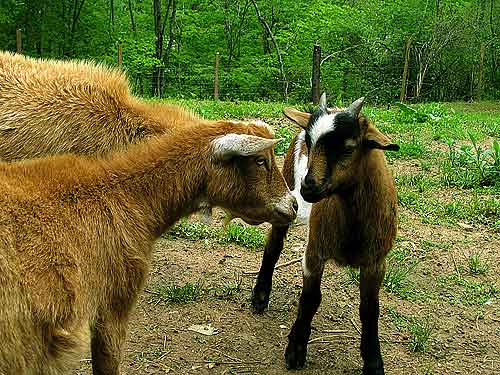 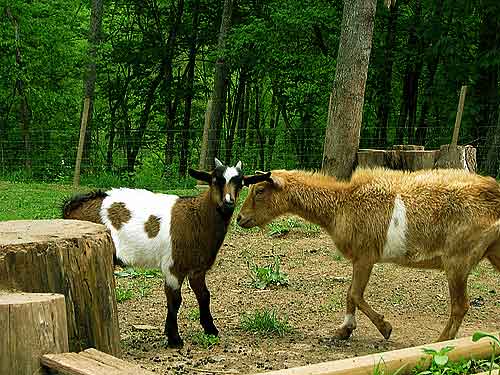 Nary a head-butting to be seen. And can you blame them for being smitten? He’s a beautiful goat. I love his markings. 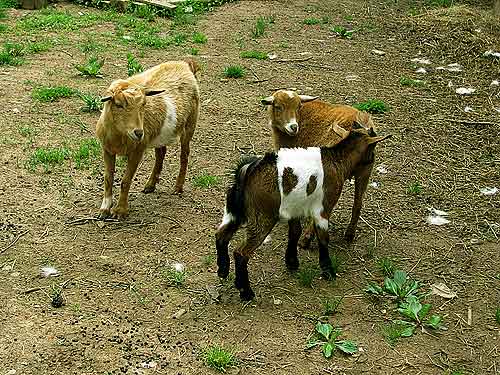 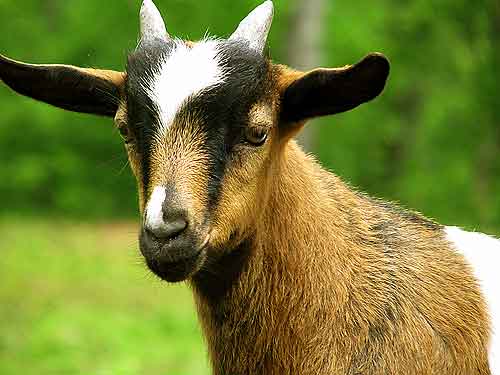 Well, when he grows up some day. He’s just a baby now. He’s two months old, and still, in odd moments, looking around the goat yard crying for his mama. Clover and Nutmeg tell him everything will be okay and they show him where the good grass is. Eventually, he’ll have to be separated from the girls and a more suitable companion arranged. He needs a little girl fainting goat. A Sprite to his Pepsi.

And speaking of that fainting thing……

The kids could hardly wait to see him. I haven’t seen them so excited over a farm animal since…..never.

They wanted to make him faint. Weston had to be sure he wasn’t a defective fainter.

He rushed into the goat yard, ran at Pepsi, waving his arms and making noise.

Pepsi fell over on his side like somebody’d shot him with a rifle. 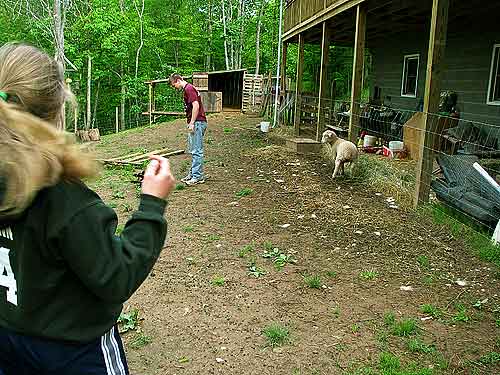 Yeah. See the little dark hooves just to the left of MORGAN’S FIST THAT SHE STUCK IN FRONT OF THE CAMERA AT THE VERY INSTANT PEPSI FAINTED? Those are Pepsi’s hooves as he’s flat out out his side in a dead faint.

The other animals didn’t know what to make of this bizarre moment, though the children found it quite amusing. It was pretty funny.

Except for the part where Morgan stuck her hand in front of the camera.

Weston strode away quite satisifed. 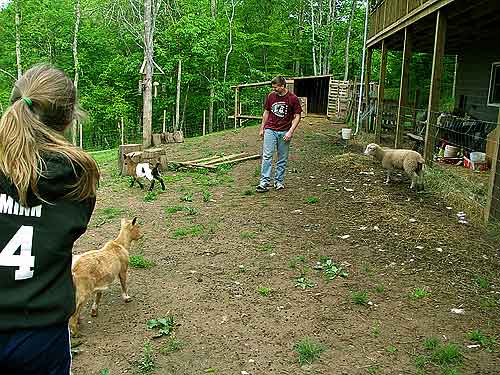 He said, “I pronounce him to be not defective.”

His job was done.

Me, I’m left with no photo of the fainting and I wouldn’t let them scare him again.

We left Pepsi, who got right up and back to normal as if nothing ever happened, to carry on settling in with his funny herd of Nigerian Dwarf goats and a lamb who thinks she’s a dog. 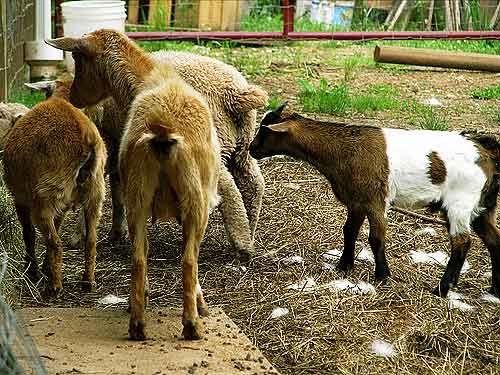