In the beginning, there was Mr. Duck and Mrs. Duck. 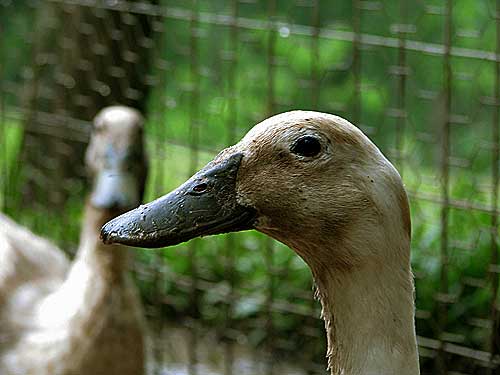 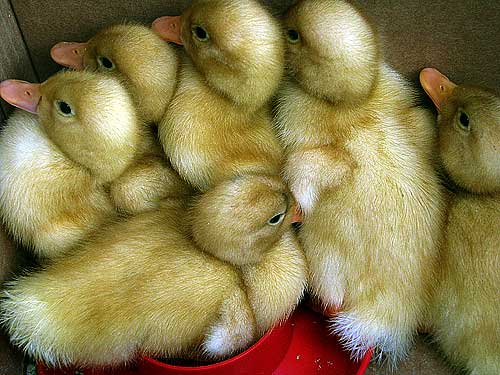 ….of the pekins. The six ducklings needed a mama and papa. A duck family.

No duck ever likes to waddle alone.

Then came more and more chickens. 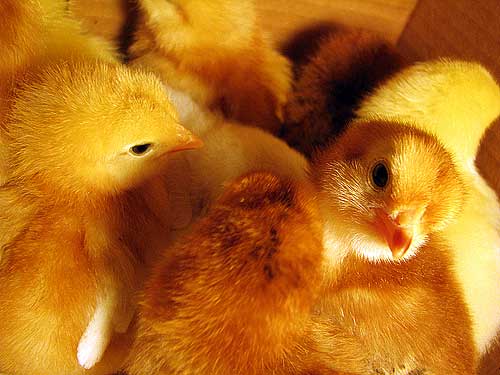 And even more ducklings. 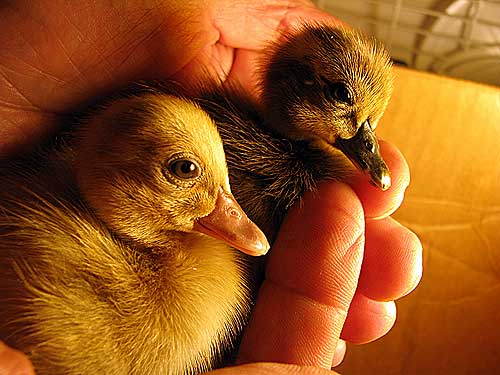 Altogether, I hatched three of Mrs. Duck’s eggs in my incubator.

But eventually the chicken yard was crowded and the pekins were all grown up, so….. 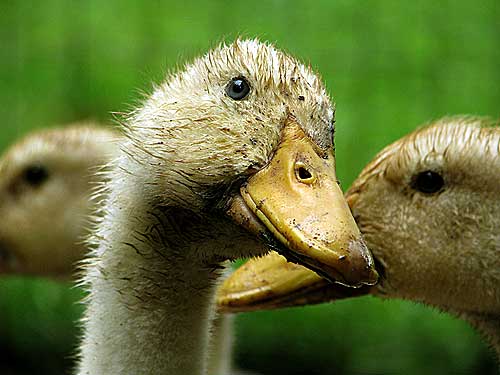 ….off they went, to the duck pond.

Mr. and Mrs. Duck stayed in the chicken yard to raise the new ducklings. Their very own babies!

Only a funny thing happened on the way to becoming one big, happy duck family. Mr. Duck despised, loathed, and abhorred those three ducklings. Perhaps because the tyranny of chicken rule had shrunk his heart two sizes too small. Or perhaps because those ducklings were……boys? Mr. Duck could barely tolerate them. Not near his precious missus! Around and around the chicken yard he chased his own offspring.

Meanwhile back at the Bermuda Triangle aka the pond, those six ducks were slowly disappearing. 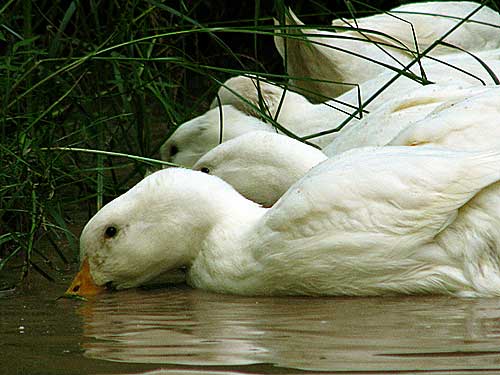 They couldn’t come back to the chicken house at night because the young chickens and ducks were shut up in there. They had their own little duck house, but they didn’t grow up in that duck house and they refused to sleep in there at night. My older chickens, who were already free-ranging, were happily roosting at night with the barnyard animals, so they were safe. But the six pekins–

Where did they go? There was never a feather to be found. Had they been killed, snatched at night, or had they simply, sadly, run away to the river? 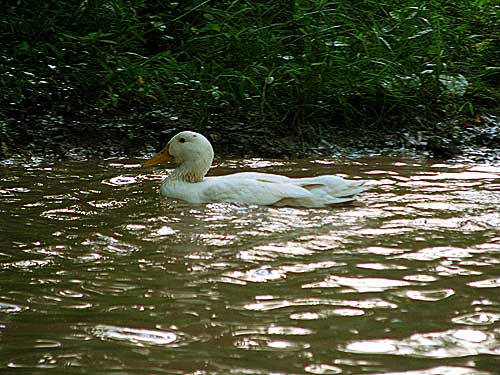 One sad, lonely duck. Because you know that no duck likes to waddle alone.

I vowed never to put ducks on the pond again if they couldn’t come back to spend the night in the chicken house. (I’m planning a second chicken house for the spring that will be for confined babies so there will always be a chicken house available for the free-rangers.)

While the pekins were disappearing, the young chickens and ducks were growing up, and were finally grown up enough for a big graduation. Mr. and Mrs. Duck, their three now-grown ducklings, and the chickens burst into the world. Mr. Duck was so happy to be out of the chicken yard! 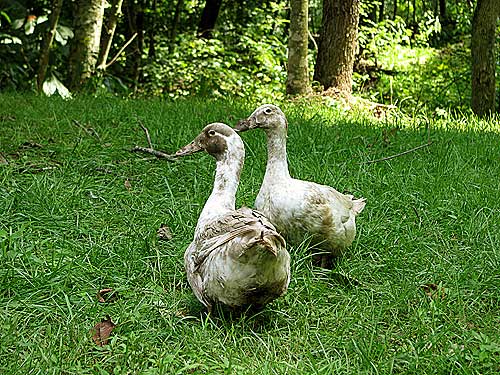 He and Mrs. Duck go one direction during the day on their romantic adventures while their three offspring go another, not meeting again till they go to bed at night in the chicken house, which is all the time Mr. Duck can tolerate them. 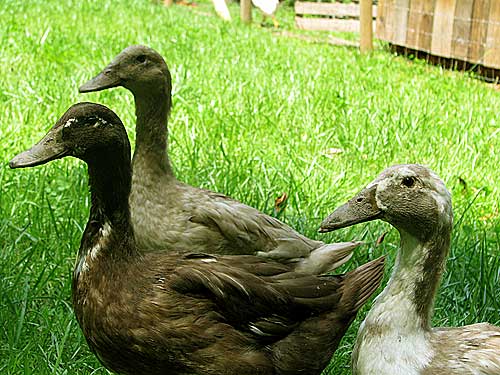 Meanwhile back at the pond again…. The lonely duck quacked and quacked. And have I mentioned….it’s a girl? She knew there were other ducks…..somewhere. She could hear them. I worried about her. She wouldn’t leave the pond. I knew, just knew, that soon, very soon, she, too, would disappear. (Have you ever tried to catch a free-ranging duck?)

But then Mr. Duck’s heart, once shrunk two sizes too small, nigh burst out of his chest, and apparently Mrs. Duck’s heart is two sizes too big. He and Mrs. Duck went down to the duck pond and they took that lonely pekin under their wings. They showed her the chicken house and she showed them the pond. They make sure she tucks into bed at night safe and sound in the chicken house, and together, Mr. Duck and his two ladies, they have romantic adventures all day long. 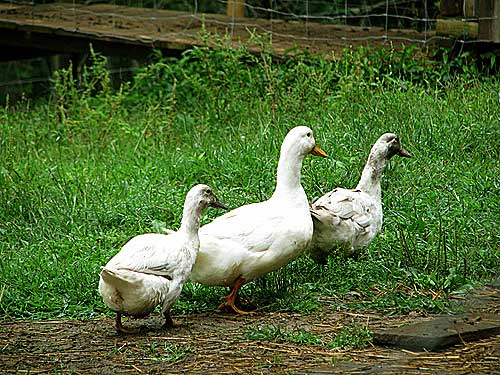 Because no duck should waddle alone. 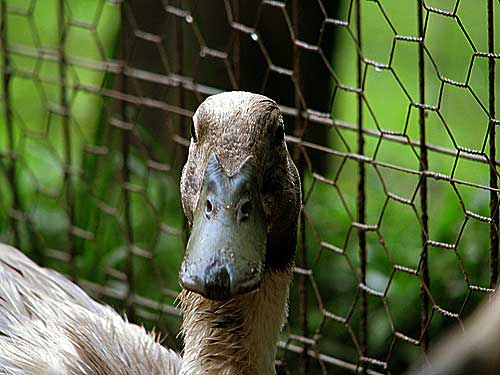 And then they all lived happily ever after. 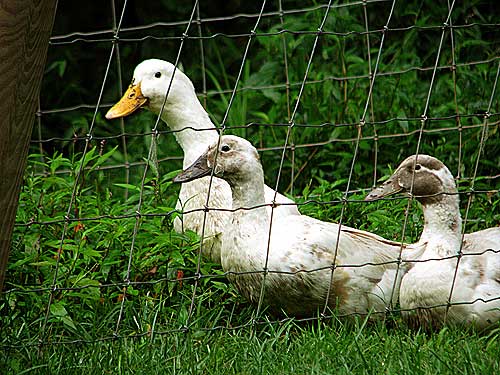