Buttercup is my oldest cat. 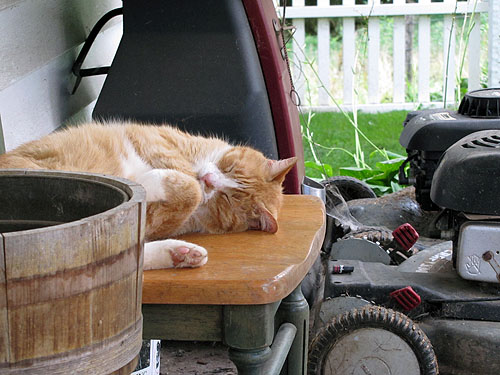 He spends a lot of time sleeping. Not that this isn’t normal cat behavior, but he seems to spend more time sleeping than normal even for a cat. Maybe because he’s getting old. 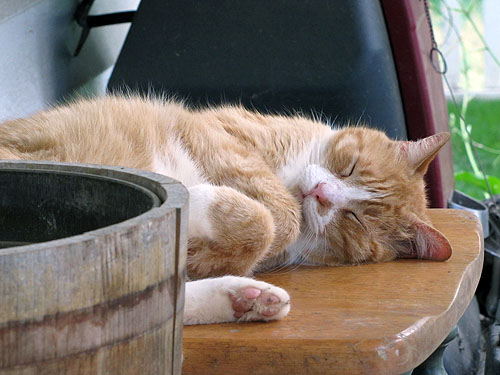 He’s 14 years old and has been with me longer than any other animal I’ve ever had. He’s been through multiple moves. He started out in the suburbs of Texas then moved to North Carolina and subsequently on to West Virginia–from the Slanted Little House to Stringtown Rising to Sassafras Farm. He probably wouldn’t be surprised if I moved him to a space station on Neptune next. 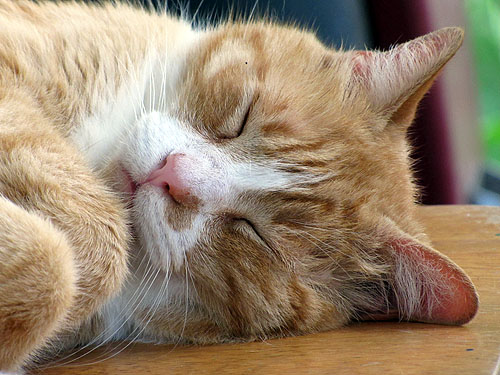 He didn’t make it this far in his cat life without being suspicious. He’s a mean cuss–to most people and all other animals, especially dogs. He was a kitten when I found him hanging from a tree limb in my yard in Texas. At the time, I was cat-less as my first two cats had passed away. My then-husband was happy that we had no cats, but what could I do, this one came to me in a tree? I promptly acquired two more kittens and told him that I had also found them in the tree, though I’m not sure he bought that story after the first time.

We had a dog named Blossom then. Morgan named one of the other new kittens Bubbles, and Buttercup got his name. If you don’t know, Blossom, Bubbles, and Buttercup are the names of the Powerpuff Girls from the popular cartoon. Blossom (the dog) and Bubbles (the cat) were girls, but Buttercup (the cat) was a boy, and being named after a Powerpuff Girl might at least partially explain his foul temper. And he is the most foul-tempered cat I’ve ever had. He routinely hisses at dogs if they come near his air space. He won’t speak to other cats. He rejects (with claws and crazy hissing) the touch of any human other than me. It’s not uncommon at the vet’s office for them to call in extra assistants and put a cone on his head just to give him a checkup and shots. He does, however, love me! He has been my constant companion for all these years and loves most of all to sit on my slippers.

One time in North Carolina, I came home on a winter day to find the two dogs we had at the time had chased him into an icy creek. It was winter and he was hanging from a fallen tree limb over the creek, partially submerged, holding on for dear life to that branch. I barely managed to disengage his desperate claws, wrapped him in a towel, and took him to the vet. He was suffering from hypothermia and had to stay in the animal hospital for a few days. It cost a crazy amount of money to save his life. He’s survived dogs, young children (Morgan was THREE when we got him and loved to “play” with him), donkeys, goats, sheep, cows, chickens, and all the rest. As long as he can find my slippers, he’s okay.

He’s been through it all, and when I see him sleeping so much, I worry that he’s getting older and realize he won’t be with me forever.

Buttercup: “Woman, shut up. Just take me inside and–” 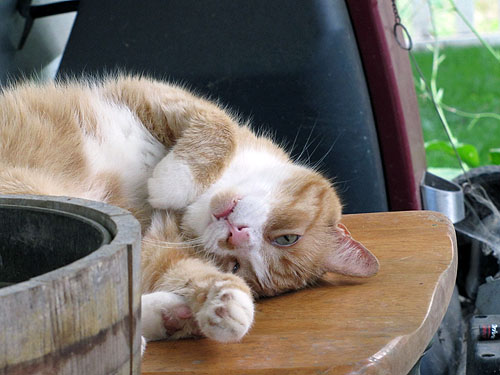 “….hand over the slippers.”

I love that mean old cat.