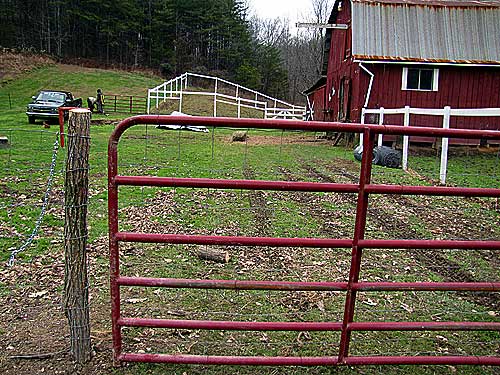 The superboys were back this weekend to finish the fencing that closes the gap between the barn and the goat yard (and connected pastures beyond). When I previously mentioned this project, I had several questions about gates. Yes, gates were placed at either end of the field to provide vehicle access to the barn and out the other side, where I plan to fence another field going up the hillside later. 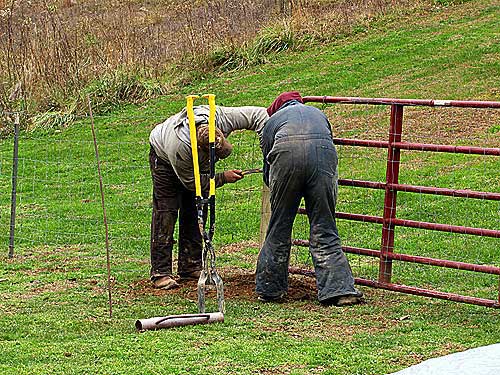 This was my very first fencing project at Sassafras Farm. I consulted with my farmer friend Pete, borrowed tools, acquired the materials, and picked up a few things at the hardware store.

I’m sure visiting the hardware store on my own will become a familiar task. I sought help immediately because wandering aimlessly up and down the aisles didn’t appeal to me. I told the man I needed fencing nails. He said, “You mean staples?” I said, “Okay.”

Then we went to look at chain for the gates.

He patted my shoulder and said, “It’s going to be okay, honey.”

Ever since I’ve been on my own, it seems like everybody calls me honey. Though I’m sure the hardware man thought I had “my man” at home working away while the clueless little woman went out to pick up a few supplies. I considered telling him I was running a farm all by myself, but I didn’t want to scare him. 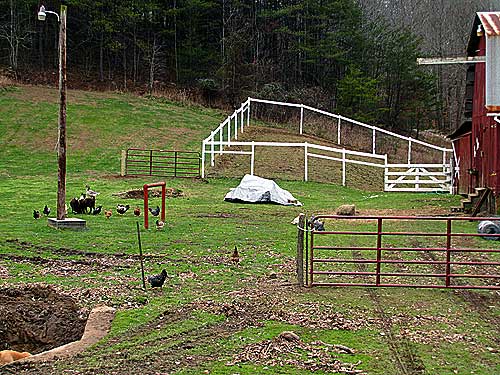 The red bar in the middle of the field is where they used to tie the horses. This field was at one time used as a riding ring. Under that tarp in the field is a stack of two-by-fours Morgan dragged out of the barn because it was blocking the stalls. I’m not sure where that’s going, but it’s needs to be moved at some point.

The goats and sheep were thrilled to get into this field because there’s actually still a bit of grass in there. 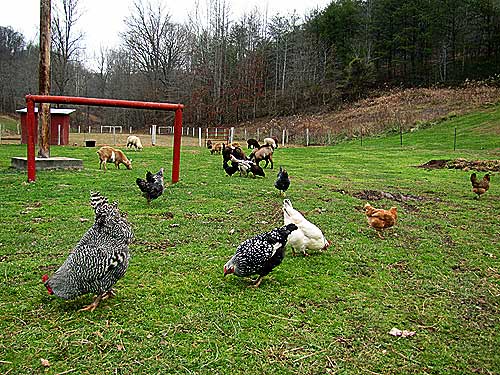 Closing the gap in fencing here will allow me to move animals from the furthest upper pasture all the way to the barn without ever taking them outside fencing, which is a real plus–especially when I’m moving animals by myself. It will also allow me to keep the goats and sheep closer to the barn so that when the snows come, I can easily get them inside to shelter in the stalls. There is a goat house in the goat yard–and the gate is open to that field for them, but this winter, they will be spoiled inside the barn. 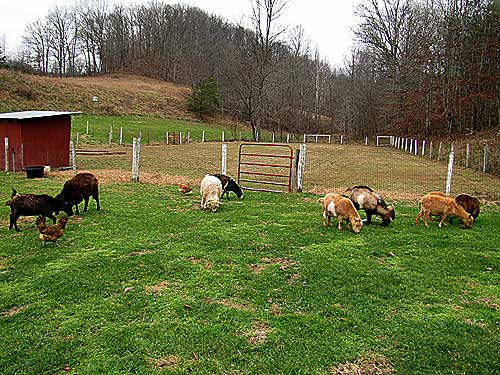 This will also allow me to simply toss hay out of the loft to them without carting it over. I think I’m getting lazier every day that I live at Sassafras Farm. 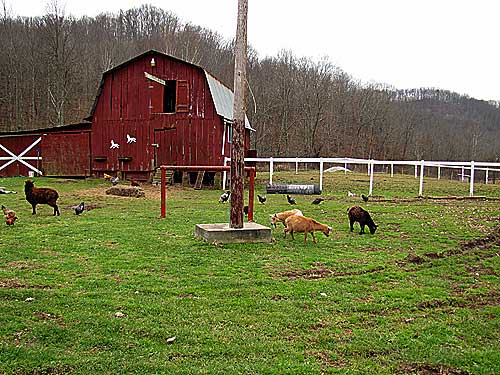 Then I had the superboys set my new sign post and hang up the sign and shovel out the clogged pipes in the culvert. Unfortunately, they couldn’t make much headway there. The trouble is too far down the pipes. This is a yet-to-be-solved problem. So I sent them away with some cash and two (each) hot ham and cheese paninis made with thick-sliced Grandmother Bread for their trouble. My last necessary winter prep project is now completed. Snow? (Where IS our snow this year?) Bring it on! Sassafras Farm is open for winter.