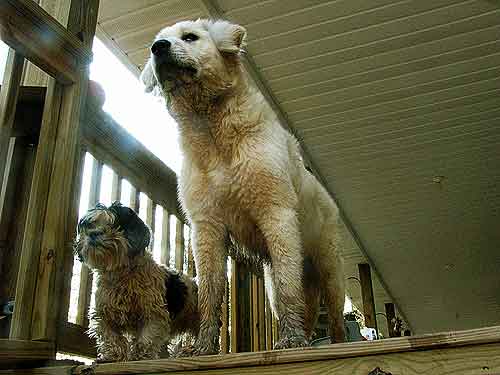 Coco the Giant Puppy rallied supporters in a final stump speech on the steps of what reporters are already dubbing the Hillbilly White House at her West Virginia farm late Monday. Fans were treated with a rare glimpse into the pup’s private life as well as the long-awaited, last-minute announcement of her vice presidential pick.

Coco: “My fellow Americans, we find ourselves at a pivotal moment in our nation’s history. Now is our time to make our paw print, to toss a new bone into the American story, to leave our pups a country that is freer and kinder, a country with more Snausages and fewer leash laws. This is our time to let our fur fly as we bound forward toward a new hope! I and my running mate, Dookie-the-farm-shih-tsu, will dream with you, not against you, and we will even share our blanket.” 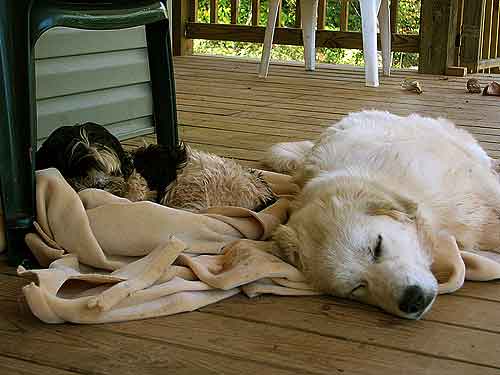 The Great Pyrenees pup has long touted napping as the cornerstone of her energy policy. 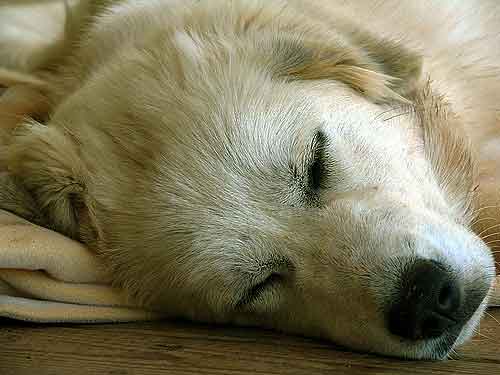 Opponents have criticized the Giant Pup’s energy stance as immature and a sure sign of her lack of readiness for the presidential role. Facing media scrutiny, Coco defied her handlers and answered questions openly at the farmstead Monday evening.

“I am far more prepared than any of my opponents,” the Giant Pup stated. “I’m always well-rested. Nobody makes good decisions when they’re tired.”

But can the Giant Pup, at six months of age, possibly have the sober judgment required of such an important job?

Coco: “I have never had alcohol in my life. I am perfectly sober.” 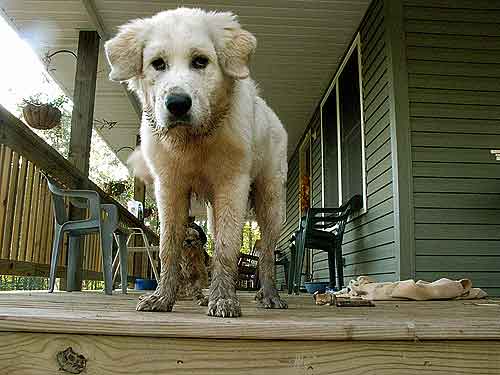 A number in the media questioned the VP pick as a ploy to put some age on the ticket. Is the farm shih tsu any more able, should events prove necessary, to take on the presidency in Coco’s place? Dookie did, after all, recently celebrate his 12th birthday, and his frequent shabby grooming could indicate more than hygiene troubles. 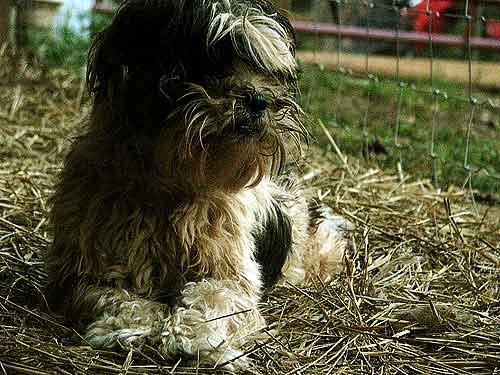 “I’m ready, willing, and eager to take the Giant Pup’s place in the Oval Office,” Dookie answered reporters. “I feel fine other than some slight skin irritation and creaky bones. I get up by noon every day.”

Did he mean ready, willing, and eager or ready, willing, and able? The possible slip brought up the question of conflict on the ticket. Who is the real top dog on the team? Is the Giant Pup a mere figurehead, the “rock star” personality paving the not-so-stylish shih tsu’s way to power?

Coco: “We are two mavericks, and sometimes we both get a little mavericky and we have our differences.” 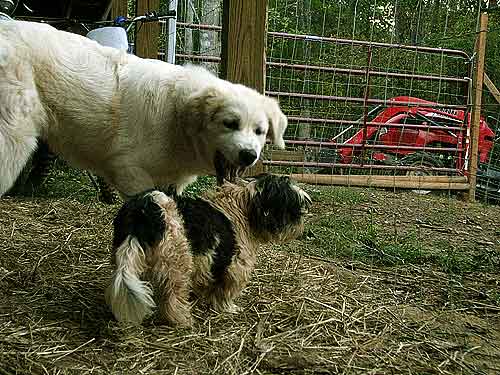 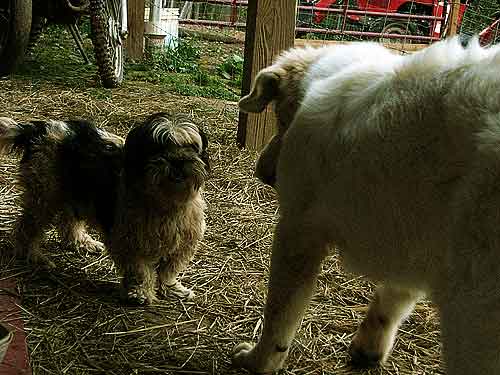 “And sometimes we argue.” 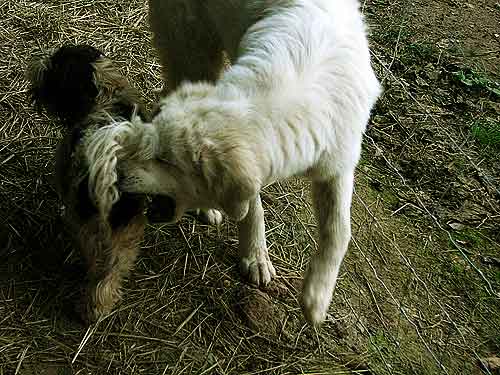 “But I am always the top dog.” 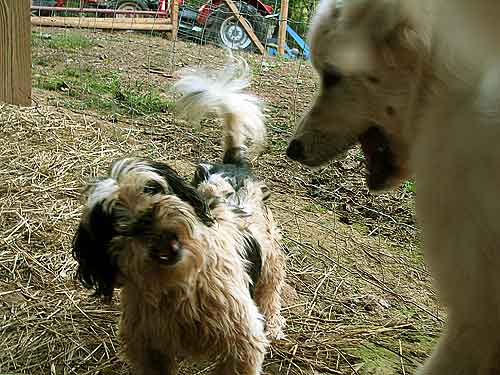 “Because he only comes up to my belly. Sometimes, he walks under it.” 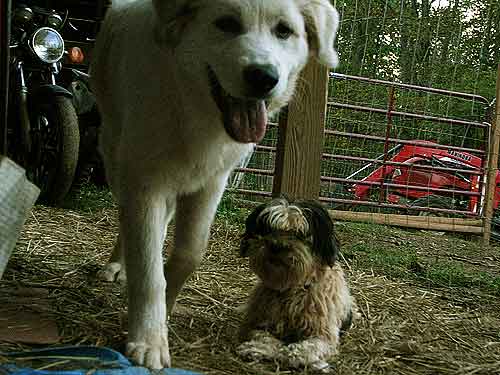 Does Coco intend to use her belly to handle the rest of the world? What is the campaign’s foreign policy? What about the economy, the environment, social security, tax reform? Why hasn’t the Giant Pup filled out her platform, addressing these other issues?

Coco was quick with her response. “Energy,” the Great Pyr declared, “is the key issue amongst all others, including foreign policy, the economy, the environment, social security, and tax reform. Without energy independence, we can do nothing. The future of our planet hinges on the choices we make. I choose to take a nap.” 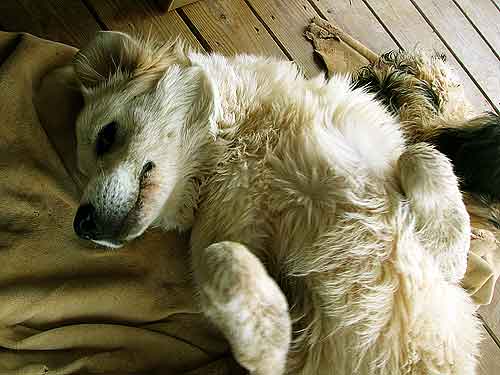 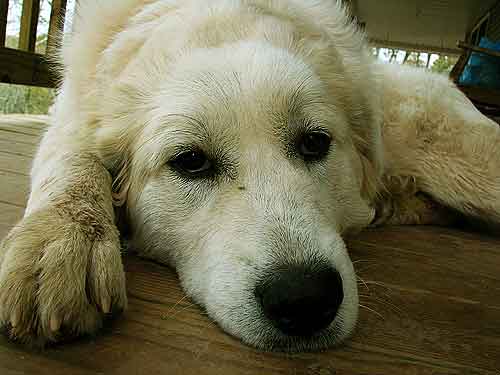 “Right after you VOTE GIANT PUP!”