Yesterday, I put Coco’s harness and leash in my Jeep. I always bring Coco’s harness and leash with me when I go to see her. I hadn’t been driving my Jeep because I never drive my Jeep unless I have to, and I had to yesterday because my cousin was fixing my latest Explorer problem. Most of the time, I leave my Jeep at my cousin’s house. The Jeep is weird and annoying and I don’t really like it. I bought it so my kids could drive it when they were learning. Only my kids never wanted to drive it. Because it’s weird and annoying and they didn’t like it. But my cousin likes the Jeep! Now that Ross has signed his old pickup over to me, I’m going to sign the Jeep over to my cousin. Because that’s what we do here. When we have a vehicle we don’t really like but someone else could use, we just sign it over to them when we get a chance. If everyone did that, no one would ever have to buy a car!

ANYWAY. I put the harness and leash in the Jeep and off we went to Charleston. I call about my Cokie Dokie on a regular basis to where they must be really tired of me, so I was surprised to learn when I arrived that they had just decided that it was time to take off Coco’s splint. I seized upon the opening to immediately say, “CAN SHE COME HOME?” We were in the visiting room with the assistant. She got the doctor. The doctor gave me a brief lecture about how I needed to take care of Coco if I took her home, then agreed I could take her home.

I sent Morgan to the Jeep for the harness and leash!

The assistant came back and said, “We will bathe her and groom her if you want and she can go home tomorrow.”

All the assistants came to say goodbye to her and tell her she was their favorite. She pooped in the back seat of the Jeep on the way home. I cleaned it up but I think the smell is lingering. I called my cousin and told him that I thought the value of the Jeep had gone down and now I might have to pay him to take it.

Coco was so excited the whole time. Every time I have visited her, she has behaved in a way that shows she wants to go home. Not that she was unhappy there. They doted on her. The assistants all told me over and over how much they adored her. But. She wanted to go home. It was sad every time we had to leave her because there was always such disappointment in her. She knew when Morgan brought the harness and put it on her that this time was for real. She was going home. 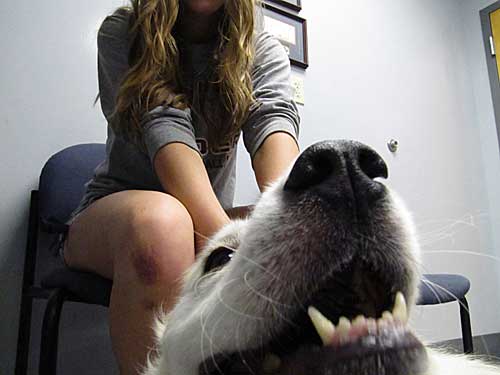 She’s on all four feet now. 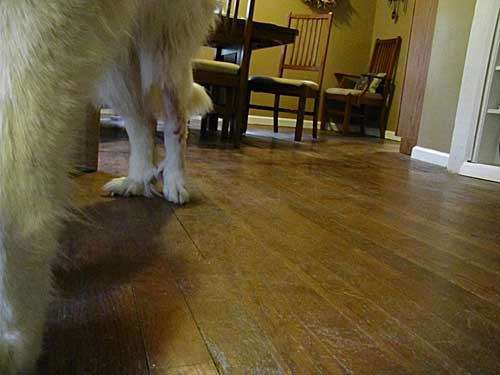 Her injury is healed (bandage all gone!), and her tendons have been strengthened by the splint, but the leg is still weak. She puts the leg down now and she walks on it, but she walks gingerly on it. It will take time for her leg to slowly strengthen. We don’t know yet what her full level of recovery will be. (She may always have a limp. That leg may always be weaker than her other legs.) Most important is to not allow her any setbacks from excessive activity. If she got excited and attempted to run and romp, she could easily damage her still-fragile tendons. She was discharged on very restricted activity. For the foreseeable future, she will be a house dog, taken outside only on a leash at duly appropriate times to potty and walk around a brief bit for limited exercise then it’s back to the house. She will have weekly checkups at the vet to assess her progress.

Chloe broke out of the barnyard twice yesterday (I’m working on this problem), so she and Casper were both outside when we arrived home. Ross held Chloe and Casper back while Morgan and I got Coco to the house. She met Chloe through the glass back door of the house. I let them observe each other for awhile, then took Coco out on the leash. I’ve never been quite sure how I would handle their introduction, since it would depend on all the variable factors that might be going on at the time. And as it occurred, it was just the most natural thing. Chloe was there. Coco was there. And my instinct of what would occur no matter how they were introduced, based on Coco’s temperament, was exactly what occurred. It was all just fine. Coco is one of the most patient dogs you could ever meet in your life. Chloe is bouncy and silly, but she was duly submissive of the queenly Giant Pup. 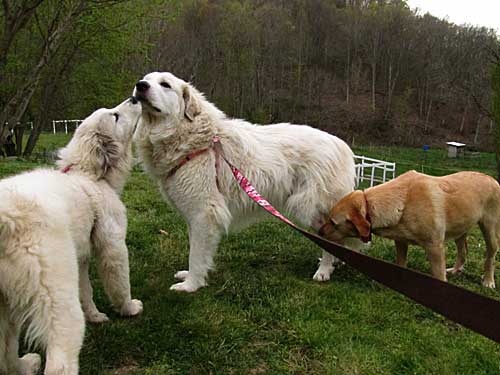 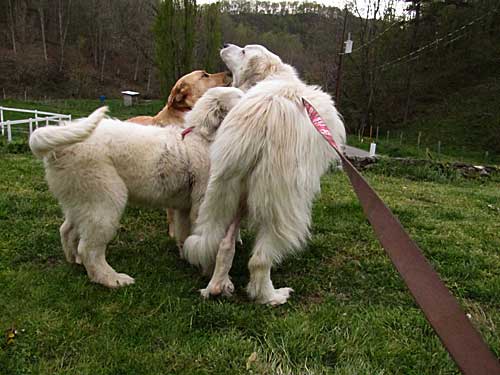 And Casper licked her and was very gentle with her–but so glad to see her. 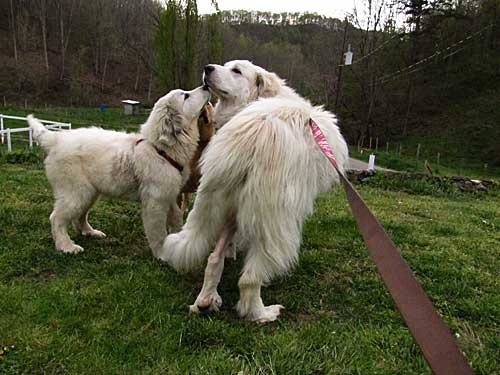 And Chloe licked her, too, and sniffed and backed off, and between the two of them, they knew their places. 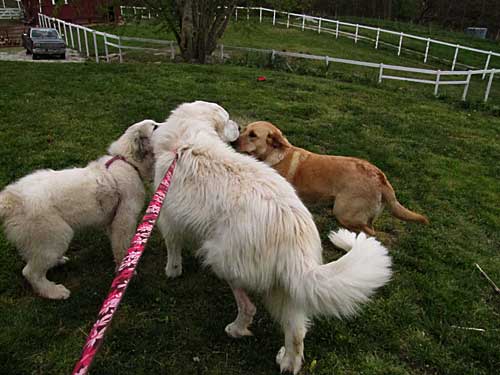 There was not a single bark or growl. 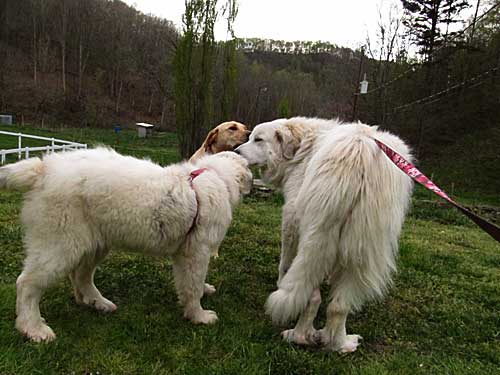 And then I took Coco back inside. 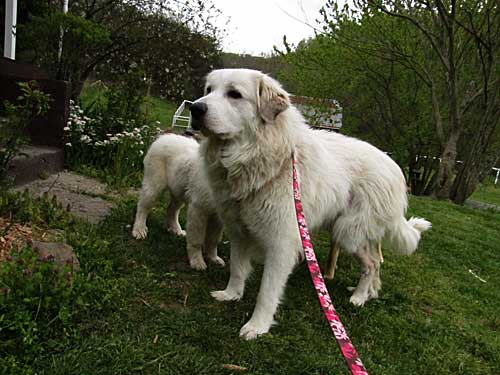 Tomorrow I’m going to fix where Chloe’s getting out of the barnyard, so Coco won’t see her quite as much, but they have met and they have agreed it is okay and everyone understands who is top dog. Coco just has that aura. It will be quite some time before Coco can go to the barnyard, and I haven’t taken her to see her goaties or Patriot or anything else yet because the fields are all further than she is allowed to walk.

Later, later, there will be plenty of time later.

P.S. If you’re new here and missed what happened to Coco, you can find the story of how we lost her here and how we found her here. She’s been at the animal hospital for TWO MONTHS.