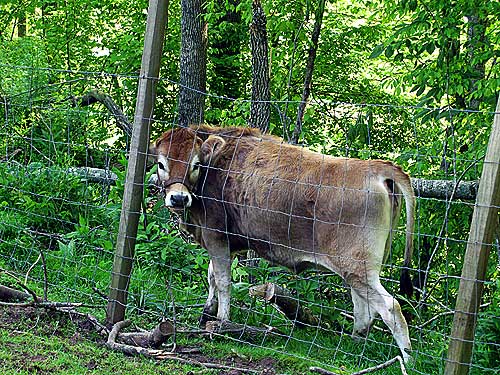 I always used to find it so funny when I’d see other people’s farm animals walking down the road. I still find that entertaining, partly because they’re not mine. There’s probably something universally amusing about animals getting one over on their keepers. One thing I’ve learned since starting to raise farm animals is that containment is an ongoing pursuit, not something that’s finished when the fence goes up. Some animals are easy to contain. They are complacent creatures who settle into their abodes without a peep. Others are free spirits and constant escapees. I can keep just about any hen I want to keep in the chicken yard. They can all fly out if they want to, but most of them don’t. Put the Crooked Little Hen in there and she’ll be out in less time than it takes you to shut the chicken yard gate behind you.

Mr. Pibb and Rhett lounge contentedly in the new duck ‘n’ buck yard while Eclipse is out every time we turn around. He takes Sailor and Pirate with him most of the time, too. They never come out on their own, but they will follow papa anywhere. 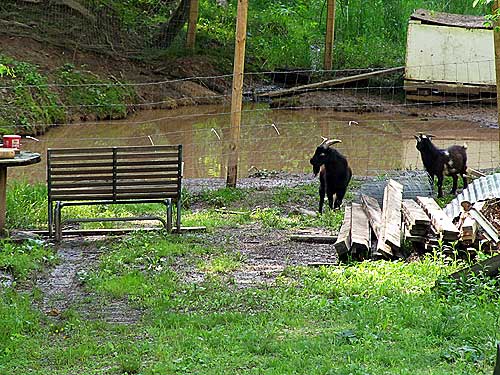 Eclipse was frequently escaping from one field into another down in the meadow bottom, too. That’s where he perfected his “under the fence” technique. He works on a section of fence until he pushes under and out. He’s doing the same thing in the duck ‘n’ buck yard. The solution to this problem is to weigh down sections with pieces of wood. It’s an ongoing process. When they get out, sometimes they let themselves back in, too. I’m starting to think I have free-ranging goats. You know, to go with my free-ranging sheep.

Of course, any farm animal will “escape” occasionally, by accident if nothing else, such as the time Jack and Poky got out of the goat yard by rubbing on the gate. The gate fell open when the hook on the gate got pushed up off the nail. They weren’t trying to get out. We’ve had sheep get out when storms mess up the creek crossings. Otherwise, most of the sheep stay put–except for the two free spirits, Miss Cotswold and the yearling, who practically moved in at an abandoned house up the road and started mowing. 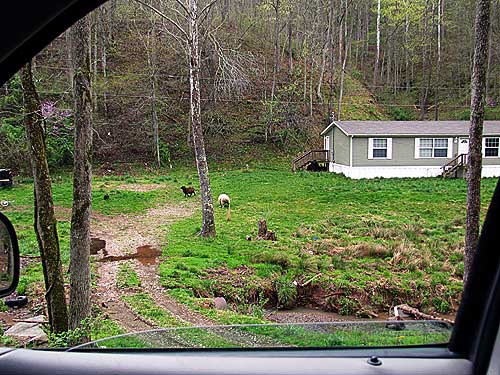 They were in and out (by themselves!) for the past month till we moved them all to Frank’s field this weekend. 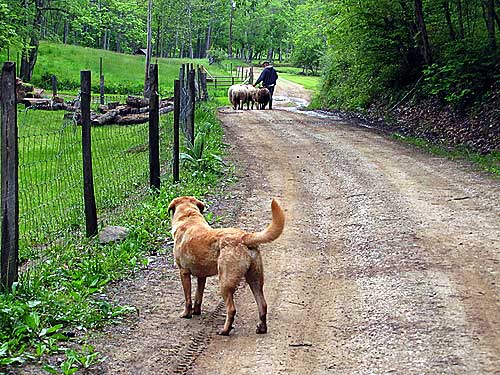 We kept the donkeys in one of our fields, shutting off the other two fields to grow. To keep the donkeys put while the sheep were moved, I just loved on Poky and let her nibble my fingers. Jack, of course, stays where Poky stays. 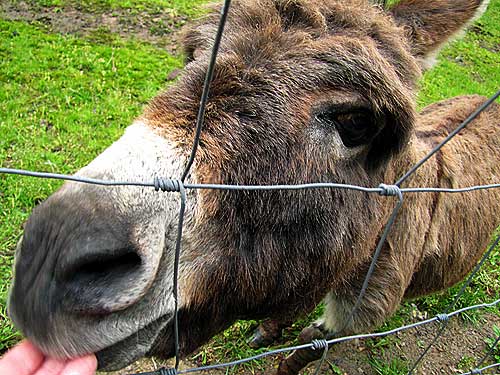 And the sheep trotted up the road to Frank’s field, which should keep them busily fed for at least a month. 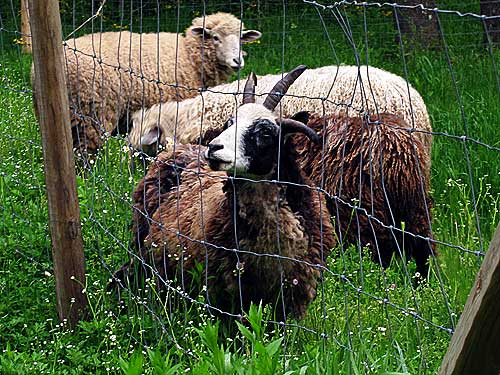 In the “nanny” yard, it’s always Nutmeg who gets out. As her other name is Rotunda, this is a conundrum since the less weighty mommies stay put while Miss Piggy seems able to squeeze herself anywhere, but it’s all about personality. Nutmeg is an escaper. Beulah Petunia has only been out one time, after leaning too hard on a section of field fence that had already been weakened by a tree falling on it in the meadow bottom. She’s a complacent personality. Glory Bee, on the other hand–

Yep, that’s the Giant Calf, on the other side of the goat yard fence. 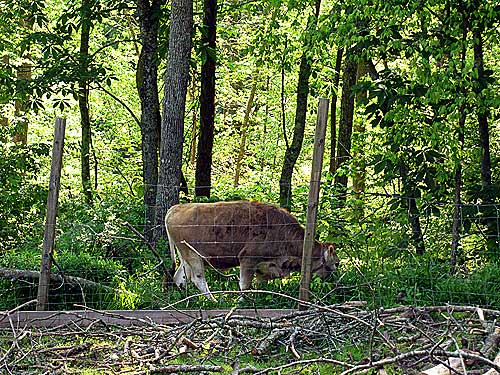 She possibly got out in this section that had been damaged somehow, I’m not sure. Maybe she damaged it by leaning on it. 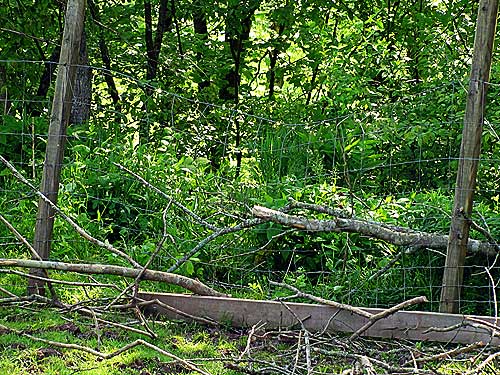 She’d never been out of the goat yard on this side before and she didn’t seem to know what to do about it so she just started eating. 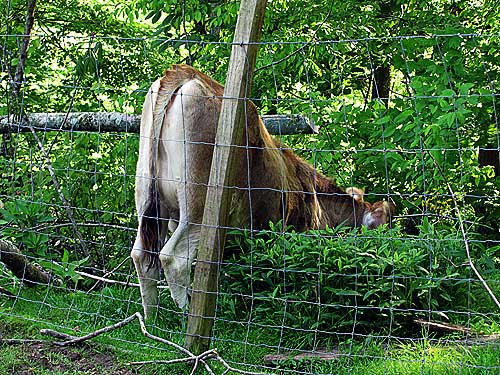 She didn’t seem to realize just how close she was to mommy.

This is Glory Bee, outside the fence, near the goat house. 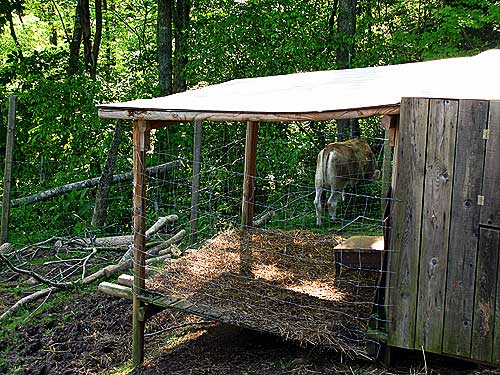 Pulling back for the big view, you can see how close she is to mommy. On the left of the photo (below) you see the goat house. In the middle is the chicken house. To the right you can see the milk stand (and BP). 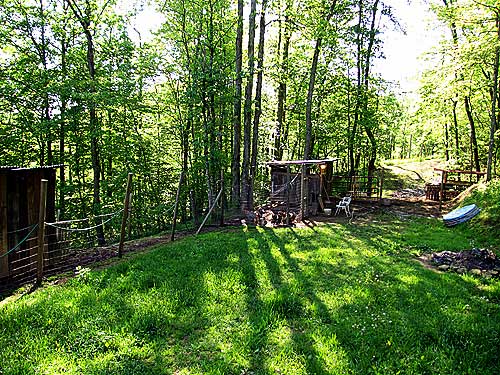 She was just around the corner from mommy, but didn’t seem to understand how to get there. 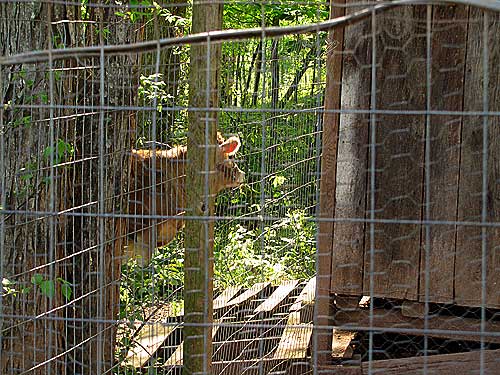 And we needed her to get there because capturing her in the woods wouldn’t be easy. 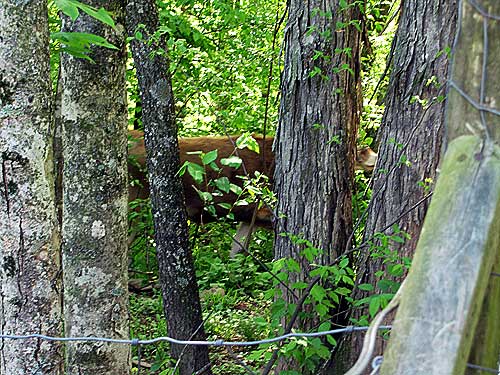 Worried she’d go down the hill, we started trying to get her over to BP-land so we could recapture her.

Meanwhile, BP was in a state of confusion. It was milking time and she didn’t know what to do or what all the fuss was about.

The epitome of the placid family cow, clocking in at the milk stand at milking time: 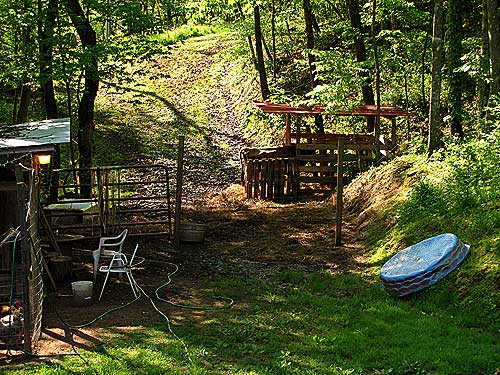 I had to lure her out with some food and help her notice that Glory Bee was nearby and provide some encouragement.

We eventually herded Glory Bee over to the fenceline and discovered (in the good news department) that she wouldn’t go through or under the electric fence. It’s nice to know she’s learned that she doesn’t want to have anything to do with that! 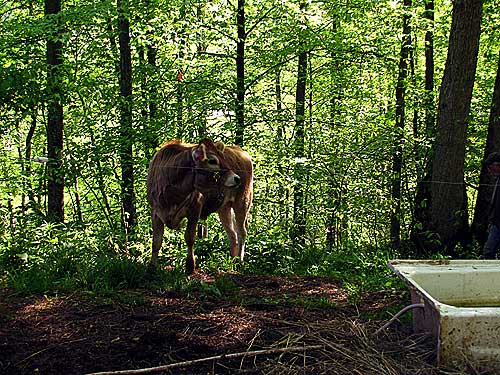 So, we turned off the electric fence and lifted it out of her way.

Glory Bee finally noticed that the electric fence had been moved and she made a beeline for The Trap (aka mommy). 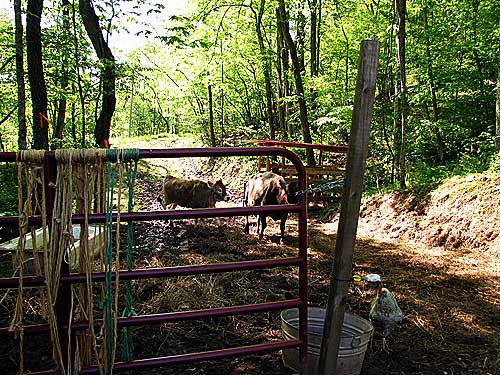 The lead got snapped right onto her halter and she was dragged kicking and screaming back to the goat yard. 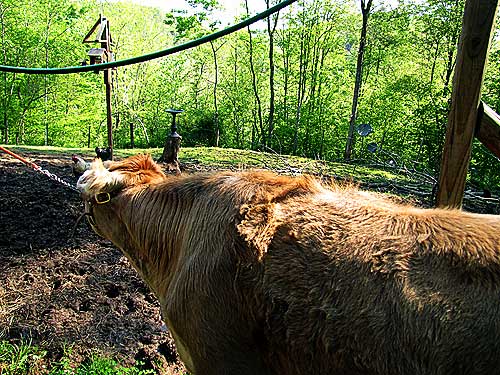 I milked BP. This whole thing started on Saturday. Glory Bee, anguished by that one mouthful of sweet mommy’s milk, was out again by bedtime. And this time, she and mommy weren’t waiting around for our next trick. Off they ran to the hinterlands of BP-land, clutching plane tickets in one hoof and hastily packed suitcases in the others.

They spent Saturday night and most of Mother’s Day together before we got Glory Bee in lock-up again. This time I had to pull my faithful calf trick because Glory Bee wasn’t falling for that stick-her-head-under-mommy scenario where she’s distracted for a second and we snap a lead on her. 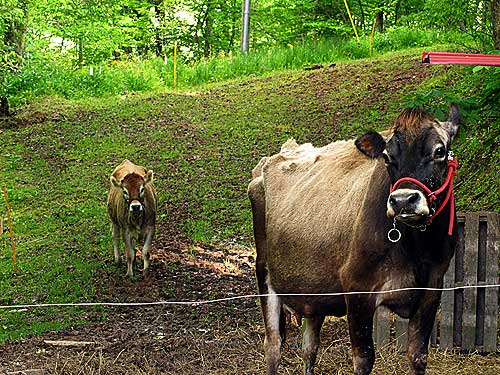 The easy no-drag way to get her in the goat yard is to just take BP over there and let her follow. She falls for that one EVERY TIME.

How that works is thusly:

Toss marshmallows in the goat house. Shut the goats up. 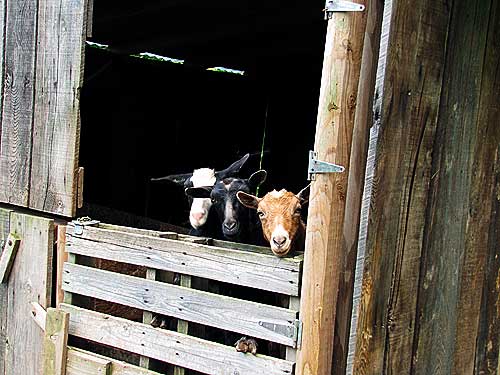 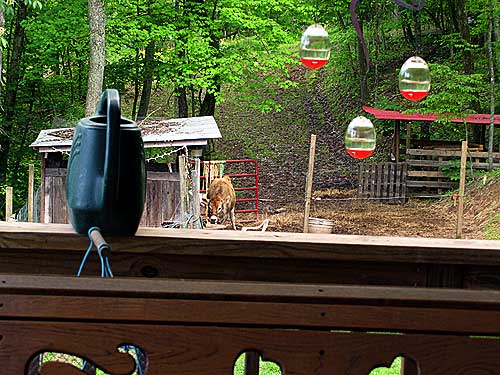 I wait on the porch. There she goes, through the gate of the goat yard! 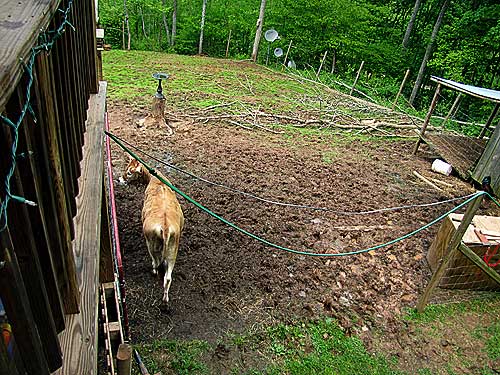 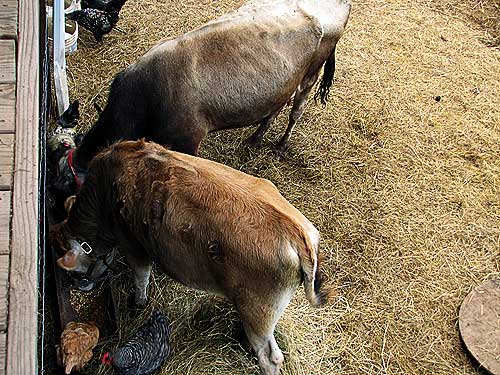 Then all you have to do is take BP back out, and let the goats out. 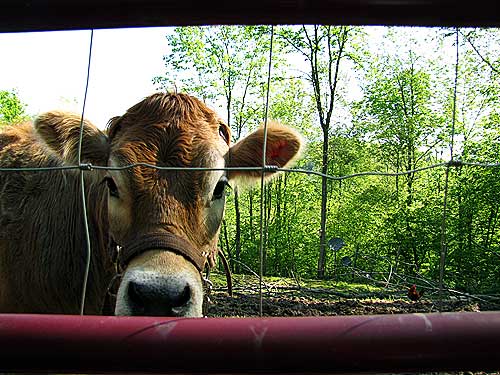