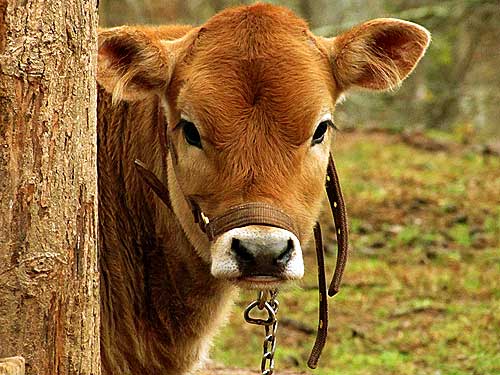 How many mistakes have I made with Glory Bee? Let me count the ways…. Let’s just call it ONE BIG ONE.

I had a calf bottle in the house before she was a week old. I intended to train her to take it, if for no other reason than if some necessity came up that required it, like some medication that might need to be given orally or even if something happened to Beulah Petunia. I had plenty of good advice here about starting early with the halter, tying for periods of time, getting her to take a bottle even if I was going to also keep her with BP.

But I floated along in my mother-baby fantasy world of sweetness and slobbery milk mouths, a scene I was loath to interrupt. I sank like a stone in my goat-keeping “wisdom” in which you can leave babies running wild with their mothers and they STILL LOVE YOU.

Cows are NOT GOATS.

By the time she was about a month old, I realized I had a big problem. She was nearly impossible to catch and she was gallivanting all over the place, unhindered by the electric fence. Just for starters, that wasn’t safe and she was going to end up with no concept of boundaries. We captured her and got her in the milk stand pen. She shared milking with me in the mornings, with me taking most of the milk, and I let her have all the milk in the evening. We got her disbudded and I “tamed” her with petting and scratching.

I still didn’t get it.

When it came time that she could no longer stay in there–she was getting bigger, and it was unhealthy for her to be so confined, I thought maybe I could take her back and forth from the goat yard. Hadn’t I tamed her down by now?

Taking her back and forth from the goat yard was a complete impossibility for me alone. Taking BP back and forth was doable, but difficult. There is an unfenced area between BP’s field and the goat yard, always leaving an opportunity for disaster. She had also worked a pretty good sore on BP’s udder.

This is the point at which I completely drowned and couldn’t see my way out of the problem. But okay! I would just get Glory Bee to drink from a bucket. Or a bottle. Or drink some water mixed with milk. Or some calf starter mixed with milk. Glory Bee, HOW ABOUT A TWINKIE WITH MILK?! I tried it all the past couple of days. (I didn’t really give her a Twinkie. Just sayin’.)

Meanwhile, I was getting further and further away from how I want to raise animals on my farm. And also becoming completely exhausted from constant efforts with Glory Bee. And starting to worry about Glory Bee’s health.

And then, in a lightbulb moment in which I could finally see the forest through the trees, last night, we took Beulah Petunia to LIVE in the goat yard. (At least temporarily.) 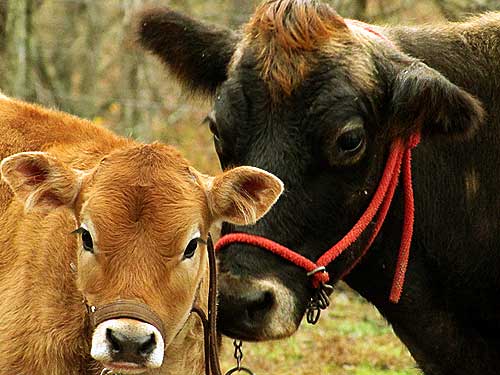 This hadn’t immediately occurred to me because it had been crossed off the list at the start when we brought BP up the hill. The goat yard is not a large area. It’s large enough that the goats can’t eat the grass down by themselves. We brought Poky and Jack up here this fall to eat the grass down before winter and over-winter them up here with the goats. But Beulah Petunia would eat down the grass in the goat yard for lunch. ONE lunch. However, it’s nearly winter now and there is no grass in the goat yard anyway. Everybody’s on hay.

I’m still keeping Glory Bee in the goat pen at night. I’m still keeping her tied during the day. She can be transferred the short distance between the pen and the tying tree without too much difficulty. BP is available without having to walk anybody through an unfenced area. I can milk BP first thing in the morning before letting her go to Glory Bee. BP is attracted to her food, so when Glory Bee is brought out, BP stays with me and the food. I have to milk her without a milk stand, but that is doable. BP doesn’t move around much once she puts her head in her food. After I’m done with her, she can go to Glory Bee where she’s tied. The other animals don’t get too much in the way. BP lets everybody know whose food is whose, believe me. (I’m giving food to the goats and donkeys at the same time to distract them from BP’s bucket-palooza of feed.) 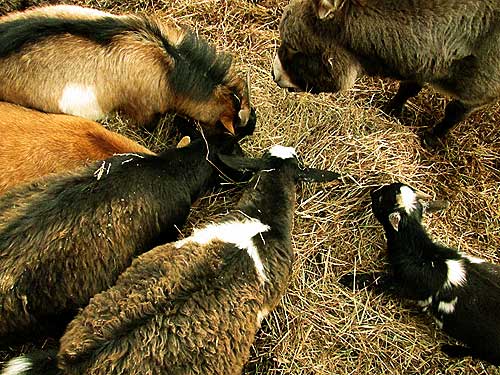 The main reason I think BP got such a bad sore is because Glory Bee got so big she could only milk her on one side in the milk stand. (The other side was too close to the side of the milk stand shed for Glory Bee to fit her growing self over there.) This meant all the udder-bumping took place on one side. Now, BP stands randomly and Glory Bee isn’t putting all her head-butting energy into the same place. I’ll be keeping an eye on the situation because I’m still worried about that. 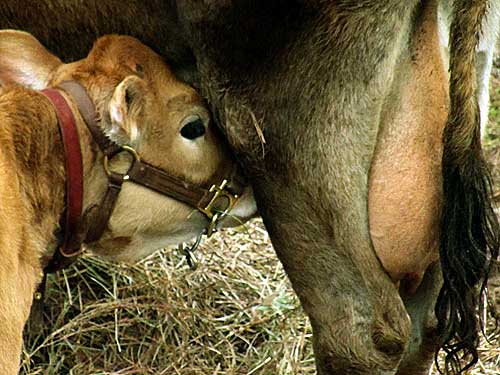 Sometimes mommy walks away. That is such a bummer. 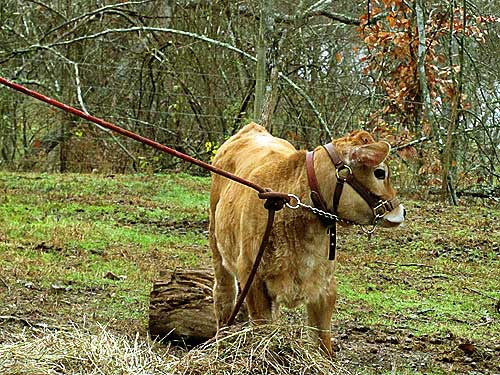 (And yes, I kicked all those logs away from that tree so Glory Bee can’t stumble over them. Those are “king of the mountain” goat logs.)

As I continue to work with Glory Bee, I hope that having mommy there will make her calmer. They are nuzzling and licking and being together. And when BP is through, she wanders off. Then wanders back. And nobody’s bawling anymore. They are separated at night, but they can be nose to nose at the fence all they want, which is calming for everyone. The goat pen has tight woven wire fencing, so Glory Bee can’t possibly nurse through it (it’s a fence designed to hold in baby goats), but they can be close. She has water, hay, and calf starter available in the pen.

All is quiet on the Western front. (Aka the hinterlands. Okay, it’s actually east.) 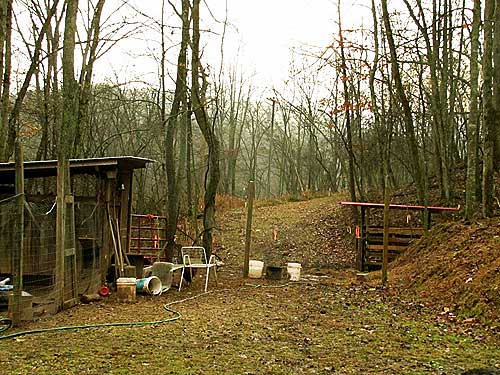 One side benefit to moving BP right now is that hunting season starts Monday. Her field goes straight out across our hill through the woods, bordering other properties. Much of that surrounding area is completely unpopulated, but is used by hunters, who might accidentally wander into the woods on our farm. I’ve been worried about BP being out in the woods when the shooting starts. We were going to string another electric wire so she couldn’t go very far back into her hinterlands, but now she’s much safer all-around in the goat yard in front of the house. This is another reason, by the way, that Glory Bee cannot, must not, be out gallivanting. Hunting is very popular in West Virginia. I don’t even like to go outside more than necessary during hunting season myself. There will be the sound of shots all around our farm starting Monday. (Hunting is so popular here, they close school the entire Thanksgiving week, starting Monday, for hunting.)

Back to BP and Glory Bee–this is not a perfect scenario, but it’s the best solution I could come to in the farm’s current setup, which is not ideally set up for dealing with calves. I’m continuing to tie and work with Glory Bee, BP’s udder has less chance of being hurt, there is no bawling, and it’s in line with my philosophy about how I want to raise my animals by keeping the mother/baby together (as much as possible). It also means I don’t have to milk twice a day. It’s less stressful for everybody.

And that is the anatomy of one great big giant mistake and how I finally solved it.

We’ll see how things are going tomorrow. I am a work in progress. 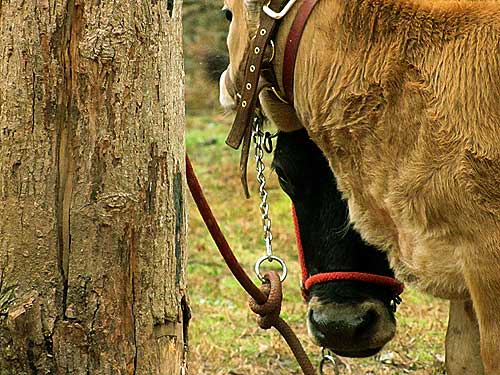 One thing I know for sure: Cows are NOT GOATS. And everything everybody was telling me about calves…. I get it now.