Me, sitting on an overturned bucket in the middle of our little dirt country road, pouring milk from my milk bucket into quart jars with lids so I can drive it up to the house without spilling it. 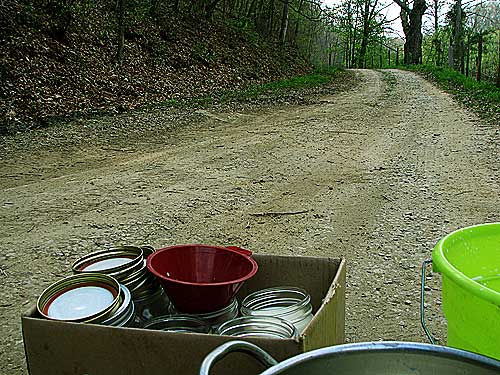 Beulah Petunia waits for me in the mornings by the gate to her field. She knows I’ll be along soon and she doesn’t want to miss me. 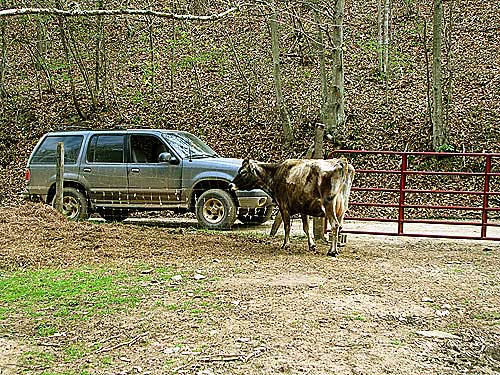 I come with the good stuff! Sweet feed and corn. I carry my milking bucket and other things across the creek and over to the sheep shelter where we have her stanchion set up then I go back for her feed. She knows what’s coming. She heads on into the shelter and gets in position. Waiting. Not missing a meal, our Beulah Petunia! 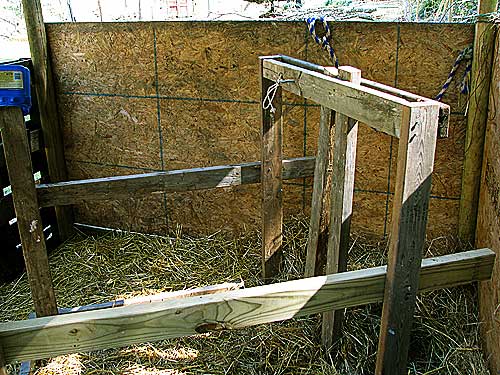 The offending pin that allowed her to release herself from the stanchion was corrected and milking went wonderfully on Thursday. I got a gallon plus 8 ounces. I was ready for more yesterday morning. Maybe a gallon and a half! We can do it, I told my pretty brown cow.

She said, “Where’s my food?” or something like that, and I gave her a big bucketful of the good stuff and loaded some nice fresh hay on top of it. It takes her a little longer that way to pick through the hay to her feed. When she’s sucked up all the feed she can find, she munches on hay and occasionally swats me with her tail to let me know that I am the slowest milk maid she’s ever encountered.

Jack has appointed himself the dairy supervisor. He’s the only one in the pasture with Beulah–the sheep have been shut off to another field due to interferences and bad behavior by Mr. Cotswold. Jack stands in the entrance of the shelter, sometimes stepping a little bit inside. He puts his big head on my shoulder while I’m milking or nuzzles my back.

What he’d really like to do is get some of Beulah Petunia’s goodies, but he’s a little scared of her so he doesn’t even try. Boomer attends every milking session, too. He considers it his moral obligation to be on-hand for all official farming activities.

Yesterday was my fifth day of milking. Quite a few challenges had been overcome and reconfigured. I had a stanchion! The pin holding the head-lock had been fixed! I had a new system for transferring the milk to quart jars with lids so I could drive it up to the house instead of carrying the bucket. I was tired, a little sore, but doing pretty good at the milking. And determined to up my bounty for the day!

I milk at about the rate of one quart per 15 minutes. I’d been there about an hour. I knew I had, or was close to, a gallon, and I felt really comfortable with continuing. We’re not done yet, Beulie Petunie, I told her!

Then I felt a disturbance in the force. Possibly, an earthquake. The ground was moving.

Or actually it was Beulah Petunia that was moving.

And she was moving WITH THE STANCHION.

She’d pulled her head back, and since she couldn’t get out of the head-lock with the faulty pin corrected, she just moved THE WHOLE STANCHION. Picked it up. With her head. And started backing out of the shelter with the entire contraption on top of her. Not, like, in a ferocious way or anything. She is not ferocious. She had been standing there letting me milk her quite calmly. She’s not a kicker. She was pretty calm about picking up the stanchion, too. Sorta like, “Excuse me, I’m done now.” Just very slow and methodical and UNSTOPPABLE.

Because a thousand-pound cow IS unstoppable. No need to be ferocious about it. She knows she is an Amazon.

“Martha Stewart is on now and I have go watch.”

And she plodded her leisurely way off across the field, taking her udder with her. 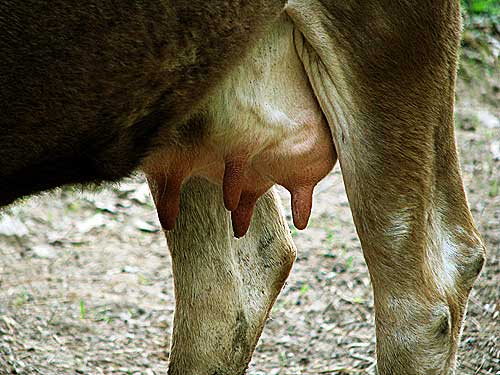 This is what the stanchion looked like when she was done with it. 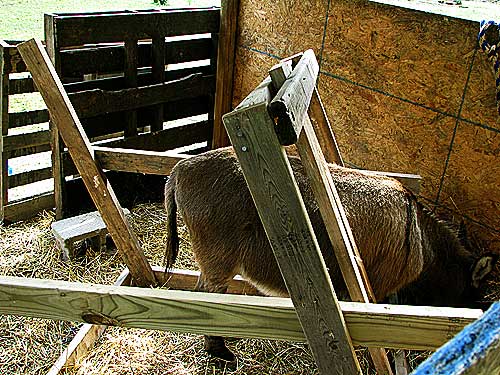 Jack helped himself to leftovers. 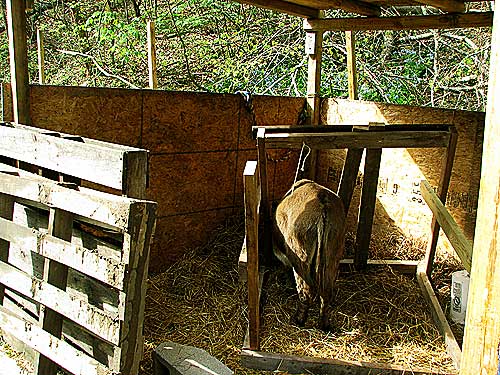 He knew all that waiting around would be worth it eventually.

The stanchion, version 3.1, is already being prepared. 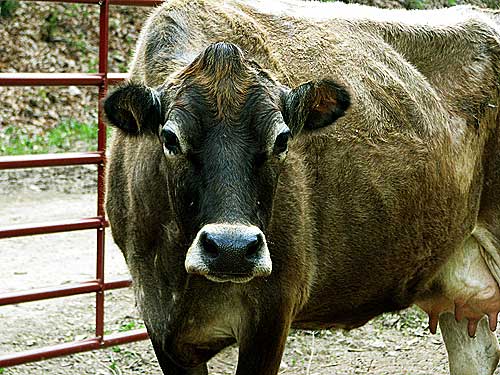 I think we should build it out of titanium this time–and bolt it to the Earth’s core.