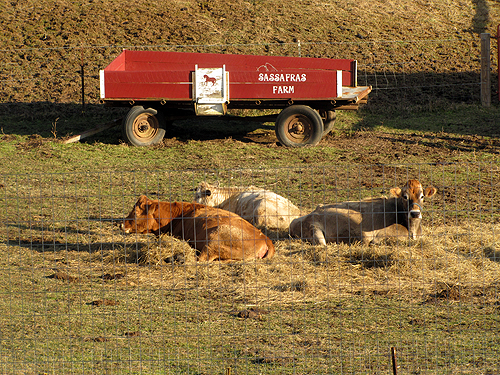 I’d post more pictures of the cows doing nothing, but they’d all look the same!

The cows are doing exactly the same thing right now as they were doing yesterday when I took this picture. I’ve been watching the cows for days, since I saw Dumplin standing for riding on Wednesday evening. First thing Thursday morning, I ordered semen, which was delivered by Friday afternoon. By Friday afternoon, the cows were doing nothing. The cows did nothing all day Thursday, too. I discussed the nothingness with the vet and we decided that it was too late to try to inseminate Dumplin. Dumplin and Glory Bee were synced up on their heat cycles last time when I had them both given the shot to throw them into heat and had them both inseminated at the same time. Glory Bee should be in heat. The other cows should be trying to ride Glory Bee.

The good news is that the cows are doing nothing. Maybe!

But it’s also frustrating that the cows are doing nothing because I don’t know anything for sure! Dumplin definitely went in to heat and was standing for it. She’s not bred. I’ve seen no attention to Glory Bee, no evidence of heat, no riding. But did I miss it? It should have been happening right around the same time as that happened with Dumplin.

I’ve got semen here since it wasn’t used on Dumplin, and if I see any riding going on with Glory Bee, then I can call the vet and there will be no waiting for semen to be delivered. The semen is still in the liquid nitrogen tank, undisturbed and unopened, and is good for about a week. If Glory Bee doesn’t show any signs of heat, she is probably bred. Unless I missed it.

Which means I have to watch again in three weeks to be sure, and I’ll have to try again to get Dumplin bred.

This is all a little frustrating and difficult and a lot of extra work for me, all this watching. Meanwhile, the cows are doing nothing!