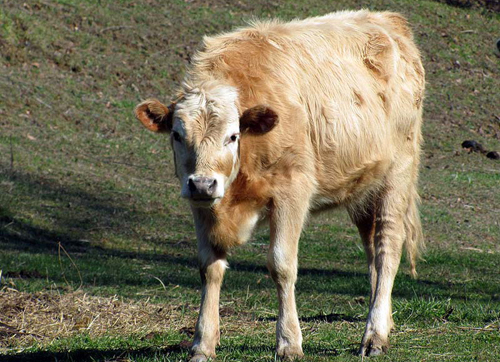 This is Gingersnap when she was baby, in one of my all-time favorite videos. That’s her mama, Moon Pie, with Gingersnap (her baby) on the left and Pumpkin (Glory Bee’s baby) on the right–both of them nursing on Moon Pie at the same time.

Gingersnap and Pumpkin were both born in early spring 2016, within a few weeks of each other. Their daddy was the Dexter bull I had on the farm in 2015. I always preferred Gingersnap over Pumpkin, considering Gingersnap the superior heifer of the two, partly because Gingersnap was naturally polled (which is a handy feature) plus I just liked her better. She was a mild-mannered little heifer, and when I say little, I mean little. Moon Pie is a smaller-statured cow than Glory Bee, and the daddy was a Dexter. It was clear from the start that Gingersnap was going to be a small cow. A small cow can be a handy feature, too, and if I’d kept either one of them, I would have kept Gingersnap. But if I keep every baby born on the farm, I’ll have a lot of cows in no time. I did have a lot of cows at that point, and last year started selling cows as the labor, fencing, hay, etc, was a lot for me to handle by myself. (Recall that also by this time Rodney had had his accident, leaving me with a different perspective on keeping so many cows.)

And so, despite the fact that I really liked Gingersnap, I decided to sell her. I sold Pumpkin first, before she was a year old. I had no trouble selling her, so I thought it would be a snap to sell Gingersnap, the so-called superior (at least in my mind) heifer of the two.

By this time, Gingersnap was around 15 months old. When she was 13 months old, I’d gotten the Jersey bull. Bo the Hereford had already been gone for a couple of months by the time the Jersey came. I’ve heard lots of bad stories about how mean Jersey bulls can be, but this one was really sweet. He was 11 months old when I got him. He came from a local Jersey dairy. 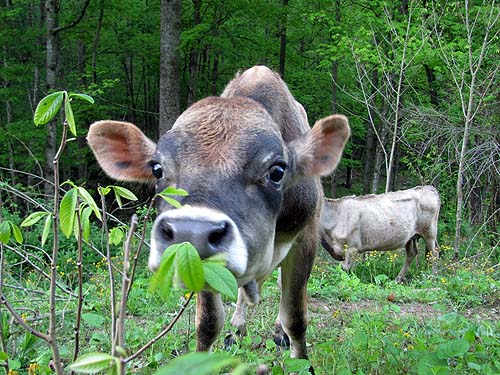 So Gingersnap was 13 months old and the Jersey bull was 11 months old. She’s small, of course, being half Dexter, and they were about the same size at the time. They buddied right up when he arrived and stayed fast friends for the next few months. I’d get up in the morning and look out at the field, often finding them snuggled up after spending the night sleeping together.

Now fast-forward to Gingersnap is 15 months old and I’m trying to sell her. Which I think should be no problem at all. She’s a mild mannered, pretty little heifer and she’s been with a Jersey bull for for a couple of months! Yet I had very little interest in her when I started trying to sell her. Everybody kept saying she looked too little. Finally a couple from somewhere a few hours away decided they wanted her. They arrived at the farm with their truck and trailer. The man took a look at Gingersnap and immediately I could sense he wasn’t that impressed with her. He said she looked pretty small and was I sure she was bred? I told him, as I had told his wife before they arrived, that she was half Dexter, and that she’d been with a Jersey bull for a couple of months. I hadn’t had her palpated, so no promises, but she was likely bred.

I had arranged for Ross to be there that day to help load her. NO cow likes to be loaded, especially when they’ve never been loaded before, and especially when there are strangers standing there and they’re being taken away from their mother, their family, their farm, and everything they’ve ever known. Gingersnap was no different, and she was, to be honest, a bit rowdy about it. We just about had her on the trailer when she backed out and ran off into the barn yard. After I finally got her back into the alleyway where we could start all over, the man suddenly said, “I don’t want her. She’s too wild.”

I said, “She’s just scared. She’s a mild-mannered heifer. She’ll be fine after you get her home.”

Then he said what he was really thinking. “She’s no bred heifer. She’s not even old enough to be bred. She’s not 15 months old. She looks like a baby still sucking on her mother!”

Gingersnap was so insulted. 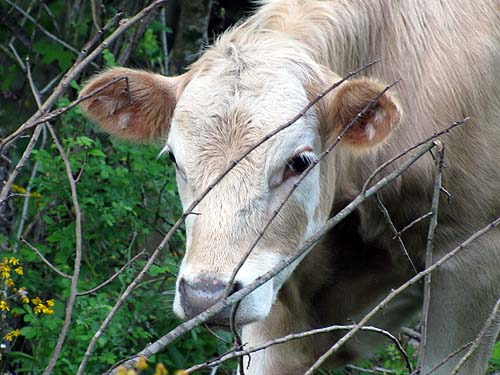 Clearly, he didn’t deserve Gingersnap, so I told him that if he didn’t want her, he didn’t want her, and that was all there was to it. I certainly didn’t want her going to a home where she wasn’t wanted! He slammed the back door on his trailer and he and his wife got back in their truck and they drove a couple hours back home, probably fuming all the way about how they’d been scammed into wasting their time on a baby still sucking on her mother when they’d come for a milk-cow–to-be.

And I was thinking, how am I ever going to sell this little heifer? And Gingersnap told all the other cows how mean those people were to her, and sucked on her mama some until she felt better about herself. Because she could be 15 months old, have a boyfriend and be bred, and still need her mommy, you know?

Well, not too long after that unfortunate incident I got a message from an older gentleman who was very interested in Gingersnap. I was completely honest with him about what had happened when the first people came to get her. I insisted he bring at least one other man with him, and I arranged for someone to be there with me, so there would be four of us–and three of them would be men. I wanted plenty of men on hand! I didn’t want any repeat of trouble getting her loaded. And I emphasized that she was a small sized cow, because she was half Dexter, and she was absolutely 15 months old! The gentleman told me not to worry about it, he’d had Dexters before. He understood what Gingersnap was, and appreciated her for it.

He came to get Gingersnap with another man, as promised, and I had another man there also, as promised, and Gingersnap must have recognized a kind man and a good home when she saw it because don’t you know she just walked right on his trailer like she was getting candy for it. Three men weren’t needed. It was so easy, I could have loaded her all by myself!

And guess what? I just got a message from that gentleman this weekend with an update on Gingersnap. A few days ago, Gingersnap had a baby! A little heifer. The daddy was the young Jersey bull, of course, so that man got quite a deal in Gingersnap–a sweet little Dexter girl with a bonus Jersey girl tucked inside. He sent me a picture of Gingersnap with her new baby. 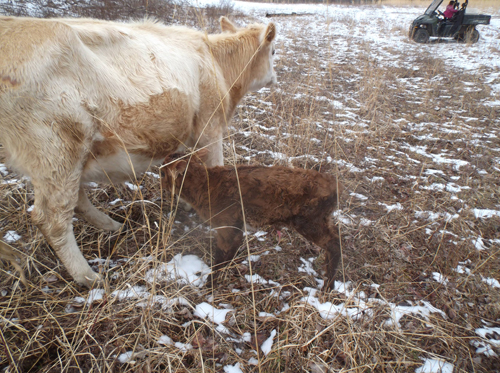 How’s that for the baby still sucking on her mommy now, hmmm? I think Gingersnap had the last laugh on that one! And I’m so very happy that she has a good home.

And as for the Jersey bull–he’s proven he’s up to the job now! I’m hoping he gives me a Jersey girl of my own–from Glory Bee.