Note: To those of you who read my farm animal stories with your young children by your side, please read this post alone before deciding for yourself how or if to share it with children.

Last Saturday was a lovely spring day, made even lovelier by your many kind birthday wishes. The house was clean, the porch swept, the animals munching peacefully in the goat yard, the roosters crowing, new chicks peeping in their brooder, and company on the way. All seemed right in Stringtown Rising Farm world.

At 2 pm, we found Honey down. We’d let him out of the goat house that morning. He’d eaten, browsed around the yard with Clover and Nutmeg. We’d looked at him directly as recently as 1 pm. At 2, he was down, couldn’t get up, and looked as if he might die. And we had no idea why.

Throughout the afternoon, we worked on various theories. Had he sustained some sort of internal injury? (There was no outward sign of injury, broken bones, etc.) We wondered if one of the big sheep had butted him too hard. Honey had a frisky little way of teasing them. Could he have had a stone, suddenly, lodge that quick and put him down? I administered vinegar, just in case, but there was no real sign that a stone was the cause of his distress. (A stone would usually be prefaced by a period of straining and crying, not cause a goat to immediately go down in such a severe state.) Could he have some other type of infection? What sort of infection would cause him to go down so fast with no clue in advance? His behavior throughout the morning had been normal. There are a couple of fairly uncommon conditions called goat polio and listeriosis that can cause goats to become very sick, but in both cases, there are usually advance symptoms and moldy hay/feed/silage is usually the cause (none of which is relevant here).

Our company arrived at the brink of this crisis, and did what they could to help–researching Honey’s symptoms on the internet while we were on the phone for hours. The first two hours were spent desperately pursuing mission impossible. Large animal (farm) vets are few and far between as it is (even in farm country), and on a Saturday afternoon before Easter? If we’d had a cat or a dog or a bird, there were emergency vets available. Not for a goat. In two hours, the closest vet we could find to call us back was in Maryland.

Honey appeared worse every minute. The vet we spoke with in Maryland told us to find some Banamine. Banamine is an anti-inflammatory that is sometimes administered for shock. She told us to call somebody with horses, that anyone with horses would have Banamine. By this time, we had called every vet in the phone book and were facing the panic-inspiring revelation that this was the end-all be-all of professional assistance we were going to get. An alternate title for this post could be “A Cautionary Tale” — a goat is not a cat, and after-hours/emergency care is not always available for farm animals. As one farmer said to me, “This is the ugly side of experience.” Now I know why so many farmers are amateur veterinarians–they have learned what we learned last weekend. And I also know why so many farmers are so generous in offering help in this type of crisis–they have been in our shoes and know how frightening it can be.

We spent the next couple of hours on the phone again–this time calling farmers. We started out calling horse farmers. None of them had Banamine. We called goat farmers. We called sheep farmers. We called farmers we knew and we called farmers we didn’t know. We’d call one person and they’d give us the phone number of someone else. We called friends of strangers. We had one phone line going all the time calling people and another phone line for people to call back where we had left messages. Everyone had stories about their own animals and advice. We went back and forth checking on Honey, looking at this, trying that. A farmer we’d never met before drove out to our farm and brought penicillin, administered the shot, and left us needles so we could give him more. (The penicillin was in case there was some kind of infection at work.)

But in the end, there was nothing we could do. By Easter morning, Honey was gone. This week, after several days of making Clover and Nutmeg GET UP!!! and prove to me they were okay every time they dared to so much as sit down for a minute (I’ve interrupted their naps so many times, they are barely speaking to me), I was able to get Clover in to see a vet for a thorough examination, to be sure there was nothing going on with the goats that I wasn’t seeing, and to discuss Honey. Clover is fine. The vet’s opinion, all things considered, as quickly as Honey was down and out, is that he most likely suffered an internal injury and, also likely, that we could have done nothing at that point to save him.

A popular book for novice goat farmers is Storey’s Guide to Raising Dairy Goats. (They also have one for meat goats, as well as guides for other animals.) The chapter on goat health includes this sentence near the beginning: “If an animal gets sick, all you need is the phone number of a veterinarian.” If writing this post makes one new goat owner throw that book against the wall and go out and stock up on emergency supplies, it will (almost) be worth having to write it. Last weekend, we had the phone numbers of dozens of veterinarians. What we needed were the phone numbers of other farmers and our own emergency medical supplies. Even if we couldn’t have saved Honey, we could have been better prepared to try. (Regarding the sheep, we are fencing this weekend to move them to a separate pasture, something we had already been planning. If it was indeed an internal injury caused by a scuffle between Honey and one of the sheep, it was a bizarre, isolated incident. Clover and Nutmeg don’t tangle with the sheep. Honey was a bit more frisky with them, and he did tend to dance around in front of them, taunting them.)

This is, by the way, unrelated to the decision to get Pepsi. As anyone knows who has lost a beloved animal, you can’t replace them. We’d decided to pursue fainting goats just a few days before we lost Honey. Pepsi does give us something to look forward to, though. Life on the farm goes on. I also want to say I’m sorry to bring you such a sad post, but I didn’t think it would be fair to not let you all know what happened to Honey. This is a real farm and these are real animals, and sometimes there is real heartbreak.

Honey was a little goat with seemingly no purpose in life. He didn’t have a “job” on the farm. He didn’t make wool or provide milk or lay eggs. He was wethered (neutered) so he wouldn’t breed, either. He was, in fact, free, a product of buckling overflow who came as an add-on with Clover and Nutmeg. He was, pure and simple, a pet, and he was a delight. He was sweet, somewhat submissive to the domineering does of his world, but he was a playful little thing. He loved to dance on two feet, and oh my, he was a tease.

He is dancing on two feet with angel wings now….. 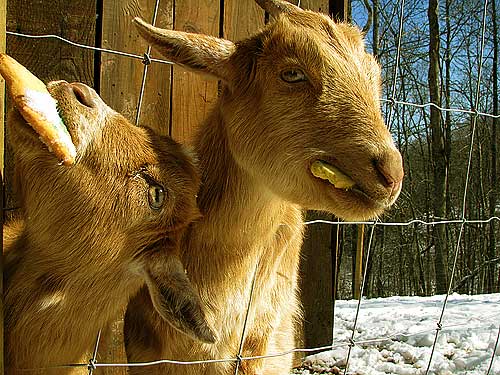 ….way up there, somewhere, in a sky full of cookies.