Beulah Petunia has lost her flower. And I don’t just mean this one. 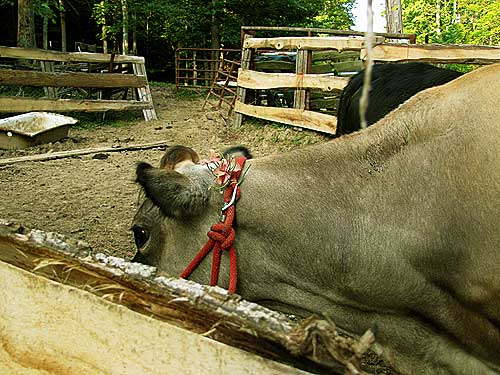 When I went to Skip’s farm to milk BP on Tuesday evening, she had company. 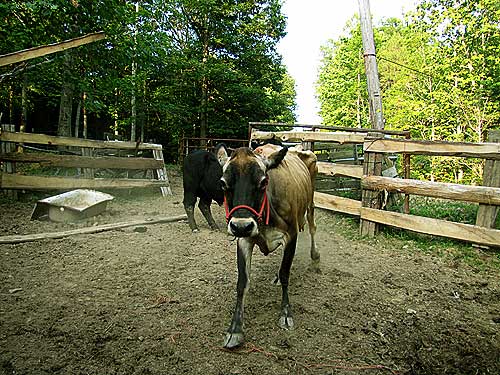 Meet Adam. (Skip does name his cows! Or at least, the bulls.) 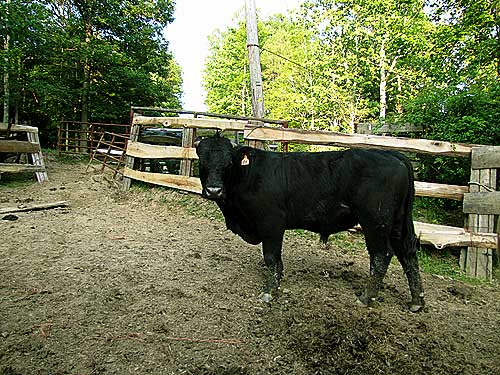 Adam is an Angus-Gelbvieh cross. Gelbvieh is a dual-purpose breed, raised for both meat and dairy use, and they’re often crossed with Black Angus, as is this one. They’re on the smaller side for standard beef cattle and make smaller (lower birth weight) calves, which is why Skip thought this bull would make a good match for BP. 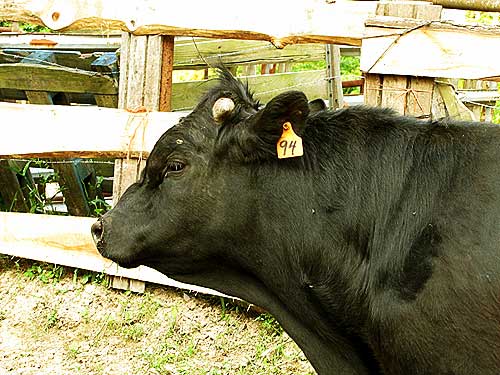 BP seemed quite happy with him. 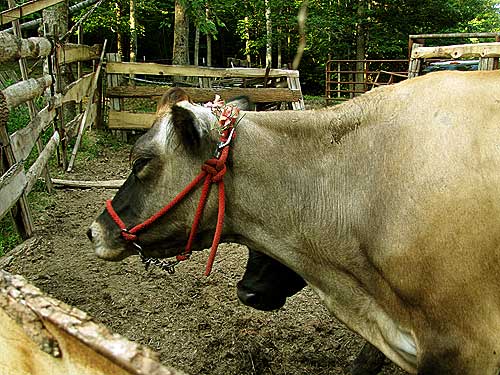 There was a lot of nuzzling going on. 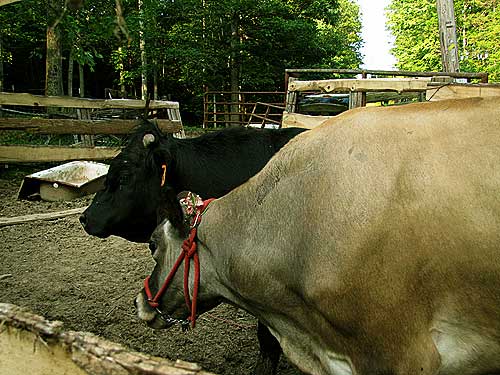 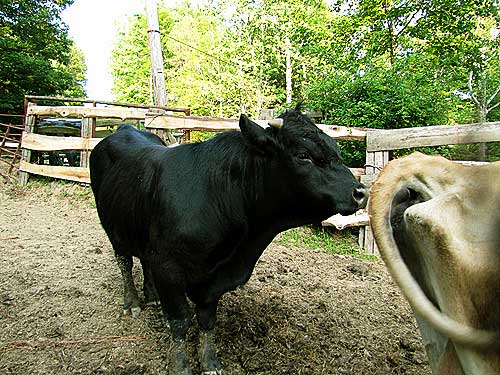 I was a bit freaked out. “BUT HOW AM I GOING TO MILK?” Like I was going to go into the paddock with THAT. 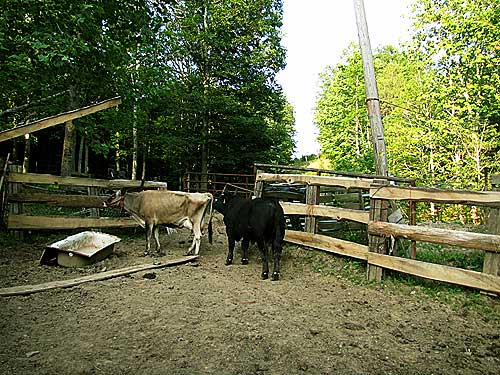 THAT seemed a little concerned we were going to take his Eve away and went to work. 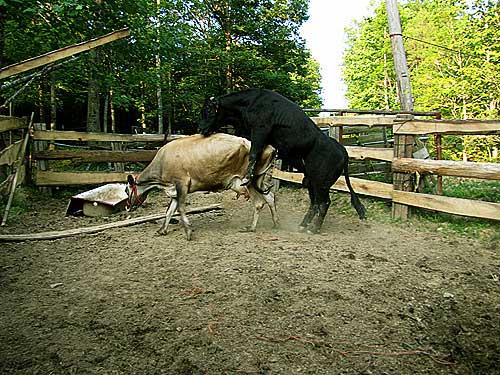 Which freaked me out even more and I totally HAD TO WATCH. 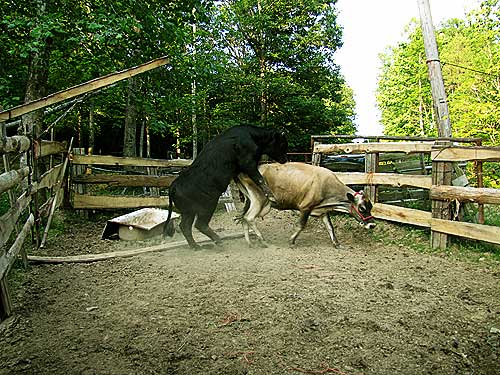 And go home and enlarge the photos so I could see if he was getting in there. He was. I know, how much more weird can I get??? 52 (bravely!) went in there and ran the bull out of the paddock and shut the gate.

The bull waited up on the hill. 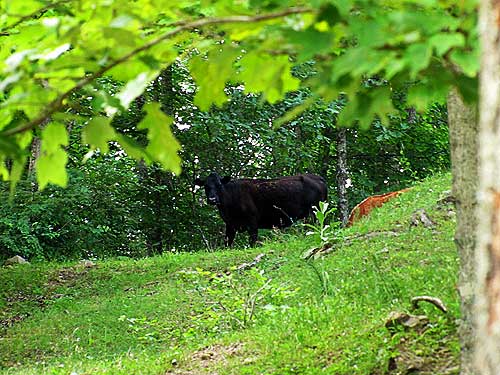 He had a few other girls for company up there. I figure those were the other girls in heat. His entourage du jour. 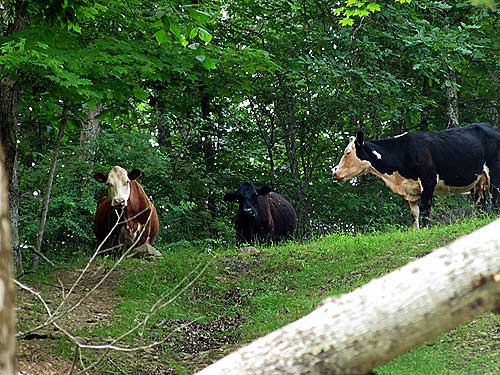 We brought BP over to Skip’s farm on Thursday evening, after she started bellowing Thursday morning. The bull was seen checking her out that evening but the bull didn’t try to mount her. By Tuesday evening, they were keeping company and nuzzling, the bull was mounting her (several times), and BP was accepting of him. If I’d been keeping track of BP’s heat cycles previously (as I should have done) perhaps I’d know if bellowing a few days in advance of the full onset of heat was her normal behavior. In any case, I’m glad we took her over there on Thursday as it gave her time to settle down in her new location before she was in standing heat.

I’m assuming that is standing heat. She was standing there for him. 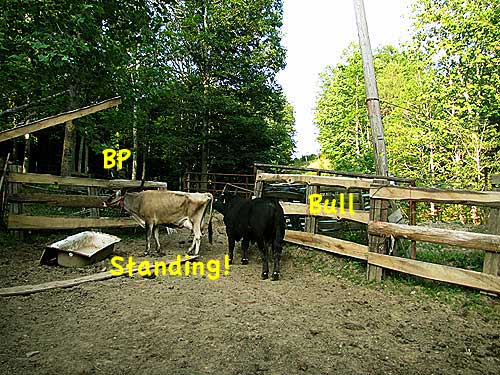 But LIKE I KNOW. When I went over there last night, she came……ALONE. No bull. No entourage. 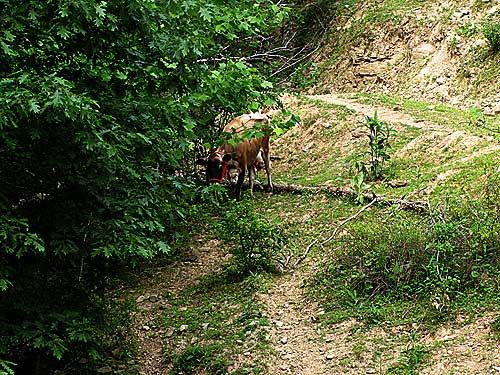 Calling on the experienced cow people here…. What does it all mean???? Can I go ahead and take her home this weekend? The only reason I was going to leave her there for the next three weeks was because I didn’t feel as if I knew when she was in heat and I wanted to be sure I hit the right time, simply by leaving her there long enough. But if that was her standing heat, then there’s no reason to keep leaving her there. I could just bring her home, count 21 days, and see if she goes into heat again. (I assume if she doesn’t go into heat again, she’s pregnant?) Or do I leave her there to be on the safe side? Main issue with going over there–milking. And I miss her. But I want her bred, preferably in the now timeframe. 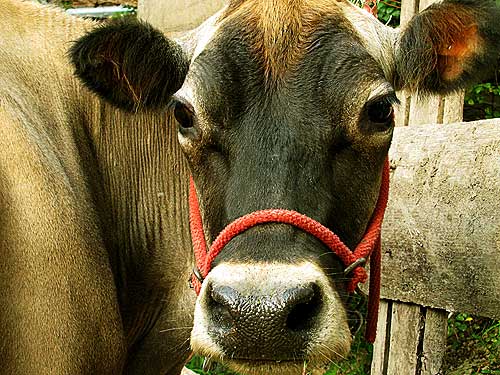 So torn! And indecisive! And discombobulated! And possibly BLINDED by the above graphic activity! 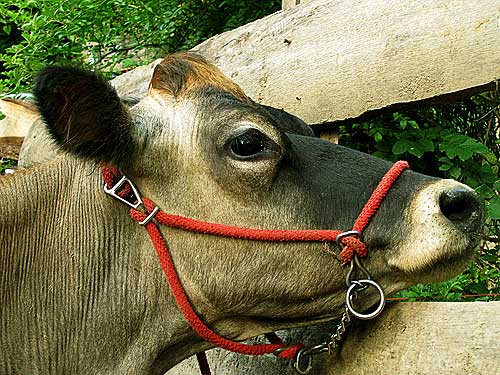 Advice would be appreciated! BP and I don’t know what to do!