Nutmeg, Fanta, and Sprite have all been due to deliver any time now, so yesterday afternoon when I thought I heard a tiny cry from the direction of the goat house, I walked out enough to take a better look, see if I could find my mamas. Yep, there they were, all happily munching hay. I didn’t hear anything else, so I figured I’d imagined it.

Then the next time I was outside, I heard it again, louder.

I was getting ready to go out there anyway to shut up the calf for the night to milk Glory Bee in the morning, so I decided to give the goat house a look-see just in case.

And what do you know but Chloe had a baby! Coco was busy cleaning up the afterbirth. 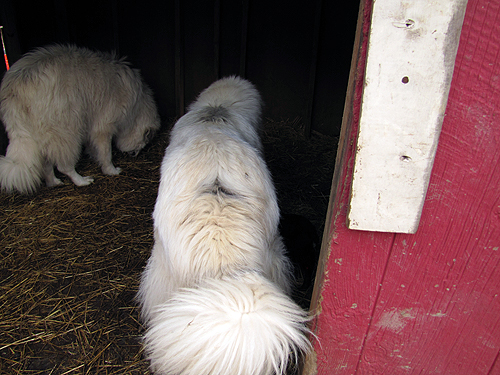 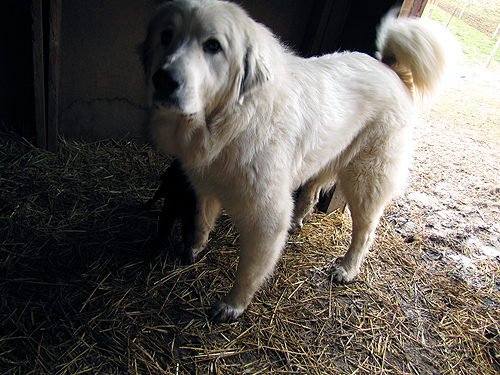 Which was avidly attempting to nurse on her. 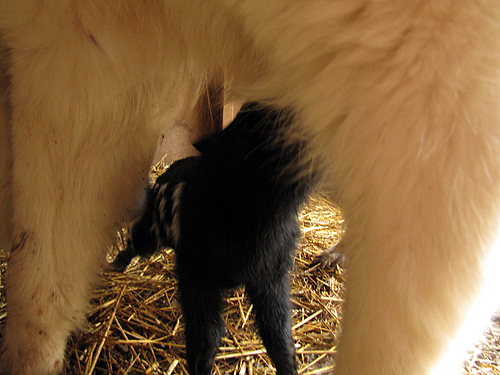 The baby showed evidence of not having been cleaned up, other than by Chloe, and I went looking for mama. I checked Nutmeg and Fanta just to be sure, but I knew who it was…. And yes, indeedy, it was Sprite, who was already headed for a bar to party on the town. This mothering thing isn’t for her.

If you’ve been around here for awhile, you might remember that Sprite has done this before.

Eventually, I convinced Sprite to be a mother. Fanta had had babies the same night as Sprite, and I was able to push the baby on Fanta at first, enough to get some colostrum the first night, then afterward, I held down Sprite for over a week to let the baby nurse and she finally accepted the baby.

So I had to make a decision–was I forcing Sprite into corners and holding her down or was I taking this baby to the house? Inside the house, I had another problem looming. The lamb wasn’t doing well. It had taken every feeding just fine until early afternoon. By late afternoon, it was refusing to eat and acting lethargic. I brought the goat baby inside, hoping a playmate would encourage the lamb. The baby is a girl. 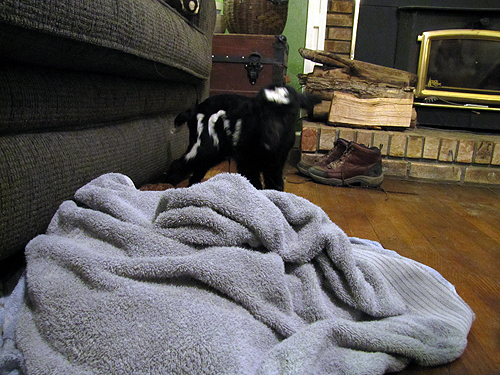 I was getting ready to go out to get some colostrum for the goat when I started getting even more worried about the lamb. Lambs are born looking for a way to die.

A true saying, I tell ya. I’ve had a lot of experience with it. And why? Who knows. Lambs can be touchy creatures, often not very strong, and often there’s nothing you can do and it’s no one’s fault.

I called Woolweaver Farms. Lisa, Morgan’s teacher, was home from school by then. I packed the lamb in the car and met her halfway between our farms and she administered a vitamin drench and another supplement to help boost the lamb’s energy. When I got back home with the lamb, Morgan was here: 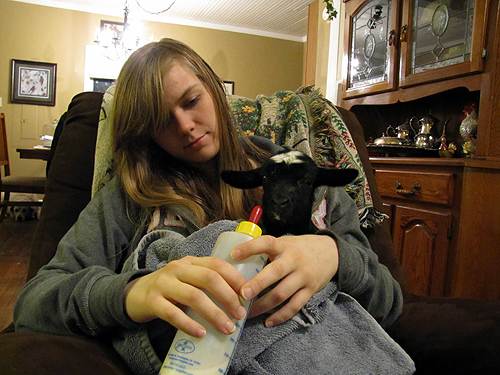 “I FED A GOAT BABY!” She sounded annoyed and yet…. 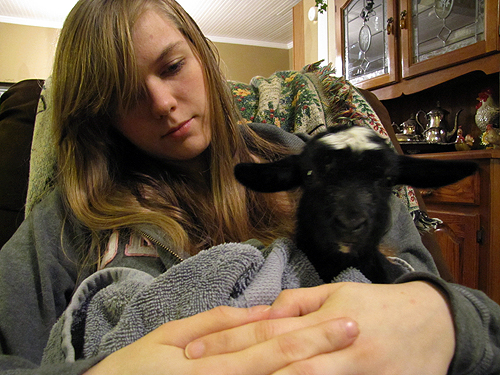 “We’re keeping her,” she said. “I think she’s magical and she needs a magical name. Her name is Maia.”

Morgan has never attached herself like that to a goat before.

I said, “She’s a Fainter. I give them soda pop names.”

And the end of the sad part of this story is that the lamb refused to take any more milk last night. I took him to my room, along with the goat baby, which I put in a box, taking the lamb into my bed with me, towels down on the bed and wrapped around him. He brought up the medicine he’d been given, along with the little bit of milk he’d taken in the afternoon, and I rubbed on him and petted him until he died around 10 last night.

And I got up this morning and fed Maia, who is chasing Gwennie into corners trying to suckle from her, and that is life on a farm. The good, the bad, the heartbreaking.