Mobile veterinarian Dr. Clara Mason and her technician pulled up to Sassafras Farm yesterday afternoon to check out Glory Bee. 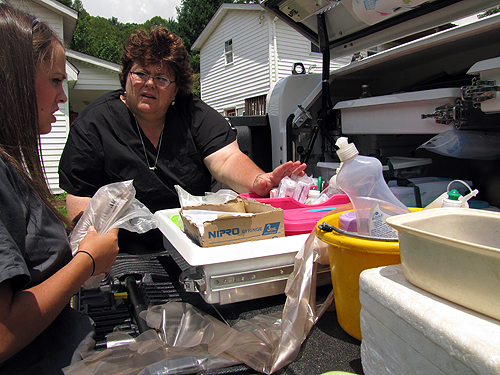 They’re getting out the long gloves. They’re going in! I got Glory Bee in her milkstand with her headlock. Not that she cared. Once she’s digging in to her big feed, she really doesn’t give a hoot what’s going on back there. 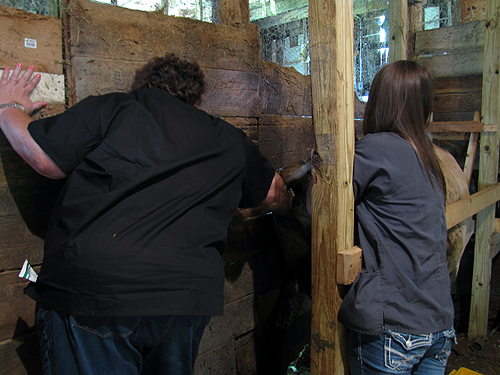 Which is probably a good thing since there were people in her privates. 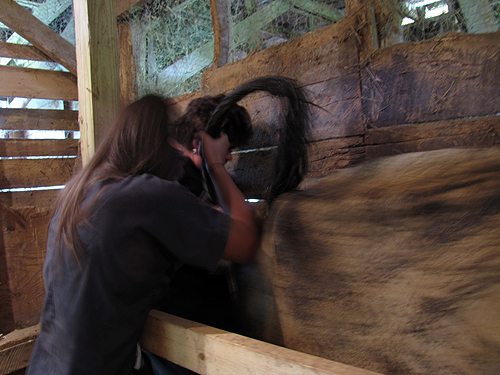 The main point yesterday was to make sure she wasn’t currently already in heat. And she’s not! She’s somewhere else in her cycle, but just exactly where can’t be so easily determined. So Dr. Mason made a plan with a head-spinning number of options depending on what happens next. Because Nature isn’t easily wrangled. But if all goes according to human plans, this is what will happen.

Step 1: I’ll give Glory Bee a shot of lutalyse, which Dr. Mason left with me. I’m to give the shot on Sunday morning, to time her heat so that we will have next week, on business days, to deal with the insemination. (Trying to avoid the weekend.)

She must have noted the freaked out look in my eyes.

Her technician said, “I was giving shots like this when I was 10.”

Dr. Mason is a good teacher, and she spent several minutes showing me exactly where and how to give the shot to Glory Bee, in the muscles in her neck.

Step 2: Watch for signs of heat.

Step 2 is also Step 1a, by the way. I’m supposed to start watching for signs of heat now, in case Glory Bee goes into heat before the shot on Sunday.

To watch for heat, she told me to separate Glory Bee and Dumplin. (Glory Bee can be with her calf, but not Dumplin.) Dumplin has a special job. Since she’s a full-grown heifer at this point, she can be used as the heat tester. Both male and female cows will react to a cow in heat by attempting to ride up on them. Every morning and every evening, I’m to put Glory Bee and Dumplin together and watch them for 30 minutes to see if Dumplin tries to ride up on Glory Bee. Then separate them again. Heat can also be detected by watching for a swollen vulva and other physical signs, but the “riding up” is the most obvious and impossible to miss.

With the shot on Sunday morning, which incites heat, Glory Bee should go into heat by Monday evening or Tuesday morning. In that event, then the semen will be ordered to be delivered on Wednesday and Dr. Mason will make a return call for–

Meanwhile, Dumplin has a job! 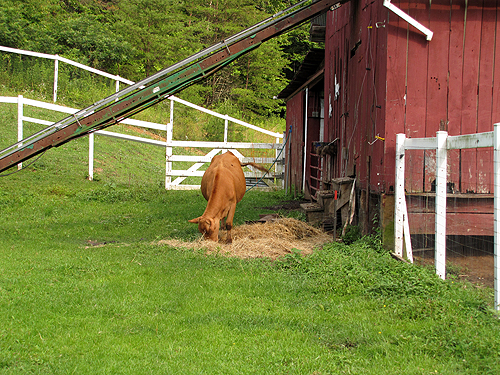 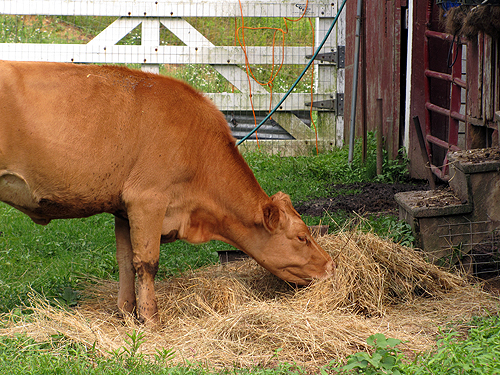 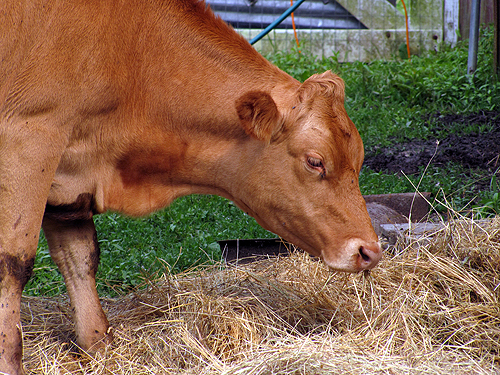 P.S. I’ve had a lot of questions about Dumplin. She belongs to my neighbor, but she still lives here. All the cows are happy with this situation. She’ll be bred later this summer with a bull from up the road. I’m going to have Glory Bee artificially inseminated because I want a calf earlier than will work out with when I can get that bull, plus I’d like to choose the breed, have her inseminated with Black Angus. I’ve never had AI done before, and if all goes well, I’ll probably do this in the future and stop having bulls over. Next year, Moon Pie will be ready, so I’ll have two to be bred!