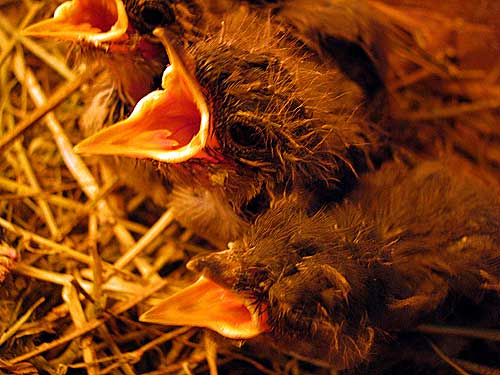 Saturday afternoon, Morgan strolled down to the river with a friend. An hour later, they came back with four wild baby birds. Then Morgan said, “Good luck with that!” and she went to camp for a week. 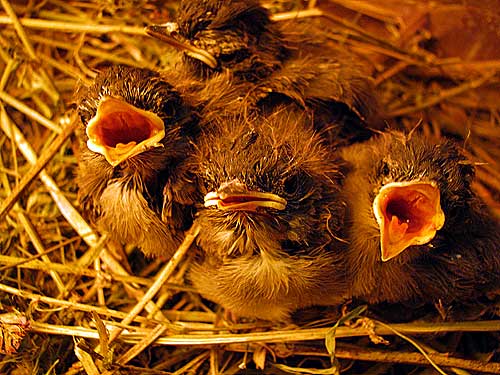 Okay, she didn’t leave for camp till the next morning, but the rest of it is true. 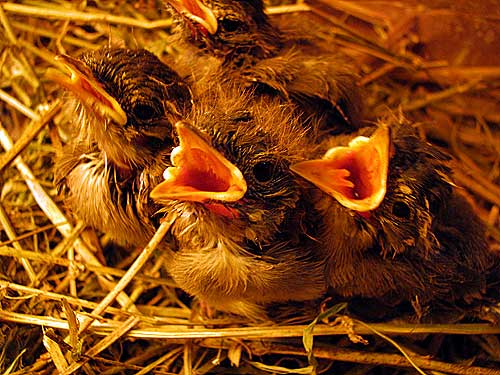 She found a destroyed nest on the bank of the river, with the four babies scattered nearby. If I’d been there, I wouldn’t have let her pick them up, but I wasn’t there. By the time she brought them back to the house, I wasn’t sure what the right thing was to do since she’d already handled them and removed them from the nest’s location. Probably, having had a few days since then to read up on baby birds, the right thing to do would have been to have her take the babies right back to the riverbank and put them right back where she found them, on the chance the mother bird would have come back to rescue them. 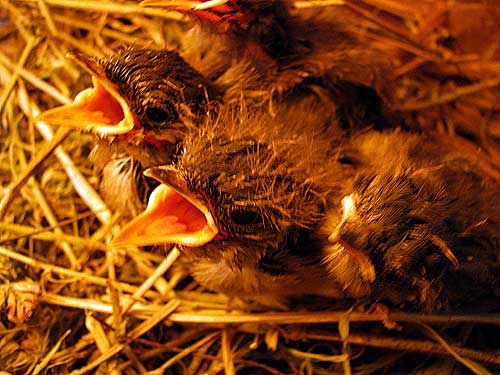 By the time I’d read enough to think that was probably the right thing to do, it was way past the window of time in which that could have been done. 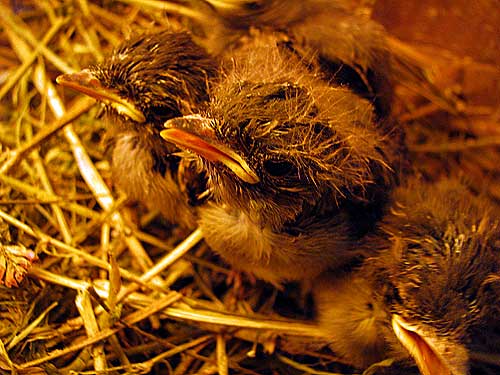 I started calling wildlife rehabbers I found listed on the internet. It was a holiday weekend, though, and I couldn’t find anyone so I had to figure out how to keep the babies alive. And just where was Morgan? I fed them a mushy mixture I made by dissolving chick feed in warm water, delivering it to them with a small syringe.

All four ate eagerly and seemed strong and healthy. (You see me feed three in the video clip, but don’t worry, the fourth one got fed, too. That clip only shows part of one feeding. Each baby was taking two syringefuls per feeding, and I fed them as often as possible.)

Keeping wild baby birds, sweet as they are, isn’t on my agenda. They need to be fed constantly. Besides, it’s illegal to possess wild animals, not to mention that I don’t know what I’m doing. I pretty much treated them like baby chicks (except you don’t have to mush up the feed for chicks and give it to them in a syringe). I kept the birds in a room shut away from the cats, warm and fed frequently, in a cardboard box, nested in alfalfa, and continued trying to dig up a wildlife rehabber. 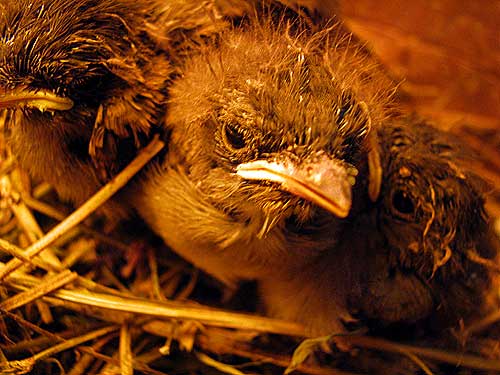 By Monday morning, I was talking to Ron at Three Rivers Avian Center, located a couple of hours south of Charleston. Ron is a wildlife rehabilitation specialist and he was just what my sweet little baby birds needed.

I took the baby birds out to my Jeep in the box I’d been keeping them in. They had an hour-long drive to the big city. 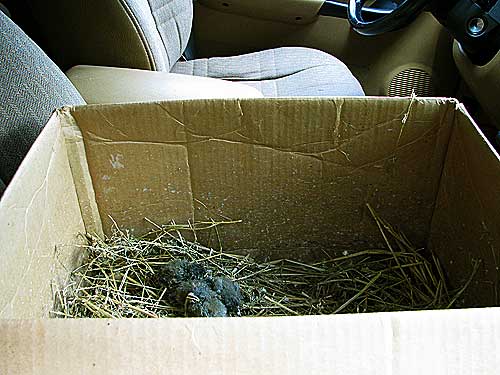 I met Ron and his partner at a Go-Mart in Charleston and handed over my charges, alive and strong, but slightly mixed up as I had almost convinced them that they were chickens. 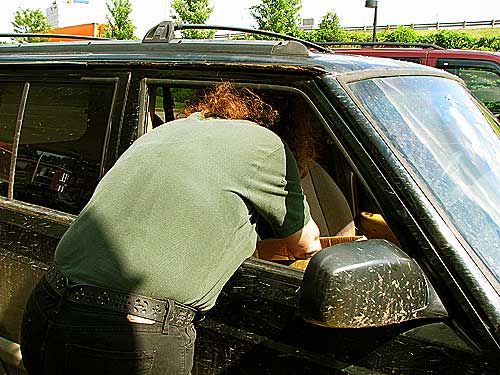 They put the babies into a bird carrier box. 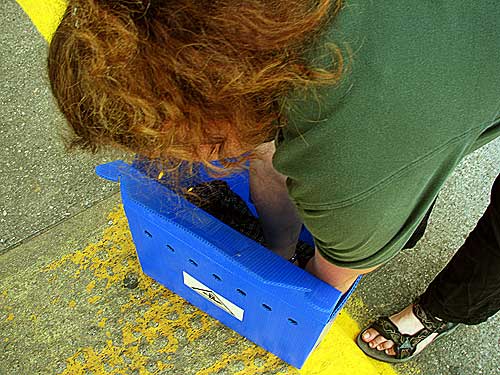 Ron told me these are two-week old sparrows. 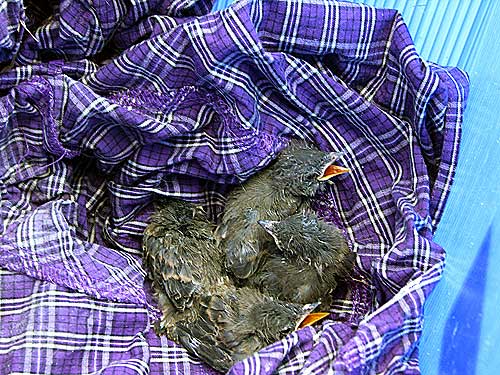 Thank goodness for places–and people–like Three Rivers Avian Center. I felt absolutely confident and yet absurdly possessive at the same as I watched them take my babies into their much more competent care. 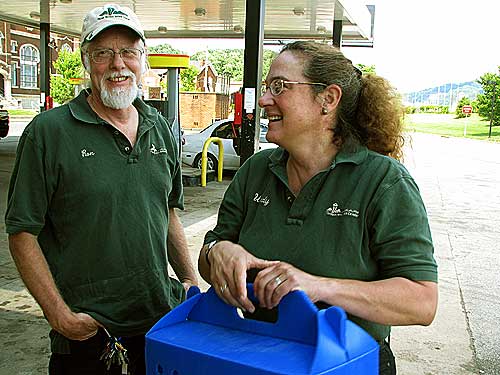 I’m sure I did almost everything wrong, but I did keep them alive–in my care for just under 48 hours–until I could get them to proper, expert management. (By the way, according to Ron, the best thing to feed baby birds is wax worms and mealworms.) Our baby sparrows are now in the best of hands–specifically, NOT MINE. 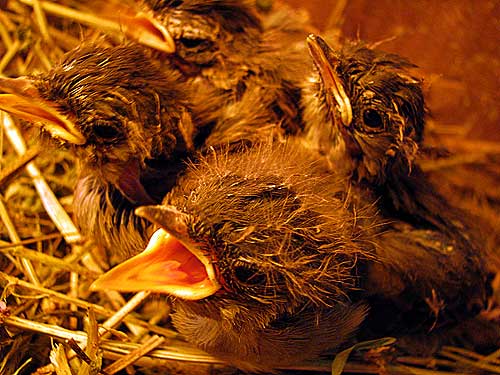 Now I can’t wait till Morgan gets home from camp so I can beat her.

Update from Three Rivers Avian Center: Two of the babies died. (sob) But, the other two are thriving, and not only are they thriving, they have been adopted by a new mama! After getting a better look at the babies, Ron determined that they were actually Eastern Phoebes. Upon discovering an Eastern Phoebe nearby, he placed the two remaining babies outside where the mother could hear them chirping. She flew down and got excited, so he placed them in a basket and hung it in the tree. The mother is now feeding the babies! They are back where they belong, in the wild, being cared for by a mother bird. Fabulous!