Yesterday evening, I was getting ready to start grilling out hamburgers and hot dogs for the kids when I heard some godawful hollering from the goat yard. 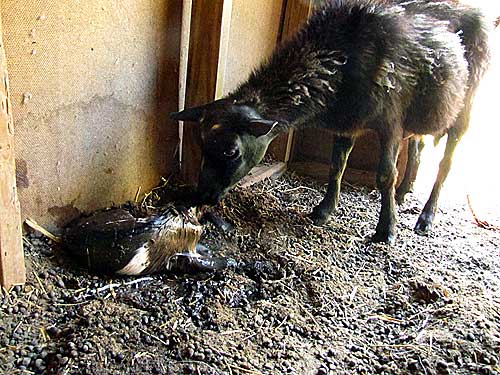 Nobody complains more loudly about having a baby than 1) a human or 2) a goat.

It’s five months to the week since I moved to Sassafras Farm. Fanta had to have gotten pregnant within a few days of the move. Even as I was settling in here, the first baby was conceived. 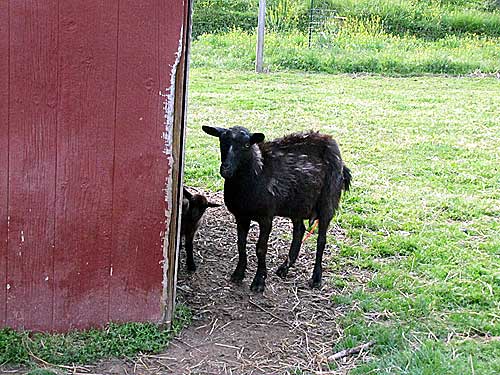 The other day when I was at Stringtown Rising, I couldn’t help but notice how big and healthy the four-year-old peach tree looked there. You know, compared to the peach tree stick I planted here recently. Sometimes this whole starting over thing is really hard. Six months ago, I couldn’t imagine this farm or imagine living anywhere but where I was. The future looked dark, and too long. Today, the future looks bright, and too short. I’m afraid I won’t live long enough to enjoy everything that is before me.

If you keep going through life’s dark tunnels, one day the world will open up. It always does. You just have to keep going.

And sometimes a peach tree stick is better than a four-year-old peach tree.

I had been expecting the goats to have babies long before now. I thought Cookie Doe was bred when I got her, and as for the rest of them, I figured they’d be having babies by February at the latest. Goats can breed any time, but they tend to be active in the fall. (Similar to sheep. They can breed any time, but they most often seem to breed in the fall–even if they’re together all the time.) I was watching the goats carefully for a long time, then finally got to where I was like, they’re NEVER going to have babies, and I stopped paying any attention to their udders or their bellies.

Which means you go out to grill a hamburger one day and there’s a baby goat. It was up and at ’em within an hour. 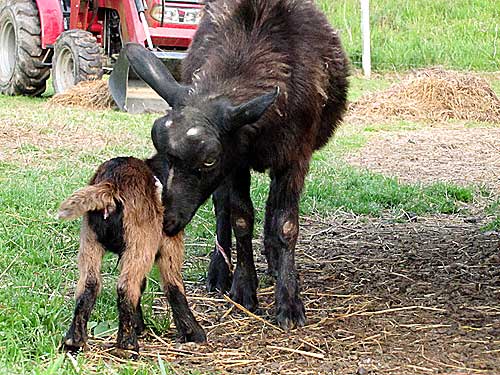 Fanta just had the one. (Really.) It’s common for goats to have one baby their first time out then generally they will have two after that. They can have as many as three or four at a time, though that is less common. Fanta had two last year on her first time, so maybe she was taking a break after over-achieving on her maiden voyage.

Having just been smacked upside the head, I checked out everyone else. Nutmeg, Clover, and Sprite may be pregnant, but if they are, they don’t look due any minute. Cookie Doe is another thing. She’s quite bagged up. I think she’s finally really going to have babies! 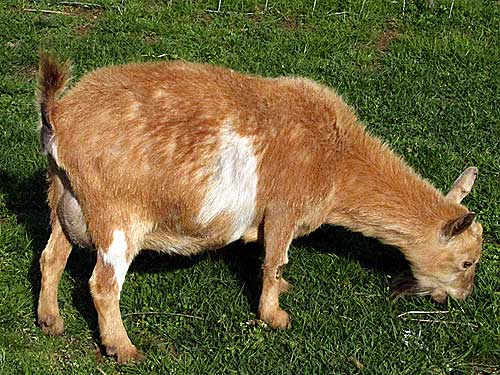 Within days, I’d guess. I’ll be keeping a close eye on her now.

Meanwhile, I ran the rest of the goats into the front barn yard, leaving Fanta and baby alone in the goat yard for now. (And got Chloe out of there. She was trying to help Fanta by cleaning up the afterbirth. Ick. And Fanta wasn’t really appreciating the assistance.)

The baby looks like quite the little Mr. Pibb clone with the dark brown coat, white belly bands, black socks, and black stripe down the back. This one is a purebred Fainter. I picked her up and took a look-see. I believe it’s a girl, but don’t quote me on that. I’m not known for my sexing ability immediately after birth. 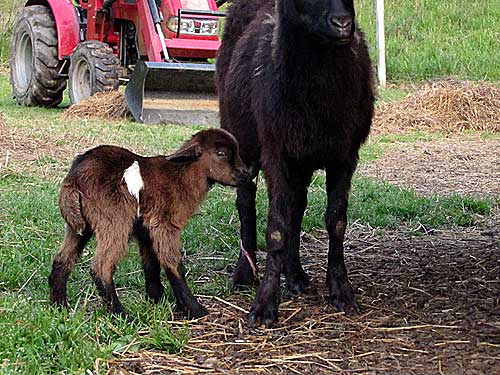 There is something very satisfying about the first baby born here. Just another layer of my stamp on this farm. We. Are. Here. It’s solidifying. Whether it’s planting a tree, putting up white pickets, or creating a business in the studio, it’s all about moving forward. Life goes on. 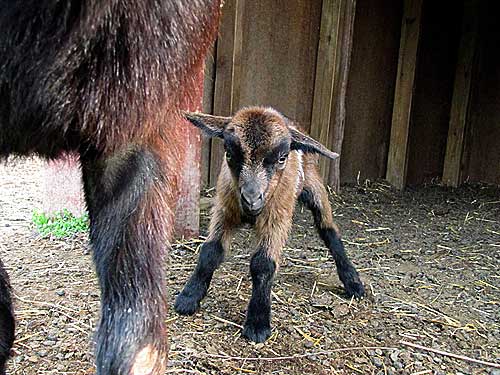 New trees reach for the skies, and new babies fall out of their mamas. 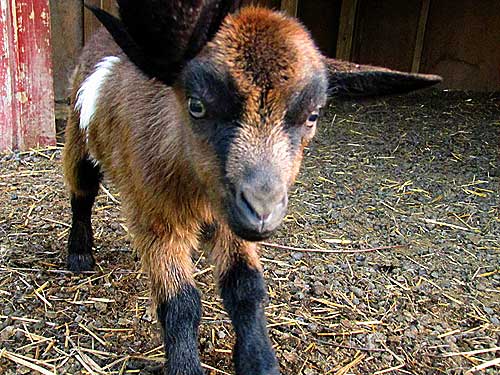