It’s 13 degrees here at the moment. The next few nights are forecast for sub-zero. Snow is expected to start again sometime this morning. I was out doing chores early, before the flakes start falling.

Food to the dogs and cats. Feed and hay to the goats. A big bucket of grain to the cows. I moved the cows all the way into the back barnyard to give them access to more hay. I can’t move round bales right now, so I need to get everybody where they can get what I can move for the next few days–square bales. Their big grain feeder is frozen into the ground in another field, so I had to feed their grain in a small-ish (for big cow heads) feeder.

They managed to get all three of their giant heads in there at the same time. Motivation can create miracles.

Everybody has access to creek water, which has helped me a lot this winter. Well, not the chickens, since I have them in their house. I bring them fresh water every day and tell them to drink up before it freezes on them! They mostly pay attention. Or at least they’re still alive, so nobody’s died from lack of non-frozen water yet.

And at times like this, survival is pretty much the goal. Nothing’s perfect when everything’s going wrong and frozen. Just keep everybody alive until it thaws.

Zip is easy to lead. I just put a dog leash around her neck and tell her to c’mon. Shortcake follows right behind her. The morning sun was pushing at the thick gray clouds in the sky portending the upcoming snow. The road was partially cleared, in the middle, and the horses clip-clopped over the pavement. The sound of their rhythmic clip-clops was such a steady, soothing sound, I wanted to keep walking, never stop.

But I had the leash in one hand and a big bucket of grain in the other, and Zip and Shortcake were eager to spread their napkins in their laps and get to dining, so I took them in the field and let them have at it. 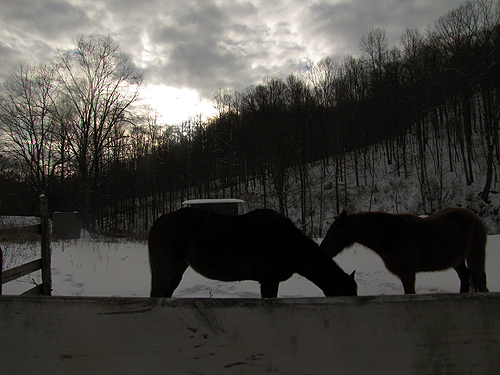