Hay. Not straw. Hay. Yes, I have had some trouble with the difference between straw and hay in the past. WHAT?! They aren’t the same?! Yes, I am such a country girl. I totally know the difference now. Except, not really. What IS straw? No idea. But you don’t feed straw to animals. Straw is bedding. Hay is food. Used to, in my olden suburban days, I would get a bale of hay, straw, whatever to set out in front of the house to decorate for fall. Put pumpkins and scarecrows on top of it. Have no idea whether it was straw or hay. It looked pretty. WHATEVER.

You don’t even want to see me trying to get into a bale of hay. Or straw, for that matter. I usually start with an ax, hacking at the bale. Because I forget to bring a knife or scissors with me to cut the twine that holds the bale so tightly together it’s like it’s glued. After I hack at it for a few days running, I remember to bring something to cut the twine with me the next time I go out.

No, really, I’m this stupid. It comes naturally.

Luckily, there is rarely anyone around to watch me hacking at a bale of hay, straw, or whatever with an ax because I do most of the animal tending around here. Princess helps, sometimes, but the boys? They barely give the goats the time of day. They have so many teenagerish things to do! Which is just as well because I don’t need anybody making fun of me. I have enough trouble with goats staring at me while I’m hacking at their whatever. I’m sure they know better and they wonder why I’m such a dimwit and if they will possibly survive under my caretaking.

However, there’s nothing like some fresh hay to take their minds off the matter. 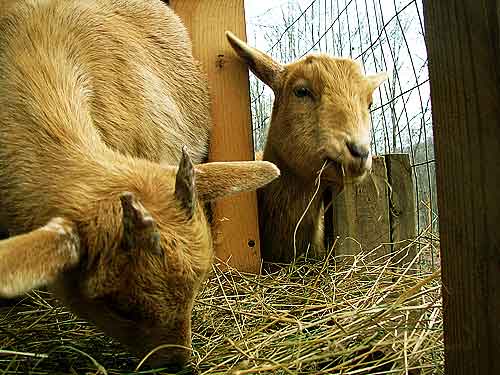 With snow on the ground and little growing, they are eager for their hay. They bury their faces in their food tray. And let hay hang out of their mouths like they’re toddlers plowing into a spaghetti dinner. I restuffed the manger full of hay yesterday. They were soooo excited. And then I saw something I hadn’t noticed before. Look at that! NUTMEG!!!!!

She is not watching her girlish figure. 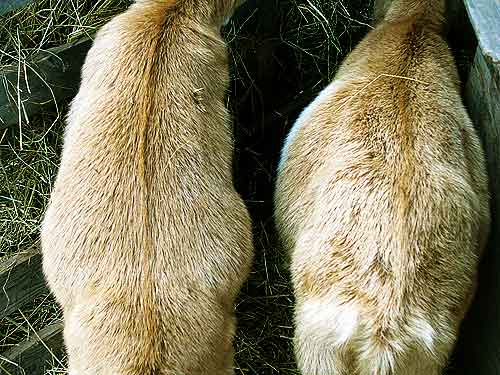 That’s Nutmeg on the left here, Clover on the right. Nutmeg is still, stature-wise, quite a bit smaller than Clover and yet– “Okay, okay, I know. You’re busy. Munching. SOME KIND OF EXAMPLE YOU ARE.” They make so much noise when they are munching hay. Which seems a little odd. It doesn’t look that crunchy….

It is kinda moving, though….. 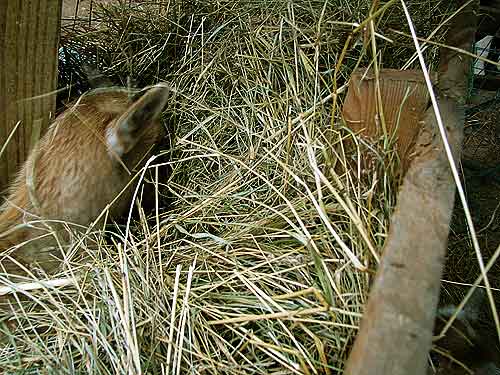 He does this. Abruptly. Without notice. He’s sneaky. Suddenly the hay will be moving and it’s Honey. In the middle of the manger. Like he just jumped into his giant bowl of spaghetti. What toddler wouldn’t want to do that? 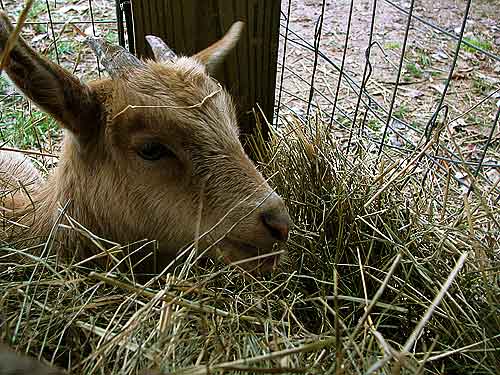 Then he sneaks back out. Possibly ashamed of his greediness. Or not. Probably not. Animals are so basic. Everything’s right there on the surface, for all to see. They shout to the world, I LOVE HAY. They’d have a bumper sticker if they could drive. It’s their favorite thing. At least today. Tomorrow it might be another molasses cookie, but on a snow day, the grass covered and unfit to eat, it was hay. And, you know, my shirt.

No matter how much hay they eat, they can always fit in a bite of my shirt………..