Morgan had a friend (note, I refuse to use the word boyfriend even though she does) over on Sunday, which happened to coincide with the determination to move some animals around on the farm. Jack and Poky have been enjoying Lovers Meadow in the bottom pasture for the past few months, interrupted only by Beulah Petunia (who pays no attention to them as donkeys are beneath her, literally). Since we moved the sheep over to their new pasture, the three regular fields have grown up some with just Jack, Poky, and BP on them, but they could still use a bit more rest from larger animals. 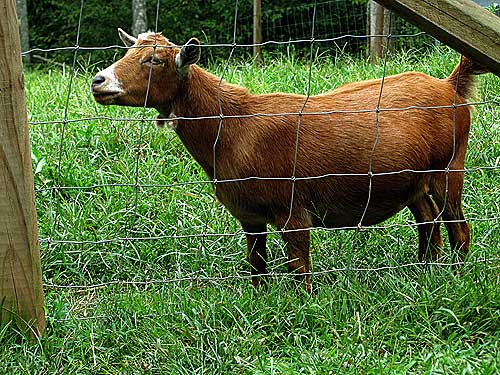 Meanwhile, in a contrary situation, up in the goat yard, our little goats can’t keep up with their yard. I’ve been starting to think we need to MOW it! Which is ridiculous. You don’t mow your free food. To start the round of moving, we took da boys (Eclipse and Rhett) out of the pen by the goat yard. I told Morgan’s friend, “You take the big one with the horns.” 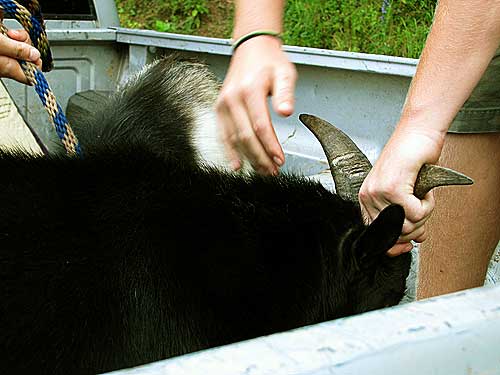 No matter what type of farming circumstance you may find yourself involved in, “You take the big one with the horns,” is always the right thing to say to whoever is next to you.

Actually, Eclipse isn’t that big, but he’s bigger than Rhett. Rhett’s like a little dog. I handed Rhett off to Morgan and put her friend in charge of Eclipse and everybody loaded up in the truck to make the short ride down to the meadow bottom. 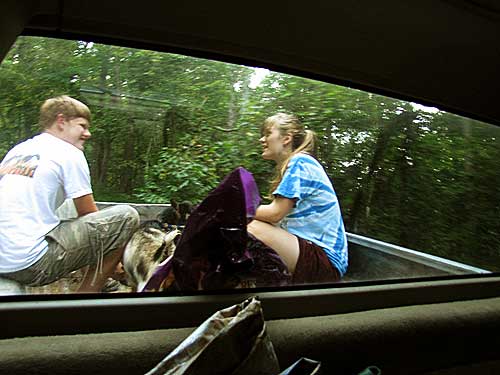 Mr. Pibb, for now, is staying up in the goat yard. (He’s having too much fun to leave.) 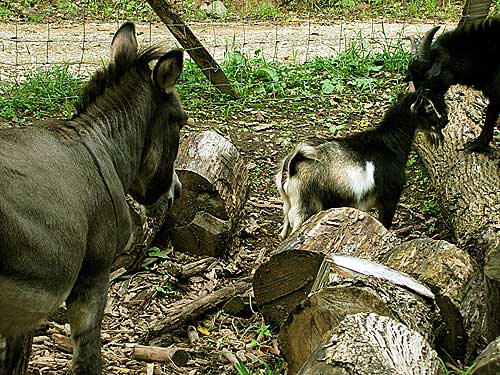 Once we had Eclipse and Rhett installed in their new quarters, it was time to take Jack and Poky up to the goat yard to do some chomping before it turns into a forest. Donkeys don’t really like to do anything on command. We got a halter on Jack pretty quick and Morgan took control of him while Poky ran like the wind around the meadow. 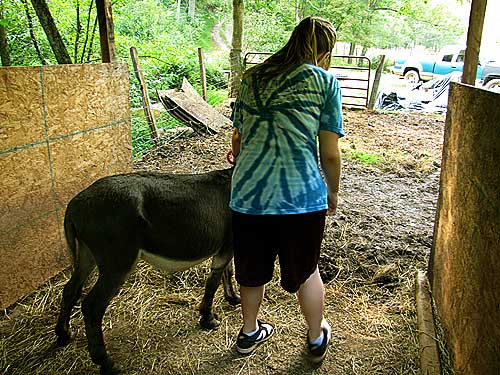 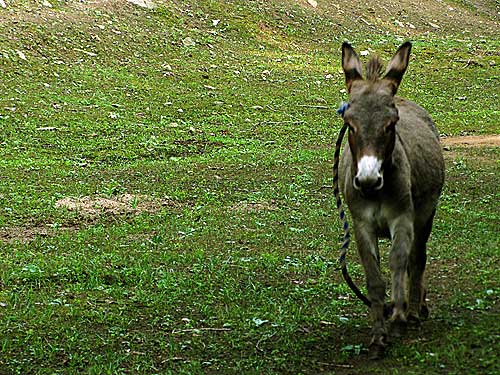 We spent about 10 minutes getting a rope on her and getting her under control. 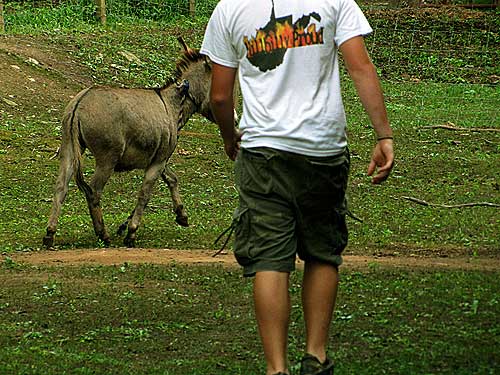 Jack was upset about leaving his beloved behind, but Morgan walked him right up while “the boy” and I pushed, pulled, and begged Poky to move. 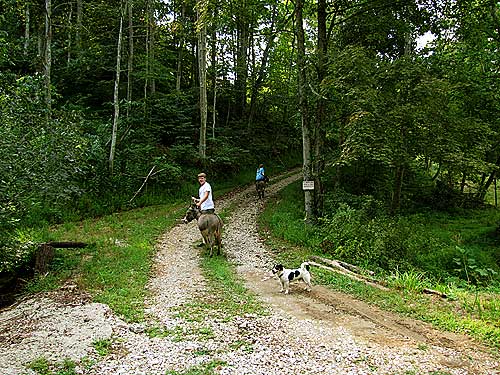 We got her about a quarter of the way up the driveway when she dug her hooves in and refused to budge another inch. 52 was still in the pasture making sure everything was tight along the fenceline so Eclipse and Rhett couldn’t escape, so we were on our own. Morgan had already disappeared up the driveway with Jack.

With Jack safely put away in the goat yard, down came Morgan, wanting to know what our problem was, didn’t we know anything, was she the only one who knew how to handle horses, in a very do I have to do everything tone. She took Poky’s rope, clicked her tongue a few times, and off Poky went with her. 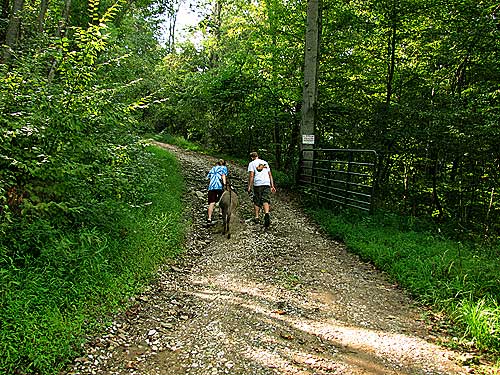 Which explains why she will never be able allowed to leave home. She’s the donkey whisperer.

Jack was in the midst of a desperate panic attack by then. 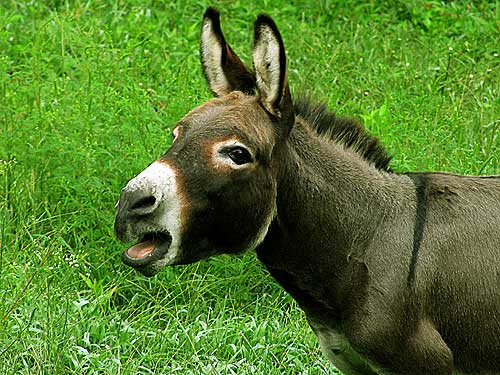 WHERE WAS HIS BELOVED?! She was gone! Life was not worth living! 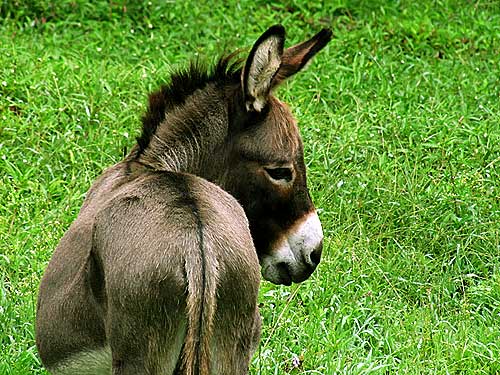 Then Morgan put Poky in the goat yard. Jack chased her all over the yard, clambering on top of her and telling everybody this was HIS DONKEY and they better not be separated ever again. Not even for five minutes. Because that was the longest five minutes of his life. 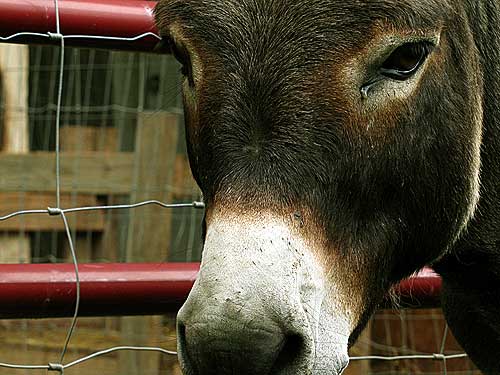 Then Clover and the kids moved from the goat house to the goat pen, which is roomier and more interesting for them since they can see out. 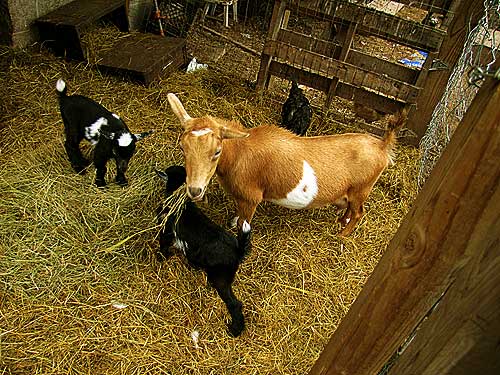 Clover got excited right away to see her old friends and started doing her dancing on two feet routine. 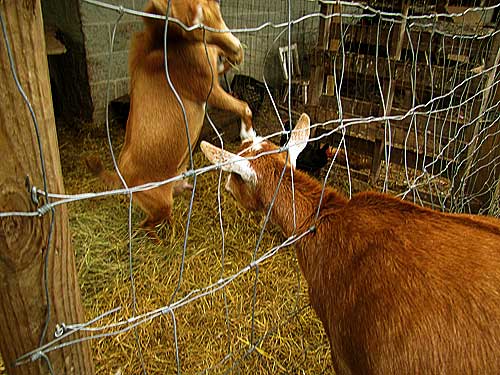 And Mr. Pibb got excited to see another woman. 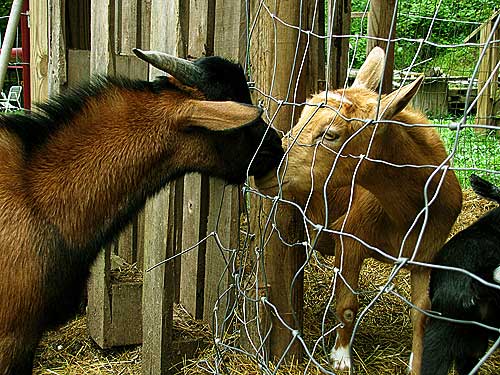 Then I was concerned that the babies might slip out the fence on the side where Eclipse and Rhett had stretched the fence in their attempts to reach the girls, so I put together some barricades with logs to prop up some boards until 52 could come put some new fence wire on there. This is what it always looks like when you try to work in the company of goats–they are always in the middle of whatever you’re trying to do: 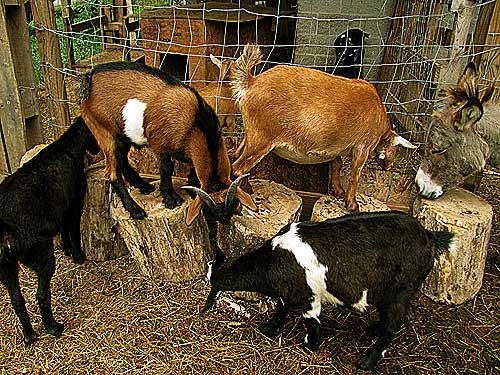 And then I decided that was enough farming for one day!