Every morning starts with heading to the barn to throw down some hay for the sheep and goats. Annabelle’s always right on me. 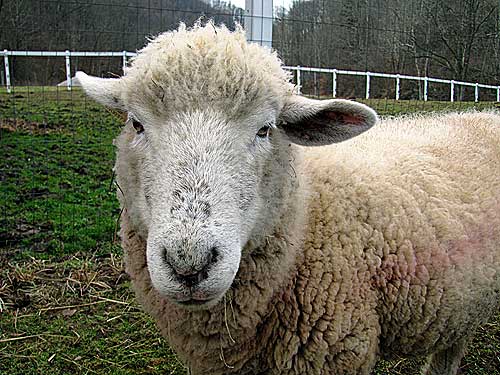 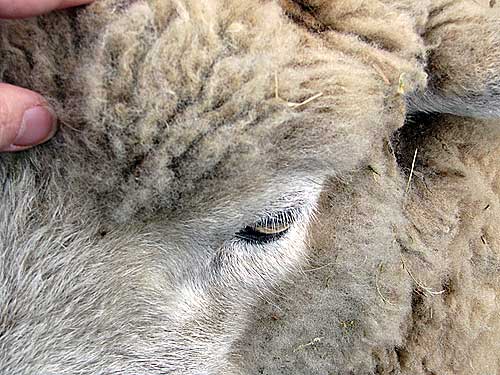 She wants some lovin’. 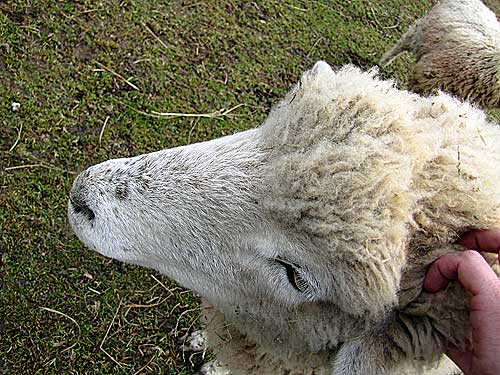 And a good scratch. MinnieBelle isn’t quite as friendly, but she’s not unfriendly, either. Mama likes me, and babies take their cues accordingly. 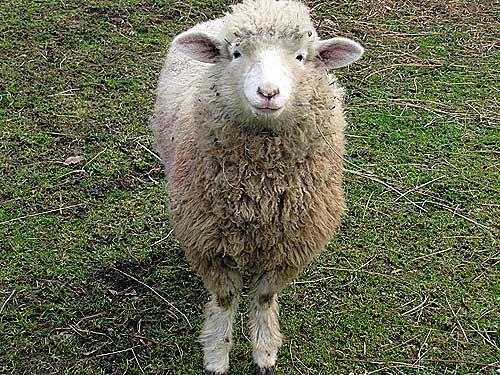 She’s got her mama’s face, but she’s a Cotswold through and through in her body type and coat. 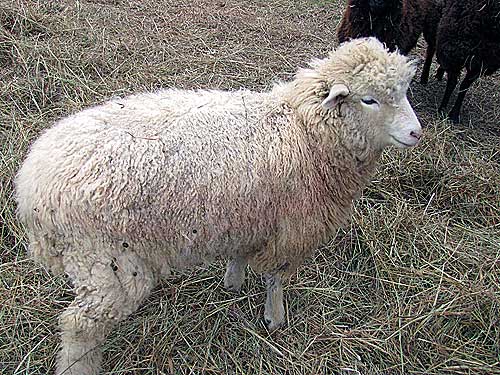 Mr. Cotswold was always in fine form with his skill at passing his long, curly coat onto every lamb he fathered at Stringtown Rising. We never got a pure Cotswold as neither of the Cotswold ewes we had ever lambed, but with all the crosses he produced with the Jacob ewes, they all had their mama’s coloring in the dark wool, but the wool itself came out long and curly. 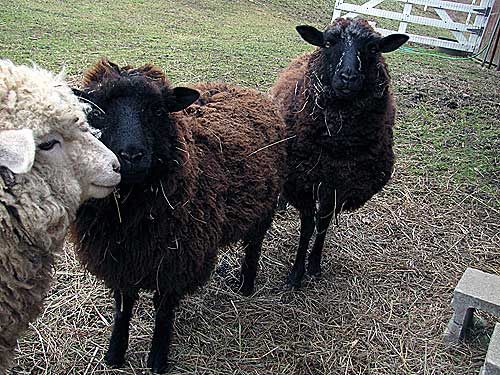 Miss Crazy, on the right, is a 50/50 Cotswold-Jacob cross. She was one of Jester’s babes. She was the lamb that was constantly in the road at Stringtown Rising. She hasn’t escaped here once, so I’ve just about decided to keep her!

Junior there on the left is her ram lamb. Notice he looks just like her. The Jacob ewes all produced lambs with Mr. Cotswold’s curly coat, their coloring, and also their body type. Crazy was bred back to Mr. Cotswold, but that didn’t change the dynamic. Still no Cotswold heft–just the curly coat along with the dark coloring and the lighter Jacob body type.

I’m keeping Junior around long enough for a breeding, just because he’s handy at the moment, then he’ll have to go. Crazy’s offspring from him will be a sort of convoluted second/third-generation breed-back and I’m not going any further, plus his body type just isn’t what I’m going for. I’ve had people inquiring into purchasing lambs, but around these parts, the interest isn’t in the exotic wool. It’s meat. Besides being related too closely to both Crazy, his mother, and MinnieBelle (half sibling), he doesn’t have the body type for my purposes. He isn’t related to Annabelle at all, of course, so I’m hoping she might produce a ram lamb from a breeding with him that will have some heft, but we’ll see. I won’t keep a ram lamb from either MinnieBelle or Crazy next time because of the relation combined with my desire to breed out the Jacob genetics. If I don’t have a ram lamb from Annabelle that fits the bill, I’ll probably go looking for an “outside” suitable ram lamb and bring in something fresh.

I’m not sure about whether or not I’ll keep any ewe lambs, either. I’m not particularly looking to increase my sheep, but it depends on how sales of lambs go and how the pasture works out. I have a lot of pasture here, and plenty of rotational fields planned for the four sheep I have, but sheep eat a lot and I don’t want to devote any more space to them than I already have planned.

Crazy was mama-reared, and like most mama-reared sheep, this means she thinks I’m out to kill her, and so of course Junior thinks I’m out to get him, too. Well, actually, eventually…. NEVER MIND. They watch me curiously as I enter the front barn yard to head for the hayloft and the morning ritual, but they are quick to run when I pass by too closely. 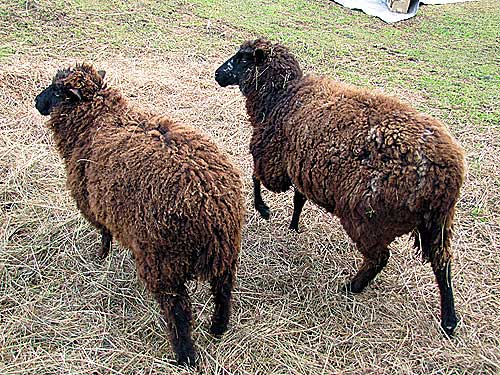 Barn cats run toward me. 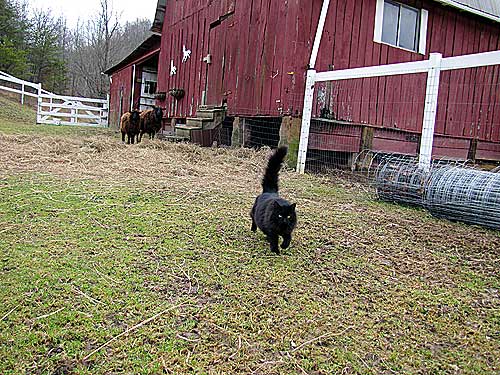 Then back to the barn door. 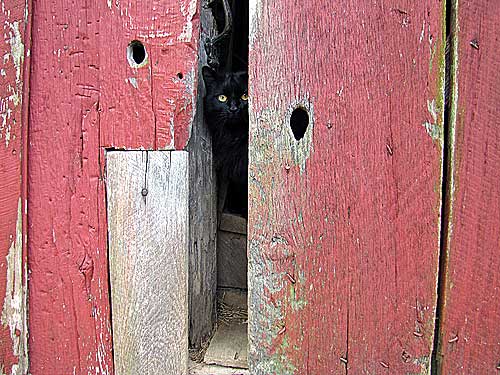 I mean, what if I forget the way? They have to lead. They know that hay time also means that while in the loft, I’m going to dump some cat food in their pan. They don’t keep the mice under control for nothin’, you know.

Once I get to the hayloft (after escaping Annbelle’s clutches–she’d like some cat food, too), I roll a bale over to the loft door. 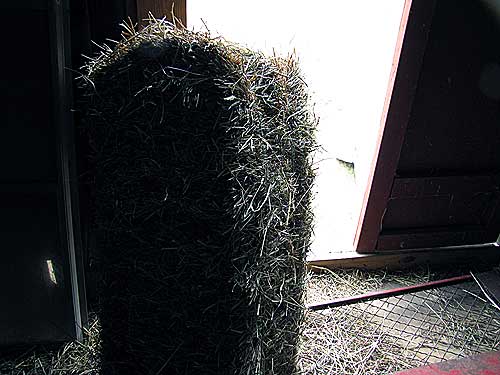 This whole process makes me feel like I’m on vacation. I can’t tell you how difficult it was to get a bale of hay to anyone anywhere at Stringtown Rising. (Though I tried. Sometimes it could be quite ridiculous and exhausting and a total production.) All I have to do here is push down a bale from the towering stacks in the loft, roll it end to end over to the loft opening, and push it out.

Notice the rest of the sheep have positioned themselves at a reasonable distance from the drop point. 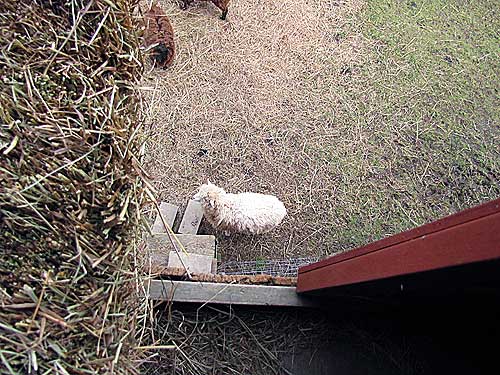 Sheep brain cells are limited. Apparently, between the four of them, MinnieBelle doesn’t get to have any. OR she’s the smartest one! The head of the class! She’s gonna be first! 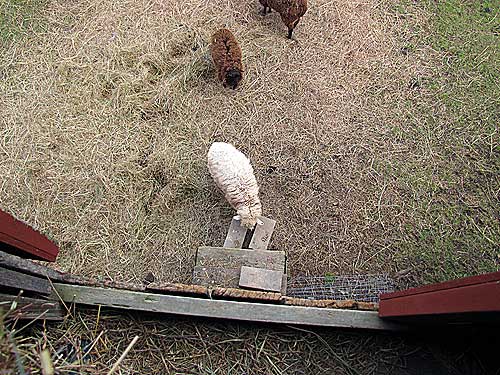 Either way, one of these days, she’s going to get her head taken off by a bale of hay. 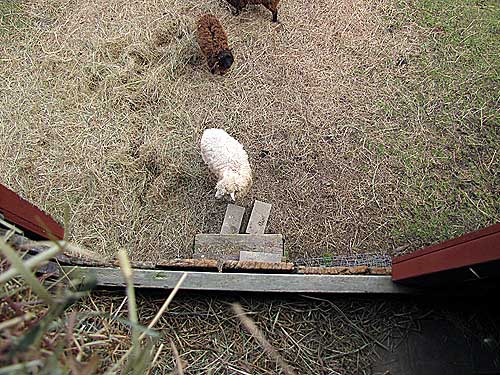 I hang around the loft, petting the cats. Sometimes I hang out the window to the rear barn yard and talk to BP and Glory Bee, or Jack and Poky, whoever is out around there. Then go back to check on MinnieBelle again. And admire the view. I moved here on the brink of winter, and I stand here at the loft door, staring out over the pastures and hills and trees and imagine what it will all look like in the spring. 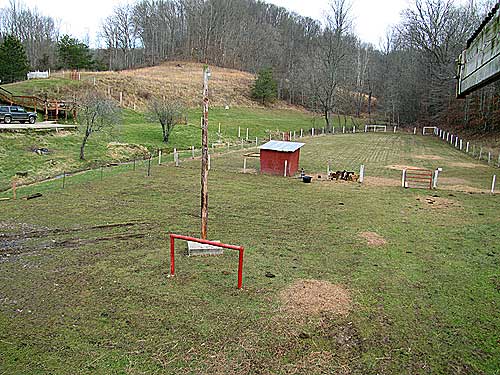 Note that the goats are clumped over there at the fenceline. They’re bawling their heads off, annoyed with their waitress at the breakfast service delay. I yell to them, “YOU NEED TO TALK TO MINNIEBELLE.”

It reminds me of the quiet time you get at a cow’s udder when you’re hand milking in the morning. Nothing to do but what you’re doing, nowhere to go but where you are. Sometimes MinnieBelle eventually forgets I went into the barn at all and wanders off. Other days, she sticks right there and just won’t budge. If I have other things to do, I give up and hone my aim as I push the bale out in a new game in which I attempt to avoid striking the target. 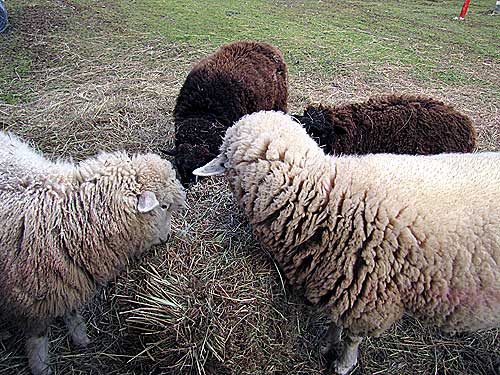 I toss down more hay to load up in my handy little cart and take to the goats, who never believe it was all MinnieBelle’s fault. They never leave me a tip. I’m the worst waitress ever.

I go back to the house with visions of spring pastures still dancing in my head. This is a beautiful farm, and I have so many plans. There are difficulties and worries, and more difficulties and more worries, but every morning I get to go out to the barn, scratch a sheep’s head, admire the view out the front of the loft, lean out the back of the loft to say, “Glory Bee Bee! Glory Bee Bee!” then toss down some hay and walk back to the house with a trail of chickens on my heels like Pig-Pen from Charlie Brown with my own poof of dust (er, feathery bodies) billowing from behind.

A reader emailed me recently asking me if the farm life was really worth all the obstacles and money drains and nights up with worry.