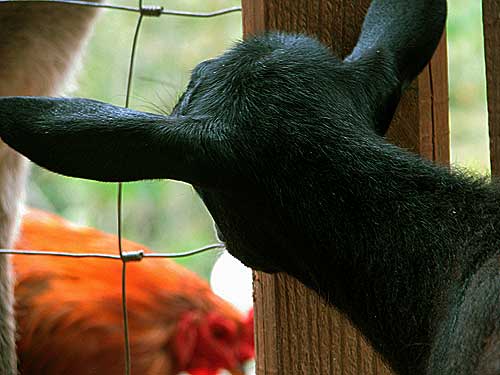 Yesterday, we drove a couple hours south to Beckley, West Virginia, where we met a man from Tennessee…. 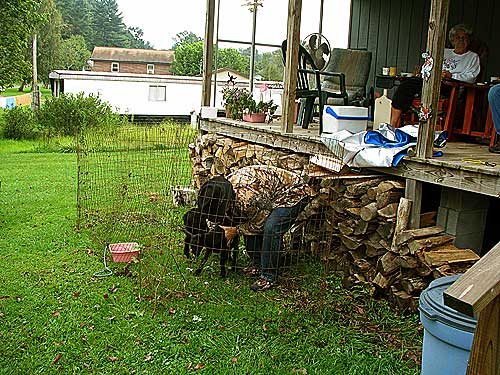 ….who bid a sad farewell to these two. 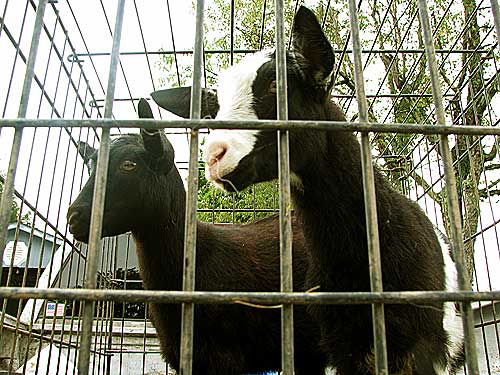 (Fanta on the left, Sprite on the right.)

I have picked up quite a few animals in the past 18 months and I have never picked one up where the previous owner was not sad, whether they were “giveaway” animals or sold. I think that’s a good thing. In my experience, people care, really care, about their animals, and that this is universal rather than rare says something good about the world.

We went straight to Wal-Mart. 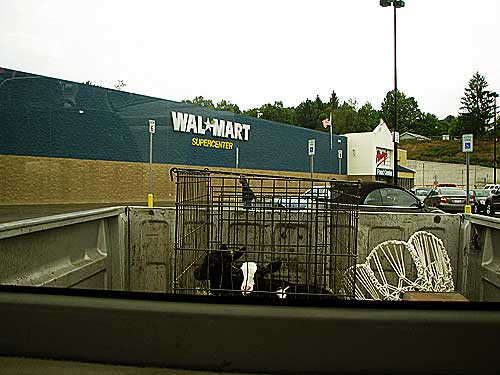 It was rainy and we needed to cover the carrier with a tarp. Sprite and Fanta attracted much interest in the Wal-Mart parking lot. Everyone who passed by had to stop and stare and smile. Goats make people smile.

One man stopped and said he went with a friend to a rodeo in Kentucky one time, got drunk, and bought 17 goats. The next day, his friend said, “What are you going to do with 17 goats?” And he said, “What goats?”

You never know what people are gonna tell you in Wal-Mart parking lot. 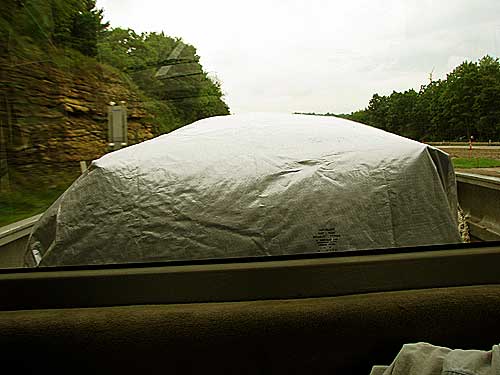 We got our two baby girls covered with a tarp and hit the road. Sprite and Fanta are fainting goats. Fainting goats have a hereditary genetic disorder called myotonia congenita that causes them to abruptly fall over when they’re startled. (It’s painless.) The story goes that this trait was bred into them so that they could be placed with flocks of sheep as bait–predators would hone in on the frightened–and thus fallen–goats, giving the valuable sheep time to escape. Or so the story goes. Fainting goats are slightly smaller than the standard goat and are classified as meat goats, though they aren’t generally raised for meat because they’re also a threatened breed. They’re primarily raised as novelties. 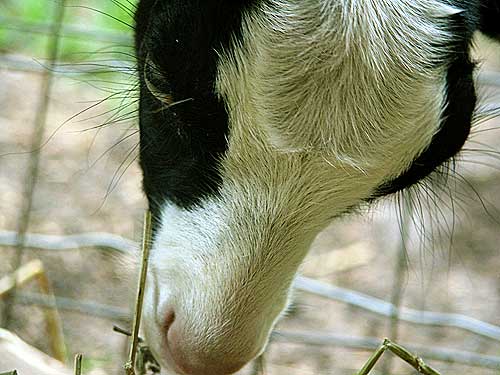 Sprite and Fanta are sisters, 11 weeks old. Sprite is black and white, and Fanta is an ebony queen. 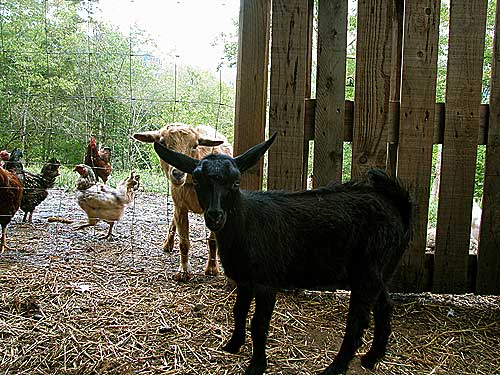 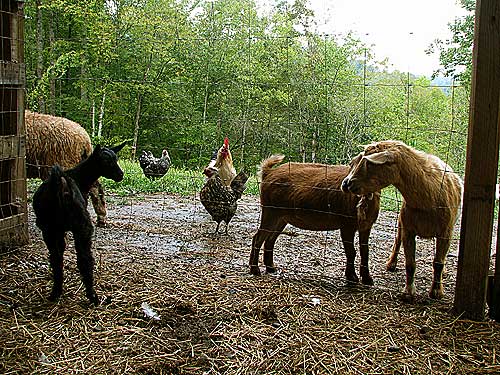 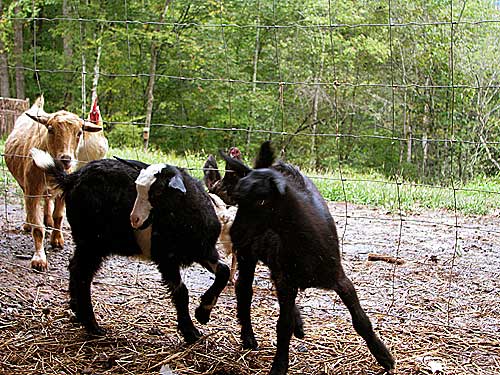 We kept Sprite and Fanta separated in the goat pen for their first night. Time to adjust to their new surroundings…. 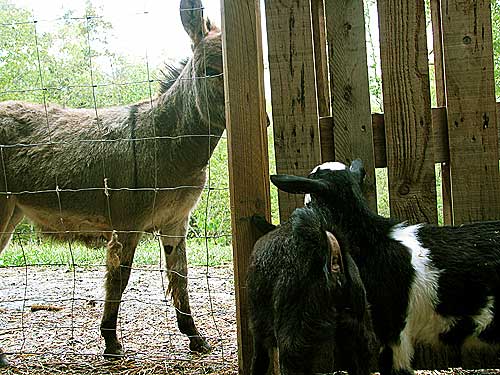 ….and time for their new surroundings to adjust to them. 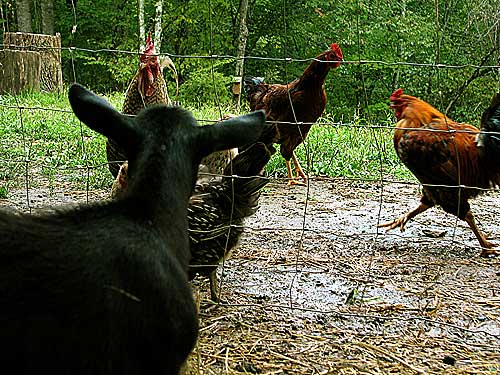 Everybody had to check them out. 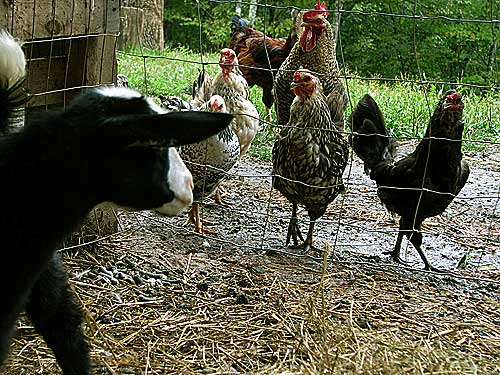 And they had to check everyone–and everything–out in return. 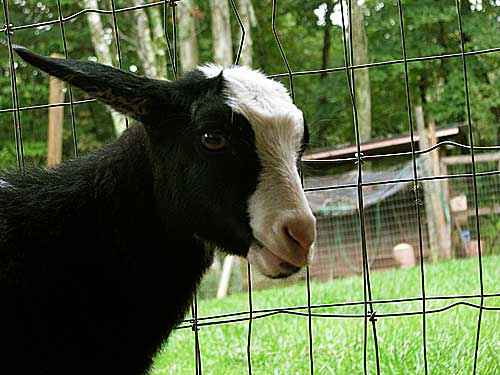 But in the end, you know there’s only one opinion that matters. 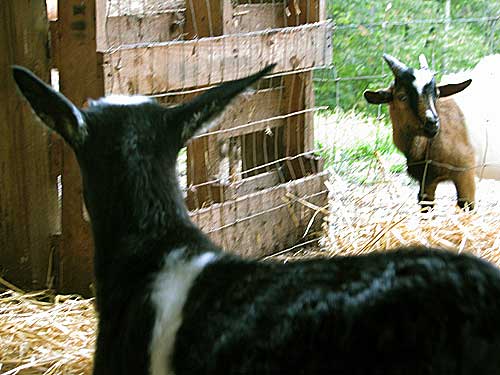 These two fainting does, along with our fainting buck Pepsi, represent the completion of our mini-herd of fainting goats. Some day, in a year, when they are old enough, they will be Pepsi’s brides. 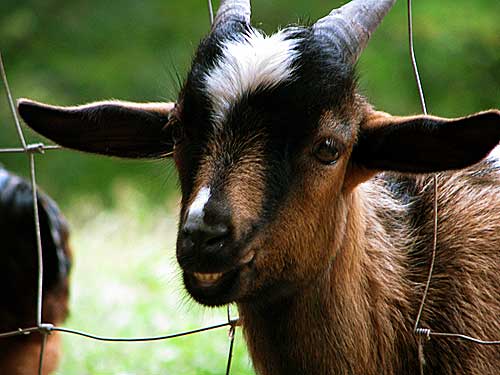