There’s more to keeping goats than handing out cookies and it was time for me to learn. Fortunately, I have my nearby goat farm mentors to show me the way. I don’t know what I’d do without them. I don’t think I’ve ever been near a goat before in my life other than at a petting zoo.

And Honey needed some work–a couple of grooming tasks and a booster immunization. 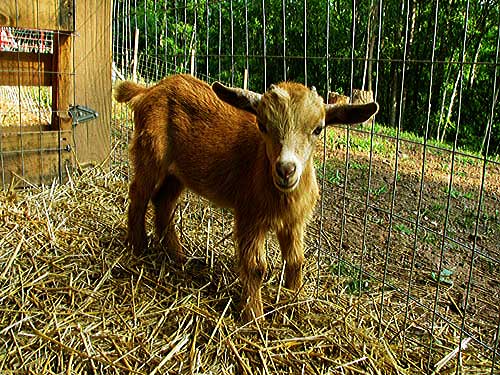 So off he went into the cat carrier and over to the goat farm. 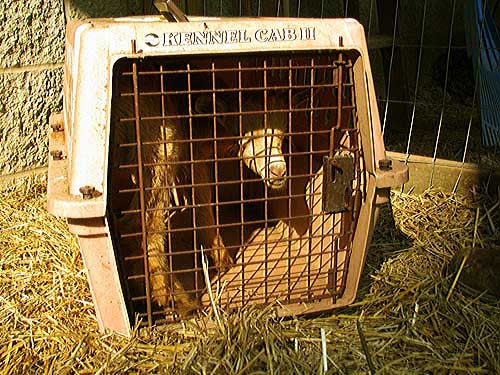 I want you all to notice how disgustingly, farmishly muddy my boots were as I got into the truck to head over to the goat farm. That’s straw sticking off the bottoms, caked in the mud. I am too a farmer! 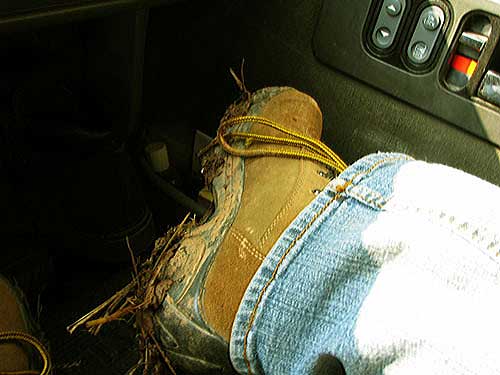 Upon arriving at the goat farm, Pete the goat farmer showed me how to trim hooves. With a baby, the goat can just be held in your arms. It’s a little trickier with a mature goat. It’s times like these that I’m glad I have miniature goats. Hooves need trimming about every six to eight weeks in the summer (less often in the winter). Pete and Missy trimmed Clover’s hooves before bringing her to us, so it will be a few weeks yet before we have to tackle her on that. (Maybe I can just get Coco to lay on top of her and hold her down?)

First, you should clean out all the gunk with the tip of a strong, sharp pair of shears, then the idea is to cut off all the hoof material that has grown past the fleshy part of the foot. 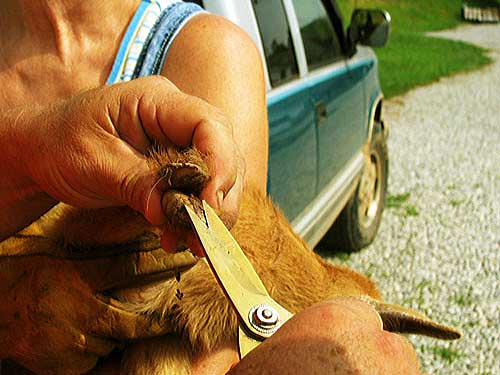 Pete trimmed one hoof, then it was my turn. I had to trim the other three. It’s sort of like cutting a baby’s nails for the first time and you’re so scared you’re going to hurt them. Pete said, “They’ll let you know in a hurry if you cut too much.” And so I clipped. And clipped. Trying to get Honey’s hooves smoothed off. 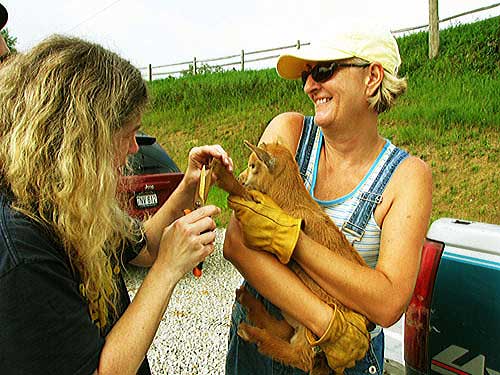 It was the longest hoof-trimming in the history of hoof-trimming. I was scared to death. Honey, on the other hand, was quite calm. He is a honey. So sweet!

And worse than hoof-trimming was on the agenda.

This is a box used for tattooing and disbudding. 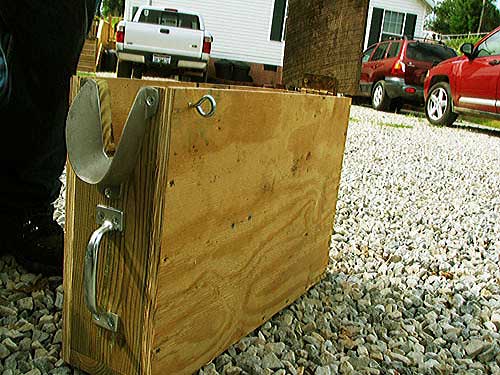 As you can see, it’s a simple-to-make home-crafted box. There’s a lid with a latch, a metal plate for the goat to rest their neck, and the box is narrow enough to contain the baby during tattooing or disbudding. Towels are inserted inside to support the baby and prevent them from trying to sit down in the box. A handle makes the box easy to carry if you need to move it around.

Honey was placed in the box. 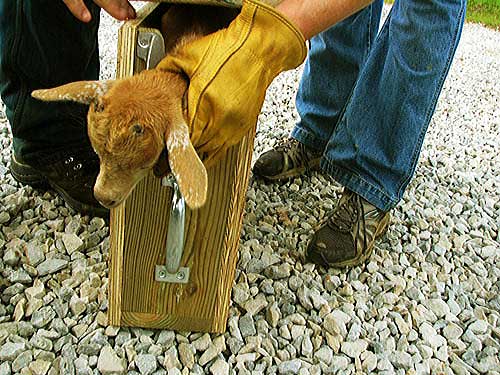 Before Honey and Nutmeg were brought to us, they were disbudded. Bucks have stubborn horn buds and sometimes they have to be disbudded a second time.

There are advantages and disadvantages to having a goat with horns. Horns are beautiful and can serve as some measure of protection against predators. They also actually cool the goat. However, horns can be dangerous, both to other goats and to the humans taking care of them. A horn can put out an eye–on a goat, or a child. In particular, if you intend to have children around your goats, horns are a risk. Disbudding destroys the horns as they sprout, before they have a chance to grow. (Dehorning is an entirely different process involving the removal of existing, grown horns, and is a very painful and risky surgical procedure.) Disbudding is a quick process, and provides comfort that your family can be around your goats without fear. In our case, we feel it’s important for our goats to be disbudded for the safety of my children and others who visit us. Clover is disbudded, so when she occasionally head-butts cats or dogs or even children, she doesn’t hurt them. We need the same assurance with Nutmeg and Honey.

A baby should be disbudded within a few days of birth, and again as soon as any stubborn buds try to re-sprout. Honey was sprouting. 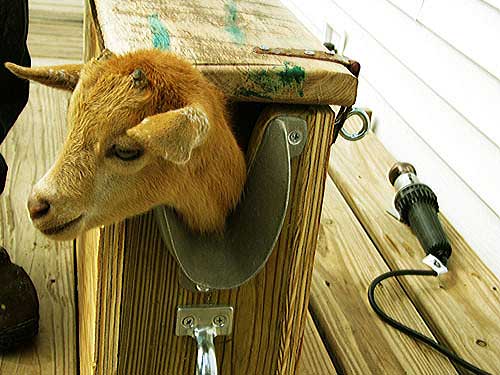 The recommended method for disbudding is to use a specially-designed electric disbudding iron. The iron should be hot enough to “brand” wood. While waiting for the iron to heat, we checked Honey’s teeth.

I don’t know why we checked his teeth, but it made me feel very farmerish. And scared of sticking my finger in his mouth ever again.

He also got a booster immunization shot while he was tucked in the box. 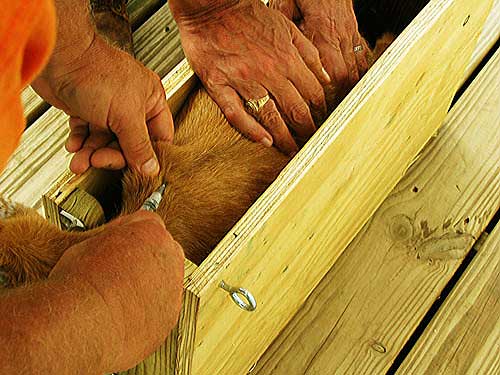 Then he got bored and took a nap. 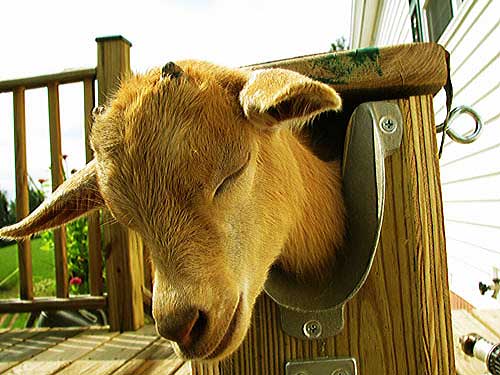 He woke up when it was time for disbudding, that’s for sure. It was hard to watch, and I imagine even more difficult to do, though it only took eight seconds. It takes one person to hold the kid’s head and the other person to press the hot iron to each horn bud.

Real life, real farming. I just want to dole out cookies…. It’s hard to be a farmer.

(Warning: the next photo isn’t easy to look at. It was even harder to be there.) 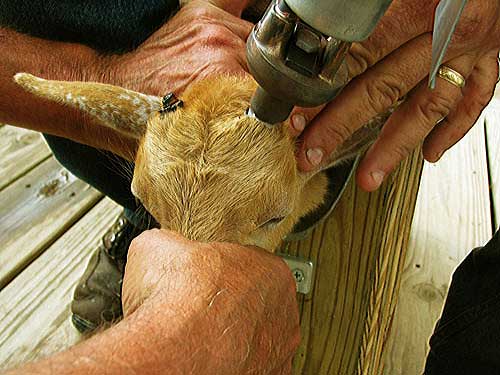 Immediately afterward, Honey’s eyes were covered and an anti-bacterial anesthetic was sprayed on the horn buds. In the next several days, the horn buds will shrivel and fall off. 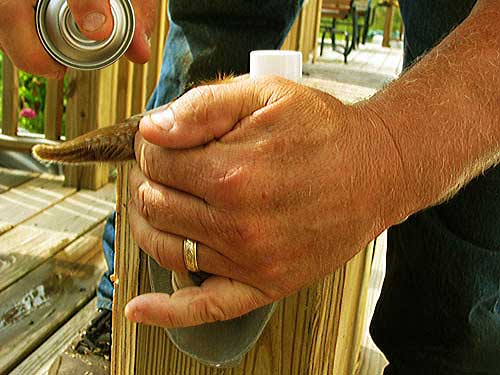 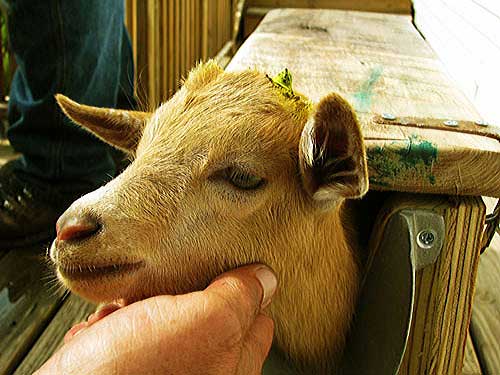 And we took him home. Clover was happy to see him. 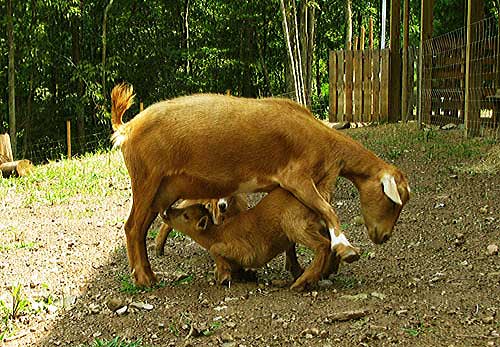 And he climbed under her big udder and life was good again.

Me, I think I need one of Clover’s cookies…..