Clover, Nutmeg, and Honey arrived yesterday evening, in this crate, in the back of this pickup truck. 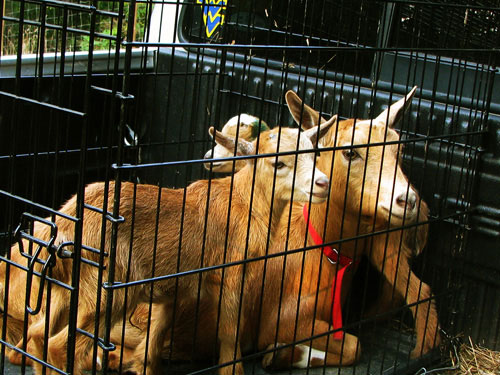 It was late by the time we got them situated for the night. Clover was worried. The babies were confused. Coco was excited. Dookie got a smackdown (from Clover!). I was scared the goat lady and her husband were going to leave me alone with the goats and then THEY DID. Then everybody chewed on some weeds and went to bed.

I have pictures and stories to share, so for those of you who come early, come back if you can. I will add updates to this post during the day today with more pictures of Coco meeting the goats, Clover and the babies settling in, and how we’re doing today. It’s an exciting day on the farm!

They’re here! And I woke up this morning and they were still here! I’m doing good so far.

This was Coco’s last free moment before her life changed forever. She was innocently planning an evening of carrying shoes off the porch and cavorting in mud puddles. 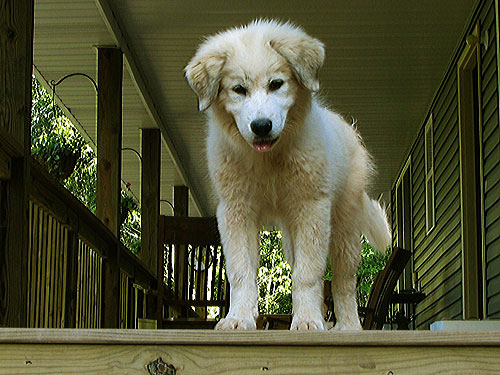 Then this truck drove up. 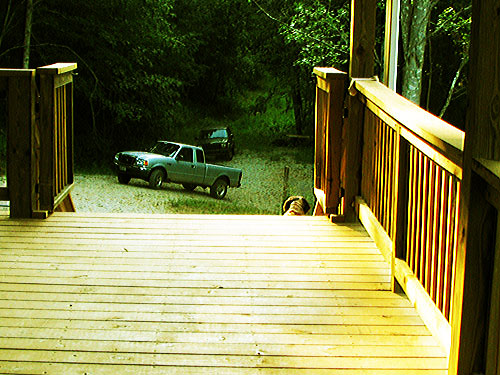 And people starting carting work off it. 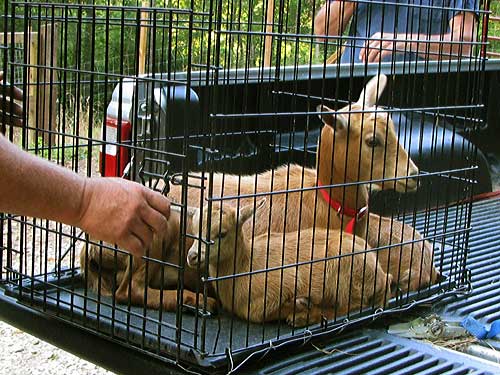 Clover was in no hurry to get out of the crate. It took some encouragement and some cookies and some downright dragging. 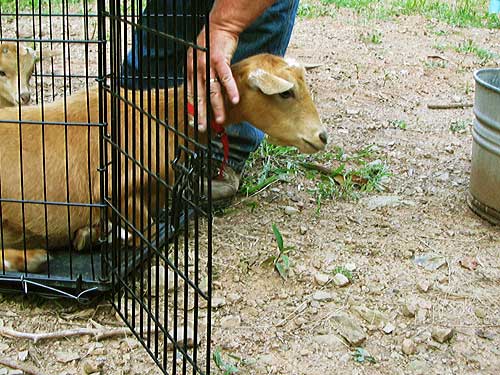 Coco, still unaware that her life had just changed, was thrilled! GOATS! 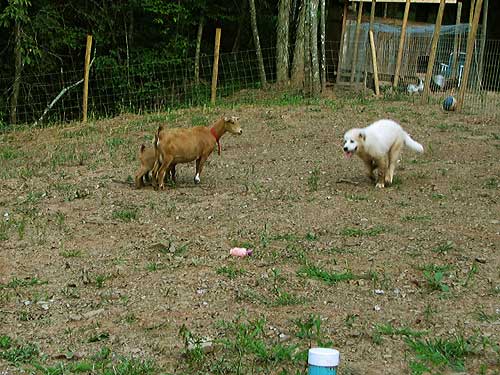 She could hardly contain herself. 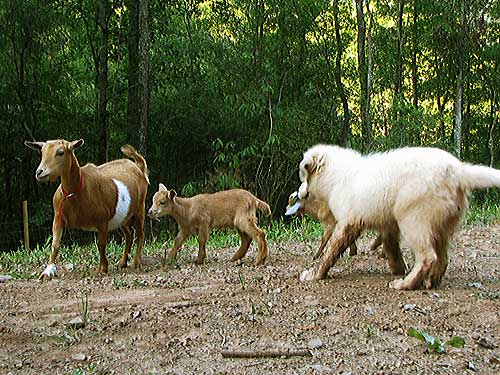 Well, actually, she didn’t contain herself. She bounced and circled and frolicked and asked Clover if she liked carrying shoes around, too. 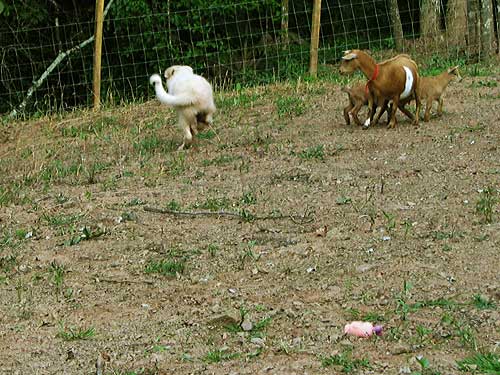 Though she couldn’t stop frolicking long enough to hear Clover’s answer, which was something like, “No, I do not carry shoes. I eat shoes.” 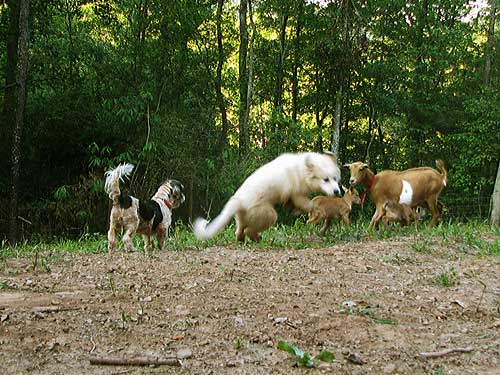 Then the little farm shih tsu got involved. 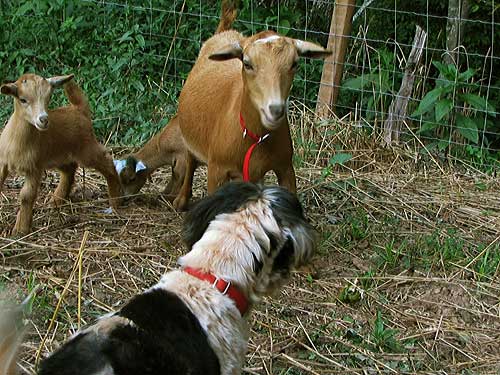 He thought maybe these were some giant cats imported to our farm for his little-man-syndrome torture. 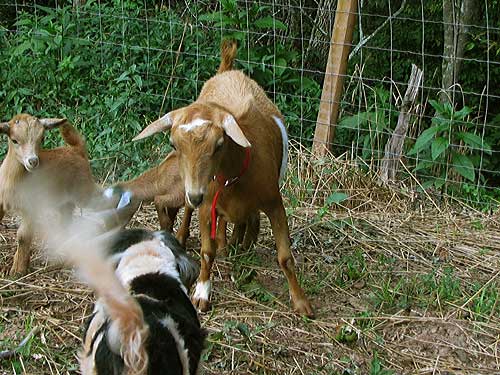 Immediately after this picture was taken, Clover head-butted him across the farm. Okay, not across the farm, but about a foot, and Dookie decided he was not interested in goats. He was not, of course, scared of Clover or anything. He decided, all by himself, that it was just not his thing.

He’s gotta have his pride, ya know. 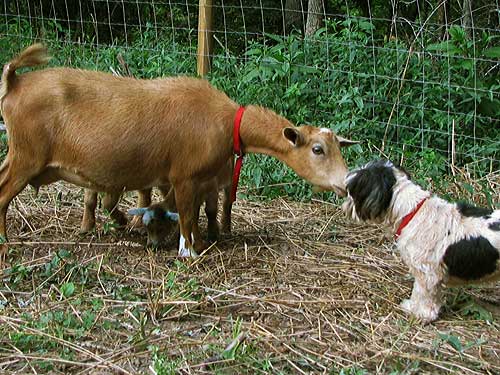 Coco stopped bouncing and got all respectful and kept her distance for a bit while Clover met the chickens. The chicken welcoming committee lined up for the formal greeting ceremony. 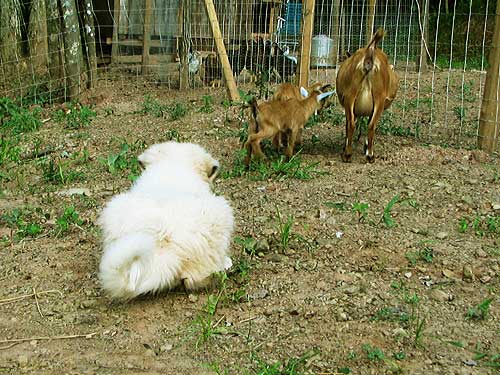 There was some whispering amongst the committee members. “Another disappointing development. A giant puppy, now goats. What next? Ducks?” 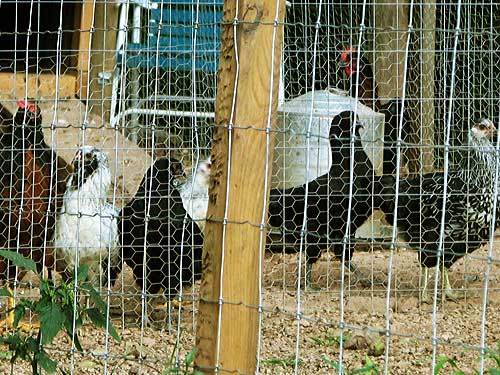 Coco followed her new little family around their little field and Clover tolerated her pretty well. Nutmeg and Honey just followed Clover around.

“We go wherever Mama’s udder goes.” 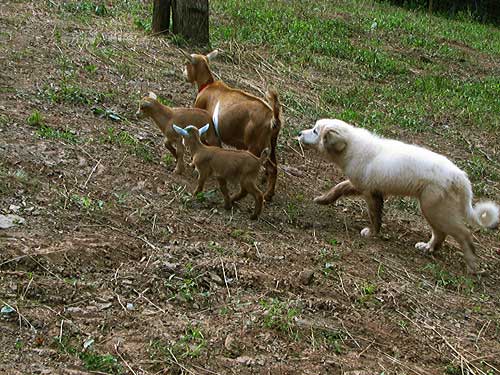 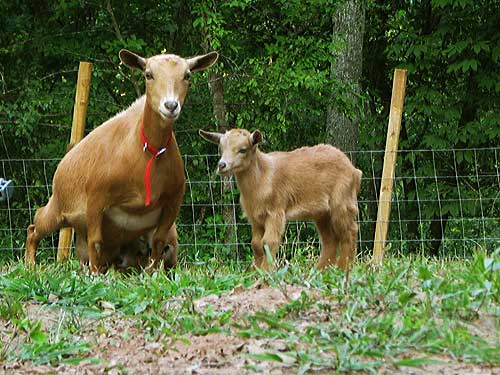 Or alternately: “Leave me alone, you crazy woman!”

I’m not sure yet if Clover likes me. I haven’t tried to touch her udder yet. The babies are about three weeks old and still nursing. I’m probably going to give it a few more weeks and let the babies get close to weaning before I start milking her. In the meantime, we’ll get to know each other and I’ll talk Clover into being my friend. I have treats.

I’ll post another update with photos from today this afternoon if you’d like to come back and see more!

Clover spent a lot of time “talking” this morning. I think she was looking for her goat friends and wondering where they went. She settled down after a while and I gave her some cookies and talked her into letting me take off the collar that they’d put on to help get her into the crate yesterday. 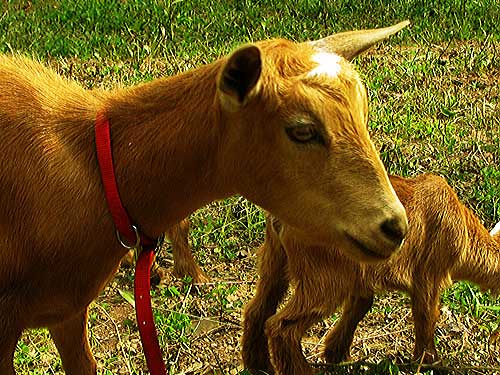 Then I said, “How about letting me touch your beautiful udder?” Just, you know, so she gets used to it. She hasn’t been milked before. 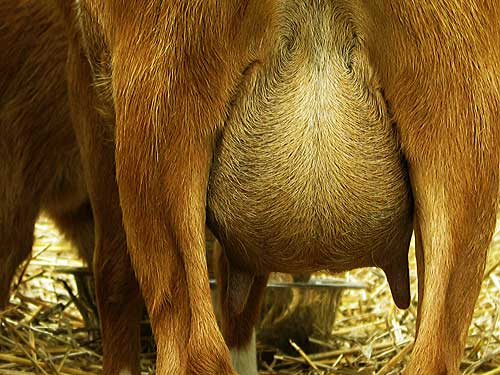 Clover was having none of that. 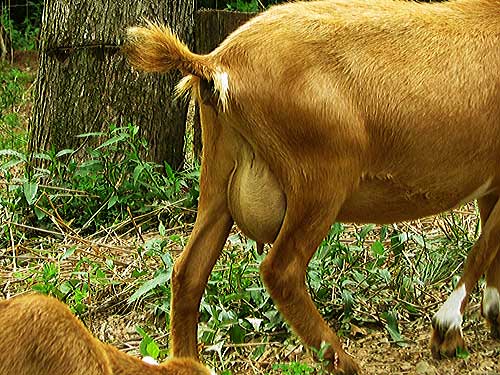 But there’s always tomorrow. And the next day. And the day after that. I have a lot of cookies.

And today, this is the view from my front porch. 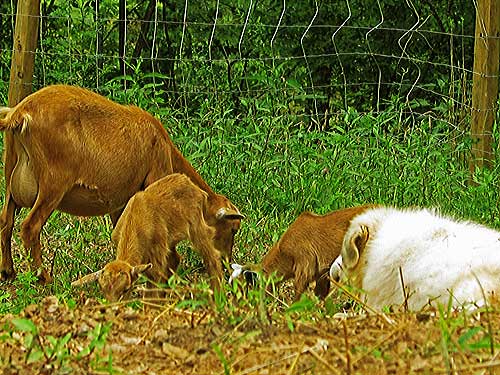