This past Friday, I spent 12 hours in a truck with my cousin going to Pennsylvania and back to pick up Roman Reigns and Valentina. His old truck can hit top speeds of 60 mph, though I think he was only going 40, but we don’t know because it doesn’t have a speedometer. Or odometer. Or shocks. Or a phone charger plug-in. Or a radio. Or much heat. So in other words, this involved a lot of whining. I’m lucky he didn’t push me out somewhere around the Cumberland Gap. Thank you, Mark!

But we made it…..to Breezy Way Farm. Breezy Way Farm is a small family-run Grade A goat dairy in Bedford, Pennsylvania. This adorable video comes from Trickling Springs Creamery, which sells their milk.

I was fascinated to see inside their milking facility. They can milk a couple dozen goats at a time in here. 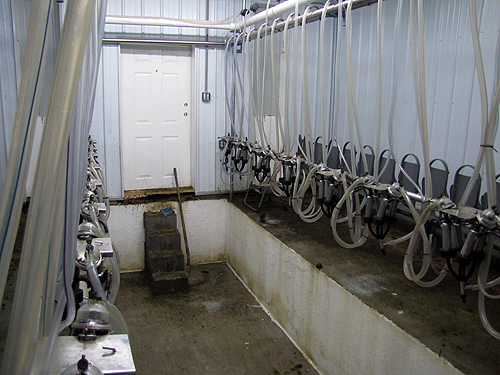 Then I went to see Valentina. She’s saying goodbye here. 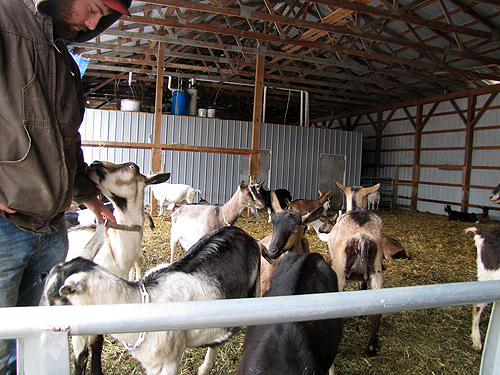 Valentina is a registered Alpine. Alpines are the highest producing goats amongst the dairy breeds. I’ve been milking Bella, who is a mini-Nubian, but I need more milk to keep up with the demand I’ll have with workshops coming up. Adding an Alpine to my little group of dairy girls here is just what I needed.

Annie wishes she could help, but–like Cherry–she’s still a baby. 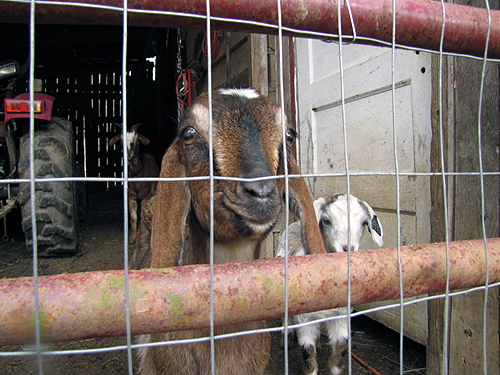 Valentina had babies a couple of weeks ago and her milk is still coming in, but she’s up to nearly a quart per milking now and I’m milking her twice a day. She greets me at the gate, ready to go to work. She’s a professional, after all! 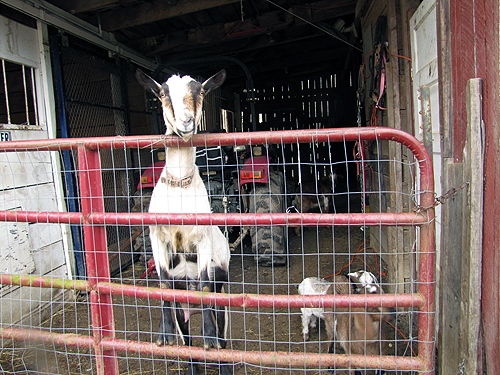 She’s kinda like a giant compared to my other goats. 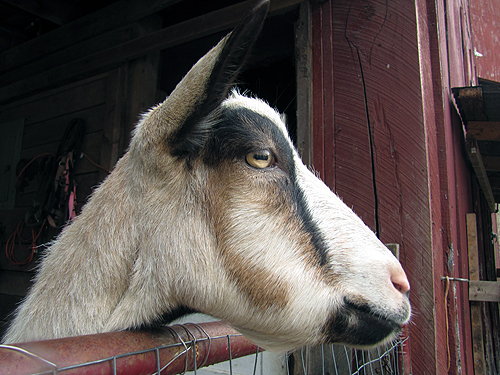 Alpines are standard-size goats with upright ears. Isn’t she a pretty girl? She’s very docile and tame, as you’d expect from a goat that came out of a dairy setting. She runs right into the milking parlor into the converted cow stanchion. 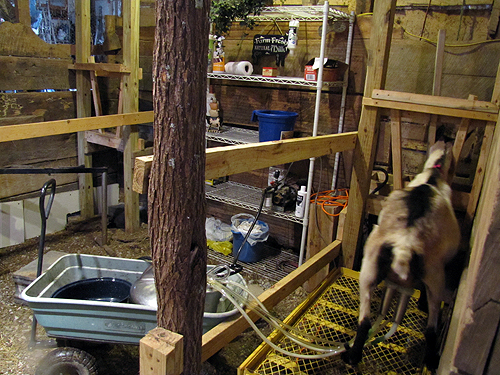 I have two cow stanchions in the milking parlor, and the second one has been modified with a goat-sized headlock to milk goats. Her step-up is simply a plain old run of the mill garden cart, with the sides flipped down. 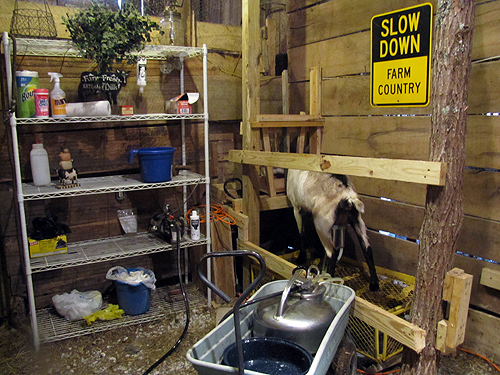 I’m milking her with the same machine I use for my cow. 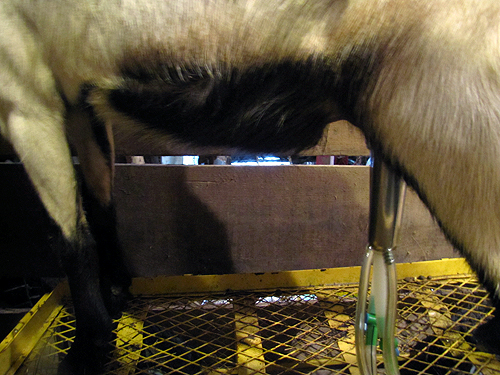 Now, about Roman Reigns….. He spent the return trip from Pennsylvania on my lap. Currently, he’s sleeping in a pen in the house and spending days on the porch with his new best friend, Precious. 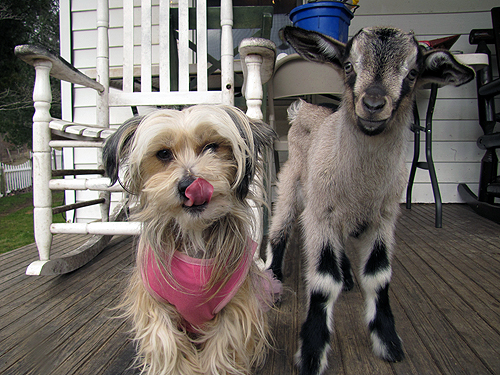 (If you don’t know why I named him Roman Reigns, you weren’t paying attention here.) 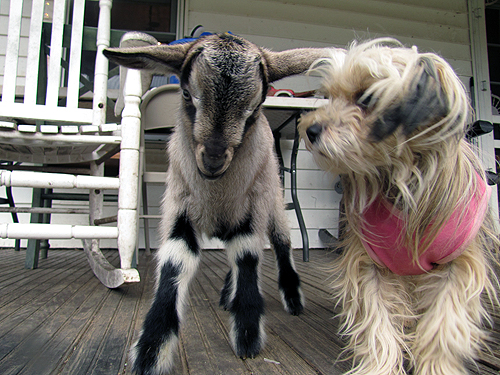 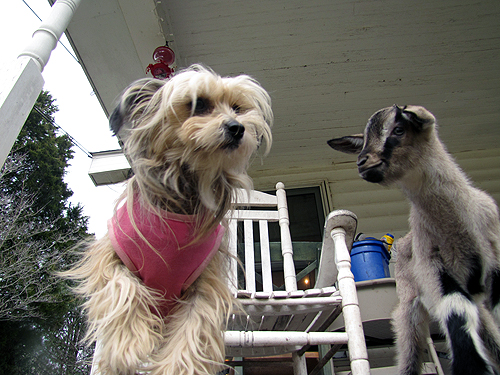 I love a bottle baby! 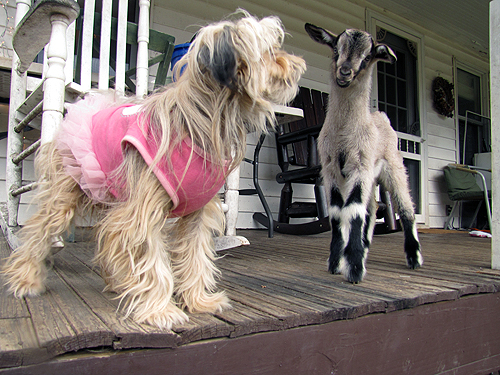 He’s lucky I haven’t put a dress on him. 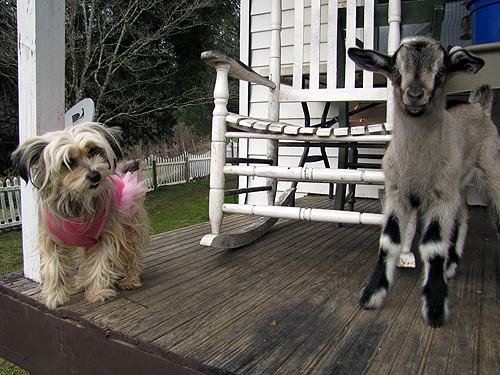 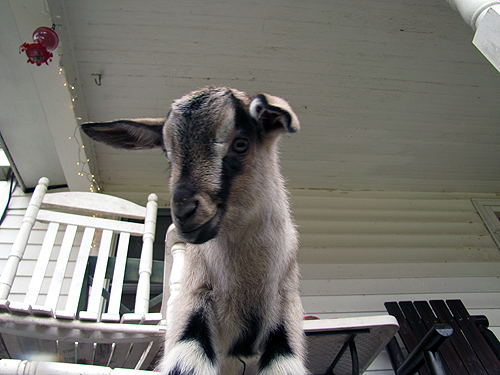 He’s not Valentina’s baby. He’s an unrelated Alpine buckling, here to grow up to be Valentina’s boyfriend so we can have new Alpine babies next year.

Meanwhile, between Annie, Cherry, and Roman Reigns, there’s lot of goat baby fun on the farm, and with Bella and Valentina, plenty of milk! If you’ve checked out my Retreats & Workshops page lately, you’ll see I’ve got goat workshops coming up. They’ve been filling fast. Here’s the lowdown on those workshops if you’re interested.

From the barn to the kitchen, this full-day workshop has it all whether you’re planning to get goats or just love cheese. Learn the basics of selecting and raising dairy goats, along with management, housing, feeding, and milking. Practice hands-on milking a goat by hand and by machine then make your own cheese, both mozzarella and chevre. You’ll also make a batch of goat’s milk soap as you learn the hot process method of soap making, and make your own goat’s milk fudge and ice cream as well as how to make homemade waffle cones, ending your day with your own sweet treats! This day also includes plenty of chances to pet the goats, feed treats, and play with the babies! Take-homes include your own goat’s milk soap. 8:30 a.m. to 5:30 p.m. Breakfast, lunch, and supper are included. One-day workshop. $125. See information below to sign up!

Get all the details and dates currently available here. 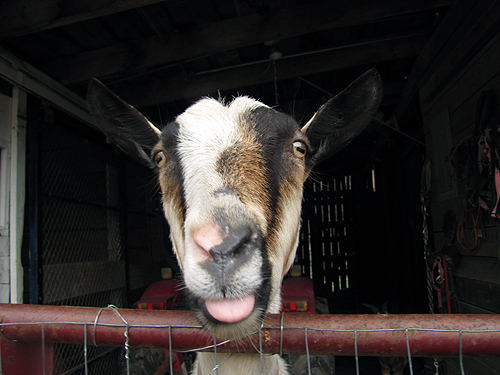 Valentina’s waiting for ya!

P.S. You can find Breezy Way Farm here, and they do have babies and milking does available regularly.