I started trying to wean Glory Bee in May. Since then, she’s been separated from BP except for during the month of July when I sent her over to Skip’s with BP. I had discovered already when bringing BP through the goat yard to go out the driveway and down the road to Skip’s farm to meet the bull that Glory Bee wasn’t weaned. She would latch on to BP when we brought her through the yard. When I took her to Skip’s the second time, in July, I sent Glory Bee with her since I figured, she’s not weaned anyway, might as well make use of her so I don’t have to haul over to Skip’s every day to milk BP.

When I brought BP and Glory Bee back from Skip’s, I was shocked that BP hardly had any milk left. I wondered if Glory Bee was really milking her that much, after all, and I milked BP twice a day for a couple of weeks after she came home to get her production back up to normal. A gallon to a gallon and a half per day, which is all I want or need and more. When she came back from Skip’s that second time, the first morning, all I got from her was a QUART! After milking her hard for a couple weeks, I got her back up to what BP and I like to call our normal, and I went back to milking her once a day.

Meanwhile, Glory Bee was back in the goat yard with her goaties. Glory Bee is quite willful, if you haven’t noticed. She loves her goaties, but she could be a bit careless around them sometimes. The term “bull in a china shop” as applied to “heifer in a goat yard.” Plus, she was really hard on the yard. 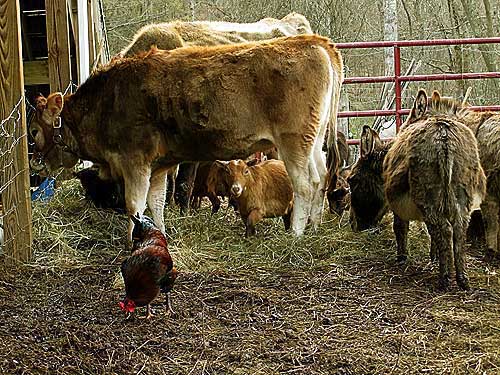 This photo was taken late last winter when I had BP and Glory Bee both in the goat yard for awhile. As you can see, even then Glory Bee was a giant amongst the goats and donkeys.

Now, the lambs had grown, and were ready to go down to the meadow bottom with their mamas, and I waited until after the Party on the Farm for the big move so party attendees could more easily enjoy the lambs and Glory Bee. Three weeks ago, after the party, the sheep moved down and Glory Bee moved over to BP-land. Surely she was weaned! After all, she’d been separated from BP for yet another month, and I had evidence that when she’d been at Skip’s with BP, she hadn’t been doing a very good milking job.

Only as soon as she got into BP-land, she started stealing my milk and I was down to a quart a day again, only this time I knew BP had it in her–somebody else was getting it. I didn’t want to put Glory Bee back in the goat yard–we are in the midst of doing some “recovery” work in there, grading down the build-up and hopefully soon (if it ever quits raining long enough) planting some grass, and possibly moving Mr. Pibb and the girls to the buck yard at the pond to give the grass a chance to start. Definitely don’t need a heifer back in there. I’ve thought about taking her to Skip’s, but his fences are less than secure and I’m worried about Glory Bee’s motivation to escape and get back to mama–and being a mile away, possibly getting lost. If she’s going to escape, I want it to be on our farm where she won’t go any further than down the road where the Ornery Angel can call me and tell me, “Your cow is in my yard.”

We were going to move Jack and Poky in with her to the first field to be companions, but she didn’t stay down there long enough.

She spent Sunday night in the orchard next to BP-land and I got her back in yesterday morning after milking. Lately, I’ve found it easier and easier to handle Glory Bee. We put up a separation fence in BP-land and I’ve been separating Glory Bee and BP every evening so that at least I get the first milking in the morning. When it’s time to separate them, I snap the lead on Glory Bee’s halter and lead her to the separation fence and shut the gate. Leading her has been unbelievably easy. There was a time when I couldn’t lead her at all because it was like trying to lead a spastic Tasmanian Devil and I wasn’t strong enough to control her. Now, as soon as I snap the lead on her (and she is friendly enough with me now that she lets me get close to her when I need to–she loves to have her head scratched right behind her topknot), she leads quite easily. One day last week, I was leading her back to the separation area and I was so excited, I said, “Glory Bee, you are making me feel so good about myself! I AM going to be able to milk you some day!” I don’t know how to explain how this change occurred other than months and months of daily effort while she was close at hand, in the goat yard, and I approached her every day at the fence line, where she felt more comfortable with the fence line between me and her, and slowly taught her to accept my attention and handling and she came to love those head scratches. Later, I could handle her inside the fence, without the fence between us, but I hadn’t been spending any time training her to lead, so this was new.

Of course, she is still quite willful, but she CAN be handled. By me!

However, it’s getting muddier and muddier out to the separation fence with all the rain lately. The only hope now is a freeze. (Question: What is the one reason a farmer would look forward to winter? Answer: Frozen mud instead of swamp mud.) After I brought her back into BP-land yesterday morning (following her escape from the meadow bottom), I knew I’d have to just about give up on milk until we got another charger and wire and got electric set up around the inside perimeter of the first field in the meadow bottom where I wanted to put her back. It was so muddy last night, I gave up on the idea of wading out there to separate them. This morning, I brought BP out to milk, thinking there wouldn’t be much to be had since Glory Bee had been with her non-stop for 24 hours and had had the first swipe at it. I expected about a pint.

I got nearly 3/4 gallon–which means Glory Bee is certainly not taking as much as she has been. To get that much milk, with Glory Bee not separated overnight, is unheard of.

After all the mental, physical, financial, and logistical gymnastics I’ve been doing for the past three weeks trying to figure out how to get her separated (and stay put), not to mention months of trying to wean her, has Glory Bee decided to wean herself?

We can’t set up the new electric in the first field till the weekend. I’ll wait till Friday to buy the charger and see how the milk goes the rest of the week.

Meanwhile, the truly big stumper: Is BP pregnant–or not? I started tracking her heat cycles, wanting to get her bred no later than July. I had her over at Skip’s for three heats. I thought she got pregnant on the second heat but left her there for the third to see–and she had no bull attention on what should have been time for that third heat.

I took her home and watched for the next heat time to see, and I thought she was pregnant….. Then the day after I expected her to be bellowing, she bellowed! I thought, well, she’s NOT pregnant! The next expected heat time was retreat weekend. I was unable to observe her then. I had been told she could have some “false” heats after being bred. I waited again for the next appointed time. If she was going to go into heat again, I expected her to show some sign of it anytime between last Thursday and yesterday. The only time she bellowed during that time was last Thursday after milking, when I slopped out through the mud to the separation fence to open it up. Glory Bee had run off on the ridge and BP was distraught because she couldn’t find her. 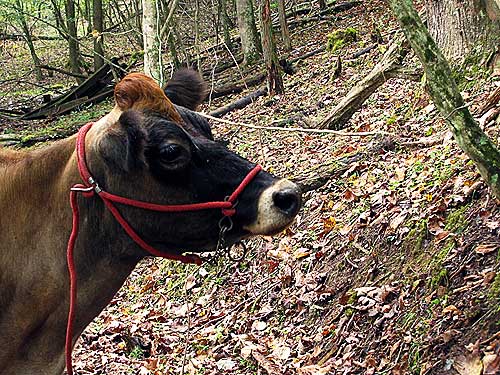 She always looks for Glory Bee right away after milking because she knows that that is when they can be together again. I slopped back out there and helped BP call Glory Bee down from the ridge. 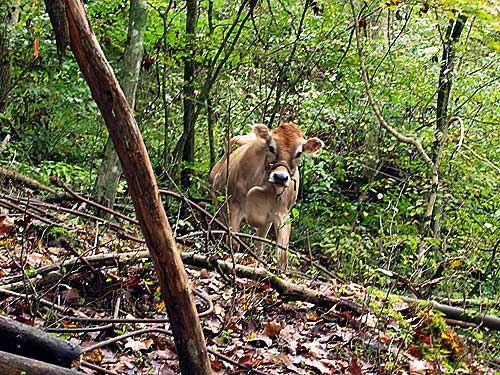 What BP looks like when all is right in her world: 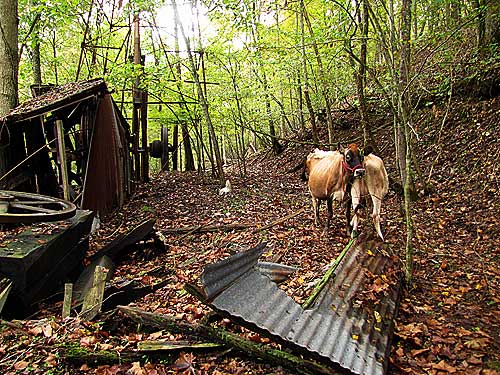 Photo taken at the old derrick in BP-land, my pile of junk.

Completely aside, I just finished a really great book called The Dirty Life by Kristin Kimball. Excellent read, except for the part where they separated a calf immediately after birth from its mother. The book is about how they built a “CSA plus” (including meat and dairy) from scratch, so they needed the milk for their members, but reading about a calf being separated from its mother immediately after birth was almost painful for me after observing BP and Glory Bee for the past year. I know, I know, circumstances are different on different farms, so I’m not being judgmental, but that part was just hard to read. Very good book, though. I recommend it.

So I marked the calendar and have started waiting another three weeks……. Is this cow pregnant? OR NOT? If she’s pregnant, I believe she’d be about three months along, and I’d really like to know, and I kind of need to know. Should I be planning for AI, or planning for her drying-off time? Last summer, when I was wondering if BP was pregnant, I was advised by you, the wise readers, to check out how she looked from behind, that she should be lower and larger on the right side. (See the pictures here, and of course, we know now that she WAS pregnant then.) So, I took these photos of BP this morning. She does look lower and larger on the right side. 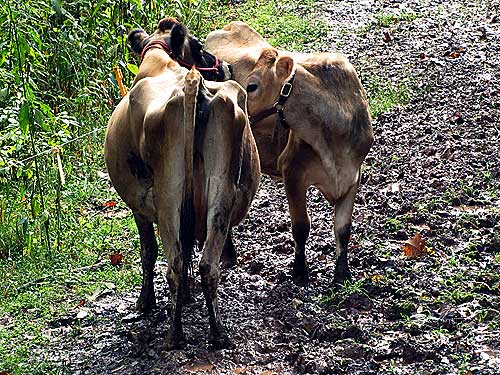 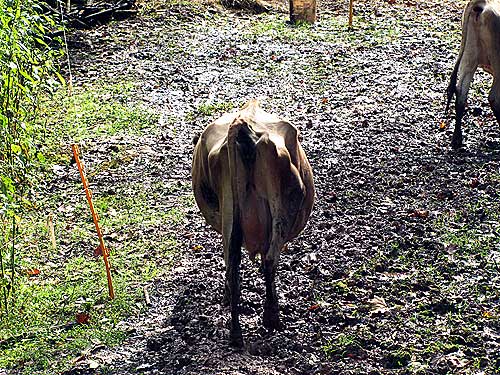 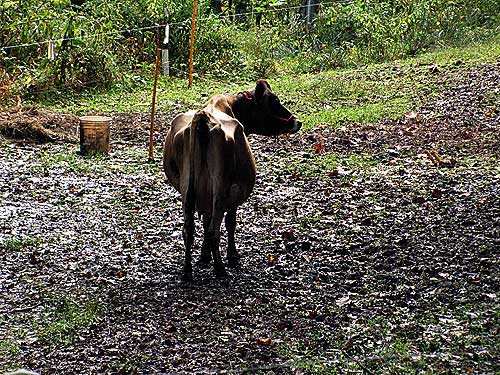 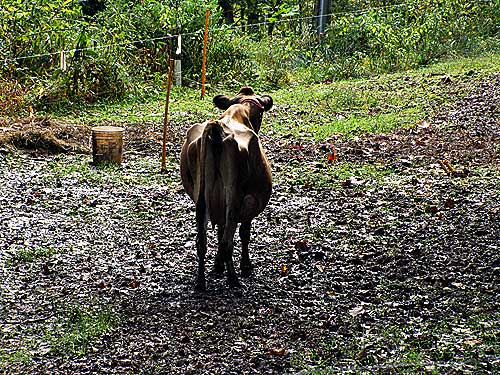 Is my cow pregnant? Or just misshapen? Or maybe she has a tumor. NO FARMING EXPERIENCE REQUIRED TO ANSWER. YOU CAN LIE. (Though if you have actual farming experience, with cows, tell me so I can know whether or not you’re just encouraging me in my moment of darkness.)