Yesterday was Day 23 since I put the first batch of eggs in the incubator after our trip to the chicken farm. I’ve held out and held out, unable to bring myself to dispose of those eggs that I accidentally overheated during the first day of incubation. The temperature in the incubator exceeded the level that can kill chicks. Yet I hung onto them, candled a sampling of them after a week, and again after another week, and didn’t see anything in the ones I candled while easily spotting babies in the second batch. But still I couldn’t bring myself to get rid of them. I turned them in a faithful yet hopeless spirit. I had to turn the second batch anyway. What’s a few more to turn at the same time? Princess didn’t want me to get rid of them either. She was convinced they would be okay. I didn’t want her to be disappointed, so I delayed.

Yesterday, starting to worry about the second batch of eggs (today is Day 21 for them!), I decided it was time to do the right thing. I can’t have bad eggs exploding and hurting my good batch by infecting the incubator. I decided to load the first batch up, take them outside, and break one open just to reassure myself that the cause was really lost, then toss the whole batch in the woods. It was easy to pick them out as I had marked them differently–the first batch was marked for turning with X’s and O’s, the second batch with A’s and B’s. So I got an empty egg carton, opened the incubator, and started taking them out one by one and placing them in their sad little casket.

And I thought, maybe I am too stupid to be a farmer? I screwed up the first thing I did. 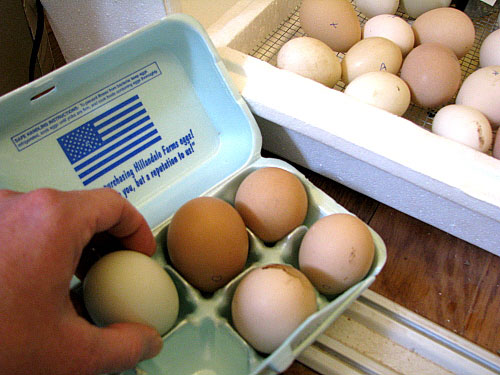 Then, as I placed yet another egg in the carton, even in the moment that I took this photo to chronicle the sad post that this was to be, I heard something.

And I looked back at the incubator.

–HAD A CRACK IN IT! And it was PEEPING!! 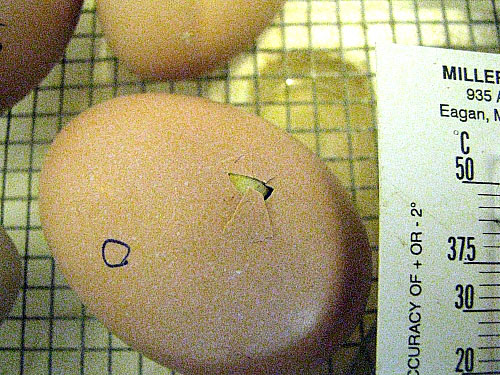 There was a BABY in there!!!!! I quickly put the other eggs back.

And within a few hours, out this baby came. 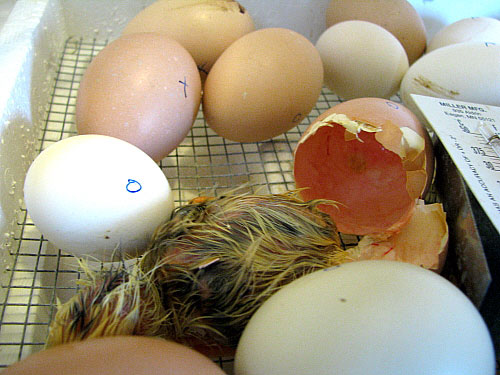 None of the other eggs in the first batch have the least crack. Is this the sole survivor? I asked Princess what we should name it.

And at first Lucky looked so tired. He flopped around and rested his weary, lucky, shell-cracking head on a brother egg. 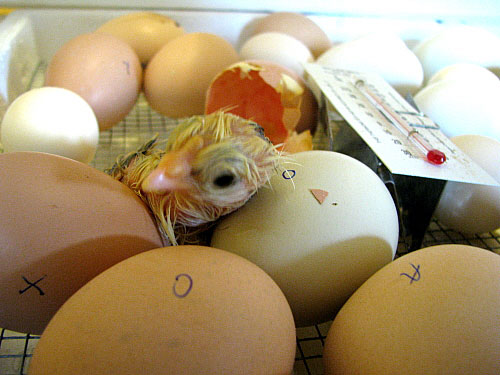 Then he got rowdy and started climbing all over the other eggs. 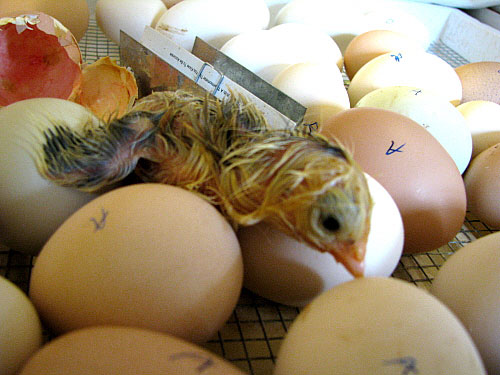 And Princess said, “We have to get it out of there! It’s going to disturb the other eggs!”

My cousin has a brooder for us, but we haven’t brought it over here yet. Yes, we’ve had 23 days to prepare, but I was busy. Getting settled in the new house and writing my book and making truffles. So, in our incompetent way, Princess and I tried to figure out what to do. We got one of the boxes we’ve been using to move things from the old farmhouse. I got the light I used for candling and put a big bulb on it. I put newspaper down in the box. But how to get the light fixed over the box to keep Lucky warm?

“I’ve got some Scotch tape in my room,” Princess said.

Uh, no! I rooted around and finally came up with this candelabra thing I could hook onto the side of the box to brace the light, then set an old address book on top of it to keep the light directed the right way. I put the box against the wall and just needed something heavy to keep it there so the address book and the light wouldn’t change direction.

“Give me a phone book!” I told Princess.

She gave me the teeny tiny county phone book.

And here is the result. What can I say? We’re two girls with a chicken. We’re doing good if that light isn’t tied on with a hair bow. 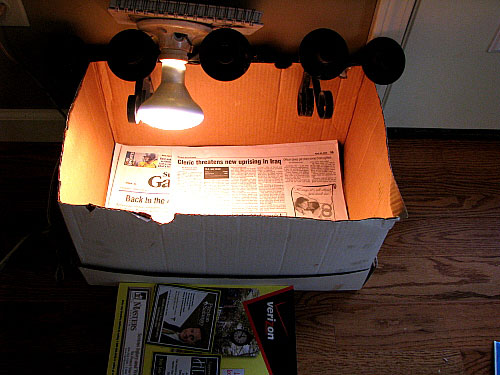 Princess got Lucky out of the incubator, sparing the other eggs his wild ways. And we set him in his little box, all by his lonely lonesome. He needs friends, doesn’t he? Maybe he’ll have some soon? 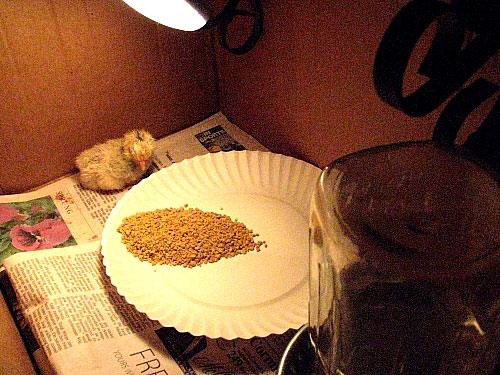 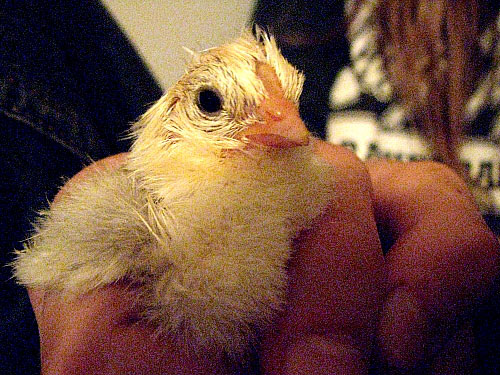