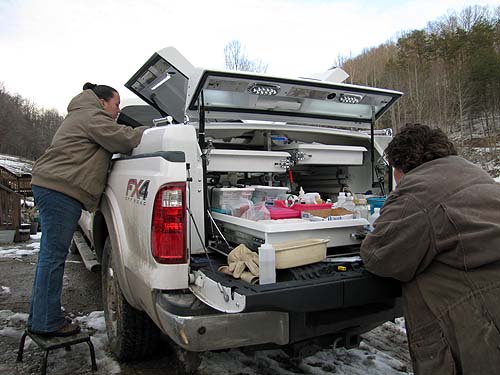 This is Dr. Clara Mason, at the tailgate of the truck, and her assistant. She’s a mobile vet. Mobile-only! No office. Works out of her truck going wherever farmers need her. I bet she has some stories….

She was at Sassafras Farm yesterday because Zip had herself a little accident. When she didn’t come down for her hay, I went looking for her and found her stuck in a piece of field fence that had been downed by a tree in our latest snow and wind. She had stepped right into the twisted fence, and cut her leg trying (in vain) to get out. It’s too bad horses don’t have cell phones. She could have called. “Woman, I’m stuck up here, come get me.” Instead, she panicked, I’m pretty sure, because that would be how she cut her leg, pulling so hard trying to release herself. After that, apparently, she calmed down because she was waiting pretty patiently at the time I found her.

I contacted Tinia Creamer from the Heart of Phoenix Equine Rescue, who hooked me up with Dr. Mason. 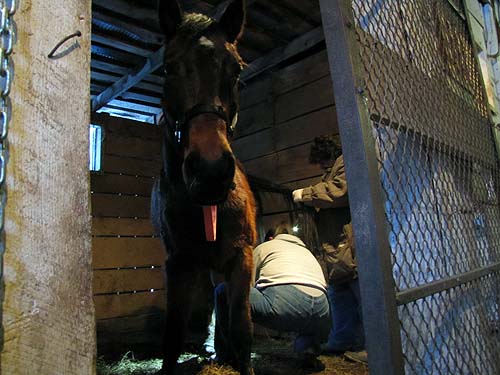 Zip was sedated so her wound could be irrigated thoroughly, treated, then bandaged. 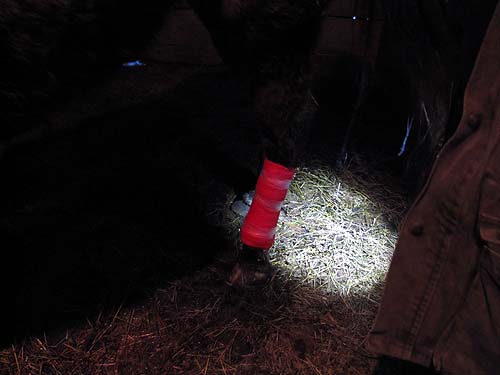 She had an antitoxin shot and is on Equioxx and Uniprim (for those of you to whom that means anything, to the rest of us it’s Greek, but it’s her medicine–anti-inflammatory, pain, and infection control). 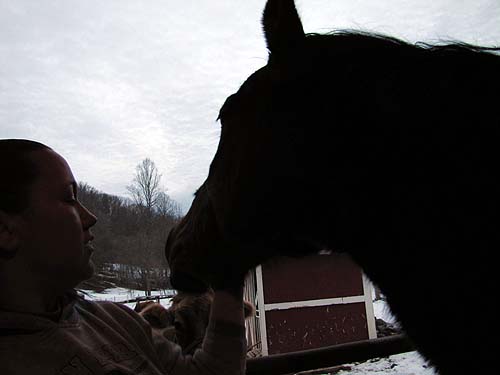 Dr. Mason will be back on Thursday for a re-check and bandage change, and to teach me how to carry on with her bandage changes afterward. Zip’s stalled in the barn for the duration. The whole thing was a little scary, but–she’s going to be okay.

And I gotta go fix a fence now……