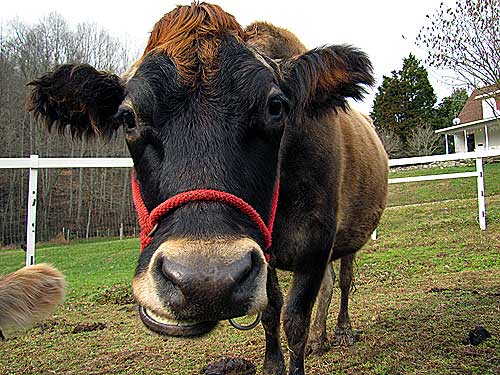 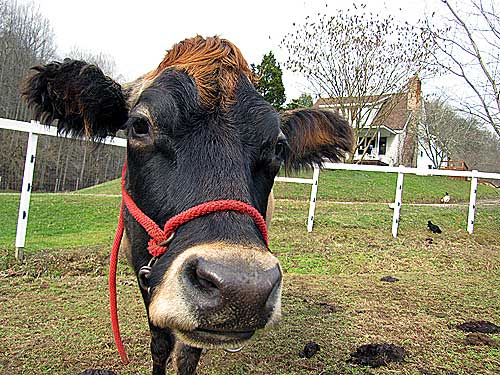 I’ve had so many questions about BP and Glory Bee! They’re here! You saw them come in the livestock trailer! You saw them eating round bales off the truck! But I know, there are so many other questions than merely if they are alive. By the way, I’ve lost count now of the number of people in the past month who have told me that their cow just plop, keeled over dead all of a sudden. I have to go count heads every morning.

I’ve been meaning to write a post about the cows–my plans, dreams, musings–when I got the time to put it all down. Which is why I didn’t want to toss off a quick answer to questions. So here is the long answer.

Sassafras Farm offers opportunities that were out of reach and unrealistic at Stringtown Rising. I have lots of ideas, but I’m going to take it slow because I don’t want to get in over my head here. I’m currently using maybe around five percent of the available pasture for animals on this farm. There are a couple of reasons for that. One is that I want to keep the animals close to the barn for the winter, and two, fencing repairs and/or electric wire additions need to be made in a number of the fields before I can move animals to them.

However, the extensive amount of pasture that is available once fencing repairs, electric wire additions, and so on are completed makes things possible that weren’t possible before. Such as acquiring a bull.

No, BP isn’t pregnant. The country preg checker and the vet agree on this, and she hasn’t been exposed to a bull since then, so I think it’s safe to say she isn’t bred. I haven’t had her checked, but to my knowledge, Glory Bee is not bred either. (I wasn’t particularly trying to breed her, but she did go visiting with BP the last time she went over to Skip’s farm.) Tired of trying to get BP to a bull when she was in heat, I considered AI (artificial insemination) or even learning to do AI myself. The simplest way to get animals pregnant is to keep the stud around, of course. And now that’s possible, so that is the direction I’m moving. I was considering getting a bull soon after moving to Sassafras Farm, but I’ve rethought that idea now. Cows are pregnant for nine months. I don’t want a fall or winter calf. I would prefer a spring or summer calf. I’m going to wait until later in the spring or in the early summer to bring a bull here, and hope for a better result in the timeline for calves.

I was considering getting a Jersey bull, but have also reconsidered that idea as I am turning over the notion of keeping a small herd of beef cattle. I have plenty of pasture for it, and can make some productive use of my farm that way. It will also open some various benefits/opportunities to me as a “real” farmer. I’ll probably start with the bull and see how it goes. I’ll be looking into an appropriate beef bull to work with my milking girls.

And about the milking. While I was in the middle of making a bunch of other tough decisions in October, I made a tough call on that one, too. I was getting ready to move not just a household–but an entire farm.

I sat down with BP and said, “I don’t think I can do this right now, sweetie.”

And she said, “I know you can’t, Woman. You would never have made it in a dairy.”

Before I moved, I dried her off. At that time, Glory Bee was on her second calf weaner, which she managed to throw off several days before the move. Miraculously, she seemed to be finally “cured” of her milking and she hasn’t bothered BP a bit. Weaned, at fourteen months! It’s a big accomplishment! REALLY. MAYBE. I don’t watch the cows 24/7, so I can’t be sure she’s not sneakin’. 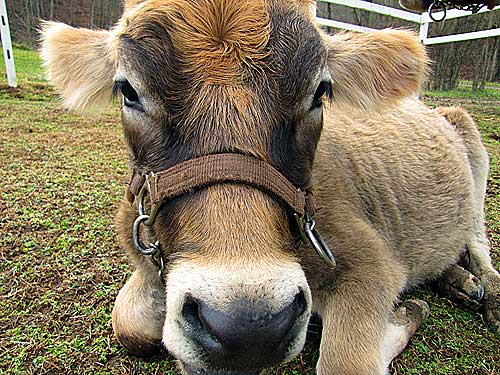 So, I may be out of fresh cow’s milk for at least a solid year as I won’t be bringing a bull here until spring at the earliest. Drying off a cow that’s not bred is a hard decision, but now that I’ve lived through the past two months, I know that I made the right one. There’s a huge amount of work involved in moving an entire farm, and I needed to let go of what I could let go for the short-term and put my energies and focus on the long-term. While I miss the milk, and all that I make from the milk (and I do have some stocks of butter and cheese and milk put away, of course, that will last me for awhile), the time off milking a cow will be put to good use as I get my pastures set up, acquire a bull, consider a possible small herd, and create a well-planned milking parlor.

Here, I have the opportunity to create a milking parlor and prepare it in advance. I’ve milked, by hand and by machine, for a good while now, and have the working knowledge to plan a space that I didn’t have when I first brought BP home. I have a barn with water and electric here. I intend to commandeer one of the large stalls, clean it out, furnish it with a milk stand, a work table, shelves to keep various needs. A place to wash my hands, a place to wash equipment, to keep udder wash and udder cream, a cart to carry my milk back to the house, and more. I will have a clean, dry milking parlor, crafted with experience behind me. A year gives me time to put everything in place, and get it how I want it. In the meantime, if I can get set up enough to do it, I’m considering milking one of the goats. Since milking a cow provides so much milk, you kinda lose interest in milking goats. This year off for the cows gives me an opportunity to dive back into goat cheese. My milking machine can be converted to milk goats, so this, too, will be a different experience than I had before (when I hand-milked Clover), and will give me some baby steps along the way as I craft and fine-tune my parlor for the cows.

And so there is the cow situation. I’m committed to my cows, and I can’t wait to get back to milking a cow–and yet I will wait. In the meantime, BP and Glory Bee are eating their round bales, chewing their cud, and growing lazy at Sassafras Farm. BP’s probably going to forget how to work! 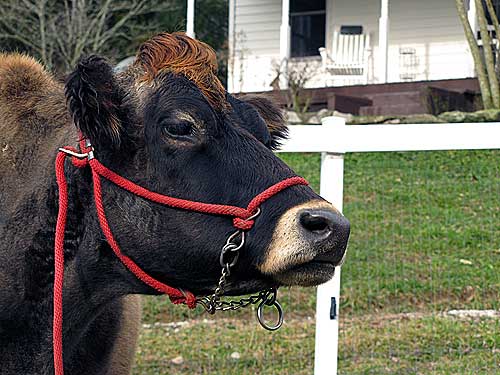