Glory Bee! Not me! (I still have same one, thank you for asking.)

I want to get Glory Bee bred in the late spring or early summer. Cows are pregnant for nine months. Dumplin was born in December, which really isn’t ideal to me, so I want to plan better this next go-round. I’ve been pondering my dilemma for months. Getting a cow bred is always a dilemma! There’s a bull at my friend Sarah’s place, and I could take Glory Bee back there. But I don’t have a trailer, so borrowing a trailer is always part of the dilemma. I thought about buying a trailer, but finally decided against it because I only need it once a year. High investment, low use. Then there’s the whole issue of sending away a milk cow for a couple of months. I don’t really want to send Glory Bee away. I’d have to send Dumplin with her unless I want to wean Dumplin completely, which I don’t want to do just yet. Dumplin gives me “off” days whenever I want. Dumplin is handy! The bull at Sarah’s place might be able to come here, but we’d still have to borrow a trailer and it’s a bit of a drive.

It would be nice to find a bull that is close by, someone who has their own trailer and can move the bull themselves.

There’s only one farm on my road where there are cows. Their cows are often in the road, so you can’t hardly miss them! Ha. But I don’t know these people. I thought often of stopping by and introducing myself, but I’m a little shy. So I called my neighbor Jim who grew up around here and knows everybody. I explained my dilemma. Jim called the cow people and explain my dilemma to them, giving me a sort of introduction, then called me back and gave me the man’s phone number. And I called the man.

And! He said he’d bring me a bull anytime I want, with his own trailer. He’s just about a mile or so up the road. And no charge! This is perfect! (His cows are mixed breed beef, by the way.)

I’m going to start tracking Glory Bee’s cycle The most secure field on the farm is the back barn yard, where I kept Glory Bee for the winter. I have plenty of hay left over. When it’s time, I’m going to bring Dumplin and Glory Bee to the back barn yard and call for the bull. I should only have to have the bull here for a handful of days. I’ll take off milking at that time so I don’t have to try to bring Glory Bee in while keeping a bull out. Then send him away and wait to see if she goes into heat afterward. I can have him back as many times as necessary, but if I’m lucky, it’ll only take once. She’s young and healthy and should breed quickly–if I manage to get her time right. 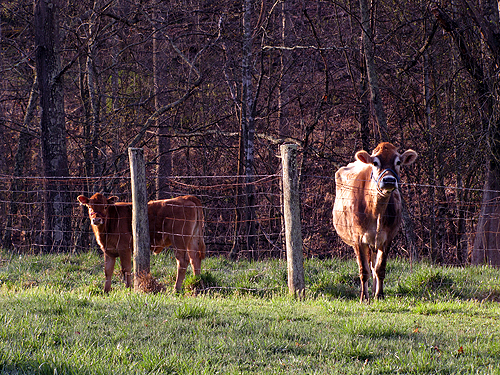 Glory Bee has a date!