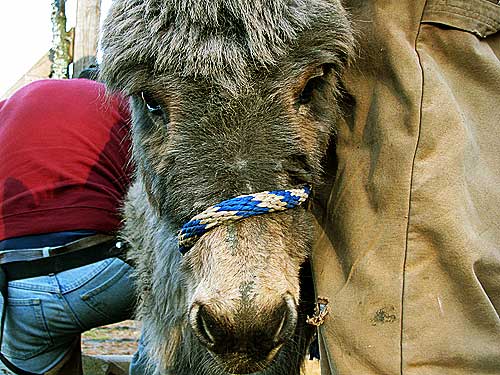 Donkeys, at least mine, are generally calm, happy-go-lucky, cooperative creatures–unless you want them to go somewhere in particular. Then they act like mules. They love people, and get along well with most other farm animals. Unless they find them specifically annoying. Like, say, Boomer. They pass their days in serene acceptance of their superiority and dignity. 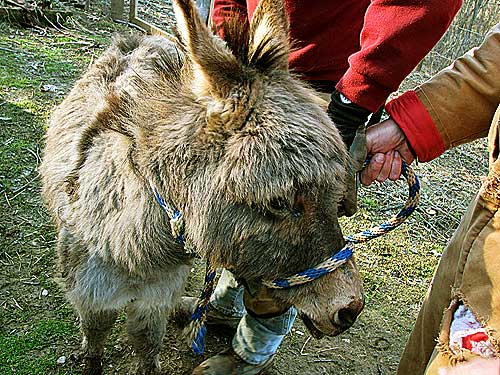 Until the farrier comes to visit.

And then they don’t feel superior or dignified at all.

In fact, they get a little irritated.

Donkeys are smart animals, and they get to know their farrier. Jack has had a long relationship with this particular farrier. He was his farrier before he came to us. They are old friends. 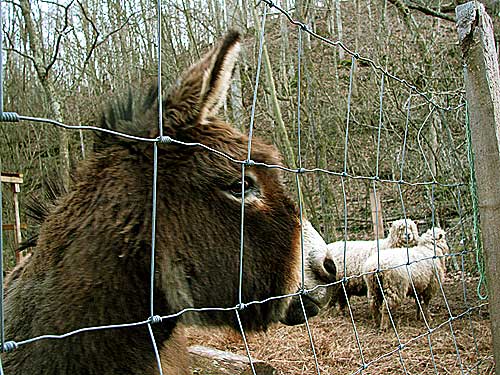 Jack has some special problems with his hooves. He was foundered at some point, which makes his hooves splay out a little. 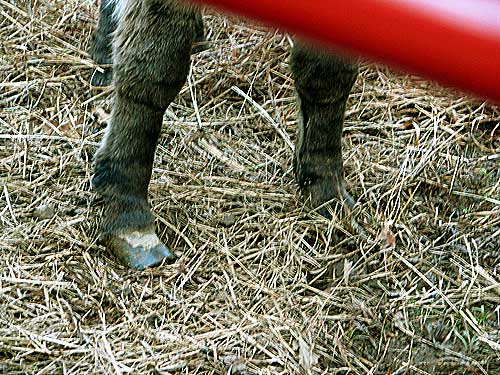 Foundering can be caused by several things, including poor diet or some kind of extreme stress. Jack has been through several owners, and whatever happened to him is so far back in the distant history of his owner rotation that we don’t know. (We plan to be Jack’s forever family!) He is lucky in that his case is manageable. Some animals have to be put down if their foundering is severe. The farrier told us about a horse he worked with that had a difficult delivery after a seemingly normal pregnancy. She foundered so badly from the stress, she had to be put down. 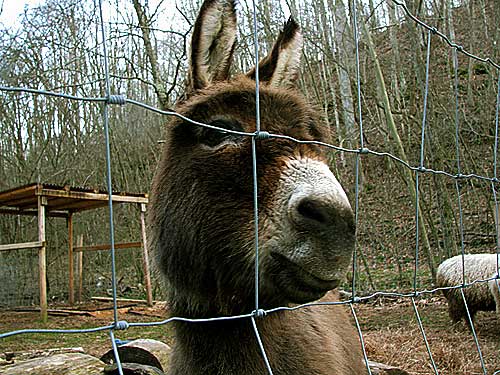 He asks you to love him even though he’s not perfect. 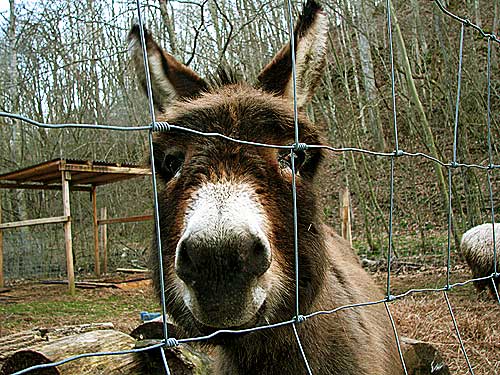 Jack has not led a life of hardship, by the way, so don’t let his Eeyore-eyes fool you. He appeared to be leading a life of pampered leisure when we picked him up and brought him to our farm to make him work with sheep. He probably wishes he could go back to his last home. Well, that’s only because he hasn’t met Poky yet. Once the conjugal visits start up, I think he’ll be feeling pretty chipper! We found Jack through my dear Faye at the little store in town. She called me one day and said, “I hear you want a donkey.” I told her, “I got a donkey.” She said, “You want another one?” And she told me she’d heard about somebody who was looking for a home for a donkey. I told myself I wasn’t going to call, but I did, and then next thing you know, we were heading down the only road I’ve ever seen that is worse than ours. I don’t know why I didn’t have my camera with me that day. Jack was living in the booniest of the boonies–in quite pampered style. They were even having trouble keeping him off their porch. He was perfectly happy living on licorice treats and love, but they couldn’t keep him any longer. They didn’t want to give him to just anybody, though. They came out to our farm to visit and see our goats and chickens and sheep and where we would keep Jack. They’d turned down people before who’d offered to take Jack. We hadn’t had Poky very long and I didn’t really know anything about donkeys, so I was glad we passed inspection and got to have him. You should have seen us trying to get Jack onto the back of the truck into the big crate of pallets we’d prepared for him. We backed the truck up against a bank and they brought Jack around onto the bank. All he had to do from there was walk a few feet across the open tail gate of the truck into the crate. The one thing you can’t do with a donkey is tell them where to go. I think we moved him about an inch an hour. I kept thinking the whole time, WHY DON’T I HAVE MY CAMERA?! Because, you know, there was plenty of time to take pictures while we were inching Jack across the tail gate. Miraculously, we finally got him in there. At least we brought a big enough crate. Someday I’ll have to tell the embarrassing story of the teeny tiny crate we brought with us to pick up Poky and how the farmer laughed and laughed and asked us if we’d come to pick up a cat. Then he built a crate on the spot out of pallets and twine. Because he was a real farmer and real farmers can do stuff like that. That whole thing is just too embarrassing, so forget I mentioned it, but that’s how we learned how to make crates out of pallets.

Poky is just getting acquainted with this farrier and so far they are off to the typically rocky start and she doesn’t really want to be his friend at this point. 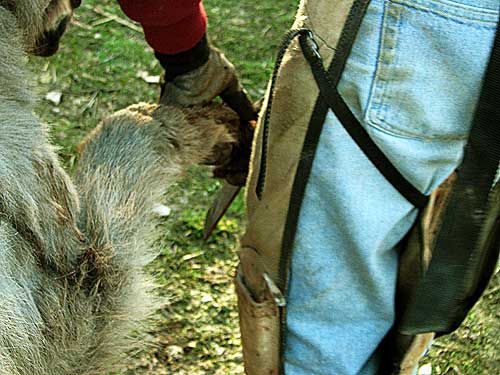 It takes a while for them to get used to having their hooves trimmed when they’re young. The first time he trimmed her, she wrestled him to the ground. 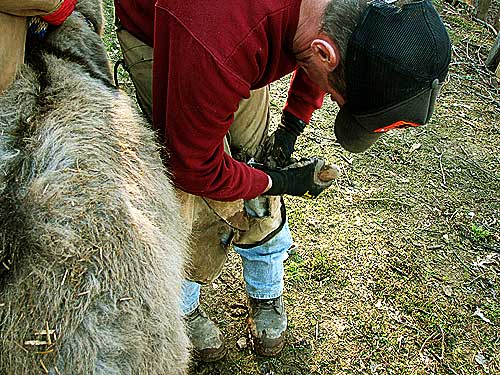 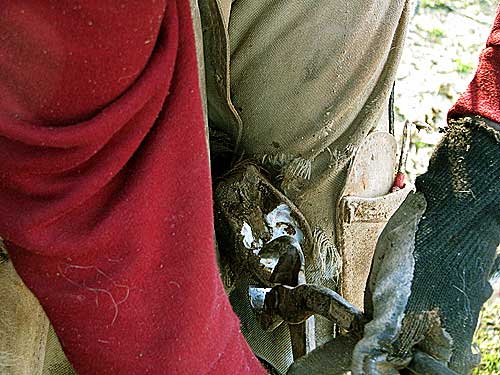 He says that a lot while he’s trimming hooves. 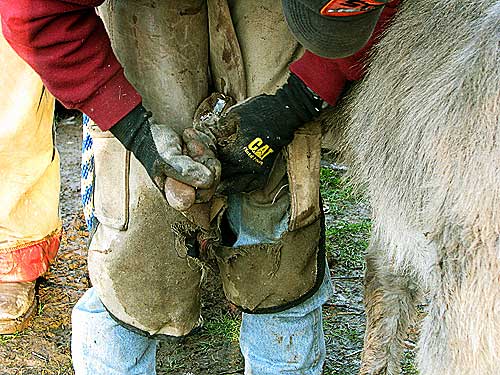 This time, at least, she didn’t wrestle him to the ground, but she wasn’t real happy about the whole thing, either. 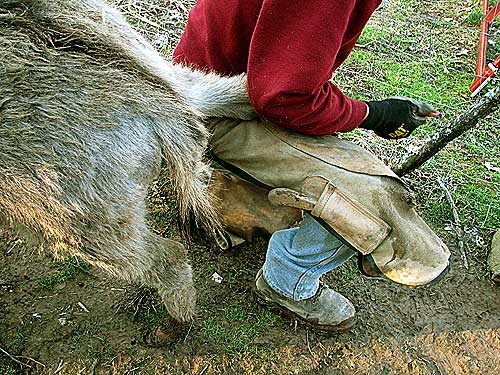 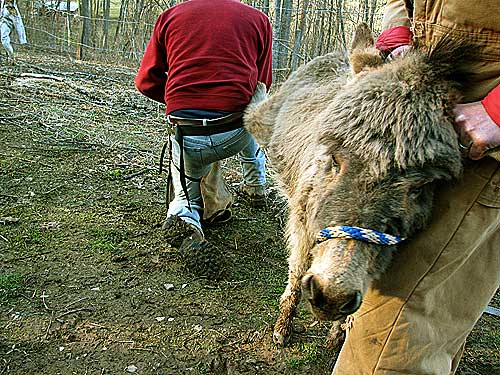 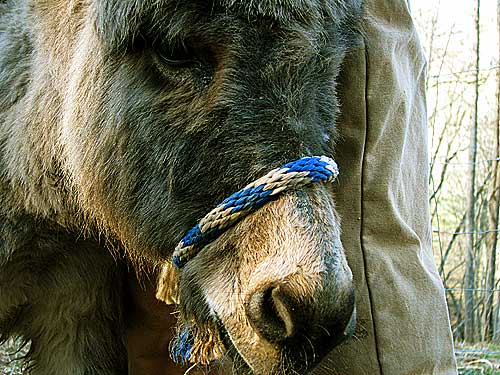 Clover was happy she wasn’t Poky. 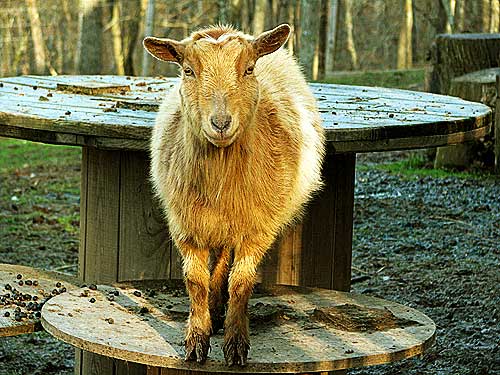 The rest of the gang hung back even further. They didn’t want that farrier person coming near them! 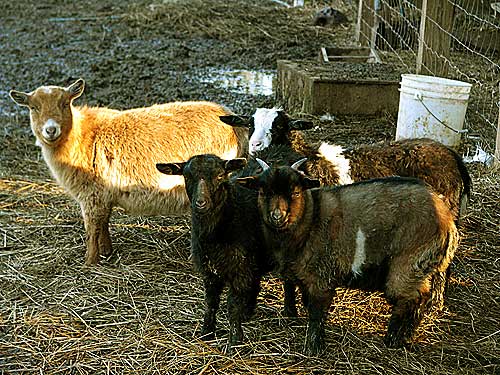 Then he finished, patted Poky on the back and told her she’d done a good job. 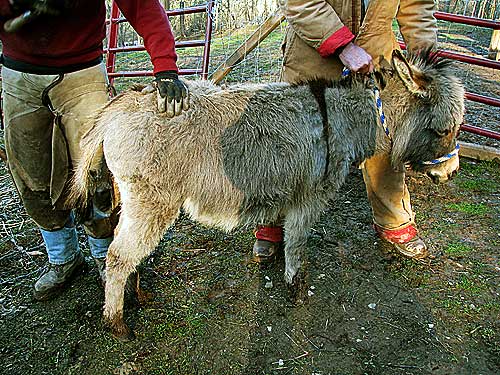 We gave him $50 and a beer. Because that’s how things work around here. He had his wife and little boy with him. I asked him if he was going to teach his little boy to be a farrier. He said, no way! He wants his son to be educated and get a nice job instead of making money getting kicked by horses. He said, “Would you like it?”

Then, to demonstrate, I suppose, he kicked me.

I’M NOT MAKING THAT UP.

Sometimes it’s not a good day to be me, either!