Morgan was spending the night with a friend. Ross got a date. Even though he’s only been here for a couple weeks. (Ross can always get a date.) An evening to myself! I shall relax, I thought. No dinner to cook for anyone. All is quiet on the farm.

I puttered about, relaxing and planning my relaxing. I’m relaxing! I thought I’d post something on my Daily Farm page. (Which I never did.) And have some ice cream. And read. And relax!

I went out early to give the animals their evening feed treat. To further my relaxing. Might as well get my work done early. And relax.

Usually I go to see Patriot first. He’s usually whinnying up a storm and he’s impatient. He knows when it’s evening treat time. But he was quiet, so I fed the other animals first. Chickens, goaties, sheepies, Buttercup the visiting heifer, Jack, Poky. Then off to see the oddly patient Patriot.

He’s always got his head over the fence, waiting for me.

No Patriot at the fence.

I went into the field.

I walked the entire field.

Patriot was not there.

PATRIOT WAS NOT THERE.

I just had this field fenced! Repaired, fixed, corrected, safety-inspected! By an old experienced farmer who knows horses! How could this happen?!

I went back to the house and called my go-to neighbor Jim. His wife told me she’d found horse poop in their driveway.

I jumped in my Explorer and drove out that direction. A couple of girls came by on 4-wheelers. I held my arm out and they stopped. I told them I was looking for a missing horse. They said they’d seen a horse, earlier, but didn’t approach it because they didn’t know if it was friendly or not.

Yep. That’s the one.

It rained this morning.

I forgot what backroad dirt roads are like when it rains. I haven’t been on one lately. I started slipping and sliding. My 4-wheel-drive is out of commission. There was no place to turn around. I kept going for about a mile, clutching the steering wheel at every slide, creeping, crying, telling myself to just go slow, slow, slow. There’s a patch of rocks, drive on that patch. Stay in the ruts! Making promises to myself that I was going to live.

Steep dropoffs, no guardrails. Everything that makes me FREAK OUT. I finally found a place to turn around and got to make the same hellish trip back out.

It was like being back on the road to the old farm when it was snowing or icy. I wasn’t even looking for Patriot anymore. I just wanted to survive and get back home. It was getting dark.

Home, I ran into the house and called the sheriff’s office. The sheriff’s office was closed. HOW CAN THE SHERIFF’S OFFICE EVER BE CLOSED? I called 911 and told them my horse was missing. Then I got off the phone and started crying. It was dark, and I didn’t know how to find Patriot.

The phone rang. It was one of the girls with the 4-wheelers. They’d found Patriot, about a mile and a half away at a farm on a side road. I got back in the Explorer and raced over there. (It was on the hard road, thank goodness.) Patriot was on a farm on a road that branched off my road, up about half a mile. They had a horse of their own, and they’d found Patriot in the road, talking to their horse over the fence, and had brought him in to hold until they could find the owner. The lady said he looked like a really good, strong horse, but he had a lot of old scars on his legs. I told her he was a rescue horse and had had a hard life. “He was found wandering and starving six months ago and a rescue group took him in and brought him back to health. THEN I LOST HIM. HOW CRAPPY IS THAT?!” Then I told her: “I don’t have a trailer, and I don’t think I can walk him home in the dark alone.” A mile and a half is a long way alone in the dark with a stubborn horse, and I was afraid of cars coming by on the road and spooking him.

I had brought Patriot’s halter and lead, but the people at the farm had a halter on Patriot already and said to leave it on, just bring it back. One of the girls started out leading Patriot with my lead, the other following on her 4-wheeler, and me behind her in my Explorer. We were an odd little caravan up the country road. The other horse followed along the fenceline, whinnying all the way, upset over his new friend’s departure. Patriot got stubborn and the other girl left her 4-wheeler and I gave her Patriot’s halter to snap on as another lead so they could double-lead him down the road. I filled their pockets with apple and oat treats, and Patriot clip-clopped along for a mile and a half at a steady, slow pace. It took over 30 minutes to walk him home. I put him in his stall in the barn. 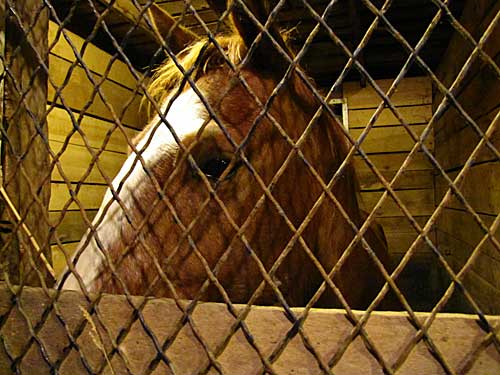 Then I took the girls to the house. I asked them how old they were. They were both 17. I had them spell their names and I wrote them each a check for $100 and took them back to their 4-wheelers. I don’t know where these girls came from. I’ve never seen them before. They dropped out of the sky like horse angels. If I could have given them more, I would have. They didn’t expect anything.

Patriot won’t be going back to that field until we find out where he got out and fix it. All I know right now is, this horse is mine. 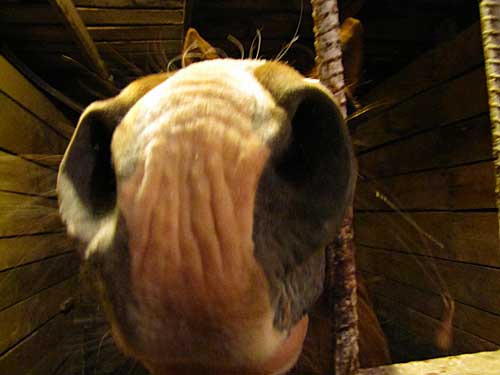 Whether he knows it or not.

And perfect strangers are some kind of miracle.

And now that’s it nearly midnight, I’m going to bed. Like, you know, to relax.