Traffic pileup outside the hay stall in the back barnyard. 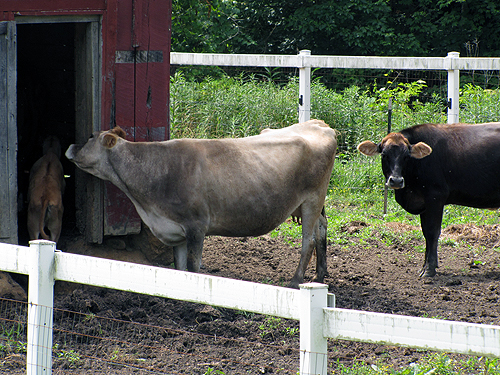 Babies in the way! Here comes one! 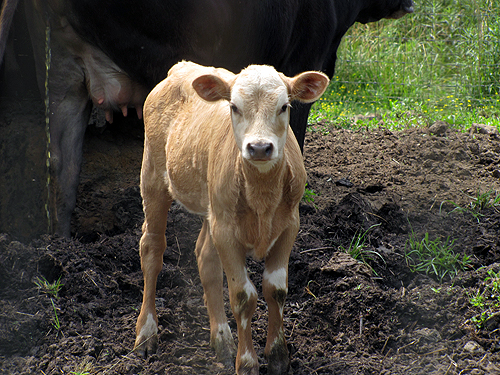 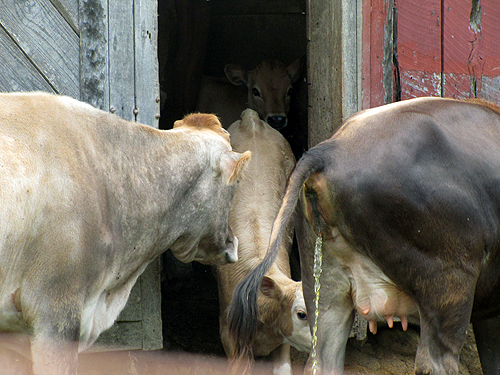 How many different ways can I embarrass my cows? That’s Blossom, with her girly unders exposed to the world, AND she’s peeing. AND–does that look like she has a fifth teat? I must inspect that closer sometime soon! I’m still waiting for Blossom to calve, but she’s got a nice little udder on lately. 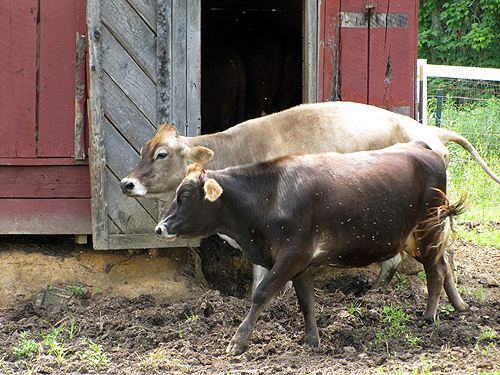 Blossom is a Brown Swiss/Jersey, just like Glory Bee, but she’s still smaller than Glory Bee. Blossom is just a two-year-old, ready to calve for the first time. She should be as big as Glory Bee eventually, though she’ll never be top cow around here–among the cows. That’ll always be Glory Bee, who doesn’t care much for Blossom and often ices her out.

Blossom, blocked out of the favorite stall. 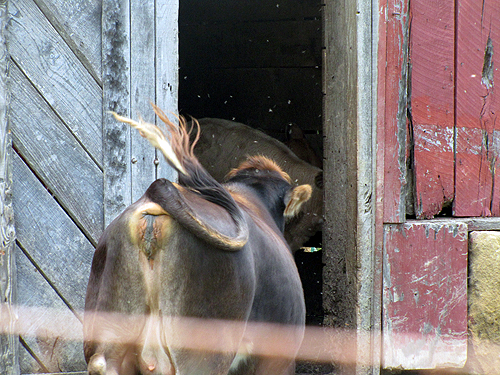 Glory Bee was probably in there telling Moon Pie and Dumplin about her new baby. And I don’t even mean Pumpkin. 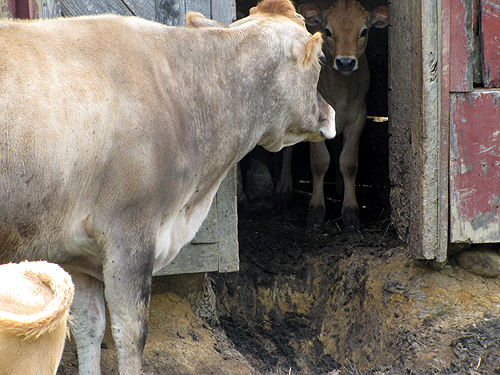 This past Saturday’s workshops included the birds and the bees with the cows as the bull was nose to tail following Glory Bee around all day long, and riding her, and she was standing for him. And even though he’s still young, and a little small yet, he proved he doesn’t need a ladder or even a downhill start to do his job. Glory Bee should be expecting in March!


I haven’t updated about Dumplin because….there’s been nothing to update about Dumplin. She was with the bull last summer during the same period of time as Glory Bee and Moon Pie, who both delivered calves in April. Obviously, the bull wasn’t shooting blanks and he hit them up right off the bat. He was here for three months, so the mystery continued–Dumplin could still deliver in June.

But, the mystery is now solved! And not by a calf.

In order to offer herd shares for raw milk from my cows, West Virginia’s new law requires herd testing for brucellosis and TB. (All cows in the herd must be tested, not just the milk cows.) Along with the farm call charge, there’s an hourly vet charge, so we made a practice run with all the cows on Sunday. Counting calves (who also must be tested), we have nine cows here. Only three of them have ever been in the head lock in the milking parlor–Glory Bee and Moon Pie, who are milked, and Dumplin, who has been taught to get in the stand even though I have no intention of milking her. Blossom, my new Brown Swiss/Jersey, will need to learn to get in the stand on a regular basis, but I hadn’t started her training yet. And, of course, there’s Beau (the Hereford bull) and Bossy (the Hereford cow), who have also never been in a head lock.

Glory Bee and Moon Pie and their calves were eliminated from the practice run. They’re both trained, and calves would have to be tackled anyway because you can’t put them in the head lock. Dumplin was included in the practice run….so she could be checked out.

The first time you put a cow in a head lock is the most difficult. Once they’re in and discover the feed tray, it’s not as hard the next time. However, when we got Blossom in there, she refused to discover the feed tray. She went in the stand all right, but pushed her head under the feed tray and refused to lift it. We finally had to get a rope and pull her head up and shove her forward, but even once she was in the head lock, she still refused to eat anything. We gave her grain, we gave her hay, we gave her time. Nothing. But, she did stand very well. She was cooperative. I decided to give her a check and reached for her teats. My friend Sarah, who I got Blossom from, said she expected Blossom to calve in June. It’s June! And I found there to be milk, lots of it, coming out of her teats. Yay! Blossom should be calving any time now, so we’ll be watching her carefully and keeping her close. But when we brought Dumplin in…. Dumplin has no milk, nothing. If Dumplin was bred from the bull last summer, she should be calving any time now–the timeframe from when the bull was here is running out. Like Blossom, she should have some milk if she’s about to calve.

We ran Bossy the Hereford cow in, with her calf Oreo, and Beau the bull. They were both a little confused, but they cooperated well enough that we were hopeful we could run them all through in under an hour when the vet was here, which was our goal. If we went over an hour running the cows through, we’d be charged an additional fee.

Yesterday afternoon, the vet arrived. It was me, Rodney, and Ross (who is out of the Navy now and home for the summer before he starts classes at WVU in Morgantown) versus nine cows with our hour ticking. We expected Blossom to be difficult, so we started with her. But she surprised us and cooperated, putting her head right in the head lock. 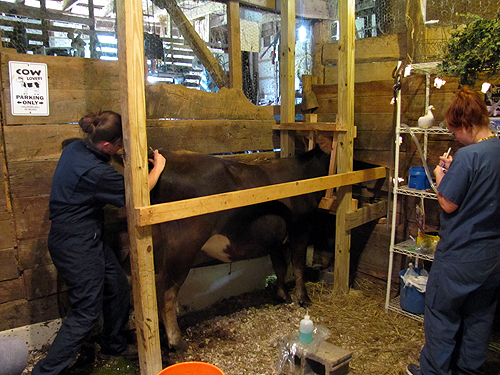 Dumplin was next, and along with the testing, I asked the vet to check her for cysts. Cows can get cysts which mimic pregnancy and prevent them from getting bred. I wanted to know if Dumplin had cysts, which would explain why she hadn’t gotten bred from the bull last summer.

Dr. Katie said she had no cysts.

But! While it’s still too early to be absolutely positive, the vet also said that she believed Dumplin was in the first trimester of a pregnancy. For whatever reason, Dumplin didn’t take on her first go-round with a bull, but she has been bred by Beau the Hereford. We hope. As I said, it’s early, but Dr. Katie believes what she felt inside Dumplin is an early pregnancy. We’ll have to wait and see, but I’m feeling more optimistic about Dumplin now. Based on this timing, she should calve around November, possibly December.

Meanwhile, we still had seven more cows to run through. We brought in Glory Bee next expecting her to be one of the easy ones. Well, she does go into the head lock like a breeze! But she was in the stand longer than any other cow yesterday, proving herself to still be the bad baby, a spoiled brat, a troublemaker. The vet needed to take a blood sample from her neck, and Glory Bee moved her head back and forth in the head lock, making it nigh upon impossible. She was in the stand nearly 15 minutes, ticking away our hour while she said, no, no, and no. It took a rope to hold her head in position and finally finish her testing.

Pumpkin, her calf, hadn’t run in with her (as we’d been hoping) so we hoped both Pumpkin and Gingersnap would run in with Moon Pie, who likes to mother the both of them.

Moon Pie, the baby stealer, with Pumpkin and Gingersnap. 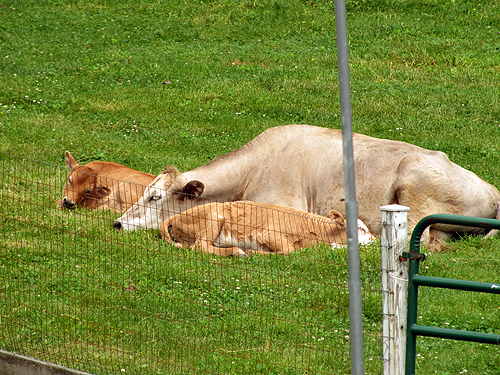 But alas, Moon Pie had been exposed to another calf–Oreo. She hasn’t been in the field with Oreo in some time because the milk cows are mostly kept separate from the other cows. Moon Pie said, “I need to get to know this other baby so I can steal her!” and brought in Oreo with her instead of Pumpkin and Gingersnap. We got Moon Pie in the stand and she cooperated quickly as I anticipated, then poor Moon Pie had to remain in the stand while Oreo was tackled in the corner behind her by Rodney so the vet could administer the tests to Oreo.

We got Oreo and Moon Pie out, and brought in Beau. He was cooperative, and in and out fairly quickly. It took a bit of convincing to get Bossy the Hereford cow to come in, but she was in and out faster than Glory Bee, that’s for sure.

And then we were left with Gingersnap and Pumpkin, who led us on a merry chase around the back barn yard until we finally got Gingersnap cornered and herded in then Ross tackled Pumpkin and carried her in. I’m not sure we can allow Ross to go to college–he’s too handy.

The vet will be back on Wednesday to lift their tails to see if they have any reaction to the TB test, then we’re done. We probably won’t even put most of them in the head lock for that, depending on who cooperates with having their tail lifted while standing in the barn.

How did we do on our time? When it was all done, the vet’s assistant checked the time and we’d run through nine cows/calves, who mostly had never been in a head lock before our practice run and including mama-raised calves who required tackling and one six-year-old bad baby, in under an hour, with nearly 10 minutes to spare!

Dr. Katie said we were her new favorite people! Because not only did we actually take her advice and practice ahead of time, we didn’t even ask her to help. She said most of the time, she arrives at a farm and people expect her to get the cows! (Expecting her to get the cows in the barn never even occurred to me.)

Now we wait for the results, which have to be sent to the state before I can be approved to offer herd shares at Sassafras Farm. I’ll keep you updated.

Got cows? Then you’ve got milk! And the baby doesn’t need all of it. You could use the original cow milking system….you know, your hands. After all, hand-milking is a low-tech operation. You need hands and a bucket. Clean up is as easy as putting the milk bucket in the dishwasher. But milking the cow…....
Read More

Remember the white Pekin mama who lost one baby then trampled another? (See here if you missed that one.) I took the four babies she had left and put them in a pen for safekeeping, along with seven Blue Swedish ducklings I’d gotten from a hatchery. She wouldn’t leave them. She was dedicated, committed, obsessed...
Read More

I love duck eggs. They make a great fried egg, and they’re awesome for baking. Duck eggs are huge, super jumbo size. I buy special dinosaur egg cartons for them, and I sell them when I have enough. I don’t always have enough because they hide them. The ducks are free-ranging, so they make their...
Read More