Some chickens were harmed in the making of this post. Don’t continue if you don’t want to see some pictures that might include dead chickens.

On Saturday, we butchered nearly 30 jumbo Cornish crosses. This is the first time we’ve done the jumbo Cornish. They are advertised as ready to butcher in 6 to 8 weeks, at which point they should dress out at 3 to 4 pounds. We butchered at 7 weeks. Here’s the good and the bad report, and lessons learned. 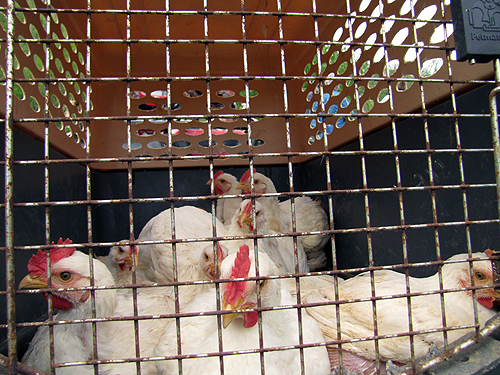 We got the chicks in March. We still had a lot of cold weather to come, and I don’t want to run a heat lamp in the barn due to the risk of fire in that situation, so we kept them in tubs in the cellar where there is a gas wall mount stove and we had overhead lights to give them light. They were warm enough in there, but due to their fast growth rate, they quickly outgrew the tubs, far more quickly than I anticipated. (Far more quickly than normal growth rate chicks would have outgrown the tubs.) Hey, when they say these chicks grow fast, believe ’em! Despite the fact that they had plenty of light and warmth, they were piling on each other due to the close quarters. When chicks pile on each other, they’ll smother or flatten each other. We lost a couple chicks, so we moved them to the barn, deciding–six of one, half a dozen of the other–might as well move them to the barn and give them more space if they’re going to pile on each other. In the barn, they had lights, but no heat source, so the piling continued despite the larger space and we lost several more. But we would have lost several more if we’d left them in the close quarters of the cellar in any case. In the end, we lost seven chicks out of the 35 and took 28 to butchering day. I’ll take the blame for the 7 losses–I shouldn’t have gotten chicks in March if I wasn’t going to put a heat lamp in the barn. Their growth rate was non-functional for keeping them in the confines of the cellar. Lesson learned! Next year, I won’t get meat chicks until late May or early June when the nighttime temperatures are warm enough to keep chicks in the barn. 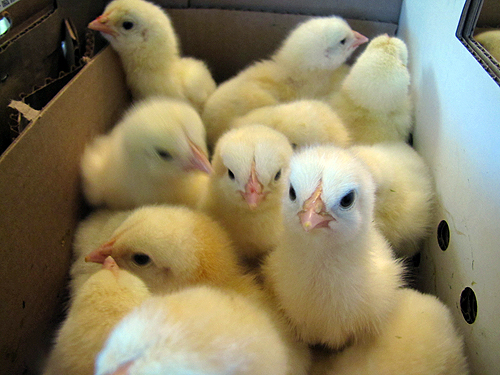 We fed the chicks according to instructions. They received a special supplement that went on their feed the first day and a booster that went in their water daily. They were vaccinated at the hatchery and fed organic starter (non-medicated, because a medicated starter will nullify the vaccinations) then put on a broiler feed formulated for meat chickens after the first three weeks. At 10 days, you’re supposed to start taking their feed away at night to prevent them from growing so quickly that their pounds outpace their bodies’ ability to support them. This can help prevent leg injuries as these chickens are prone to splayed legs due to their fast growing breast size. It’s absolutely true what they say about these chicks–they’re sluggish, lazy, and interested in moving only to get to the food. Mostly, they didn’t even bother to run away from us when we’d go in to change their water or give them more feed. They definitely didn’t act like normal chickens….until butchering day. We took their feed away on Thursday night in preparation for Saturday morning slaughter. They had plenty of water, but no food. By Saturday morning, they were pretty rowdy, let me tell ya! I opened the stall door on Saturday morning and one of them actually flew up at me! In seven weeks, I’d barely seen them move, much less attempt to fly! Hunger made them a bit rapid, shall we say.

They had barely finished feathering out, by the way. They did lose their baby fluff and begin feathering much earlier than normal chicks, which results in a bare back look for a few weeks as the baby fluff falls off quickly and the feathers develop. They were fully feathered on butchering day, but those feathers had just come in, and they came off very easily, which was a plus.

They dressed out, after fully processing, to just over 3 pounds at 7 weeks, which is pretty amazing for 7 weeks and was within the 3 to 4 pound range advertised. The next batch that’s coming the third week of May will be raised for 9 weeks, and we’ll see what the difference is in the dress-out weight at that point. Because we’ll be starting them in warmer weather, that should also impact their final weight. It’s not recommended to keep jumbo Cornish longer than 9-10 weeks because of leg problems or heart attacks, so we’ll see if we lose any because of those issues in this next round.

Overall, despite some problems (and mistakes), we were really pleased with the jumbo Cornish and will continue to raise them. 1) The fast growing time. It’s a pain to raise chicks. I like raising them for a shorter period of time. Less work! Regular Cornish crosses have to be raised to at least 12 weeks to butcher. 2) The meat is young, tender, juicy, and they really do pack on the pounds in a short time span. 3) The butchering process was easier. (Hide your eyes if you can’t handle this part.) They struggled less at butchering. (Didn’t have to worry about them running around like, uh, chickens with their heads cut off.) Their feathers–which had just barely grown in–loosened quicker in scalding. They plucked quickly in the plucker–and made less mess to clean up because they didn’t have as many feathers as a chicken that was older would have had.

Saturday was a butchering workshop, and we had a full class of 14 people here to learn. We had stations set up and attendees could go through and do each stage in the process twice. They were an enthusiastic bunch, and all but one of them did their own chicken throat-cutting. (And even the one who didn’t cut a chicken’s throat did go on to do everything else.) Rodney manned the killing station, which was an upside down traffic cone screwed to a fence post with a bucket under the cone to catch the blood and for the heads. 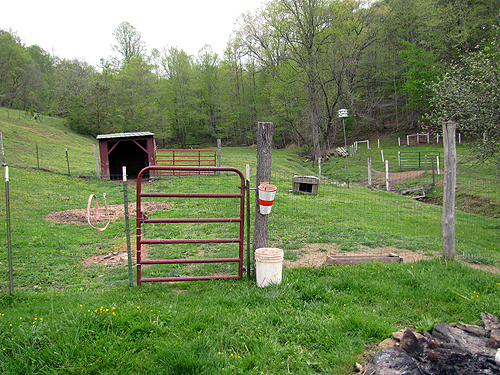 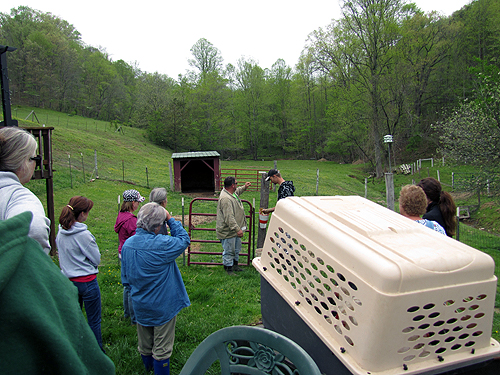 I supervised the scalding and plucking stations. The scalder was a propane-heated turkey fryer. 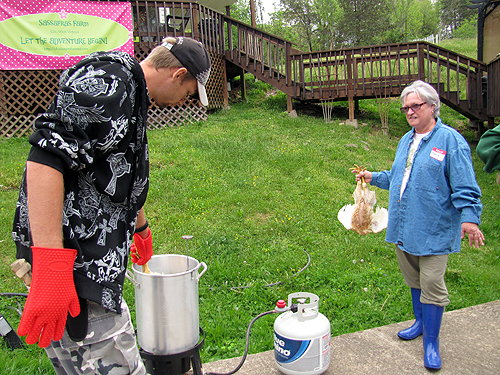 The plucker was an electric tub plucker (EZ Plucker 1-2) from Murray McMurray Hatchery. 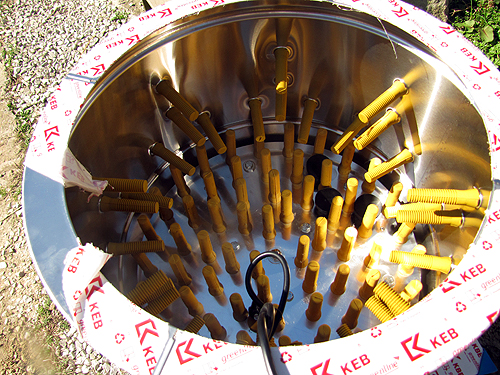 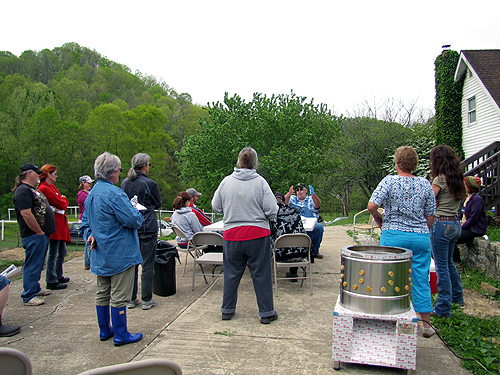 My cousin manned the cutting table. (In this photo, it was before we started butchering and he was giving some instructions on the cutting process and knife work before we got started.) 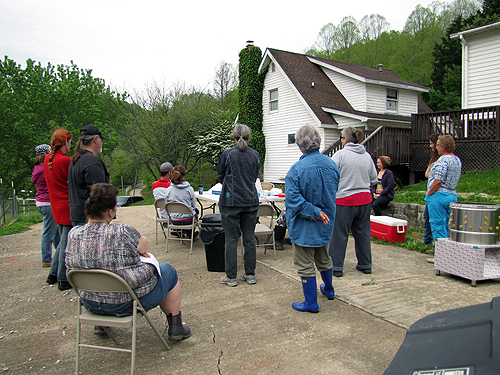 We started butchering around 10:15 and had 28 chickens fully processed by 12:15. The chickens were vacuum packed and put in the freezer. Every attendee took home one chicken. In the afternoon, we did pressure canning with chicken, and everyone made egg/garden wood and wire baskets. (The chicken that was used for the pressure canning class came from the old roosters we’d butchered a month ago. That meat would be tough, so it fully benefited from the pressure canning process. I wouldn’t want to can any of the tender jumbo Cornish!) It was a great day, and I was happy to have so many genuinely enthusiastic people here who were serious about learning to provide their own meat. There were far more women here than men. One told me that her husband always did their butchering and she wanted to learn to do it herself, she was done letting the men do it and just bring her the chicken to cook as if that was all she could do! And she added that she really appreciated the opportunity to learn it from another woman. People came in twos and threes, and some people came by themselves, so don’t think you need a partner to come with you if you want to learn when we do this again on July 30. Trust me, when everyone’s killin’ chickens, everyone becomes friends fast! It’s definitely an experience!

P.S. Not into butchering chickens? I have other workshops! See my Retreats & Workshops page.


We were out yesterday afternoon and came home to find Glory Bee hiding down by the creek. Of course we had to stop and check on her, and found her with some new company!

Glory Bee is a third-time mommy, and pretty relaxed about the whole thing. She let us get the baby down on the ground and check things out. 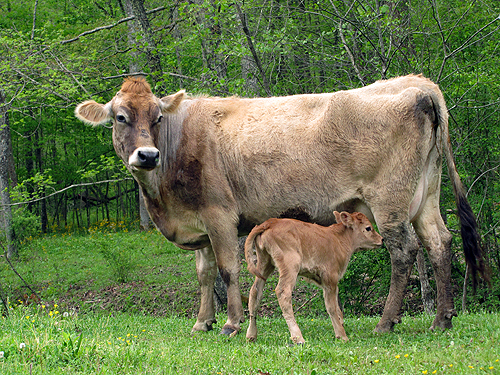 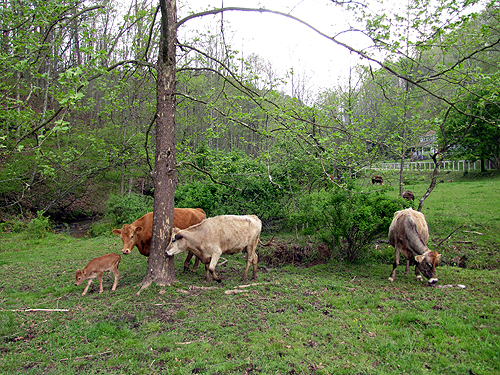 Glory Bee was still trying to take care of the afterbirth, but finally decided to take off with her baby because she’d had enough of this big kafluffle. 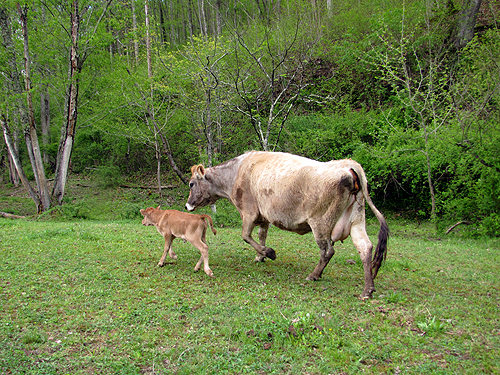 Moon Pie is a first-time mommy, and nervous still. She mooed and mooed, wanting to go with Glory Bee but not wanting to leave her baby napping across the field. It took her about another 10 minutes to get the babies up, running back and forth across the field to rouse them. Meanwhile, Glory Bee went back to finish the afterbirth–a buzzard flew overhead and she was having none of that! Nobody was getting her afterbirth! And everybody settled down, including Moon Pie. The new baby is up and sucking, and Glory Bee is back on the job, ready for milking and performing at workshops again! And, in keeping with my cookie theme for this year’s girls, the new lil heifer’s name is– 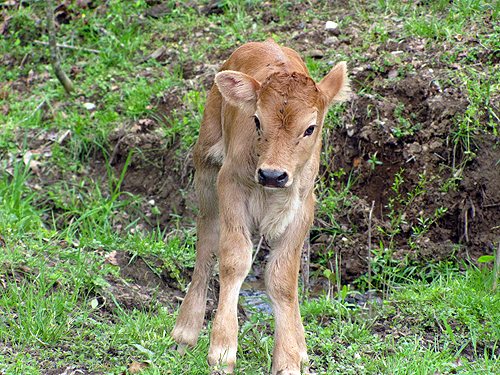 P.S. What kind of mommy will Dumplin be? Nervous? Laidback? 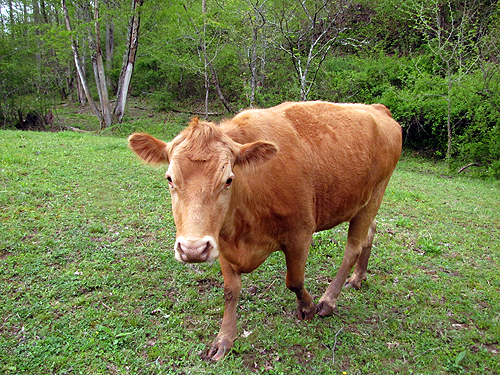 I don’t know. DUMPLIN, WHY DON’T YOU HAVE IT ALREADY?

In other words, I’m milking Moon Pie. First, I have to separate baby Gingersnap from mommy. Baby Gingersnap doesn’t like this part. Moon Pie thinks she has a babysitter, so she goes out shopping. And everything is fine for a while, until she realizes THE DINGO STOLE HER BABY and she has to stand in...
Read More

It snowed all day here on Saturday. April! Really??? Then Moon Pie sneaked off to the back of the upper pasture on Sunday morning to make something. Things are happening according to plan, except for the part where she had her baby in a back field. It’s April, time for calves, so I was trying...
Read More

Here she is. And look what she brought with her! A baby. And it’s a lil heifer. This cow is a Hereford, like Beau the bull, and the baby is half Hereford, half Angus. Glory Bee isn’t sure what to think about all this. She has so many new friends! “When is this going to...
Read More