There are two disconnected, but useful, fenced fields on Sassafras Farm. In previous pasture tour posts, the Lower Fields and the Upper Fields, I posted about the connected fields from the barn yards out to the upper pastures. These fields aren’t connected and can’t be connected–but they offer more purpose and value than the disconnected third upper field (the one that is separated by the ravine and can only be accessed by the road, and a “fur piece” up the road at that). The two disconnected fields I’m going to show you in this post are lower fields, just not part of the connected lower fields.

Here is the first disconnected lower field. I call it the horse field because of the long line of tall white horse fencing running along the road. Here you can see where it is in relation to the house. 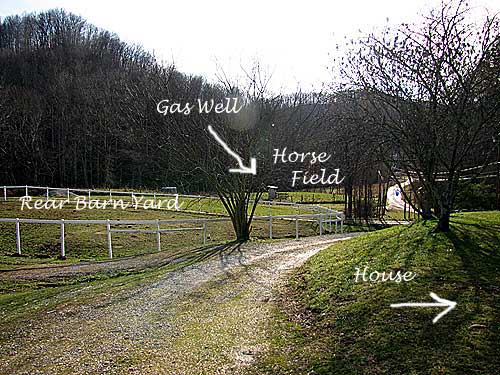 The gas well is in that field, as you can see noted in the photo. It’s not far from the rear barn yard, and would make a useful field in which to keep a milk cow with handy access back to the barn. I wouldn’t want to keep any of the smaller animals there for several reasons including the lack of fenced access to it. Any of the larger animals that can be easily led, such as a milk cow or a horse, could use this field.

My farm begins where the white horse fencing starts along the road here, and it’s an easy identifying marker when I’m giving people directions. 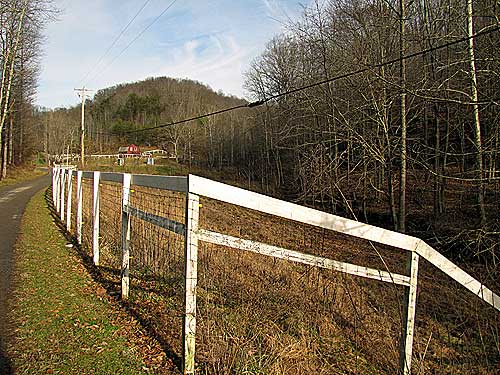 This field has a weird gate that looks kinda rickety, and obviously smaller animals could walk right through it. Even for larger animals, I’m afraid they could push it down. It will need to be replaced. 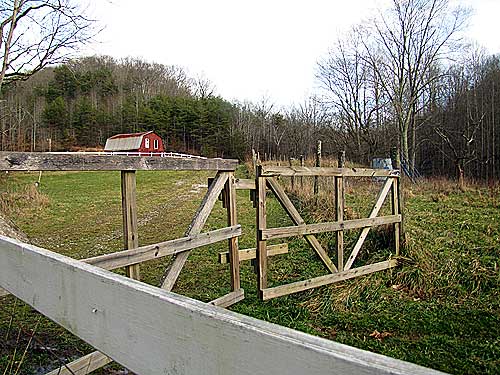 I haven’t walked the fenceline in this field and I’m not sure how far up the adjacent hillside the fencing goes, but like the upper pastures, it’s probably going to need some fence repairs. There is a creek in the field for water.

They were mowing the first part of the field, but not the rest, so it’s mostly in a state of neglect. 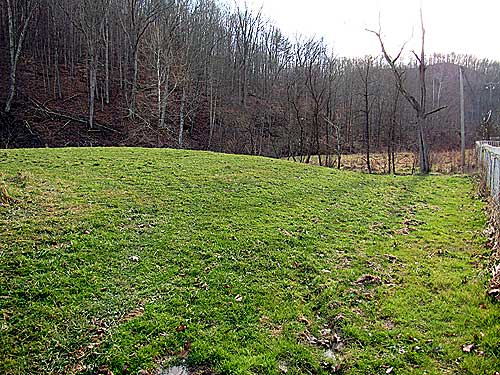 However, it is a large and lovely field, not too far from the house and barn. So why don’t you connect the fencing, Suzanne?

Let me show you.

Right-of-way access roads are fairly common in West Virginia. (Not sure about other states.) Sometimes people own property that has no direct access to a road. This often happens when large acreages are split up, sold off, or divided within families, and the situation can go back many decades (or longer). At some point in time, right-of-ways are established and are put in the deeds. There are two right-of-ways on this farm. 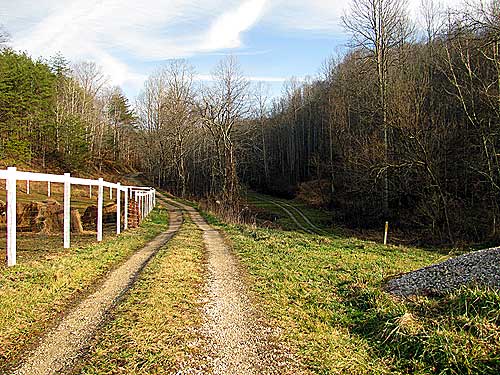 The road to the left goes to a house with a few acres way, way back in there. The previous owners told me they were quiet and they never saw them except when they were coming and going. I’ve met them once. The day I moved in, their dog killed one of my chickens. I got in my car, drove down the access road, and found their house. I knocked on the door and said, “Hi, I’m your new neighbor. Your dog killed one of my chickens.” This is not the optimal introductory conversation. Then I said, “Your dog can never come back to my farm.”

In the country, when you string a couple of sentences together like, “Your dog killed one of my chickens,” and “Your dog can never come back to my farm,” everybody knows what you mean and you can go on to say things like “Nice to meet you,” and avoid unpleasant specifics. It’s code language that puts everyone on the same page. I have never seen the dog again, which I (and the chickens) appreciate. And as the previous owners said, they are very quiet and I only see them coming and going.

The other access road goes to a cabin way, way back in there. I haven’t been there, but I’ve been to the gate where the property begins. I have met the owner. His name is Hokey. (You can’t make this stuff up.) He comes out here to hunt occasionally. The first week I moved in was the start of deer season here. I saw him in his orange jacket hunting on my property from my front porch, and we had an altercation when I asked him not to hunt on my farm without my permission. I have animals and children here. He told me that where he was hunting was his property and spoke to me as if I was a stupid little woman. This farm goes to the ridges all around. I emailed the previous owner and described where he was on the property (above Blueberry Hill). The previous owner’s response was, “If you can see him, he is on your property.” He went on to say that Hokey had tried the same thing with him when they first moved in, and they had to put their foot down and set him straight.

I called Jim. Jim is the dad who scoops up the kids and takes them to the church up the road so the bus doesn’t have to come all the way down the road in bad weather. He has three daughters, and one of them is Morgan’s age. For the first time in ever, she has a friend in walking distance and she has already been enjoying that. When we moved in, Jim brought us a pumpkin roll from his wife and fireworks. (I can’t explain the fireworks. This is the country.) He lives up past my farm where it turns to a dirt road. I told Jim what Hokey had said and described where I saw him, and Jim said, “I’ve lived here all my life and I know where your property lines are. He was hunting on your property.” And he told me to call him in the spring and he would walk my property line with me, and told me to call him if I ever have a disagreement with Hokey again and he will stand beside me while I set Hokey straight.

Luckily, Hokey’s not out here too often, but I will have to deal with him at some point and let him know that I may be a little woman, but I am not stupid.

Since this pasture tour post is a sub-post on my new neighbors, another wonderful neighbor who lives out the road is named Andy. He is just as helpful as Jim–both of them came over to the house the week I moved in to introduce themselves and give me their phone numbers should I ever need their assistance. Andy is the one who stopped on the road and pulled the truck with the flat bed trailer full of round bales out of the mud that day.

Back to the pasture tour! Between the access roads is usable land. It’s a relatively flat location. There is quite a bit of land all up along and between the roads. I have thoughts of planting fruit trees there, and possibly also establishing a garden space there. 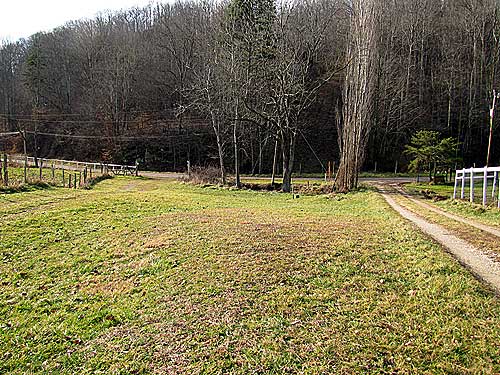 It’s sunny and handy to the house. 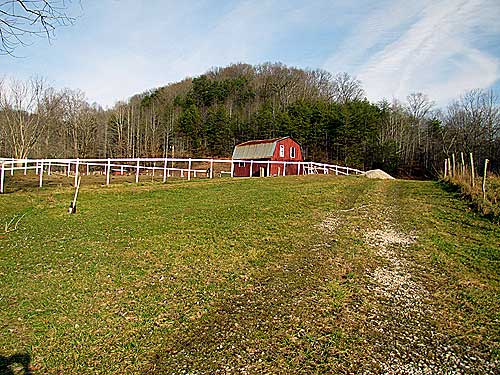 That pile up there you can see sitting between the access roads is a pile of gravel for the driveway that was left here by the previous owners. Maybe I can incorporate scooping and grading the rock on the driveway as part of my tractor lessons.

The other disconnected field is across the road (the “real” road). You can see the proximity to the house–this photo is taken from the front porch. 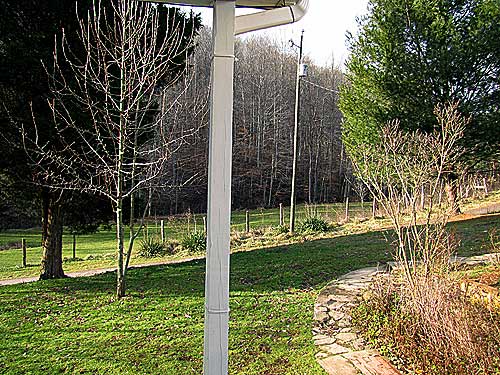 I call this one the bee field, not because I intend to keep bees in it, but because I’m thinking to place hives in the unfenced area adjacent to it. There are fence posts there, but no fencing. 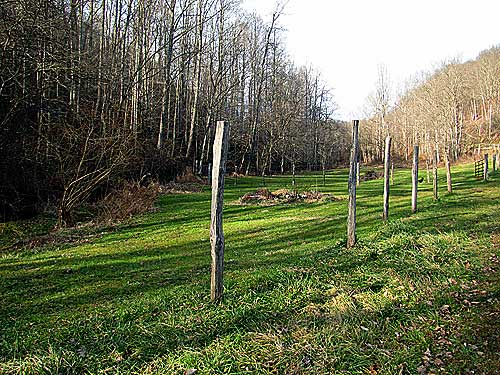 I could also plant some flower gardens over here, and along with the gardens around the house and the fruit trees and vegetable garden across the road between the right-of-ways, there would be handy access for the bees. It’s close to the house–but not too close, and away from the animals. It’s also an eastern exposure, which is supposed to be better for bees. (I’m going to a local bee class starting January 21!) 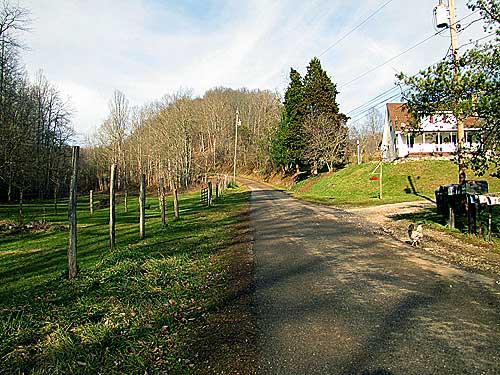 Back to the actual fenced field: 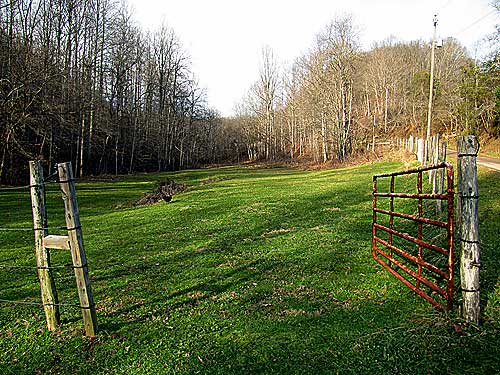 This is a beautiful and spacious field, goes way back in there. It would be suitable for a milk cow, easily led across the road to the barn and back. 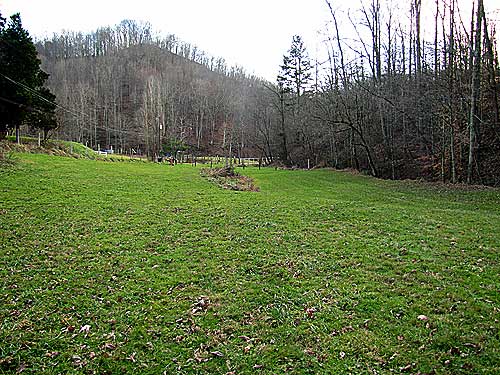 The fencing here is mostly woven wire. I’ve walked this fenceline. It goes some way up the hill, and is down in several places, so repairs are needed. There is a creek in the field for water. 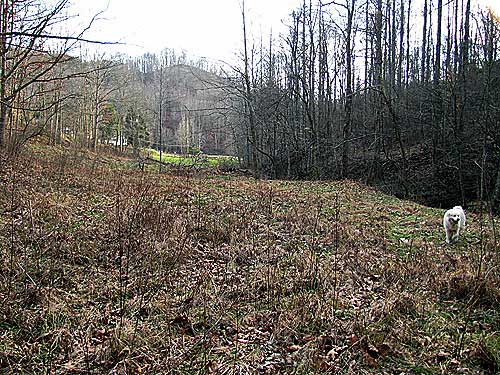 The first part of the field has been mowed and maintained. The areas to the back have been neglected, but can be brought back in time.

And that’s it! The pastures of Sassafras Farm absolutely awe me. I’m not accustomed to this amount of pasture, and the work to bring them back, make repairs, is overwhelming, but I intend to take it one pasture at a time, learning about fencing and the tractor as I go. Yes, I’m determined to learn about fencing, too, and not be so dependent on help, especially when it comes to repairs.

Because I’m a little woman, but I’m not stupid!