Patriot will be here this afternoon. Yesterday, I took Morgan to the little store in town to pick up her saddle and other equipment and supplies. She’s been saving her money. Not that she saved enough, so I had to help her. Morgan’s money tends to fall out of her pockets. Usually while she’s standing in a bookstore.

She had fun picking everything out. Tim, the owner of the little store, helped her with a few things. 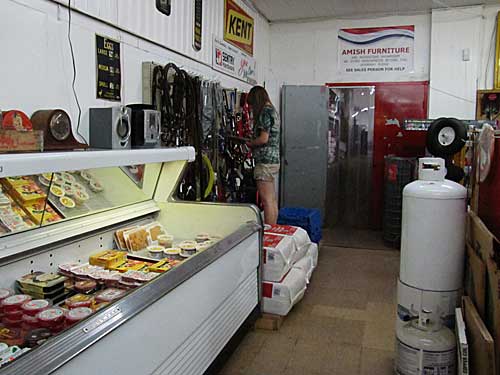 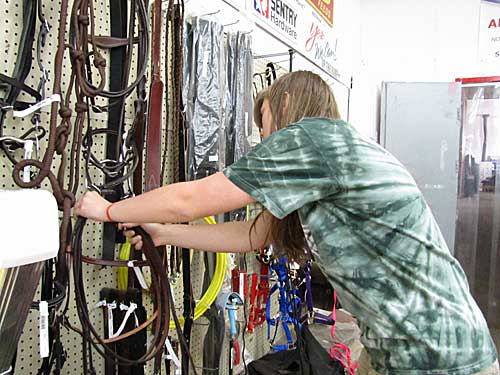 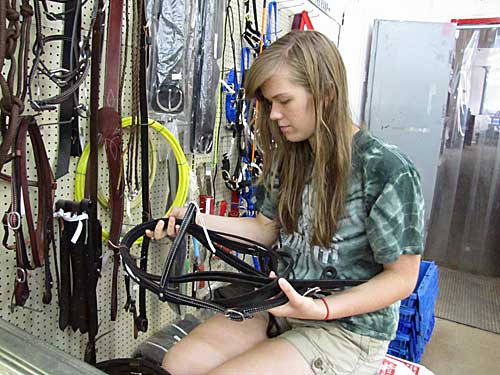 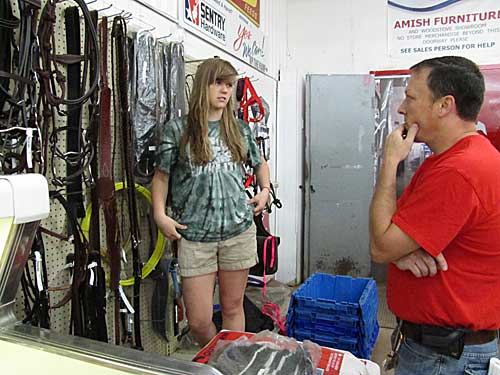 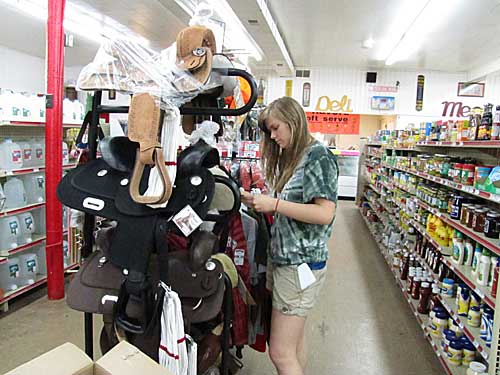 After we got home, she spent most of the rest of the day riding the couch. 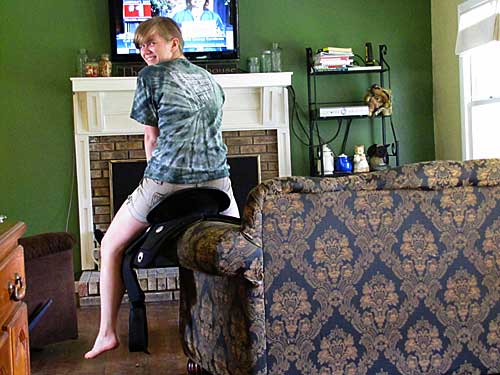 (A number of people asked about a helmet. Yes, she is getting a helmet also. I will be picking that up today at another store.)

Meanwhile, so many coincidences falling into place. As I posted yesterday, the previous owners visited this weekend. In our conversations, I found out a few things, including that there is someone nearby here (just a couple of miles away) who gives riding lessons. I’ve been wanting to find someone who could come here to the farm for lessons, so this was exciting. They also have a hitch wagon they take places to give rides, and I promptly hired them to bring their horses and wagon to this year’s Party on the Farm! (Won’t that be fun?!) Along with a hitch wagon, they also have a wedding carriage, and I talked to them about collaborating on wedding events at Sassafras Farm. (Could a wedding at Sassafras Farm be any cuter? Now I can offer a carriage to bring the bride down the road and up the drive!)

The previous owners also told me about a horse neglect and abuse case that occurred here on this farm in 2006. A veterinarian (at North Gateway! the animal shelter where Coco is right now! and NO, she is no longer a vet there) who leased this farm at the time had 13 horses seized. At one point, she had several dozen horses here, which is far too many horses for the fenced pasture, and they were being starved. There isn’t enough stall space here in the barn for that number of horses to be sheltered, and when I called Jim, my neighbor, he said he’d known of at least three horses that froze to death here over the winter of 2005-2006 and were hauled up the hollow on the farm and dumped. I remember that winter–I had just moved to West Virginia and the temps hit zero multiple times. It was quite cold in the slanted little house that winter. The vet was eventually evicted from here (for non-payment) and the horses were seized from a nearby 6-acre farm, shortly after she moved them off this farm. You can find the story here. Some of those horses eventually found their way to the Heart of Phoenix Equine Rescue, which was founded in 2007.

At first, this whole scenario felt a little weird and creepy, knowing it happened here on this farm. She lived in my house, cooked in my kitchen, sat on my porch, starved horses in my fields, and dumped them in my hollow. But then it felt somehow very right after all. The farm has come full circle as today, I adopt a rescue horse. (By the way, see my story today about the Heart of Phoenix Equine Rescue in the Charleston Daily Mail here.)